Tang Dynasty Show is a Music & Dance Dinner Show in Tang Dynasty Palace of Xian known as the premier pseudo-classic show in China with 1,000 years of history.

Tang Dynasty Show in Xi’an, also known as the Music and Dance Show, is the performance of several traditional, ancient dances, and music of that time, which is just after a banquet. You can see the show in several theaters and restaurants, but the best place to catch it is perhaps The Tang Dynasty Palace (Tang Yue Gong). This dance and music belong to the golden ages of Chinese history and during the years between 618-907, the reign of the Tang Dynasty with might, glory, and prosperity.

The Origin of the Tang Dynasty Show

Most of the ancient dances were made in forms of rituals or prayers. As for the dances included in this show, not only they have roots in Chinese lore, some of them were designs of their emperors. The music of that time is also a wonder in its own terms. Since the Tang Dynasty was open to outsiders, the music and the songs (as well as their other forms of art) are integrated with foreign instruments.

Whether you are there to just catch the Tang Dynasty Music and Dance Show of Xian or you wish to have dinner along with the show, Tang Dynasty Show will be an excellent representation of a small part of the rich Chines culture. You will see elements of their culture and learn a bit about their history and lore.

History and Reason Behind the Xian Tang Dynasty Show

The roots of the show come from the Tang dynasty, as was mentioned. Their capital was the city of Chang’an (Xian), and during their rule, China had a long time of peace and prosperity. Because of this, their art advanced in many areas. Open borders to their neighbors and prosperous times were the reason for their many festivities and celebrations, which has led to the iconic shows of today. In their ancient times, they developed dances as prayers for a good harvest and the fine leadership of their rulers.

Because of their exotic nature, this show and other dance and music shows started to rise in the 1980s, which attracted many eyes in the tourism industry of China. On the year 1988, the Tang Yue Gong or The Tang Dynasty Palace started their work with this iconic show and attracted even more visitors to the beautiful city of Xian.

The Music and Dance Show has 8 highlights including dances along with music and songs of the same era, which are performed by the finest actors, dancers, and musicians of Xian. These shows include Welcoming the Emperor, White Linen Dance, Da Nuo Dance, Rainbow Dress, and Feathered Garment Dance, King of Qin Dance, Spring Outing, Oriole Singing in Spring, and Ta Ge (stepping song) Dance respectively.

You can enjoy your dinner at the Tang Yue Gong as you also enjoy the Tang Dynasty Show. The dishes included in the banquet can range from the most luxurious and royal cuisine of that era to other varieties of traditional foods such as dumplings. The hall for the banquet and Tang Dynasty Show has an area of about 3,230 square yards (2,700 m2), which can hold approximately 650 guests. In any case, you may need to book your stay before visiting.

Welcoming of the Emperor

In the first part of the show, the entrance and Welcoming of the Emperor along with his foreign guests as well as the government officials is recreated. This celebration was done originally by the people cheering their entrance to the palace, along with playing thousands of instruments.

After this part, the White Linen Dance takes place, which belongs to the Jin Dynasty originally. During this part, the performers wear white dresses with long sleeves that are waved in the air as part of this dance.

Next comes the Da Nuo dance that is rooted in ancient legends. It is said that this dance is a simple form of movement that is done to drive away evil spirits and bad luck.

During the fourth part, Rainbow Dress, and Feathered Garment Dance, performers wear colorful and special dresses for their performance. This dance was created after one of the emperors of the Tang Dynasty had a dream. Because of his dream, he was inspired to create this performance along with a piece of special music that was composed by the emperor himself.

The King of Qin dance

The King of Qin dance, the fifth highlight of the show, is a military-inspired dance to display the might of the Emperor named Taizong. It is also known as the Breaking Through the Battle Line Dance.

The sixth part, Spring Outing, is the duplication of the music that was played at the Beginning Of The Spring. Such rituals and ceremonies and music have always had an importance in the Asian and eastern cultures due to the importance of this time of year. Life comes back to nature and prepares the earth for farming and harvest.

The next part is a music played by only one instrument called the “panpipes” which was used in the ancient times of China. It is said that the melody of ‘Oriole Singing in Spring’ is symbolically related to the lively and prosperous times of the Tang Dynasty.

Last but not least is The Ta Ge Dance in unity and harmony, which is another symbolic act that duplicates the unity of the Chines people under the rule of the Tang Dynasty. 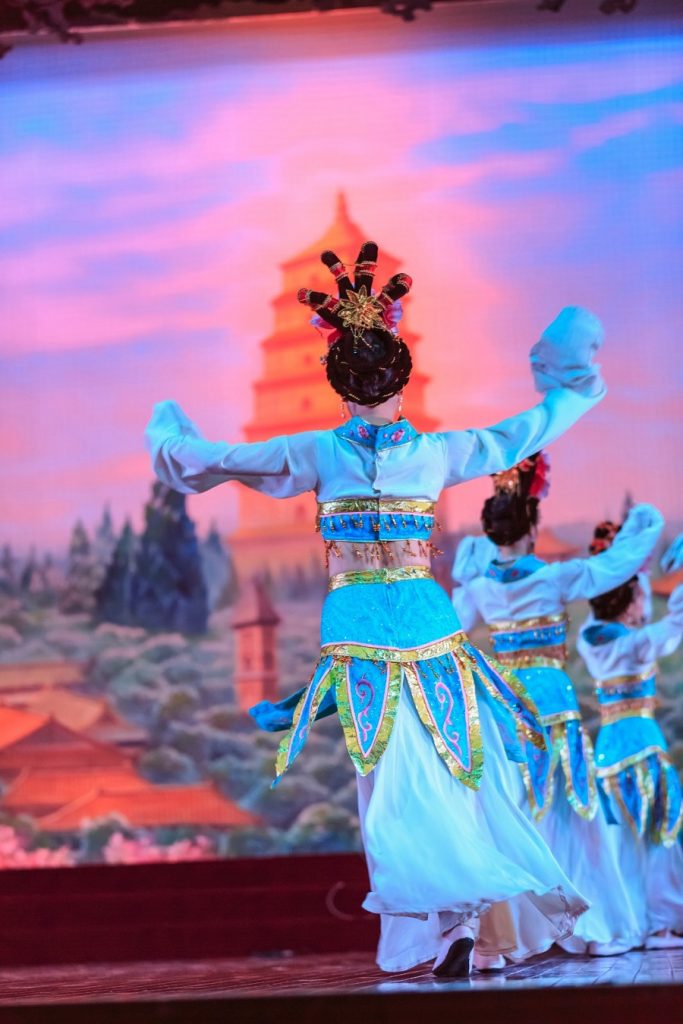 4 Days of a Unique Experience of Buenos Aires