Sun Yat-sen Memorial Hall is an octagon-shaped building in Guangzhou for honoring Sun Yat-sen, Republic of China’s founding father and its first president.

Sun Yat-sen Memorial Hall is situated in Guangzhou at the Yuexiu Mountain’s southern foot. This place is 6.6 hectares (16 acres), which makes it the most significant memorial for Sun Yat-sen who was a revolutionist and China’s first president. This building has charming architecture alongside the magnificent ancient trees. Sun Yat-sen is one of the most known and beloved Chinese democratic revolutionists who is respected by all Chinese.

Who was Dr. Sun Yan-sen?

Sun Yat-sen was born in 1866 and died in 1925. He was a medical practitioner; therefore, he was known as a Doctor. He also was a Chinese revolutionary, China’s first president, and the Republic of China’s founding father. Dr. Sun Yatsen was also the co-founder of Kuomintang, which overthrew the reigning monarch and put an end to the Qing Dynasty. He then picked Guangzhou as his headquarters in the 1920s.

As you enter from the south entrance, you will see a Bronze Statue of Sun Yat-sen. The statue has a height of 5.5 meters (18 feet) and weighs around 3,900 kg (8,600 pounds). The pose used for the figure is an imitation of Sun Yat-sen while giving a speech at Sun Yat-sen University. Beneath the bronze statue, you can see the white granites with one of Sun Yat-sen’s important written works carved on it. 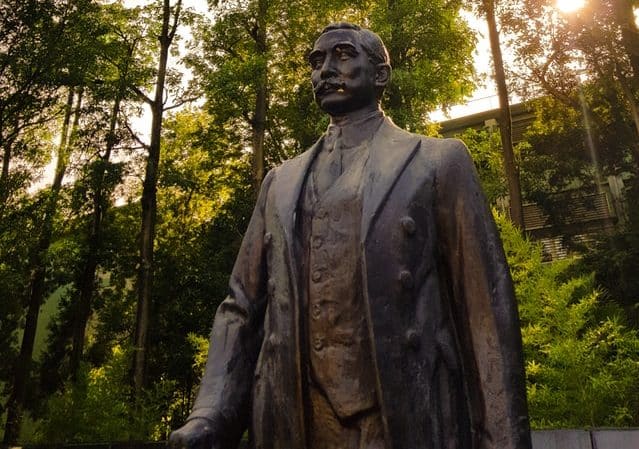 The main building of this place has a beautiful octagonal style and looks like ancient palaces. This is the most notable building here, which is mostly blue and red. Hanging in the middle of the building, there is a quote by Sun Yat-sen, which means “the whole world is one community”. The main building is an old octagon structure decorated with beautiful blue glazed tiles. The foundation and steps of this building are white granite.

The eight enormous pillars in front of the building are made of red terrazzo. In the northwestern part of the main building, you can find the Exhibition Hall for Sun’s Deeds. There are many objects inside the building, such as pictures and written material, which are to demonstrate Dr. Sun Yat-sen’s activities. The most exciting thing in the hall is a small area, paved with bricks of five different periods. There is also a great platform inside, used for holding many performances and important gatherings.

Besides the historical value of the building, you can find amazing collections of banyan trees in the southern and northern sections of the main building called “Tree in Tree” and “Tree Embracing Tree”, respectively. In “Tree in Tree”, there is a giant 100 years old banyan tree, which holds other banyans with its arms. ‘Tree Embracing Tree’ attraction demonstrates another huge banyan, which is embracing a Moringaceae tree. Do you have any more information about Sun Yat-sen to share? Feel Free to Leave your comments and thoughts for us.

8 Hours
Private Tour
NOT included
Added to wishlistRemoved from wishlist 0
Add to compare
From: $155.00