Sukhothai Historical Park – The Ruins of Sukhothai in Thailand

The Sukhothai Historical Park holds an incredible amount of history. This park contains the ruins of 21 historical sites and another 70 locations close to it, making it one of Thailand’s most impressive World Heritage sites. Cycle around this park and catch a glimpse of Sukhothai architecture, including the remains of remarkable temples and lotus-bud stupas. There are more! You can visit other impressive remains outside of the city walls.

During the 13th century, there wasn’t a country named Thailand. The Khmer empire controlled some regions, and other regions were independent kingdoms. Sukhothai was part of the Khmer empire either before separating from it in the 1200s to become an independent nation. Although there were other Thai nations in the area, the rise of Sukhothai was so spectacular that it made it the first capital of Thailand.

The rise of Sukhothai is attributed to King Ramkhamhaeng the Great. At his time, there was considerable growth in arts. After his death, Sukhothai experienced a decline. Then, Ayutthaya, a southern kingdom, rose to fame as the new capital of Thailand.

This historical park has many temples, each used to be a magnificent structure at its time. Wat Mahathat, Wat Sa Si, Wat Si Sawai, Wat Asokaram, Wat Tra Kuan, Wat Chana Songkhram, Wat Pa Mamuang, Wat Chang Lom, Wat Chang Rop, etc., are among the most famous temples. Find out even more about some of these temples below.

The Wat Mahathat (Thai: วัดมหาธาตุ) is placed in the heart of the old walled town. The temple used to be one of the most remarkable and most prominent temples of the empire. In English, The name of the temple is interpreted as “Temple of the great relic.” Mandala, The Hindu symbol representing the universe, inspired the first King of the Sukhothai empire, Sri Indraditya, to construct the temple between 1292 and 1347.

Wat Mahathat wasn’t significant from the first. Later kings expanded and renewed it various times. There are smaller stupas that are surrounding it in 8 directions. At its prime, the temple contained close to two hundred stupas; however, only a few are still standing. The chief stupa symbolizes the Sukhothai architectural arts, with its lotus-bud shape. The temple also includes a vihara (Buddhist monastery), mandapa( a pillared hall), and an ordination hall.

At this temple, the Ramkhamhaeng stele was discovered. It contained a lot of knowledge about the great King Ramkhamhaeng and the history behind the Sukhothai empire and Wat Mahathat. 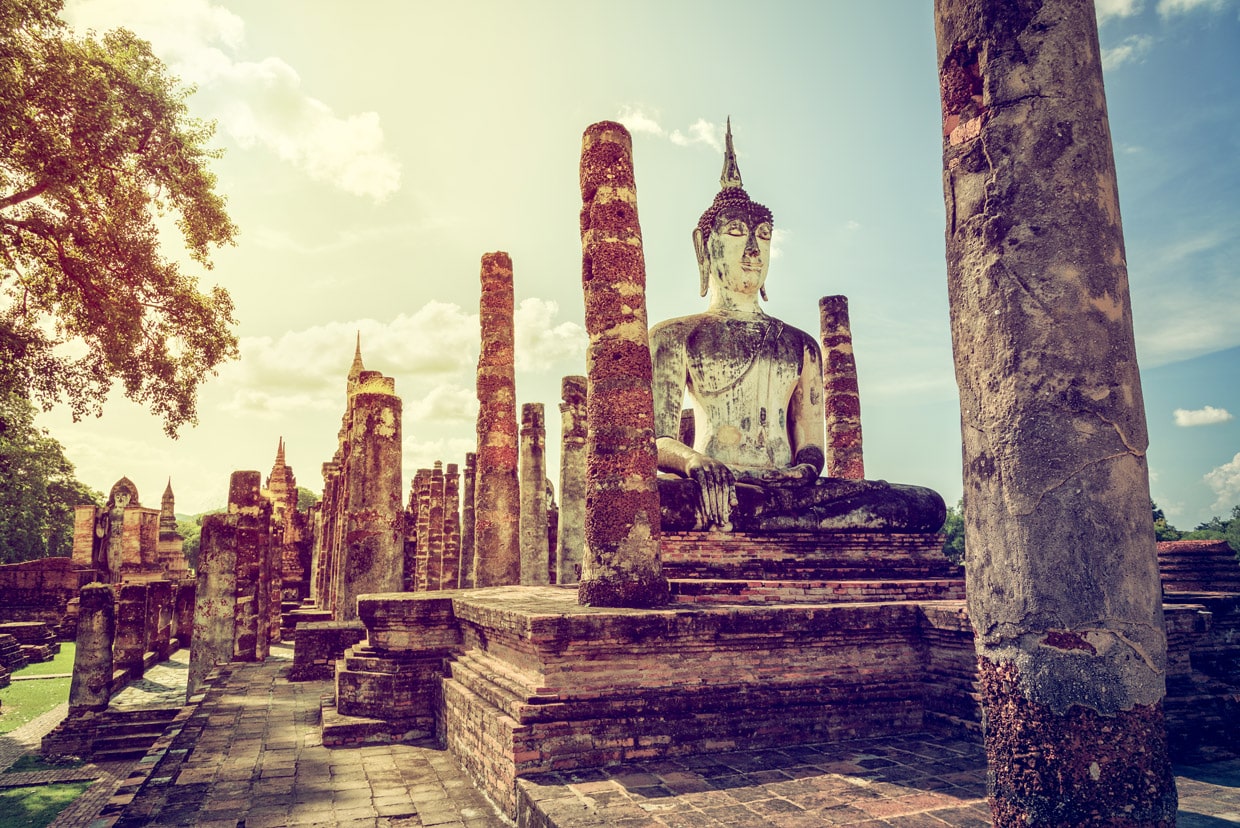 Noen Prasat or Palace Hill (Thai: เนินปราสาท) was once a noble palace of the Sukhothai Kingdom. Mongkut, a monk who was taking a religious journey to the north of Siam, discovered the remains of Noen Prasat in 1833. The palace had a square base with a width of 200 meters. Mongut also discovered the Ramkhamhaeng stele, and the Manangasila Throne. The Manangasila Throne is a large rectangular slab of grey stone covered in lotus petals.

Nearby, researchers discovered the remnants of terracotta pipes that were apparently utilized to provide water from a city lake to the pools. The other thing that was found in the area was the remains of a brick platform. Many believe that it was the royal cremation place since there were remains of bones and ashes.

The monk of Ratchathani Temple donated about 2000 artifacts to this museum. This museum also contains contributions of the locals who donated historical objects. Ramkhamhaeng National Museum mainly houses things that are found in Sukhothai. However, others were found from Si Satchanalai, Kamphaeng Phet, Phetchabun, and Phichit. There are Buddha images and Hindu god sculptures, Sukhothai artifacts, sculptures from the 13th century, porcelain, etc. 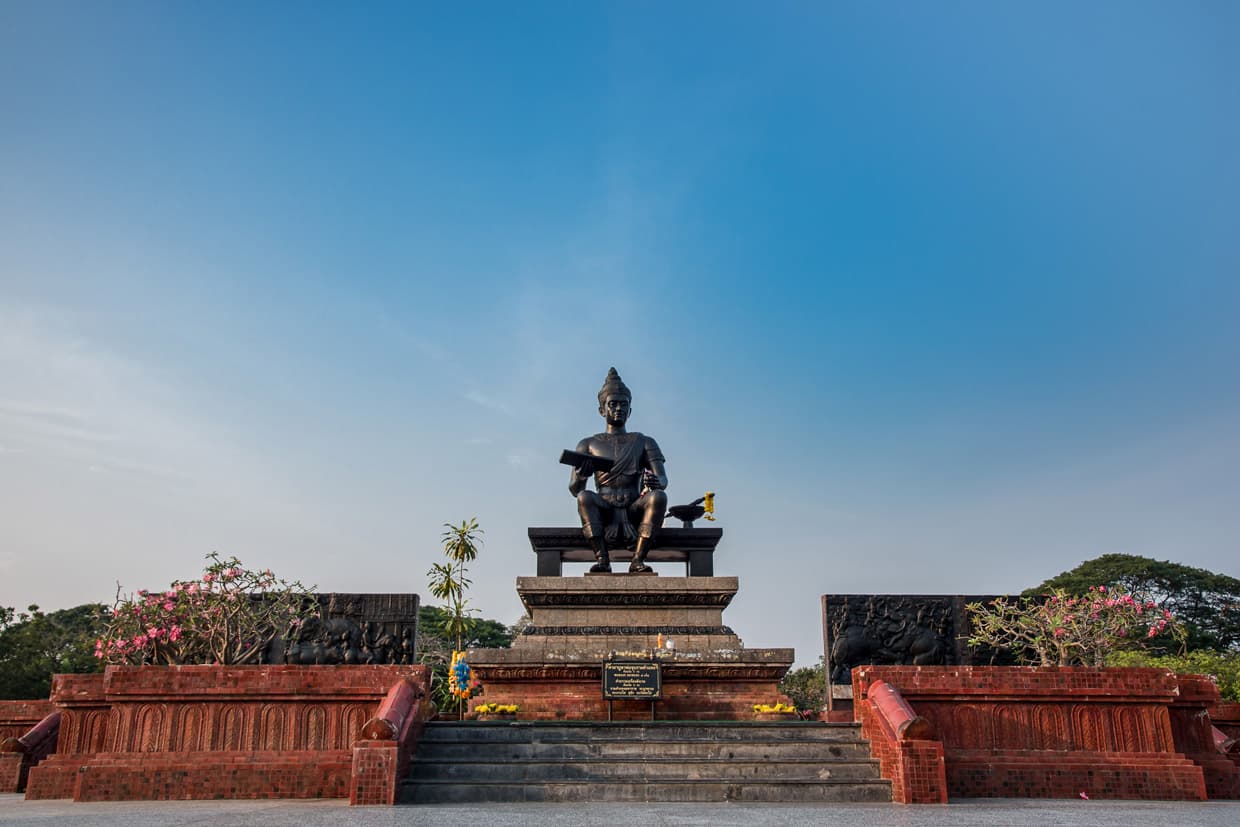 Wat Si Sawai (Thai: วัดศรีสวาย) is one of the earliest temples of Sukhothai, founded in the late 12th or the early 13th century. At first, the Khmer Empire structured it as a Hindu shrine dedicated to an Indian god and a place for the Thiruppavai ceremonies. These were all before the establishment of the Sukhothai Kingdom.

Vajiravudh (Rama VI) discovered the Hindu God’s image on the assembly hall during the early 20th century before becoming a king. During the Sukhothai Kingdom, Wat Si Sawai turned into a Buddhist temple with two new assembly halls.

Many believe that the three Khmer corn cob-shaped prangs are the most eye-catching feature of Wat Si Sawai. Khmer started constructing them during the late 12th century or the beginning of the 13th century; however, the construction never ended. After centuries and during the Ayutthaya era, the building finally finished in the Lopburi style. 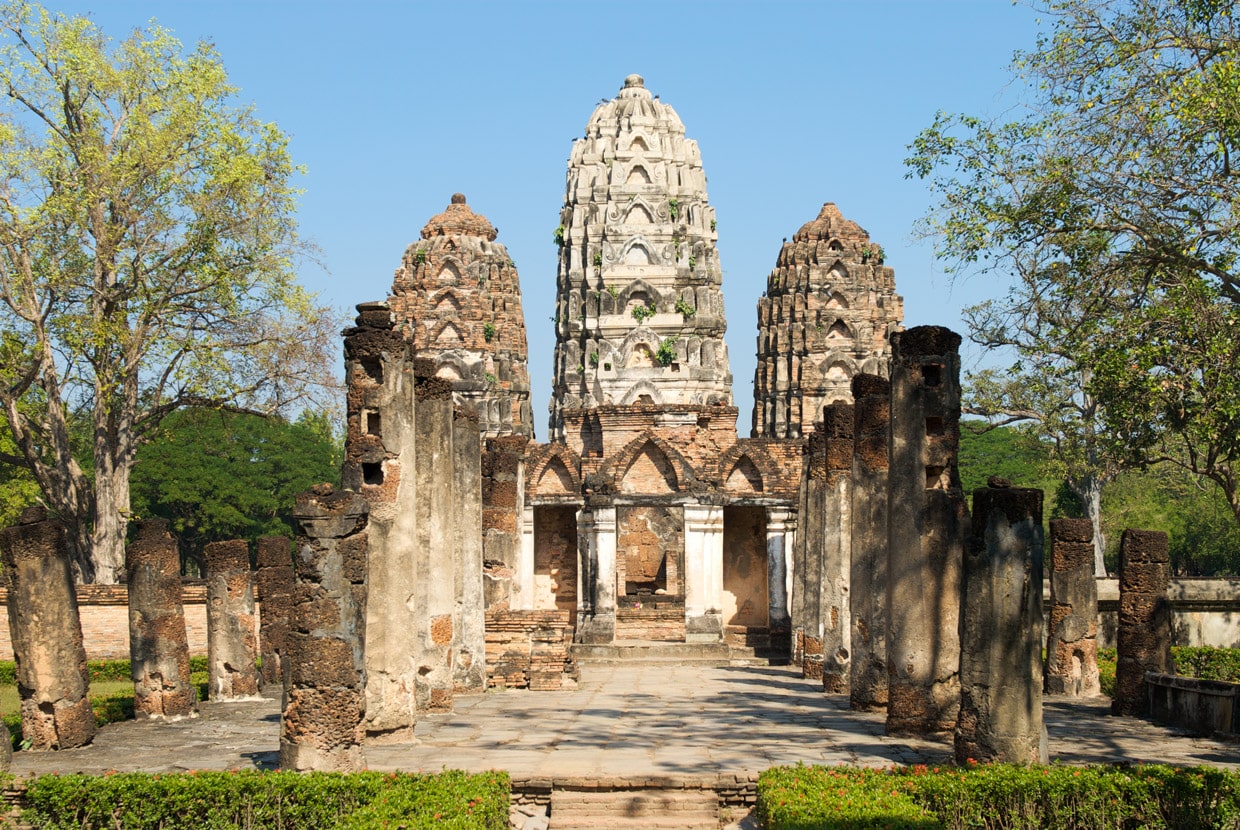 The Wat Phra Phai Luang, or the Temple of the Great Wind, is placed about 500 meters from the central area and just outside the old walled town. Like the previous temple, the Wat Phra Phai Luang is one of the earliest temples of Sukhothai, founded in the late 12th or at the beginning of the 13th century, and before the time of the Sukhothai kingdom. The builders first dedicated it to Vishnu; however, its usage changed during the Sukhothai era. In the Sukhothai era, it was altered into a Theravada Buddhist temple.

The most prominent thing at Wat Phra Phai Luang, and the first structures built were the three springs. Unfortunately, only one of them is left. The remains and pillars of the chief assembly hall are located just in front of these Khmer-style prangs. The assembly hall itself used to be surrounded by smaller stupas. There used to be Some Buddha statues behind the main stupa, but most of them were stolen during the 50s.

The Wat Sa Si temple is not too far from the Wat Mahathat in the central zone. Being located amongst the Tra Phang Tra Kuan pond filled with lotus flowers, Wat Sa Si is one of the most charming Buildings of the Sukhothai Historical Park.

Stone inscriptions that were discovered in Sukhothai show that the Wat Sa Si was constructed at the end of the 14th century. Besides this small temple, there is a principal stupa, a small chedi, an assembly hall, a pedestal, and a Sukhothai-style walking Buddha image. A bridge links the island and the central area. 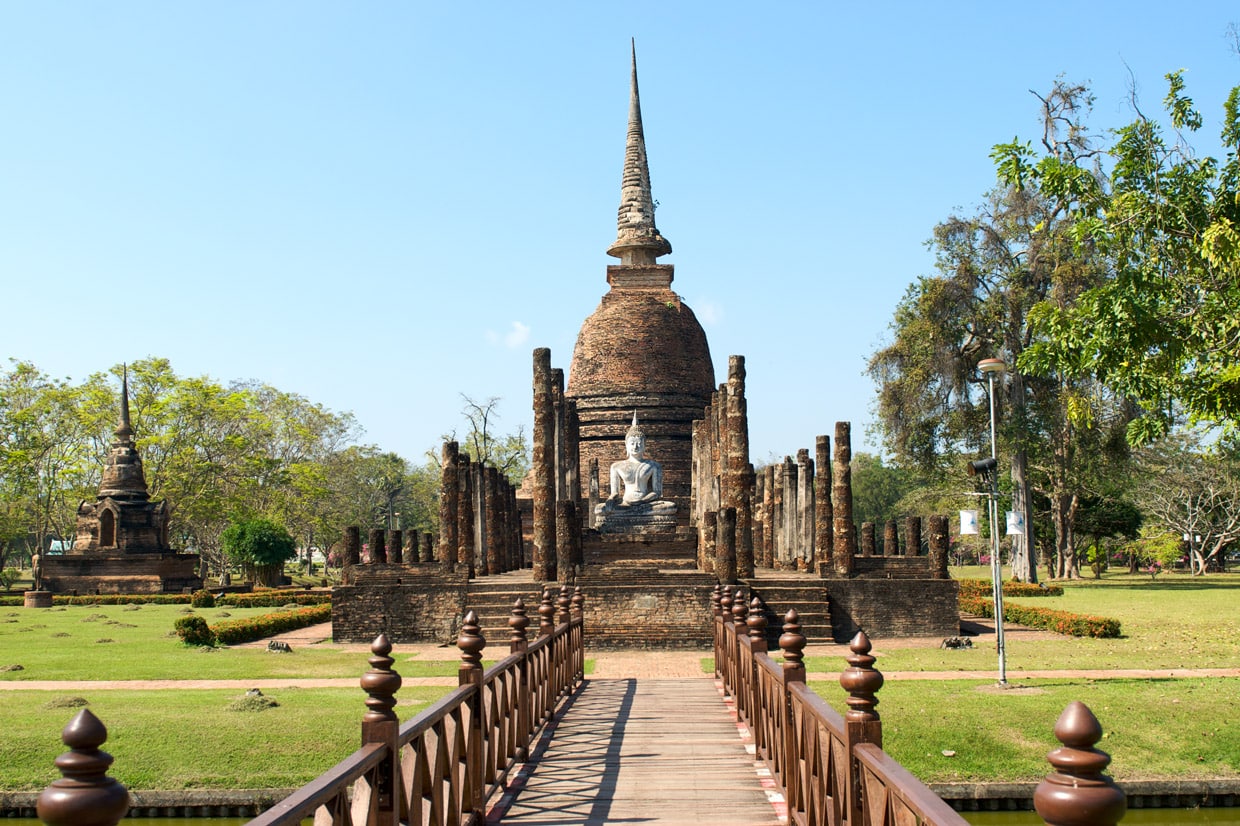 The Wat Si Chum temple, situated outside the walled city’s northern zone, is famous for its mondop, which features a massive portrait of the Buddha that is partially noticeable externally. The temple’s name means “temple of the Bodhi tree.” The Bodhi tree is a meaningful symbol in Thailand, which was under the Bodhi tree that the Buddha achieved wisdom. The roofless mondop structure houses Phra Achana, a massive Sukhothai-style Buddha image. Sukhothai’s Phra Achana stands 15 meters tall and 11 meters wide, making it the largest Buddha image in the country. 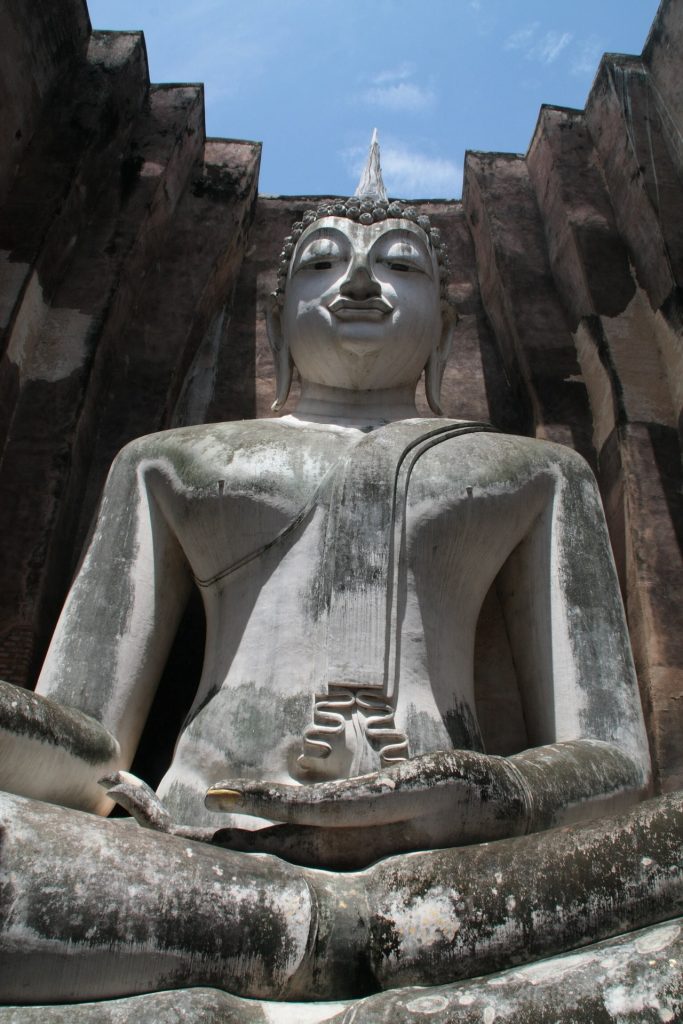 How to Go There?

You have multiple options to go to Sukhothai. However, the easiest way is to fly from Bangkok. The two cities have daily flights. Another possible option is to take a bus or train from Bangkok or other northern areas. Keep in mind that Sukhothai itself doesn’t have a direct train station. Also, many buses drive to the nearby big city, Phitsanulok. Phitsanulok is only 60km away from Sukhothai, so make sure to check the destinations properly.

The new Sukhothai is less than 20km from the Sukhothai Historical Park. From that place, you can take a bus or shared taxi to the historical area. The shared taxi will cost 30 Baht ( less than 1USD). Since it might get a little crowded, try to avoid it when children are heading to school or coming back. Another option to head to the Sukhothai Historical Park is renting a Tuk Tuk or a scooter. It will cost about 175 Baht (about 6USD).

Sukhothai Historical Park does not allow cars, and you may not be able to explore the entire park on foot, so you should consider renting a bicycle. At the entrance, you can rent a bike or scooter for a small fee. You will also get a map, which shows you the best temples of each area. Cycling around the remains of old temples is the best thing that you can do; you will see lots of things in less time, and you exercise a bit! At particular times, there are cycling tours for those who are interested. 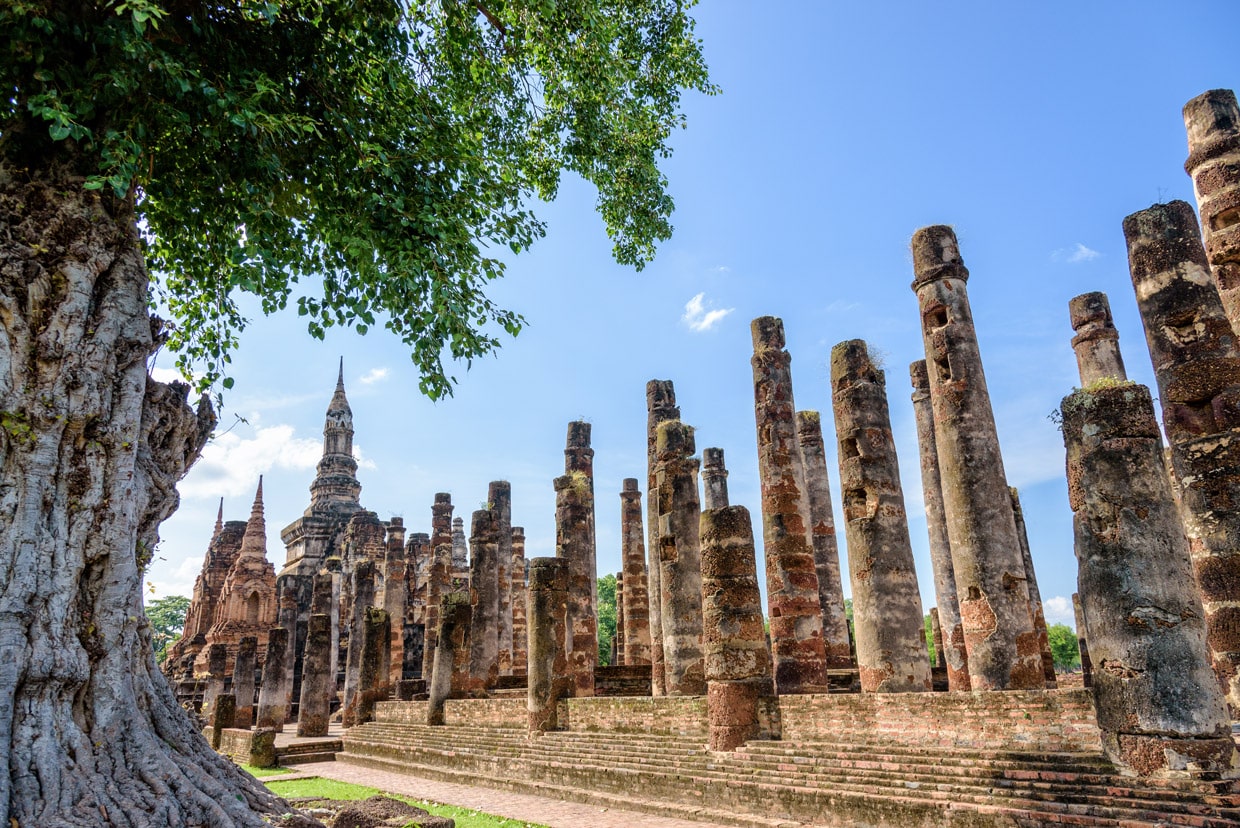 There are five zones within the park. For entering each zone, you will have to pay 100 Baht (USD). If you want to visit all five zones, you can pay 350 Baht (less than 12USD) to pass to all zones. Note that you have to pay 200 Baht ( about 7USD) to enter the central zone. The tickets are valid for the whole day, so remember to keep them with yourself. If you are coming on a bicycle, paying an extra fee of 10 Baht (less than 1USD) is necessary. Sukhothai Historical Park is open daily and from 6:30 AM to 7:30 PM. On Saturdays, the park is open until 9 PM.

From March to June, it gets boiling in Sukhothai, so you might find it unpleasant. Sukhothai gets rainy from July to October, and you can’t walk around the historical park in the rain. Late December to February is the best time to visit the Sukhothai Historical Park. The weather is cool and with no rainfalls. Keep in mind that January, February, and July are the busiest months when most tourists visit Thailand.

With an average annual temperature of 33° degrees and 775 mm of rain (equaling about 137 days of dry weather each year), Sukhothai is warm in both the wet and dry seasons. The annual average humidity is 67%, and the annual average UV-index is 7. 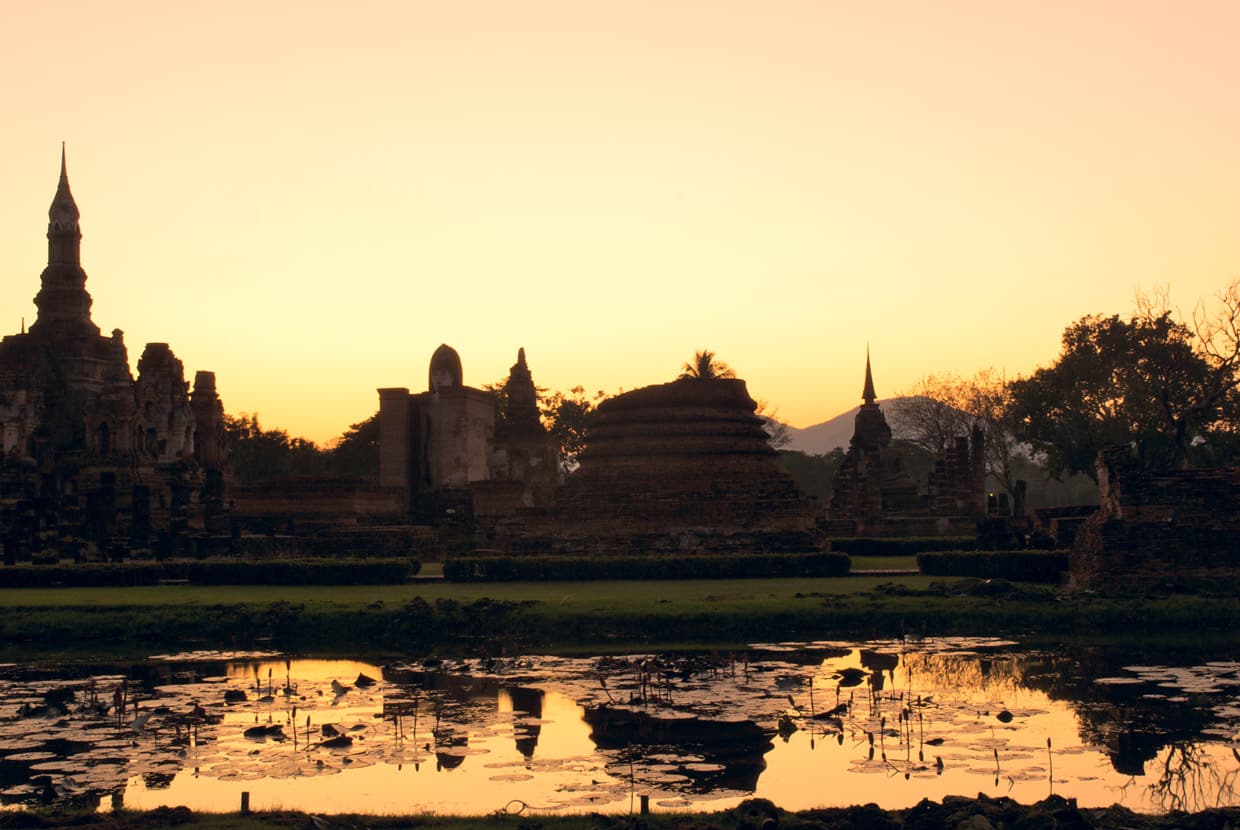 Since the Sukhothai Historical Park is close to the new Sukhothai, you can book a room in numerous city hotels. Besides the hotels, there are B&Bs & Inns, Lodges, Condos, and Hostels, offering excellent facilities.

You may book a room nearby, less than 2km away from the historic area, if you prefer to access it more straightforwardly. There are resorts, villas, hotels, boutique houses, and guest houses. All of them have adequate facilities and fair prices.