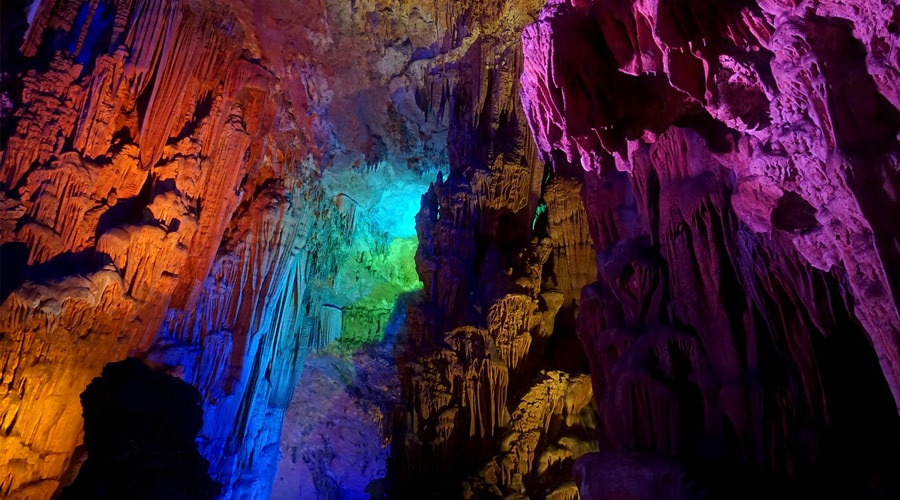 Reed Flute Cave, also known as the Palace of Natural Arts, is a magical landmark containing a variety of stalactites Illuminated by fantastic colored lighting,
December 18, 2022

Guilin with its numerous natural attractions is known as one of the treasures in China and the Reed Flute Cave is one of its gems covering an area of 262.5 yards (240 meters). The Reed Flute Cave also referred to as Lu Di Yan in Chinese features different kinds of rock formations, which should not be missed by any visitors and tourists!

The name of the cave has no relation with its inside and it comes from another origin. Outside of the cave, you can find reed grass used by locals to make pipes and flutes; therefore, the name became Reed Flute Cave.

The History of The Reed Flute Cave

You can see more than 70 ink descriptions in the cave. Based on archeological research, they date back to the Tang Dynasty (618-907) which shows Reed Flute’s popularity since olden times. This discovery also brought much fame to the cave and made it a noticeable destination for tourists.

The cave’s main entrance was heavily covered by reed, making it a perfect hiding place during wartimes in more recent times. Local people used to seek refuge in Reed Flute Cave during World War II (1393-1945) and the Sino-Japanese Wars (1894-1895, 1937-1945, Japan’s invasions of China).

Reed Flute Cave is a solid and natural refuge; therefore, even some newspapers, hospitals, and printing companies settled there for more safety.

Based on some records, the cave had tourists even during the Tang Dynasty but it was officially opened to the public in 1962. Since then, millions of tourists have enjoyed the oddly shaped rocks hidden inside the cave.

Formation of The Reed Flute Cave

Based on some geological research, The Reed Flute Cave is the result of geological occurrences, which happened 600,000 years ago when it was just an underground lake. As a result of the enhancement of mountains and Earth’s decline of water level, the lake over time turned into this cave which led to giving calcium carbonate in the rock for a very long time to dissolute and crystalize.

After a long period of deposit accumulation, finally, the cave was discovered by humans as a secret and magical place. 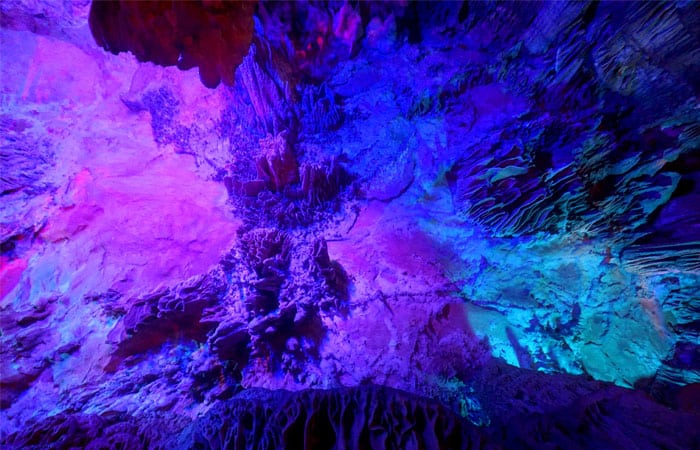 It’s the most famous stalagmite in the cave and as the name suggests, it’s like a tower-shaped pine. Its branches are made of snow and ice

Crystal Palace is a fantastic hall with stalactites hanging up in four directions and illuminated with beautiful lighting effects. In legends, it’s said that Monkey King, who is a crucial character in Journey to the West, fought with Dragon King to get his magnificent weapon to fix the sea.

Inscriptions on the Cave Wall

Besides the natural attraction of the cave, you can find many travelogues and poems related to the Tang Dynasty. 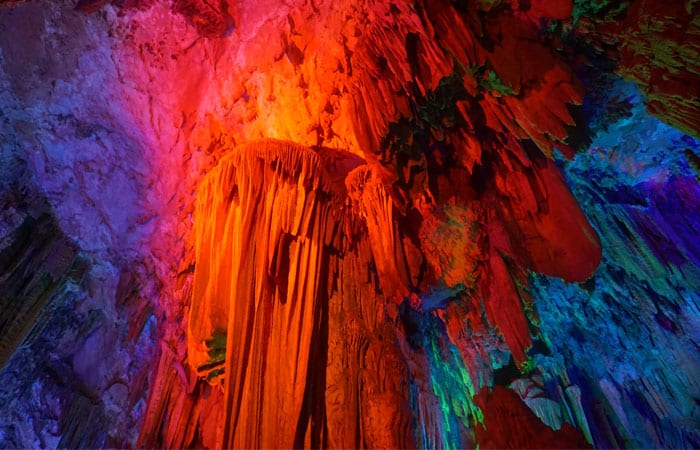 What is waiting for you inside The Reed Flute Cave?

As mentioned, Reed Flute Cave is rated as one of Guilin’s top tourist sites. When you enter the cave, you will encounter a large park with zigzag paths, ponds, bridges, pavilions, plants, and gardens.

Visiting the cave is a unique experience

If you want to visit the cave, you will need to spare at least one hour to feast your eyes with multicolor-lighted speleothems and let your imagination run wild. Viewing the cave with bright colors illuminating each rock formation is a unique experience.

The Reed Flute Cave is known as an astonishing underground palace or “Nature’s Art Palace”. If you even have just a pinch of imagination, you can discover many stalactites, stalagmites, stone pillars, stone flowers, and many more objects.

Chinese have a habit of giving poetic names and you can find these names inside The Reed Flute Cave as well such as The Crystal Palace, Virgin Forest, Dragon Pagoda Flower, Fruit Mountain, etc. Some spots have other names. Their translations could be considered a bit odd based on cultural differences such as, “A Bumper Harvest of Melons”, “Fish Tail Peak”, “Red Silk Mosquito Net” or “Listening to Flute Music from a Secluded Place”. 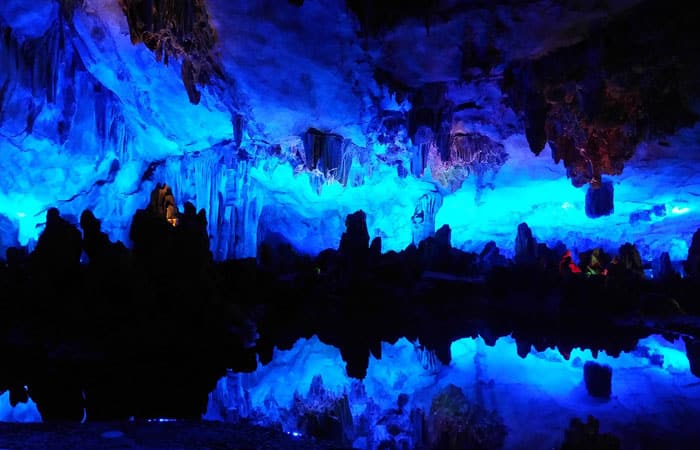 If you go to the Crystal Palace or Flower and Fruit Mountain spots, you can get professional souvenir photos (with special equipment and illumination) for just a few RMB. Some reed flutes and pieces of stone are the typical souvenirs you can obtain to remember your visit to one of the main attractions of Guilin. Have you ever visited such limestone caves? Don’t forget to share your experiences and thoughts with us. Also, leave your questions in the comment section so that our professional guides will reply as soon as possible.