Marvel at the great beauty of Red River and Red River Delta, which is spread long and wide in several of the northern provinces of Vietnam. The river begins in the mountains of Yunnan, in China, and travels a great distance between several provinces: like Hanoi, until it reaches the Gulf of Tonkin.  The area around Red River and the Delta is surrounded by karst mountains and dense green forests.

This Red River, also known as the Hong River, is the second-longest river in Vietnam and among the top five longest rivers on the east coast of Asia. The name “Red” is given to the river due to the large amount of Iron Oxide in the waters, which makes them crimson. Several other rivers are joining the Red River along its path, and the Black River and Lo River are among the largest of these rivers.

The History of Red River Delta

There is not much to tell about the history of this land, other than the French occupation of their use of the river as a way of getting to the north from Ninh Binh. The Red River was first used by steamboats, which traveled in both directions toward north and south. Later on, they constructed the railways instead of the boats.

After many years, during the Vietnam War with the United States, the area was bombarded but, one cannot simply fight the beauty of mother earth. The land has recovered, and later on, in 2004 this region, was designated as Red River Delta Biosphere Reserve. This act was part of UNESCO’s Man and the Biosphere Program under the authority of the People Committees of Districts of Thai Thuy, Tien Hai, Giao Thuy, Nghia Hung, and Kim Son. 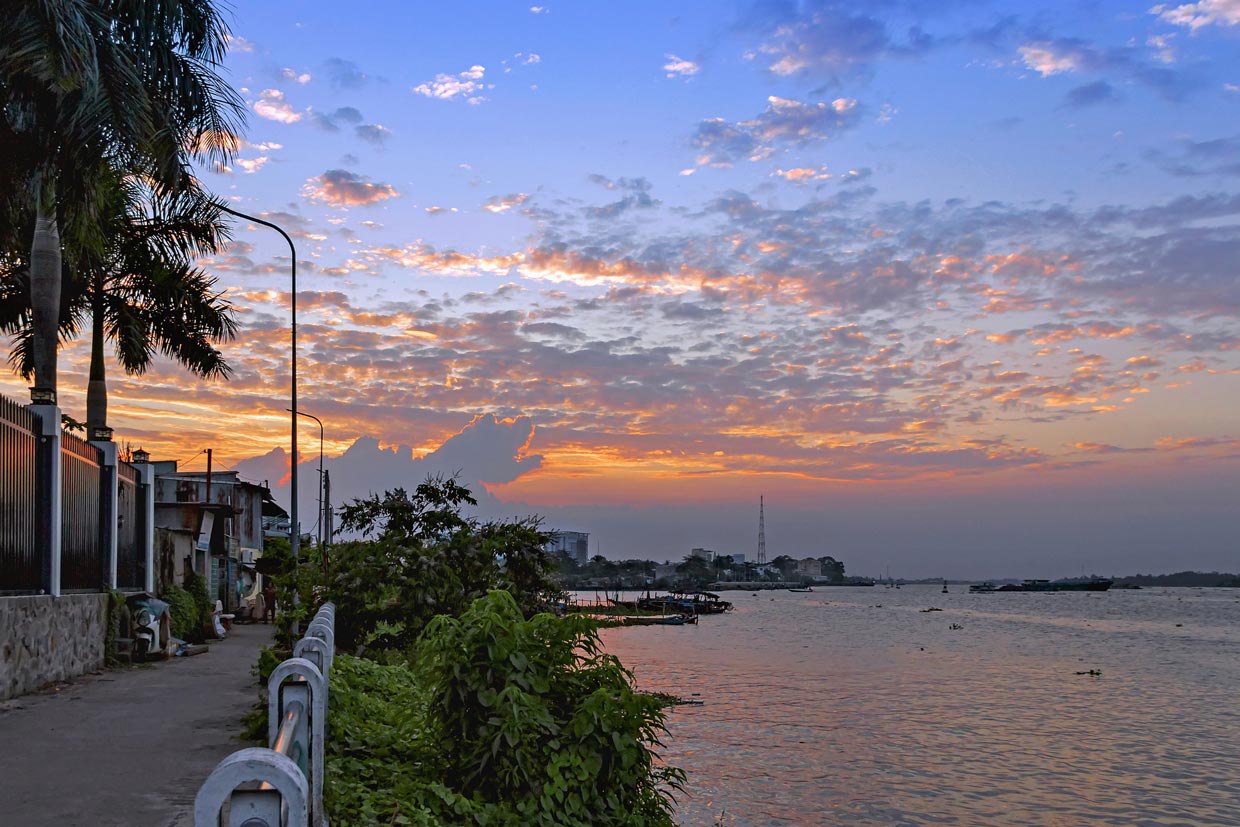 It is about 120 km long, with a width of about 140 km creating a very rich place for farming. The total ground it covers is about 15000 square kilometers.

The most important thing about the river is the economic aspect due to the farming in the very rich lands of the Red River Delta. In a relatively small area, more than 15 million people live and make their living by farming rice. Besides, other crops are planted and harvested, but none of them are as important as rice, which has even become a part of Vietnam’s culture. The green environment added to this economically valuable place gives it an enchanting beauty that is enough to get popularity among tourists.

The production of food is not only limited to farming, and rice paddies spread around the Delta. The marine life in the river and the golf are also of great importance. The fisheries and varieties of fresh ingredients in the area make it an ideal place to try some of the local cuisines of Vietnam with good quality. Red River Delta and many other rich areas of the land in Vietnam make the country a good place for food tourism.

This part of the land is also a scene for tourists and lovers of nature. This magnificent piece of land attracts visitors by boats along the river or trains that pass along the River and Delta. Creative and tasteful adventurers indulge in all kinds of activities such as going around on Vespa bikes, or on foot.

There are numerous villages all around the path that the Red River travels to reach the Delta. Some people get on board the train from Hanoi to this part of Ninh Binh province. Others take on local boat rides that pass the villages or in beautiful natural caves. These row-boats are steered by local women who row with their feet! As soon as the oars become tiresome, they have practiced using their feet, which will only seem odd in your first journey.

Knowledgeable travelers or those coming on tour packages sometimes visit during spring and autumn migrations to see the birds and enjoy the wildlife as well as the vegetations that grow in the Delta. However,  these travelers are also careful not to go into dangerous parts of the wilds as there can be crocodiles in the water; resting, relaxing, and enjoying themselves like the ordinary lovers of nature.

Lovely Craft Villages and Temples in the Nearby Regions

As soon as you plan your visit to the Red River Delta, make sure to indulge yourself in this part of the traveling experience. This journey is a perfect opportunity to go and visit the markets and the cultural crafts to buy souvenirs.

Even if you do not want to spend too much money, you can join in the group activities and the events that locals hold. Some of these fun activities are the singing and dancing of the people or watching a water puppet shows that are popular among the people.

As you head south from Hanoi or go north towards the capital, there are several ancient Temples as well. These places of worship hold the historical value of the land and some of them are still used by the locals for the worship and rituals.

Do not be alarmed by the title as it is just a warning for the possibility of the floods in the Red River Delta. The water volume in this place is too large, but it is completely under control. As you travel, you may come across many dams and dikes that prevent flooding to a great extent.

All the same, you should check the forecast to avoid storms that can cause difficulty. Our advice is to travel with a tour guide or take a tour package. In that case, you can rest assured that you are taken care of and that your transportation is safe for journeying around.

A Wellness Experience in Sri Lanka