Qingyang Palace is an important Taoist temple in the city of Chengdu. Although Qingyang Palace is located in the busy part of town, inside it is unexpectedly peaceful and quiet. This monument is beautiful all around the year, but during February, when Flowery Fair and Temple Fair is held, there will be a much dramatic atmosphere there. Inside the temple, you can see people coming to pray and offer candles and joss sticks.

Qingyang Palace’s history date back to the ancient Zhou Dynasty (1046 BC–256 BC). This temple is considered the most famous Taoist temple in Western Sichuan and Southwest China. Qingyang is also listed as one of the Sichuan Key Cultural Protected Units and National Key Taoist Temples. (Photo by © a participant via Flickr)

Qingyang Palace has a simple layout with six main buildings inside. These structures are on an axis including Front Gate, Hunyuan Hall (including the Eight-Diagram Pavilion), Hall of Three Purities, Hall of Goddess Douma, Hall of Jade Emperor, and Hall of Tang Emperors, respectively.

The Halls have traditional Chinese Taoist characteristics. They are decorated by a glazed dome on the roof, pillars with animal carvings, and many more uses of the eternal duality of Ying-Yang, which is a crucial principle in Taoism.

As you enter this place, you will need to pass through the Front Gate. On this gate, there is a horizontal tablet inscribed with Chinese characters. This lovely calligraphy and the cultural relic is a work of An Hongde who was a county magistrate during the reign of the Qing Dynasty (1644 to 1912).

When you pass through the gate and enter the Qingyang Palace, you need to walk across a stony road with trees lined on both sides. Then you will reach Hunyuan Hall. This hall covers an area of around 600 square meters (6458 square feet) and has 28 pillars supporting it. In front of this hall, there are statues of Daode Tianzun and Cihang Zhenren, two highly respected figures.

Between Hunyuan Hall and Hall of Three Purities, there is the Eight-Diagram Pavilion, which is a three-story octagonal structure. This pavilion is the landmark of Qingyang Palace, featuring a square foundation with a cylindrical body. This structure is a symbolic design based on a Taoist theory, which is “a square earth and spherical heavens.” The pavilion is lovely, and there are many animals and mythical creatures integrated into its design such as lions, elephants, tigers, and dragons.

On the way to the south, you will reach the Hall of Three Purities, also known as Wuji Hall. It was built in the Tang Dynasty and again reconstructed in the Qing Dynasty. It covers an area of 1,600 square meters (17,222 square feet). In this hall, you can closely see the supreme Taoist lords and the Three Purities.

There is a big bell standing in the left diagonal in front of the hall and a drum on the opposite side. On every first and 15th lunar day as well as the time of the Auspicious Festival, the Taoist monks of the temple would beat the drum and the bell.

Two bronze goat statues are sitting in front of the Hall of Three Purities. Locals consider them sacred and believe that touching them would bring them good fortune.

Hall of Goddess Doumu (Doumu is the Big Dipper’s mother), also known as Yuanchen Hall, is the next place you can visit in Qingyang Palace. This hall was built in Ming Dynasty (1368 to 1644) and it’s around 10 meters (33 feet) long and 9 meters (29.5 feet) wide. In this hall, you can see Pure Vital Breath Primordial Sovereign of the Big Dipper statue and the Supreme Goddess of Earth and Queen Mother statutes.

Hall of Jade Emperor was first constructed in the Qing Dynasty, and later in 1995, it was reconstructed. This hall of Qingyang Palace has a statue of the Great Jade Emperor enshrined on its second floor and the Three Emperor-Officials statues on its first floor.

Although the Hall of Tang Emperors is the last building, it is also the highest hall of Qingyang Palace. This is the place where you can see statues of Emperor Gaozu (founder of the Tang Dynasty), Empress Taimu (his wife), Emperor Taizong (his son), and the successor. There are also statues of four imperial officials including Qin Shubao and Yuchi Gong on the right side of the hall and Lijing and Weizheng on the left side.

Qingyang Palace and Legend of Laozi

Laozi is the founder of Taoism, and he was a philosopher living in the Spring and Autumn Period of China. When Laozi stayed in Hangu Pass, he expanded the texts of Tao Te Ching to Guan Yin.  Nonetheless, he had to leave before explaining the whole Tao Te Ching. He then asked Guan Yin to meet him a thousand days later in Qingyang Palace. In the end, they both arrived on time and continued their unfinished work. Since then, Qingyang Palace is considered a gathering place for immortals. 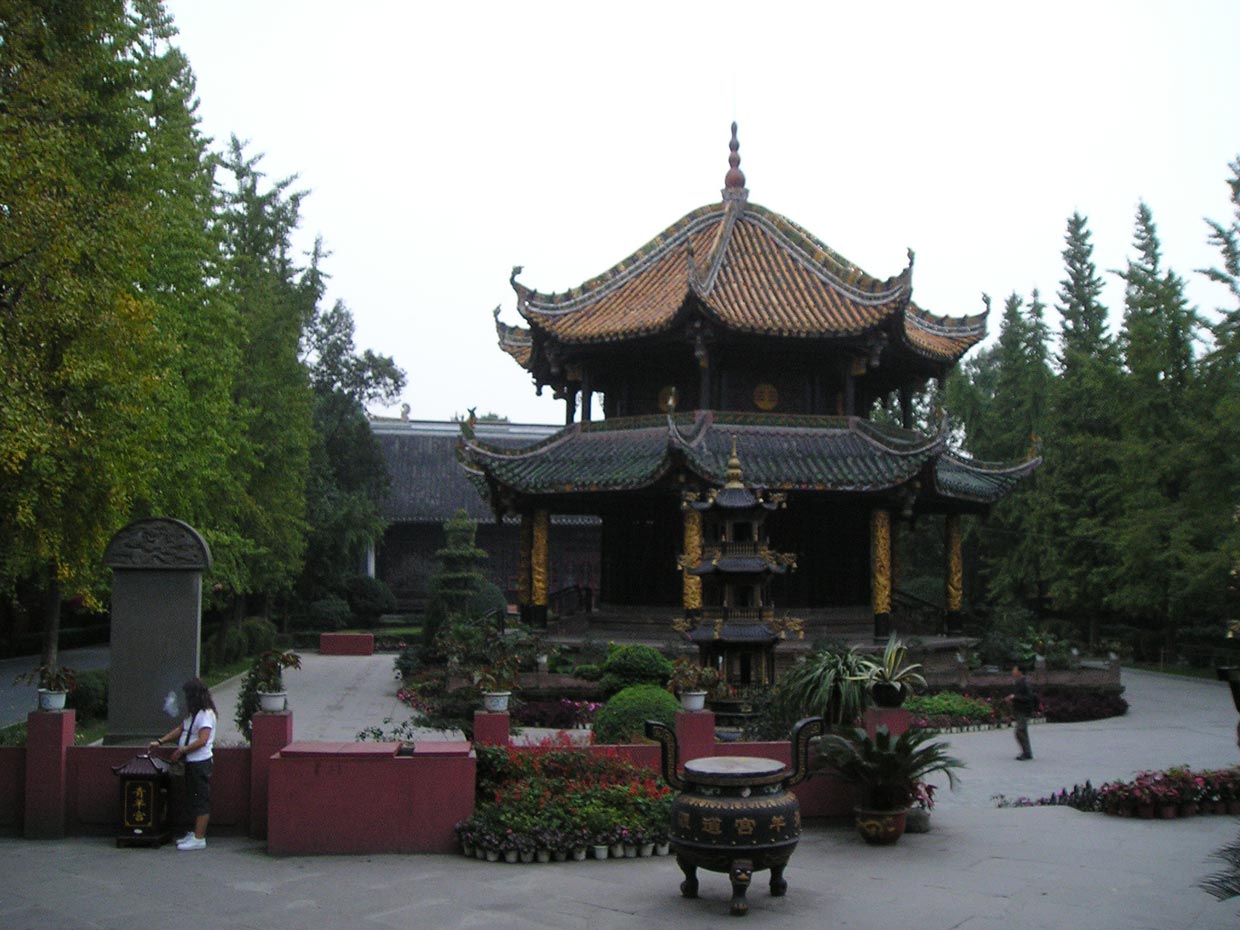 How to get to Qingyang Palace?

This temple is located in Chengdu’s First Ring Road in West Section 2 and has a convenient traffic condition.

The visit to this Taoist temple would take between one to two hours, and you can reach there by bus.

You will need a 10 Yuan ticket as an entrance fee.