The architecture of Phanom Rung Park displays a Hindu Khmer style. Historically, this temple was built between the 10th and 13th centuries; the most captivating elements of a Khmer temple can be seen in this ruin. Phanom Rung was devoted to divine Shiva, the god of creation and destruction in Hinduism. It is worthwhile mentioning that the 402 meters mountain (an extinct volcano) upon which it was constructed corresponds to the sacred mountain where Shiva resided.

Another Khmer temple which is famous as Phanom Rung Stone Castle, made out of pink sandstone, stands at the bottom of this temple. These two temples are probably the best preserved and most well-known Khmer historical parks in Thailand.

The Khmer Empire constructed Prasat Phanom Rung in the early days of this era when the Khmer Empire was a Hindu society that later came to believe in Buddhism. The Khmer architecture in this temple is characterized by a foundation made of laterite and sandstone for the upper portion and carvings of the buildings.

In Thai, the name “Prasat Hin” means stone castle, and this name is given to the temple due to its stone construction. This temple has been restored from a nearly ruined state, similar to many other Khmer buildings. There were numerous sculptures that had broken or were stolen, and many of the structures had been destroyed or were in danger of so.

Thai Department of Fine Arts rebuilt and restored the site over a period of 17 years, since the 1970s. UNESCO has submitted the site as a potential candidate to become a World Heritage Site. Signs in both Thai and English can be seen throughout the site, explaining the functions of the different parts of the buildings, as well as the ideas and norms of Khmer civilization. You can also find car parks, food and drink stalls, and a number of souvenir shops there.

What Will You Find Inside the Side?

Visitors enter the site, passing a 160-meter walk path covered with laterite rocks and outlined with 70 decorative sandstone posts; on top of each stands a lotus flower sprout. This route goes into a number of bridges. At the edge of each is a low wall resembling a Naga, the mythological snake with five heads.

The largest bridge is the first one, with carved snake pictures facing each cardinal direction. The carvings date back to the 12th century. This bridge features the separation between the two worlds. After passing over the Naga Bridge, a set of steps goes up into a set of terraces, pools with the reflections of lotus flowers, and smaller Naga Bridges. In the end, visitors enter the original temple complex.

As you pass through the lounge, you’ll see the main sanctuary. This enclosed area has a few buildings that used to function as bimah or libraries for holy texts. A stunning contrast of colors can be seen in the grassy environment between the walls and structures. The tower in the center is really captivating.

At the center of the temple is a cruciform-shaped sanctuary and tower. In addition to carvings of the Hindu Gods Vishnu and Shiva, the lintels and pediments of the entrance gates to the shrine also depict scenes from the epic Ramayana.

Within the inner sanctuary is the main tower with a height of 23 meters and a width of 9 meters. This tower shows Mount Meru, which is believed to be the center of the world in Hindu thoughts. A linga that symbolizes Shiva’s strength is placed there.

In addition to two brick towers surrounding the main tower, there is also a smaller tower. It is the oldest structure of Phanom Rung and dates from around the 10th and 11th centuries. There are also two libraries within the inner sanctuary, where the holy Hindu scriptures used to be kept. The Phanom Rung temple complex houses a number of ponds that represent the oceans surrounding Mount Meru.

Phanom Rung’s eastern entrance is undoubtedly its most famous part. These carved depictions of divine Brahma’s birth, and an illustration of Vishnu reclining, were taken away from the temple in the 1960s and showed up at the Art Institute of Chicago years after.

Many nationalistic and anti-American voices arose at the time of the restoration work of Phanom Rung, making the returning of the lintel a hot button issue. A famous song by Carabao, one of Thailand’s most legendary rock bands, demands the piece be returned.

Solar Phenomenon and the Local Festival

On two distinct days in a year, the radiation of the sunrise aligns so it shines through 15 different doorways simultaneously. As a result, a pinpoint of light appears in the center of the main sanctuary of Phanom Rung when viewed near the Naga Bridge.

This event occurs every year from April 3 to 5 and from September 7 to 9. The same thing can be seen from the opposite side in the form of sunsets from March 5-7 and from October 5-7. During some years, these dates can move one day earlier.

Phanom Rung Festival is a Buddhist festival that occurs in April at the time of sunrise alignment. These ancient rites of the festival are mixed with modern practices. Lots of good food, good music, dancing, and fun are also a part of the event. The festival occurs on the first weekend of April. 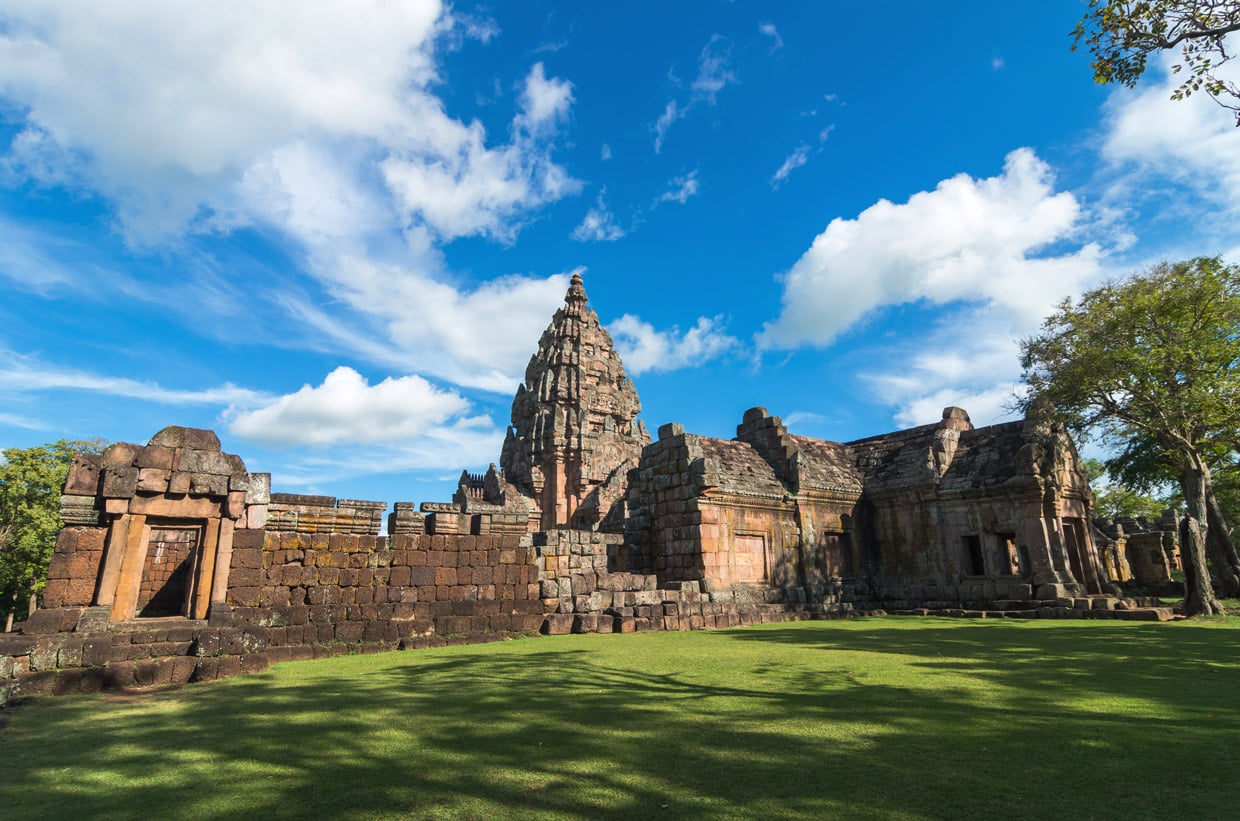 Opening hours for the historical park are from 6 am to 6 pm, and it takes 100Baht for both adults and children to enter the site. Phanom Rung Park’s climate is affected by a tropical Savanna setting. A visit to Phanom Rung is most enjoyable between November and May, during the dry season. But if you are planning to visit in the rainy season, don’t worry! Since Buriram province has relatively few monsoon rainstorms, so even if it rains, you will not see a lot of water.

If you drive almost one hour from Buriram City, you will reach Phanom Rung historical park. Also, Phanom Rung is reachable from Surin province, and it takes you nearly one hour and twenty minutes to get there. If you’re visiting Korat (Nakhon Ratchasima), we recommend you take a leisurely tour around Phimai Historical Park, which is closer, instead of Phanom Rung.

Both Nang Rong and Buriram have west-bound buses that go in the direction of Phanom Rung Historical Park. You can ask the driver to drop you just a few kilometers away at Baan Ta Pek village. From there on, you can get a motorbike taxi. But we do not recommend this way of transportation if you can not speak the local language. Since there is a high chance of not finding anyone in the bus or village speaking English and things will get complicated for you.

It is more reasonable to drive there by yourself or hire a car or taxi. It is possible for you to hire a car at Buriram Airport from either Avis or Thai-Rent-a-Car (which is a well-known company in the area).  Both Phanom Rung and Muang Tam are accessible by road, and with the help of Google Maps, you can get there easily. Don’t worry! The roads are totally in good condition. Renting a motorbike in Buriram or Surin is also very simple. Nevertheless, if you could not find any, it is likely that your Hotel offers you one or directs you to one. 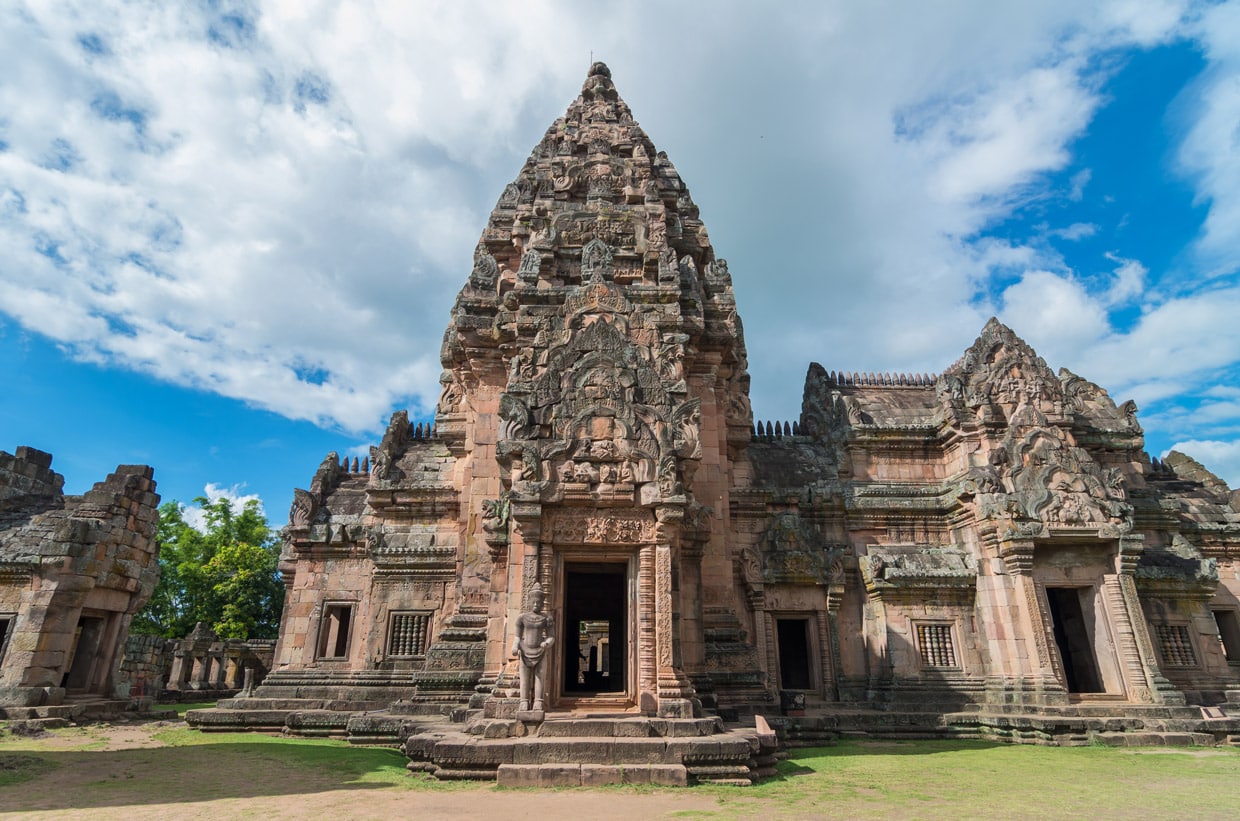 Nang Rong village is the nearest place worth staying in if you want to stay close to Phanom Rung. It’s just 27 km away. Visitors there will be provided with enough budget-friendly guesthouses and a few more luxurious hotels. For only THB350 (THB250 with fan), Honey Inn offers a simple but clean double bedroom, complete with its own bathroom and air conditioning.

It is located in a good location close to several ruin sites and offers you a comfortable place to stay. The owner speaks good English, and you can hire a motorbike for THB250 per day. They will take you from the bus station as well if you want to.

An alternative choice would be California Hostel, which offers private rooms with air conditioning. The owners speak English fluently. The Hotel de l’amour is another worthwhile residence located approximately 50 km south of Buriram City. You can also spend the night in Buriram City.

Although the hotels in Buriram City are mostly quite modern, they are all quite affordable. Buriram has several of the best value hotels in Thailand, but they may be more expensive during big football matches and when major car races or motorcycle races take place at Chang International Circuit. 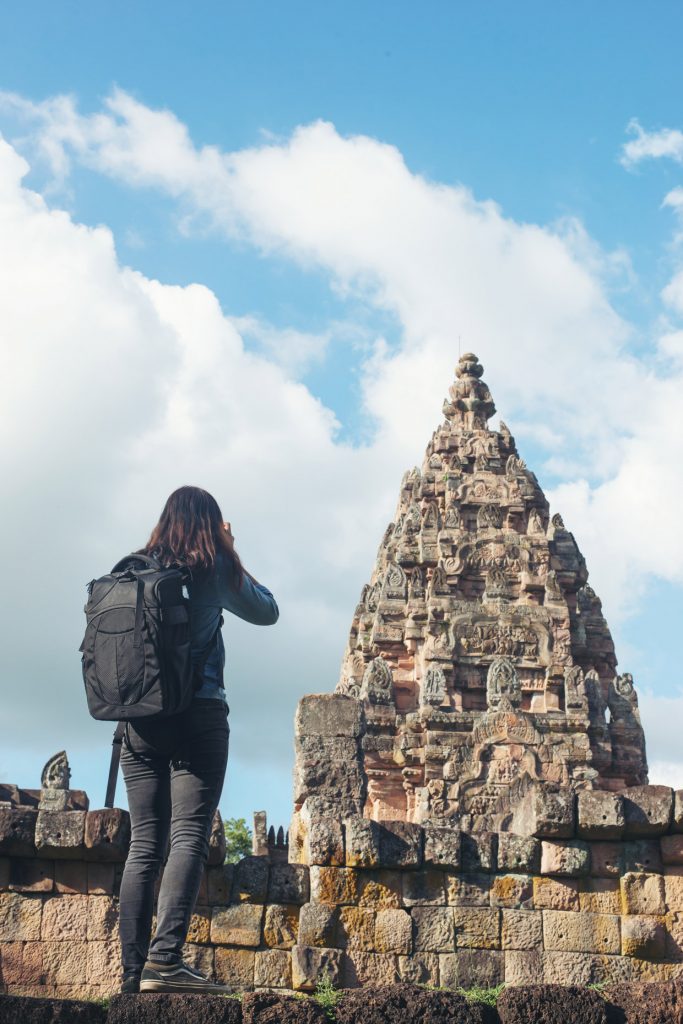 Regional Isaan food is one of the most popular options in Buriram province. If you stay in Nang Rong, you can buy food from street vendors every evening. Please keep in mind that everything can be too spicy. For a milder taste, one can request Phet Nit Noi.

Do not forget that aside from a couple of simple restaurants, Nang Rong does not have a great variety of restaurants. The larger hotel restaurants might provide their customers with Western food; don’t expect anything special; they might only have a few choices on their menu.  There are several simple restaurants in the parking lot close to the ruins where you can purchase fast and simple food or drink.

In This Article
Phanom Rung Facts and Style
What Will You Find Inside the Side?
Naga Bridges and Naga Walkway
The Temple Complex
The Inner Sanctuary
Phra Narai Lintel
Solar Phenomenon and the Local Festival
Opening Hours and Entry Fee
How to Get There?
Where to Stay
Where to Eat

12 Days Highlights of Morocco from Casablanca