In Jordan’s desolate desert canyons, an ancient gem is located, the Ancient City of Petra. Petra is a UNESCO World Heritage Site and one of the New Seven Wonders of the World. The city flourished over 2,000 years ago when it used to trade with Rome as an equal before earthquakes in the 4th and 6th centuries C.E., which ruined the city. This archeological city is an enormous combination of tombs, monuments, and other religious structures carved into sandstone cliffs. Petra also used to be the capital of the Nabataean kingdom, but in the first century A.D., it yielded to the rising power of Rome.

Visit one of the New Seven Wonders of the World, dating back to Before Common Era at Petra, Jordan. This ancient city of the Nabataeans flourished and then became a part of the Roman Empire, which turned it into a trade center. What remains of this magnificent place are the buildings lost to history for several centuries after the Crusades and Saladin’s Conquests.

But as all the wars were over and time had passed, a lost ancient city was again recovered in the 19th century. Petra is now one of the top highlights of Jordan and a unique archeological park. If you want to visit this marvelous site from ages gone, read below and plan your journey into the past by visiting Petra.

A Small History About Petra

Being centuries old, the whole complex and the buildings inside the area have a lot to tell. But being lost in history reduces what can be said about a historic site. But in short, Petra was once a critical city of the Nabataean Kingdom of Arabs in the 6th century BCE. The area itself is said to have been inhabited for more than a few thousand years, but the kingdom and the capital of the Nabataeans were built much later.

The area and the unique way of life in the desert’s hot sands allowed this kingdom’s citizens to live and prosper with ease. But as they flourished, they became a target for rivals. Their environment gave them an advantage despite being harsh, but they became a client state of the Roman Empire in the first century BCE.

For about 200 years, the locals lived independently and under the protection of the Romans. But their luck ended, and the Romans took over and annexed the kingdom and then renamed it. The Petra of the 1st century CE became a central hub of trade for the Arabs of the area but less independence. After nearly 2 centuries under Roman rule, Petra lost its importance with the emergence of new trade routes.

Petra After the Earthquake

In 363, an earthquake brought much destruction to Petra. After this devastating disaster came the Byzantines, who did not make things better for the locals. They did leave some of their buildings in Petra but nothing that would ensure the city’s survival. This city remained in decline until the early Islamic period when it was abandoned and soon became lost and forgotten in history.

Petra, Forgotten But not Lost

The once glorious city, surrounded by mountains and carved into stone, was again rediscovered in 1812. The city’s rediscovered remains were soon famous again and with a new name, called the “Rose City,” which was later on listed as a UNESCO World Heritage site in 1985.

Best of Jordan Tour from Amman

Day Tour to Petra from Arava

Added to wishlistRemoved from wishlist 0
Add to compare
From: $757.00

What to See When You Get to Petra

As you enter the Petra archeological park complex, you will have to pass from a passage known as Siq. The Siq is a nearly 2 km canyon passage with some carvings and rock walls worth watching as you walk.

As soon as the Siq ends, you will reach the treasury. Beyond the treasury, there is the street, and as you walk on, you will see a Theater left from the Roman era. On the opposite side of the 7000-seat Theater are the Royal Tombs on a hill.

The largest and perhaps oldest of the buildings in Petra is perhaps the Monastery. The Monastery is carved into the stone and has some climbing to reach. But you can get there with a ride which can be rented at the entrance.

How Much Time to Explore Petra

You can explore the area and see the important highlights in one day and return. The ideal amount of time to see all the areas and enjoy your visit is to spend two days at Petra. If you want to spend two days at the complex, be sure to catch the night and the candle lights, which is one of the most memorable things to do at Petra.

The area is full of buildings and monuments to see, making it possible for you to make another visit. During your third day at the park, you can do even more exploring and even go beyond what the ordinary visitors see.

Should you require to make several visits, you do not need to go all the way back to the city. You can simply head to the nearby Wadi Musa, which is very close to the entrance. There are all kinds of budget to top hotels and places to stay nearby.

When to Visit Petra

The perfect time to visit the place and explore is during spring and autumn. The summer gets too hot, and the winter may get cold and difficult. The hours will be different during each season and according to the daylight. It is safe to say that the site will open as soon as sunrise and close at sunset. As for the night visit, you can reenter Petra from 20:00 until 22:00 but not every day.

While planning the most suitable time and temperature, you should also check the forecast and wear appropriate clothing. Other than that, it is better to make your visit during the early opening hours to avoid crowds. If you do so, you will get a much better chance of visiting the monuments all for yourself and take the best pictures possible. 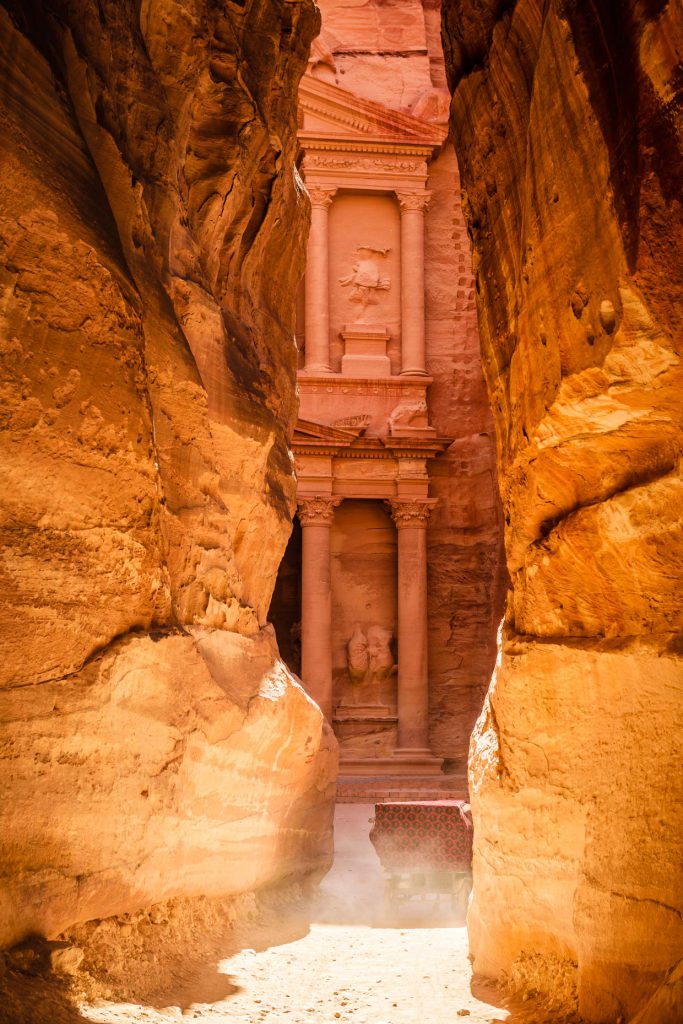 What to Wear At Petra

Although there are no restrictions on what to wear, it is best to wear something to protect you from the sun. Wear something with sleeves that is not warm and gives you the freedom to move. You better have appropriate shoes for walking long distances. Other than these you should probably wear a scarf and bring some sunblock.

Getting Around at Petra

If you are up to it, you can walk around all of the buildings in the complex, which is quite massive. The entire area is nearly 60 square kilometers, which means other than having good walking shoes, you will need to bring a lot of water to go on foot. If the idea of walking around with only a map and water, you can rent a horse, carriage, or a donkey at the entrance.

The most pleasant and fastest of these three rides in the carriage. This convenience is because if you take any of the other rides, you will not be riding; there will be a guide to lead the animal. 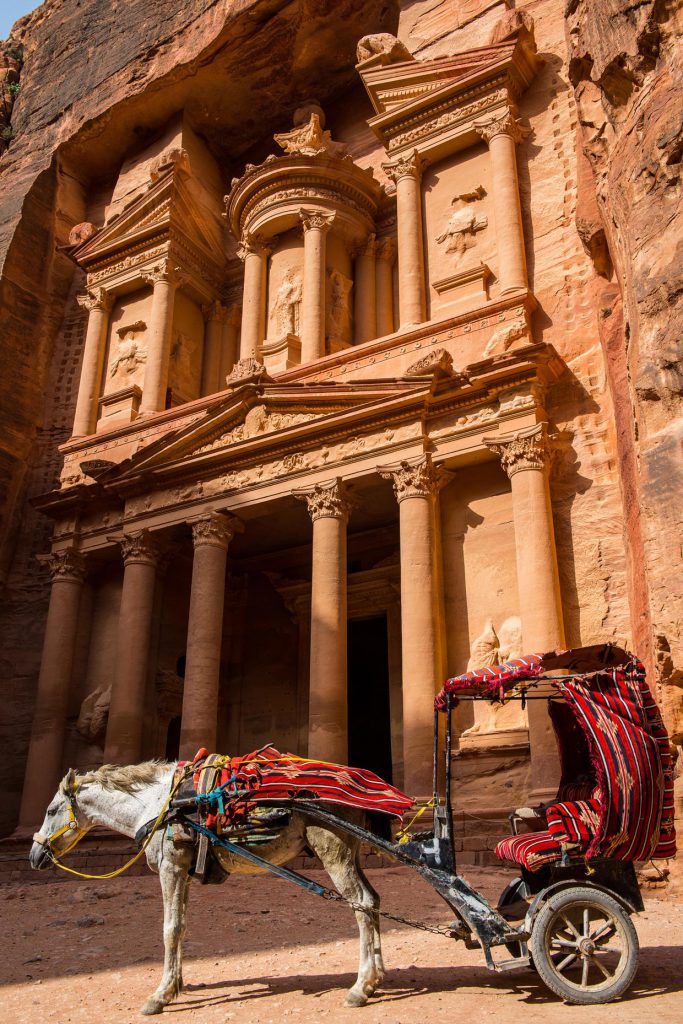 Shopping and Eating at Petra

There are several vendors for water and snacks as well as some souvenir shops. The prices for water and snacks are reasonable, but you might want to negotiate. This variation in prices is because some of the vendors may want to overcharge the tourists. If you can carry some water bottles with you, you may need less shopping at the site. Expect to need about 3 or 4 liters of water. 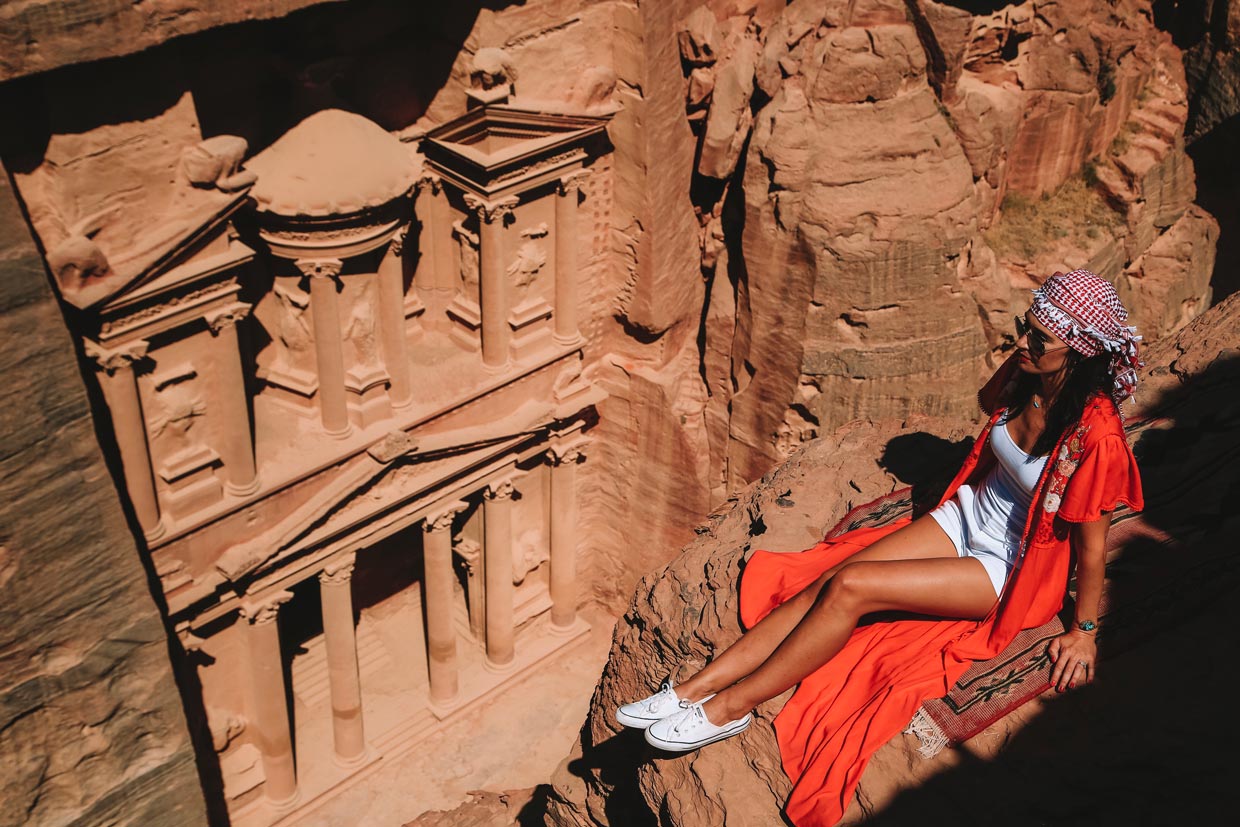 How to Get to Petra

First, you should decide which one of the cities you want to visit before Petra. You might want to head to Amman via airplane and then drive to Petra, or head to Aqaba first. Be ready to spend a few days in these cities and rest, and then head out. For your trip to Petra, you have several options, Car (rental or your own) bus, a minibus, and a taxi. It is also possible to go there on foot, but you will have to be in the town of Petra to do that.

If you plan your trip with your own car or a rental, you have to drive from 2 to 5 hours to get to your destination. If you are going from Aqaba, you will have about 130 km of the ride in about 2 hours. From Amman, however, you will have a little longer way to go. The main road is about 236 km but gets to Petra much faster (about 3 hours considering traffic). Other than the Desert highway, you can also go from the King’s Highway, which is about 250 km. It is a more scenic route and takes longer, but the journey is more pleasant.
Once you reach Petra, you can park your car in free parking near the site.

If you want to travel by public transports, you will have a cheaper ride with limitations. The limitation is that if you miss the bus, you will not go to Petra until tomorrow! What you need to do is to find the JETT Bus in either Amman or Aqaba. The bus will depart at 06:00 in the morning and move from the desert highway from the city.
The bus will cost about 22 JD, but you will have to ask about departure times.

To take a minibus, there is not a fixed price or location or departure time. You will either head to the Wihdat Bus Station in Amman or from Aqaba Bus Station. They will probably take you as far as Wadi Musa, and then you will have to take a taxi for the rest of your way. As for the price, you will have to negotiate as they may want to charge the tourists extra.

The price for a Taxi from Aqaba to Petra is around 30 JD, and from Amman to Petra, it will be around 70 JD. You can pay a little extra and ask the taxi to wait for your outside and bring you back. The same rule of negotiating the price applies to taxis as well as minibusses. The best way to take a taxi is to ask your hotel to call you one.

Keep in mind that as safe as it is to travel to Petra, you might want to keep an eye out for scammers and people who will charge you extra. It is recommended to travel with your own guide to avoid such scams and touts and bring all the necessary gear for the trip to reduce the need for shopping. Always double-check the prices online and on our table below to be sure how much money you will be spending. 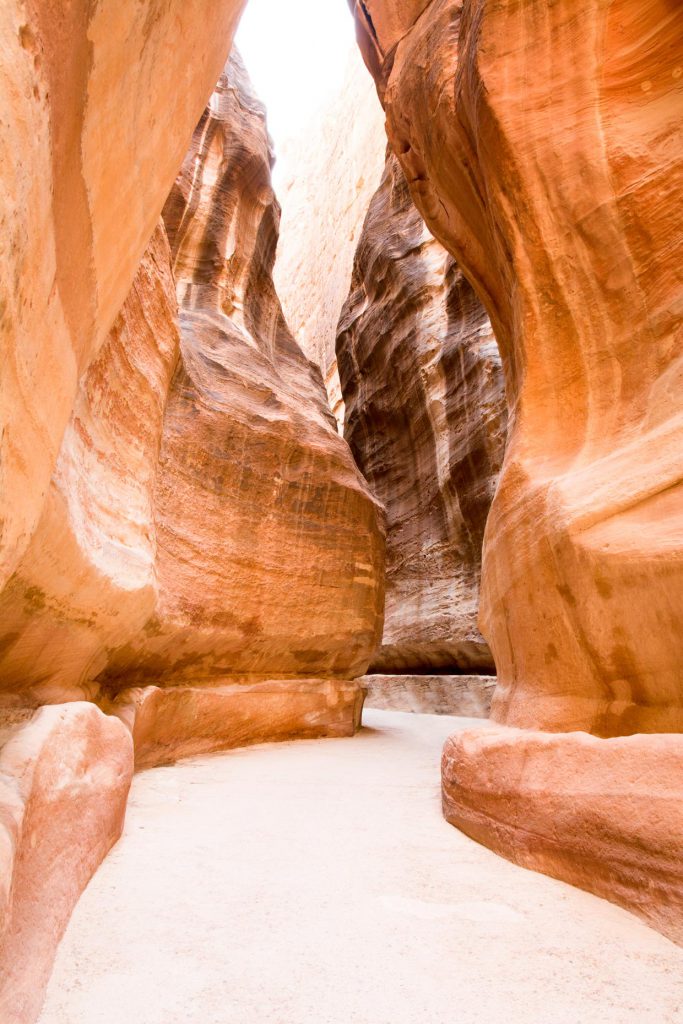 In This Article
A Small History About Petra
Roman Takeover of Petra
Petra After the Earthquake
Petra, Forgotten But not Lost
3 Days Dead Sea, Petra, Wadi Rum Tours
Jordan Tours on a Budget
Best of Jordan Tour from Amman
In Depth Jordan Tour
Day Tour to Petra from Arava
Full Day Petra Tour
Jordan Discovery from Amman
Wonders of Jordan From Aqaba
What to See When You Get to Petra
How Much Time to Explore Petra
When to Visit Petra
What to Wear At Petra
Getting Around at Petra
Shopping and Eating at Petra
Petra Traveler Information
How to Get to Petra
Notes

Angkor to Phnom Penh by Bicycle