Olympia is an ancient village in Elis, the western side of the Peloponnese in Greece. This famous village and the ruins of an archaeological site near it are among UNESCO world heritage sites.

The remnant of the Olympia site is located 500m south of the Olympia village and near the Kladeos river, Greece. This site contains almost 70 noticeable constructions, monuments, and sculptures. The site’s main building is the Temple of Zeus, but only stones of it are left on the ground. This site attracts a host number of tourists every year and is famous for its legends.

It is widely believed that Zeus started the first round of the Olympic Games to honor defeating his father Kronos at wrestling. Thus, Olympia is the origin of the fire lighting that holds a series of sports competitions that still brings nations together almost 2800 years ago.

The great temple of the god Zeus was built next to the sports constructions because the ancient greek admired the gods before starting their games. Unfortunately, the Byzantine emperor, Theodosius, put an end to the Olympics in 394 AD as these games were a pagan ritual.

Centuries later, in 1896, with the idea of the French baron Pierre de Coubertin. Some believe that the site was occupied about 1500 BC, and a religious group, which worshiped Zeus, emerged around 1000 BC. No buildings or other monuments are left from this far ancient period, and the history of the site remains controversial.

It is worth to be mentioned that the first official Olympic Games were held here by the governors of Elis in the 8th century BC. However, the first proofs of construction on the site date back to 600 BC, the main changes to the Olympia were made almost one century later, in 700 BC, which included leveling the soil and working on new wells.

How to Get there

There are several ways to get to this small town. You can book a tour from Athens and join them in visiting the site and the village.

There are daily buses from three destinations that take you to Olympia. KTEL buses travel from Kyllini and Pyrgos. Here is the link to the KTEL website, where you can find more information.

Apart from that, there is a private bus service from Katakolon named Katakolon Express. You should book a cruise beforehand (at least one week earlier) on their website.

Also, you can drive your private car from Athens or rent a car. To get to Olympia from Athens by car, you should drive via the Greek National Road from Athens to Patra and then go to the road which reaches Pyrgos and then Olympia. Olympia is about 340 km far from Athens.

In the summertime, specific roads are available from Katakolon port to Olympia. To reach more information visit: www.trainose.gr

There is no airport available in Olympia. The nearest airports are in Patra and Athens. The airport in Patra only has flights in the summertime. On the other hand, the airport in Athens is available all the time. 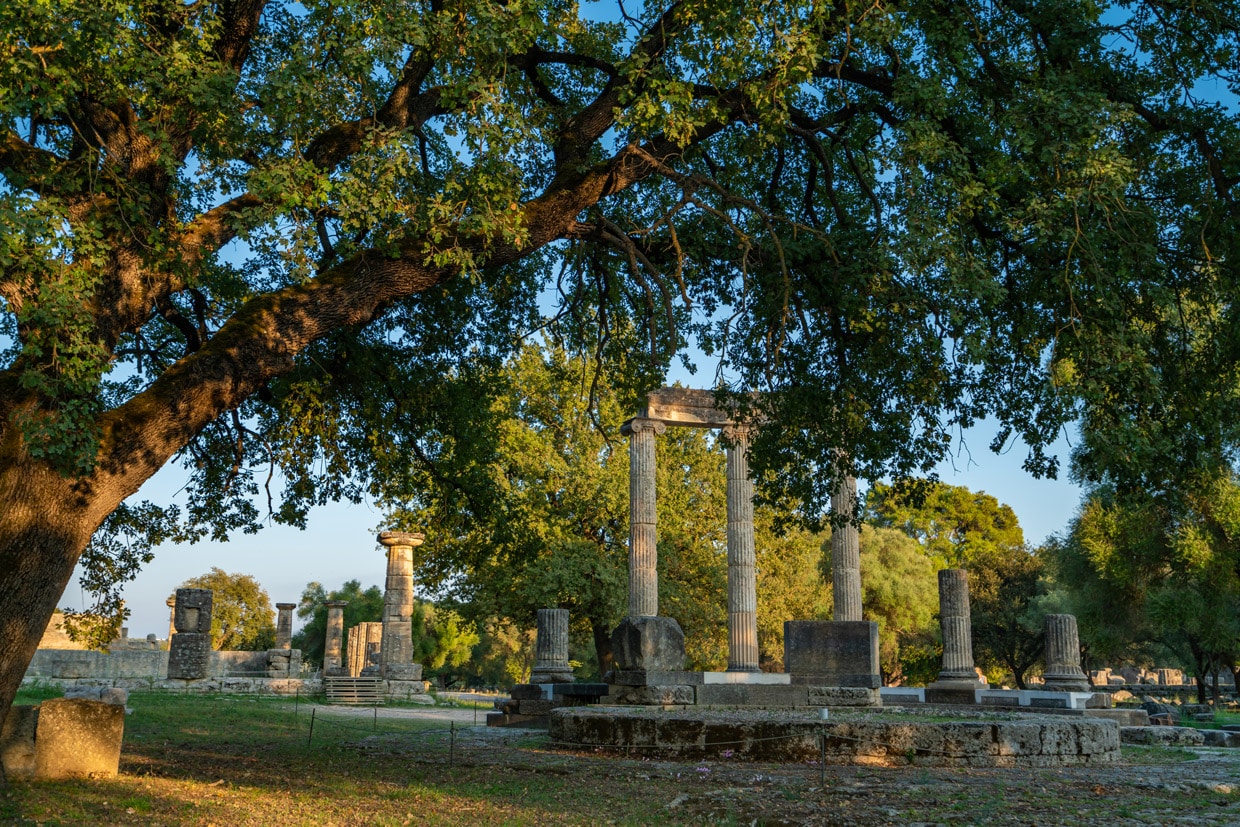 The best time to visit Olympia is during spring, from April to June. Also, you can travel there during the autumn, from September to October. At these times of the year, the temperature is mild, and there are fewer visitors. The most crowded months of the year tend to be July and August.

There is an entry fee that you should pay in order to visit the Archeological Site and the Museum of Ancient Olympia. Tickets are combined and enable you to visit both of these areas. The price of a combined ticket for each person is 12€. If you are an EU citizen, you can enjoy the reduced tickets. Also, those who are aged under 18 and students with EU student ID can visit the site free of charge. 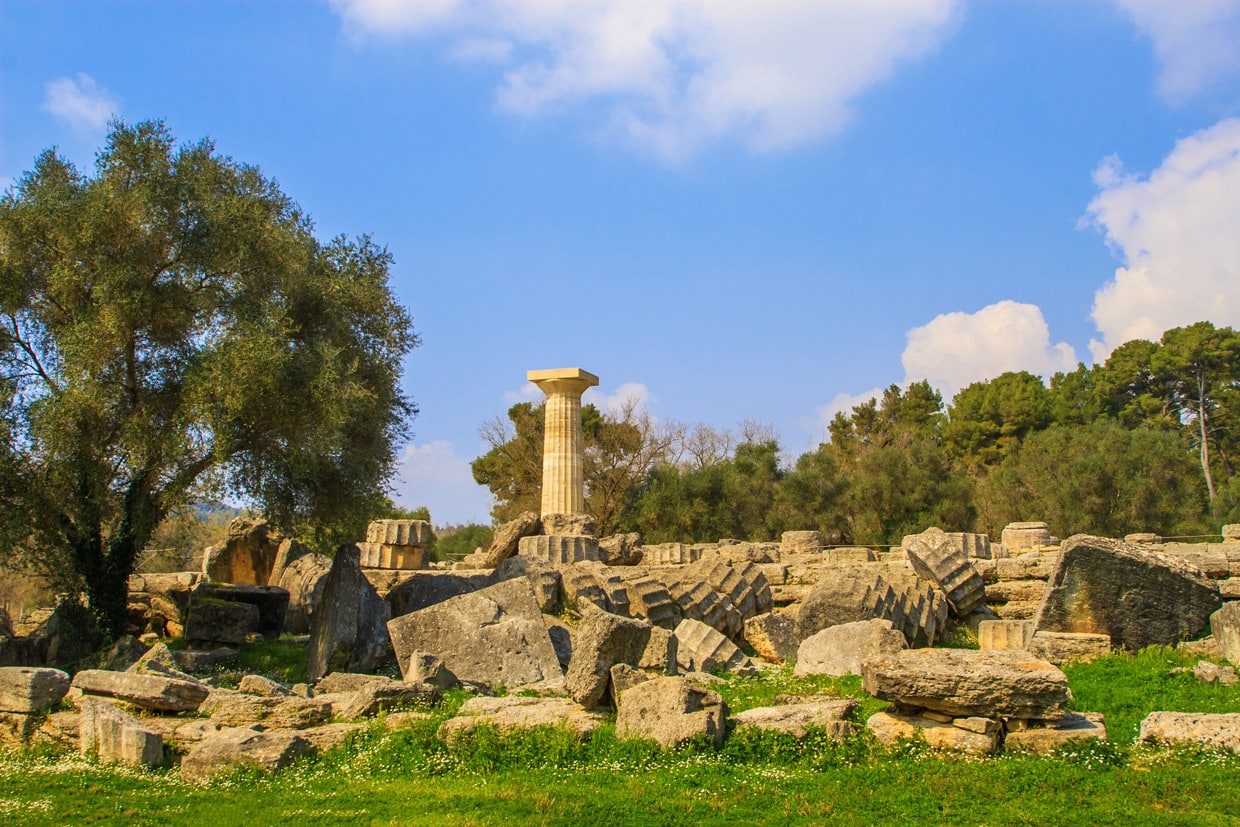 On the archaeological site, there are still various monuments left which you can enjoy visiting. Here is a list of them:

As we said previously, ancient greek used to worship the gods before starting their race. So, the sanctuary of Zeus is located near the stadium. This temple was constructed in the 5th century BC out of marble and limestone. According to the historical narrations, there used to be a great golden sculpture of Zeus inside the sanctum.

This temple is located in the west of the temple of Hera; it was devoted to Zeus by Philip II of Macedon, and there is a chryselephantine in one of the buildings. The material of chryselephantine is important since it was also used for the figure of Zeus at Olympia. The fact that Alexander is portrayed here is also significant since Philip had seven wives, and after his demise, other people may have demanded the throne. He made it clear _by placing Alexander’s figure in the statue_ that his heir should be him.

The palaestra is located in the west of the Altis enclosure and close to the river of Kladeos. This place was constructed in the 3rd century BC as part of the Gymnasium and was a sports field for those who wanted to practice boxing, wrestling, and jumping.

The Archaeological Museum is among the most famous museums in Greece and includes monuments found on the ancient site and from other findings in the area. The most renowned sculptures of the museum are the statues of Hermes of Praxiteles and of Nike Paionios.

The Bouleuterion, also called Council House, is one of the most ancient and noticeable constructions of Olympia. It was the place for the Elean Senate, which was responsible for organizing the games.

This museum holds the findings of ancient games in the area and is located in the old archaeological museum.

Here is the place where numerous Olympic games were held in ancient times. The running track of the stadium is almost 200 meters long and over 30 to 34 meters wide.

You can find great audio-visual exhibitions (in Greek and English) here in the museum.

This temple is among the oldest sanctuaries in Greece. This temple was built in the 7th century BC and was devoted to the goddess Hera, according to the Dorian style.

There are various lodging facilities to comfort your stay in Olympia. Here are two of those many.

This is a 4-star hotel and is only 1km far from the archaeological site of Olympia.

This is a 4-star hotel that provides visitors with a great cafe and restaurant, swimming pool, and perfect scenery. 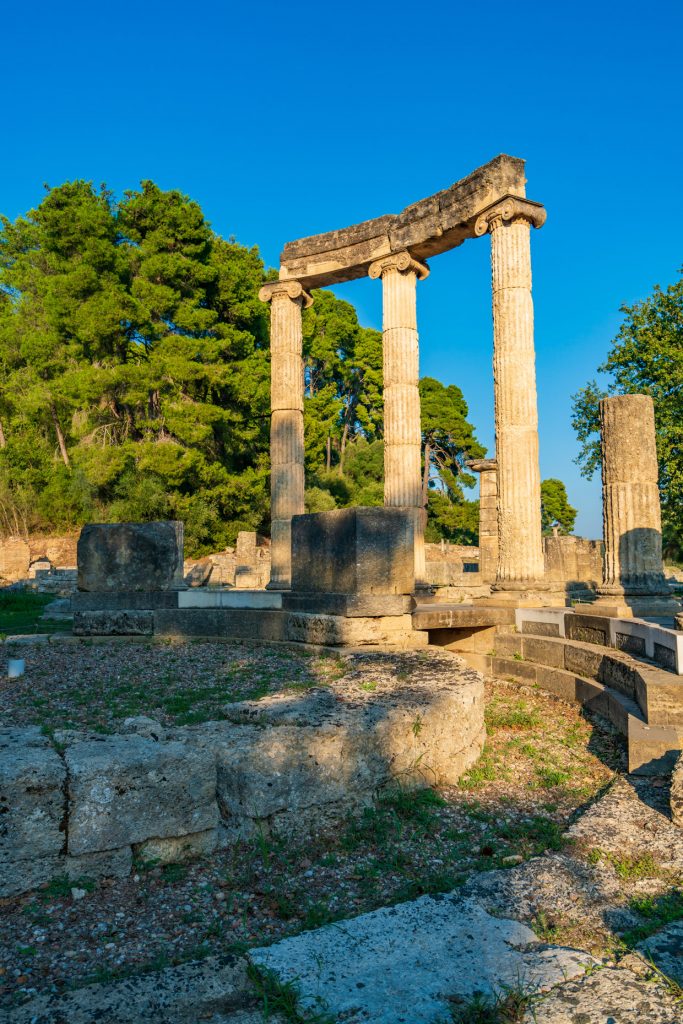 This restaurant is almost the most popular restaurant in Olympia. You can enjoy grilled food and offers for vegetarians.

This local restaurant is run by a family and is totally budget-friendly. It delivers food to your residence in Olympia free of charge. You can enjoy eating local and homemade food here.

Here local, fresh, and organic food are always prepared. There are choices for meat lovers and also for vegetarians.

A Week in Sri Lanka