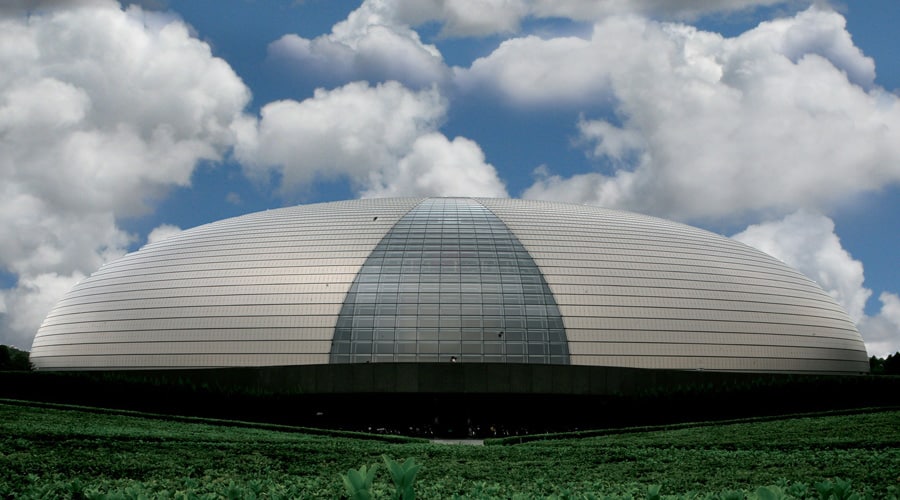 National Centre for the Performing Arts in Beijing

Constructed in 2007, National Centre for the Performing Arts is the complex of a grand opera house, concert hall, and theater located in the heart of Beijing.
November 29, 2022

Located in Chang’an Avenue of Xicheng District, National Centre for the Performing Arts (AKA the National Grand Theater or NCPA) is an amazing art center in Beijing, China. Its unique and attention-grabbing architectural layout was designed by a French architect named Paul Andrew. NCPA’s main building is composed of 3 performing venues namely the Opera House, the Concert Hall, and the Theater.

This big dome has underwater corridors, an artificial lake, an underground garage, and a green space. Its area is covering 29 hectares (around 12 hectares). The construction started in December 2001 and was completed in September 2007. Nowadays, the building is thought to be the deepest architecture in Beijing because of its deepest point of -106.6 feet or -32.5 meters. That is equivalent to the height of a 10-floor structure. The National Centre for the Performing Arts offers a very sharp contrast to its environment, having an oval exterior surely makes it eye-catching.

The National Centre for the Performing Arts exterior is a steel-structured oval shell made of ingenious material integration of more than 18,000 titanium plates and more than 1,000 sheets of ultra-white glass. It indeed creates a vibrant graphic effect as if the curtain is drawn apart slowly right before your eyes. It is considered the largest dome in the whole world with its 6,457 tons of weight and 696 feet or 212 meters of axis. The center is bounded by a crystal-like artificial lake that does not turn into ice in winter. 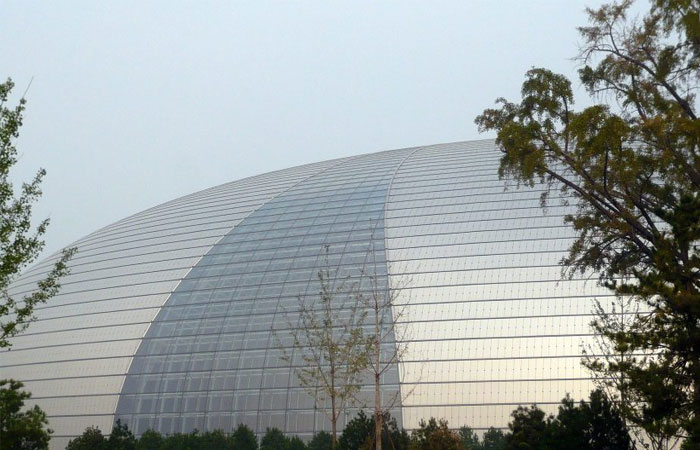 The performance venues of the National Centre for the Performing Arts including the Opera House, the Concert Hall, and the Theater have separated areas linked by air corridors.

Probably the most magnificent building inside NCPA is the Opera House with a main hue of gold. This is where operas, ballets, dance dramas, and large-scale shows are being performed. It has a total of 2,091 seats but there is also a standing room available. The auditorium’s arc-shaped metal-net wall permits lights and shadows to change according to the progress of the performance.

The audiences can effortlessly immerse themselves in the inventive atmosphere of the theater. The seamless ballet stage’s surface is the largest in China and is made of Oregon timber. The stage also has a three-layer structure that gives good resilience and protection to the performers’ feet.

The theater’s design has a distinctive Chinese traditional style. It is where you can be the audience of the stage plays, operas, and national songs & dances. Excluding the orchestra, the theater has a total of 957 seats. Its walls are flameproof because of the Zhejiang’s silk placed on them. The theater’s stage not only provides a great venue for Chinese traditional operas but also gives a feeling of closeness between the performers and the audience.

The conditioner’s air inlets are built under the seats so the audience won’t feel the wind but enjoy the coolness while watching the performances. It also has equipment for noise elimination so that no noise will be heard when anyone leaves while the performance is going on.

Also, feel free to share your experience and thoughts about the National Centre for the Performing Arts with us. Besides, if you are planning to visit Beijing, you can leave your questions and our professional guides will reply as soon as possible.