Nanluoguxiang, aka South Gong and Drum Lane, is an 800-years old hutong in Beijing in which, a wide range of modern and ancient shops are lined up.

Nanluoguxiang, also known as the South Gong and the Drum Lane, is one of the old hutongs in Beijing, which is well-known for its boutiques and unique foods. It measures 768 meters in length and 8 meters in width. The south end of the lane is linked to Di’anmen Dong Dajie and its north end is connected to Gulou Dong Dajie. (Photo by © Fabio Achilli via Flickr)

On each side of this old alley, there are eight parallel hutongs. The main street, as well as its sixteen lanes, were included on the first list of the twenty-five historic and culturally protected areas in November of 1990 issued by the local Municipal Government. It is a very convenient place to reach since it is just located in the downtown.

Built about 800 years ago, Nanluoguxiang was constructed in the same period when the Yuan Dynasty’s capital (Dadu) was constructed. Its side hutongs were also built in the same year. As it has one body and 16 mini streets on each side, locals also call it the Centipede Lane.

It was also known as the Luoguo Xiang or Humpback Lane during the Ming Dynasty but renamed Luogu Xiang or Gong and Drum Lane during the Qing Dynasty. This alley remains to be the most complete than the other cultural and historical heritage sites in Beijing, witnessing the variations of many dynasties.

The South Gong and The Drum Lane

If you want to see and experience an authentic courtyard, the South Gong and the Drum Lane is the right place for you. This alley boasts the most complete lane of old-fashioned courtyard dwellings in Beijing. When you visit this place, you will certainly see the red lanterns hanging under the roof spaces. You will also find an obvious trace of ancient but prosperous Beijing in this alley.

Here, the styles of architecture are totally different from that of the Forbidden City’s. Nanluoguxiang’s walls and roofs are gray that represent the folk culture in contrast to the imperial city’s grand red wall and gold roofs which depict royalty.

This lane is very close to the Forbidden City and that’s why most of the royal families and officials lived here. For instance, Wan Rong, China’s last empress had heir former residence in Mao’er Hutong. There are also historical celebrities who had their dwellings here such as Qi Baishi, a very popular artist for his traditional Chinese paintings.

Even though this is a historic place, Nanluoguxiang’s culture is full of innovation. It welcomes its visitors with a combination of an old appearance and a mixed culture of China and the West. The specialty shops and boutiques here are very appealing to both locals and tourists.

Located at No. 23, Le Tian Tao She is a pottery store where you can delight in sipping a cup of coffee while witnessing the potters do their craft. You can even try to create your piece of pottery. A lot of people would go here to see the place’s creative culture and artistic environment. Art studios are also housed in this street where you can watch movies or TV drama programs. Today, there is a total of 115 varied shops in this lane where the owners and some shop assistants can speak English fluently.

The food offerings in the Nanluoguxiang are something that will also appeal to its guests. The popular dining hall at No. 108 sells delicious pizza and Nepal-style drinks. At No. 49, there is a time-honored specialty yogurt shop called Wenyu Nai Lao. Besides, at No. 114, you can find a western restaurant called the Yu Shi Ju Jin offering different delicacies from Russia, Italy, and India. In addition to the restaurants, there are also several bars in the South Gong and Drum Lane that are worth visiting like Plastered 8 and Guo Ke. 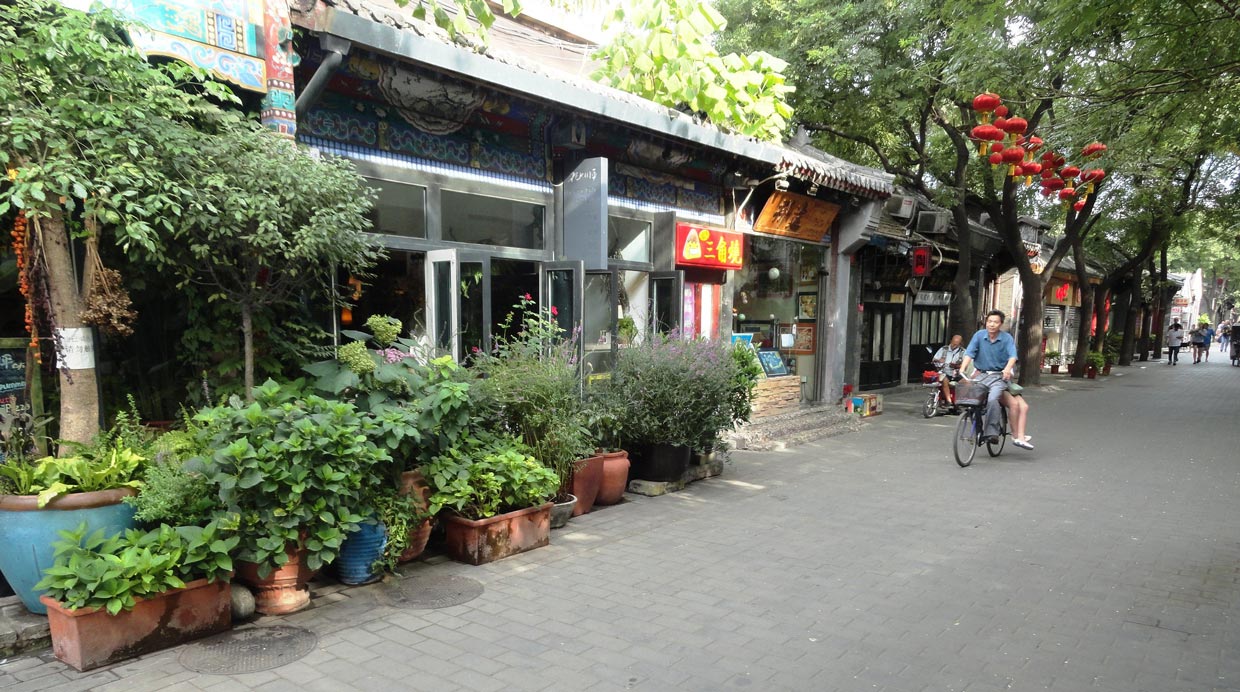 This place has not any parking and the best way to roam around is on foot or by bicycle. There are bicycles for renting in Houhai or Shichachai. A tandem bicycle would cost you CNY 20 per hour while a regular bicycle costs CNY 10 per hour. For each bicycle, a deposit amounting to CNY 500 is needed.

As a tip, if you are going to visit Nanluoguxiang, try to wear flat shoes or rubber shoes since you will be walking a lot. Have you ever visited any hutongs in Beijing? Feel free to leave your comments and thoughts! Besides, our professional guides are prepared to reply to your questions about this fantastic hutong as early as possible.