Mykonos is an outstanding island in Greece. By the time you get into the island, you face a wide variety of natural and man-made attractions. From outstanding sand beaches to several windmills, museums and bars, and clubs, Mykonos holds a great number of spectacular sights in store for visitors.
In This Article
History and Mythology
Climate
Best time to visit Mykonos
How to Get There
Attractions
Nightlife
Restaurants
Accommodation
Souvenirs

Mykonos is an island located in the Aegean sea and is a part of the Cycladic island chain, Greece. This wonderful island faces the south of Tinos island, north of Paros and Naxos islands, and east of Syros and undeveloped Rinea island. The population of Mykonos is almost 12,500 and regarding the size, it takes almost 40 minutes to drive from the eastern end of the island to the western end of it.

There are some stories about the origin and history of the islands. One of these widely believed stories is that the island was a result of a great war between Zeus and the giants. Hercules, the son of Zeus, managed to kill these invulnerable giants and throw their corps into the sea, where they turned into stone and shaped what we today recognize as Mykonos island. Also, some hold the idea that the island was named after its first monarch, Mykonos. It is the name of a local hero, who is said to be the son or the grandson of whether a king in Delos or the god Apollo and her wife goddess Artemis.

Similar to other islands in the Aegean sea, Mykonos`s weather is hot and dry in summer and cool in winter. The rainfalls are rare during the summer, but from October to April, it may rain mildly. Conversely, the Cyclades islands are renowned for their continuous wind, which is called Meltemi. This phenomenon is more common in July and August. 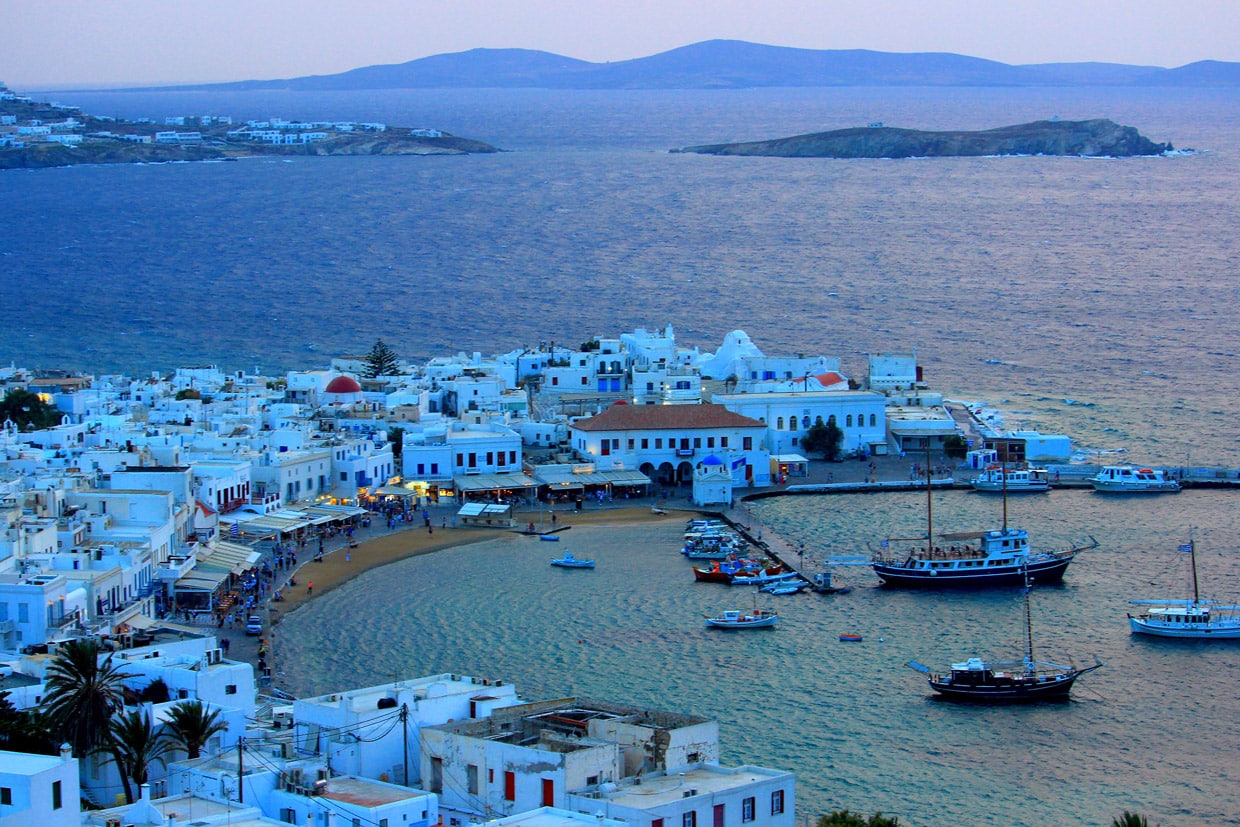 Pertaining to the weather, the best time to visit Mykonos is between June and September. During this period, the weather is pleasantly warm and sunny, and you can enjoy being at beaches and going swimming. On the other hand, If you are concerned about a more economical journey, the best time to visit the island might be April, May, and October. The price for hotels and other accommodations is more economical in these months. Other features like transportation, food, and drink do not change noticeably by season. So, it depends on your own priority to choose the best time to go. 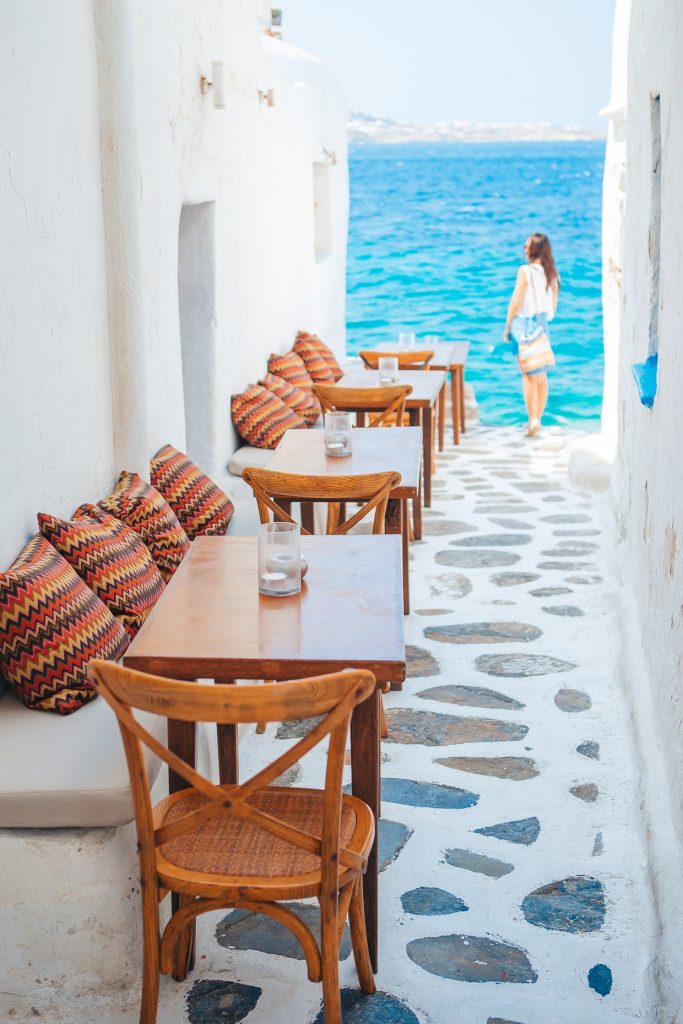 There are several ways to get into the islands. You can use boats, ferries, and fast catamarans because these means are accessible every day from Piraeus and Rafina. The fast service takes half the time but is more expensive. In addition, you can enjoy a sea trip via cruise ships, which arrange different tours of Greek islands.

A large number of these cruise ships dock at the new port in Tourlos village, and some of them more to the old part. You can also fly to the island. There is an airport in Mykonos which is not that far from the main town. There are day-to-day flights from Athens airport which are provided by Olympic Airline and Aegean Air. 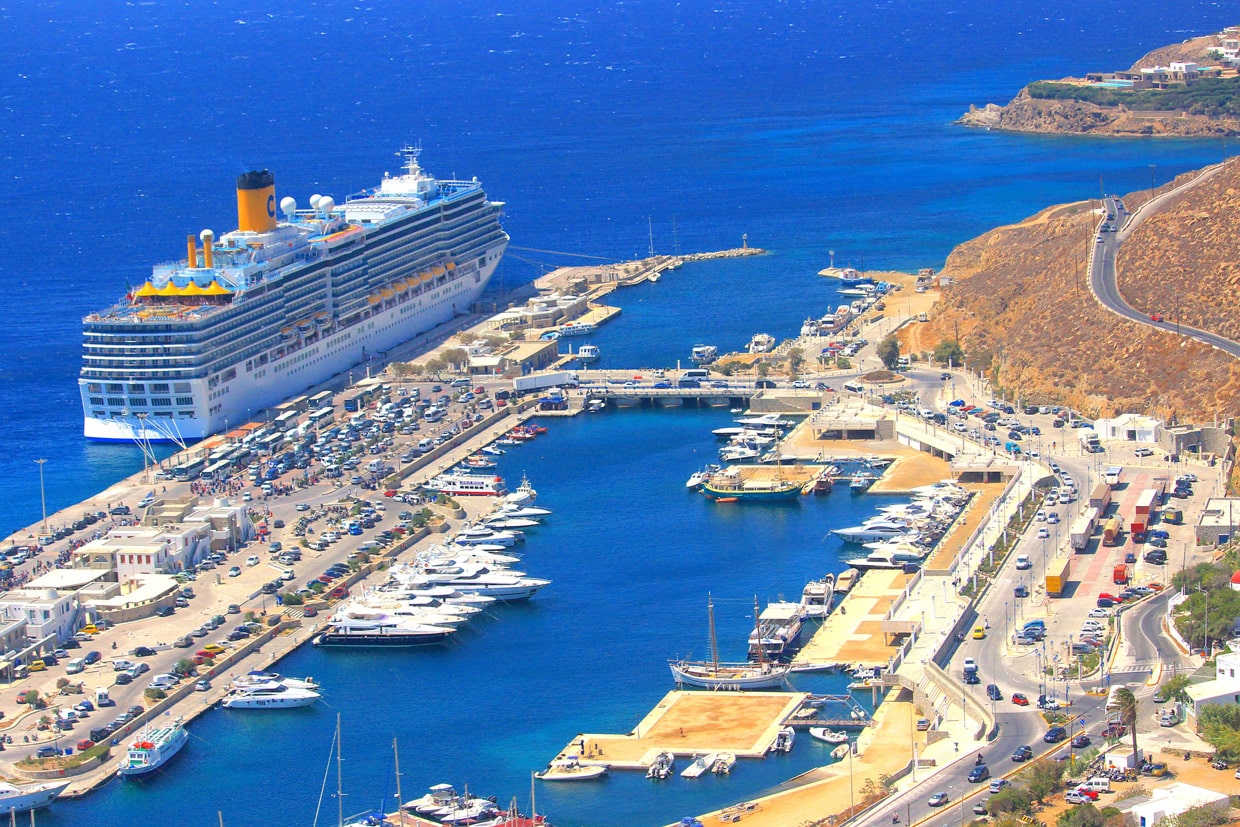 Every year, a host number of visitors travel to Mykonos in order to enjoy its scenic beaches and swim in its limpid water. Almost at every beach, you can find places to eat and drink and also beach chairs and umbrellas. The most popular beaches are located in the south part of the island. 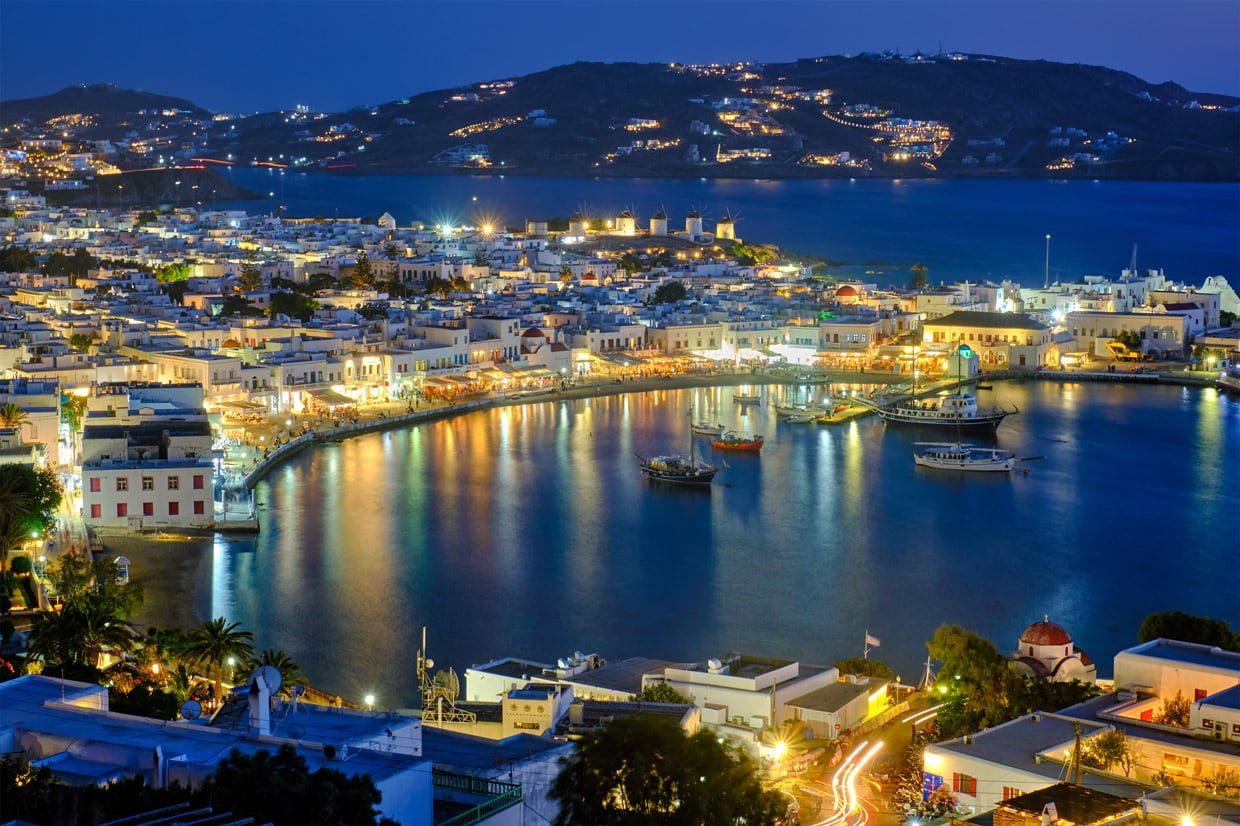 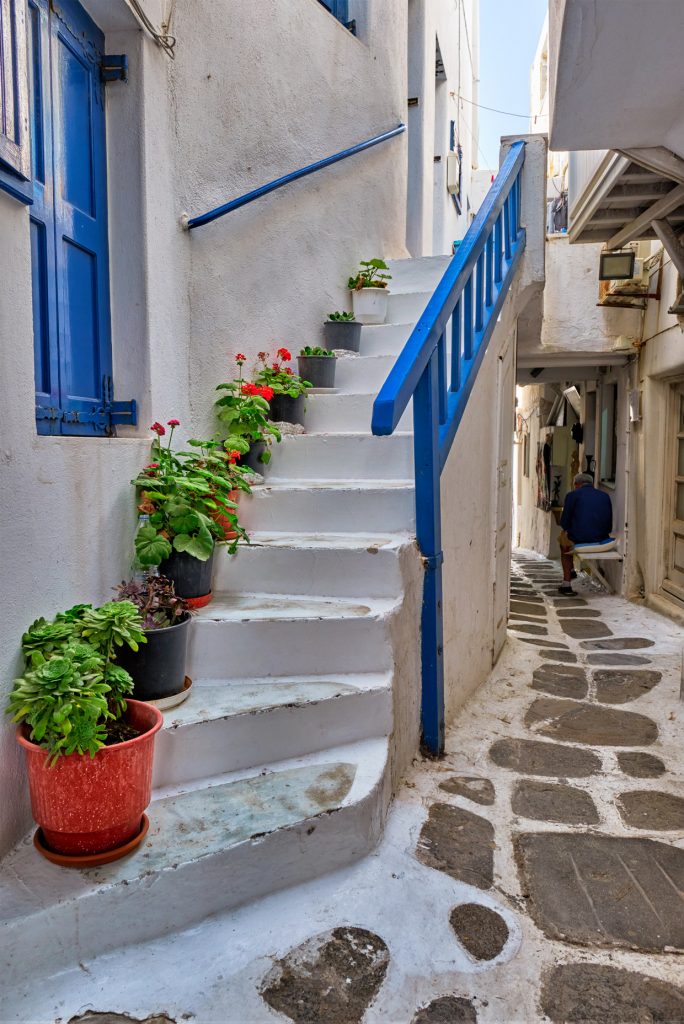 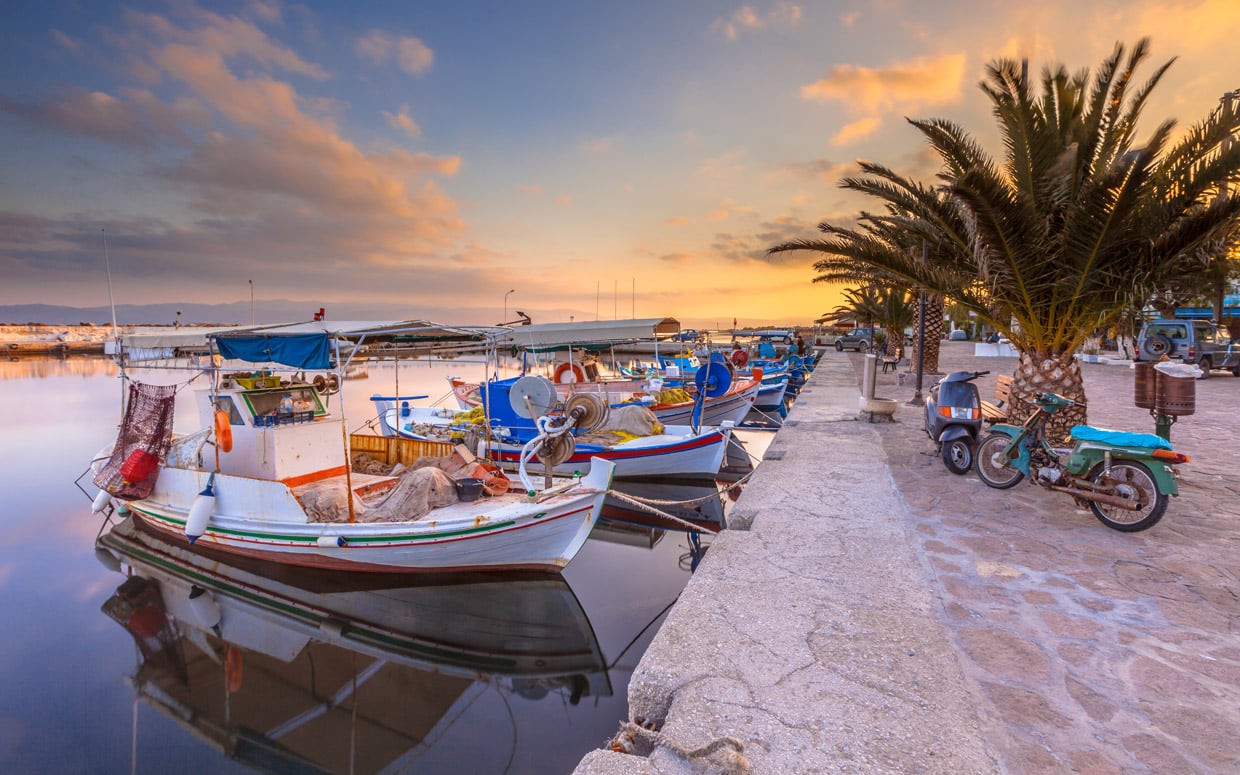 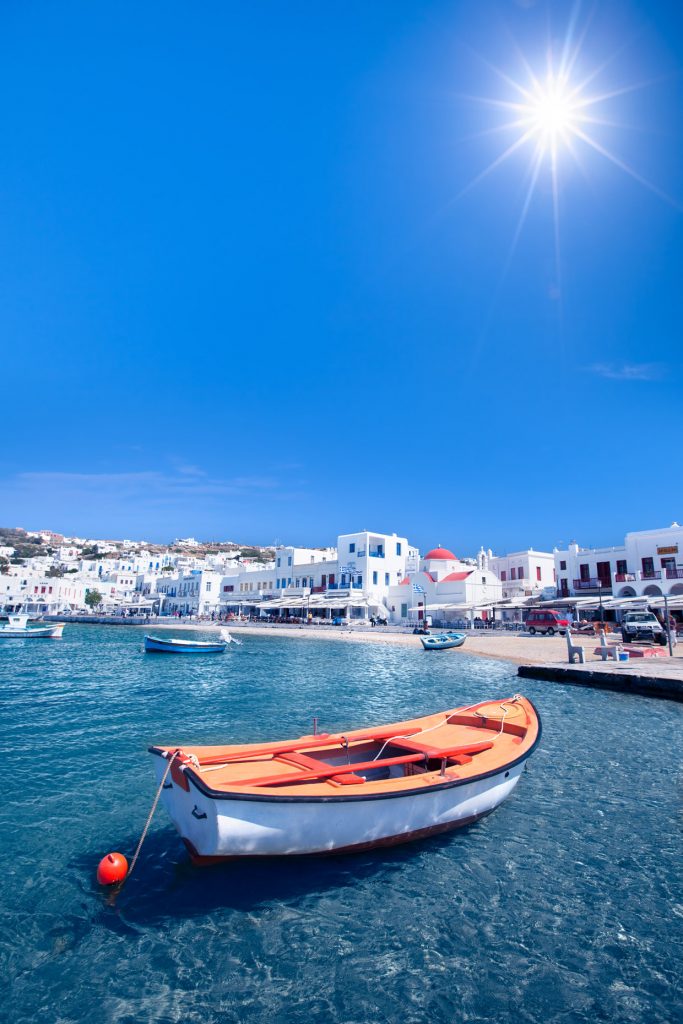 This bird is the amulet of the island and can be seen in the harbors or even in the town. Initially, the pelican was found injured on the coast of Paranga in the 1950s by a local angler. The pelican was healed and taken care of by locals and remained on the island.

Soon, people gave the name of Petros to it. Unfortunately, Petros was hit by a car in December 1985 and got killed. At the moment, there are three pelicans living on the island, and one of them has been named after Petros.

Little Venice is an area that consists of two or three-floor houses with vivid balconies made of wood, Constructed on the sea. Here you can sit in an outdoor bar or cafe and, while enjoying the sunset, drink a great cocktail or any other drinks that you like. Also, you can find some small stores here.

There are seven windmills on the islands that are considered one of the most renowned symbols of Mykonos. They were built in the 16th century by the Venetians with the objective of producing wheat. From this area, you have a fantastic view of Little Venice. It is interesting to know that this place is one of the most beautiful locations to watch the sun going down. 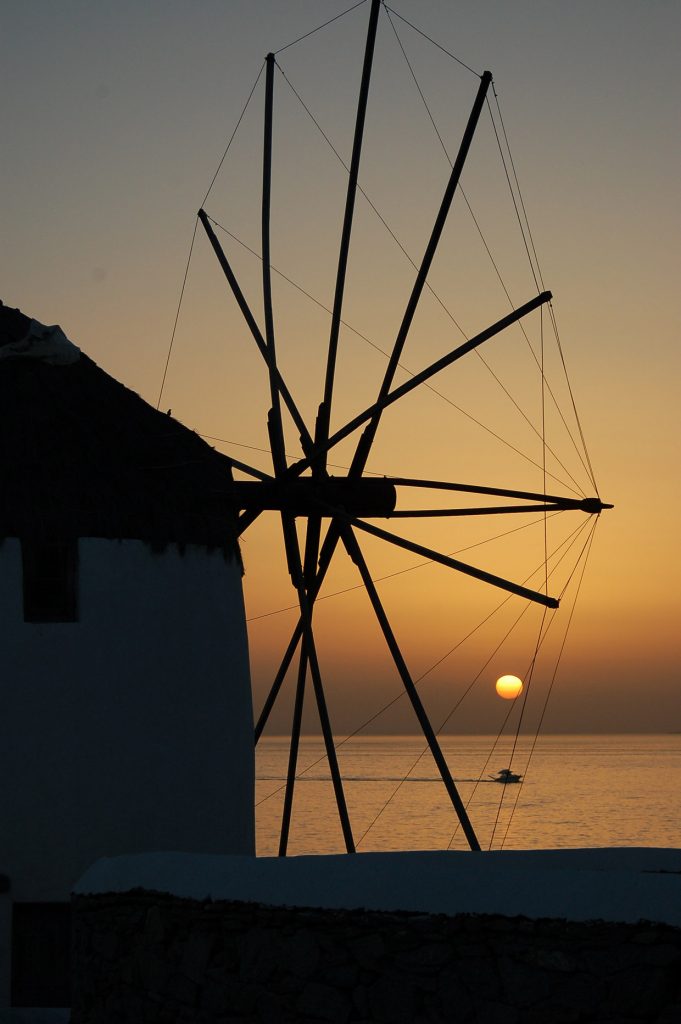 Archaeological Museum of Mykonos Open to visit every day from 8:30 AM to 3 PM, closed on Mondays. Here you can see a host number of stelae, cemetery sculptures, and pottery which dates back to the prehistoric era and continues to the late Hellenistic age.

Folklore Museum is open to visitors every day from 4:30 PM to 8:30 PM, closed on Sundays. This museum is located in an 18th-century house, and its collection consists of furnishings, symbols, statues, Local music instruments, Clothes, and fabrics.

Lena’s House Museum is a great place to visit and is open every day from 6:30 PM to 9:30 PM, closed on Sundays. This museum is a real Mykonian residence that has been totally repaired and is an authentic representation of a dwelling in 19th-century Mykonos.

Aegean Maritime Museum, Open to visit every day from 10:30 AM to 1 PM and from 6:30 PM to 9 PM. A collection of marine equipment and old vessels.

Galleraki bar is located in Little Venice and provides customers with great scenery of the sea and tasty cocktails with fresh fruit.

Scarpa bar and club is in Little Venice and is popular among tourists for about 40 years. It offers a large variety of cocktails and alcoholic drinks. Also, you can get there in the afternoon and enjoy the sunset while drinking. After sunset, the dancing will start and continue till the next morning.

Jackie O`Town bar is the most famous gay bar in Mykonos. Visitors can enjoy Drag Queen shows which are held every night.

In Little Venice, Katerina bar is owned by the first female captain in Greece and her siblings. They offer food to their customers as well and have a restaurant in their house.

Alley cocktail bar offers you a local atmosphere with a great variety of cocktails made out of local foods and herbs and changed due to the season and taste of customers. Also, you can enjoy the soul and jazz music which is played in the bar.

180 Degrees Sunset bar is located in a stone castle and offers a great scenic sunset of the old port and the sea. It has an open-air area as well and provides visitors with different cocktails and wine.

Skandinvaian bar and club offer a lively nightlife, especially for younger folks. Its great cocktails and open-air space for dancing attract lots of visitors each year.

Queen of Mykonos is a renowned name among visitors to Mykonos. You can enjoy high-quality cocktails and later at night dance to the beat of professional Dj. We should mention that this bar and club is a little bit more expensive than the other ones. Gay visitors can find a proper atmosphere here.

Cine Manto is an open-air cinema at night where you can watch movies and in the meanwhile drink beer, wine, cocktails, and other drinks. 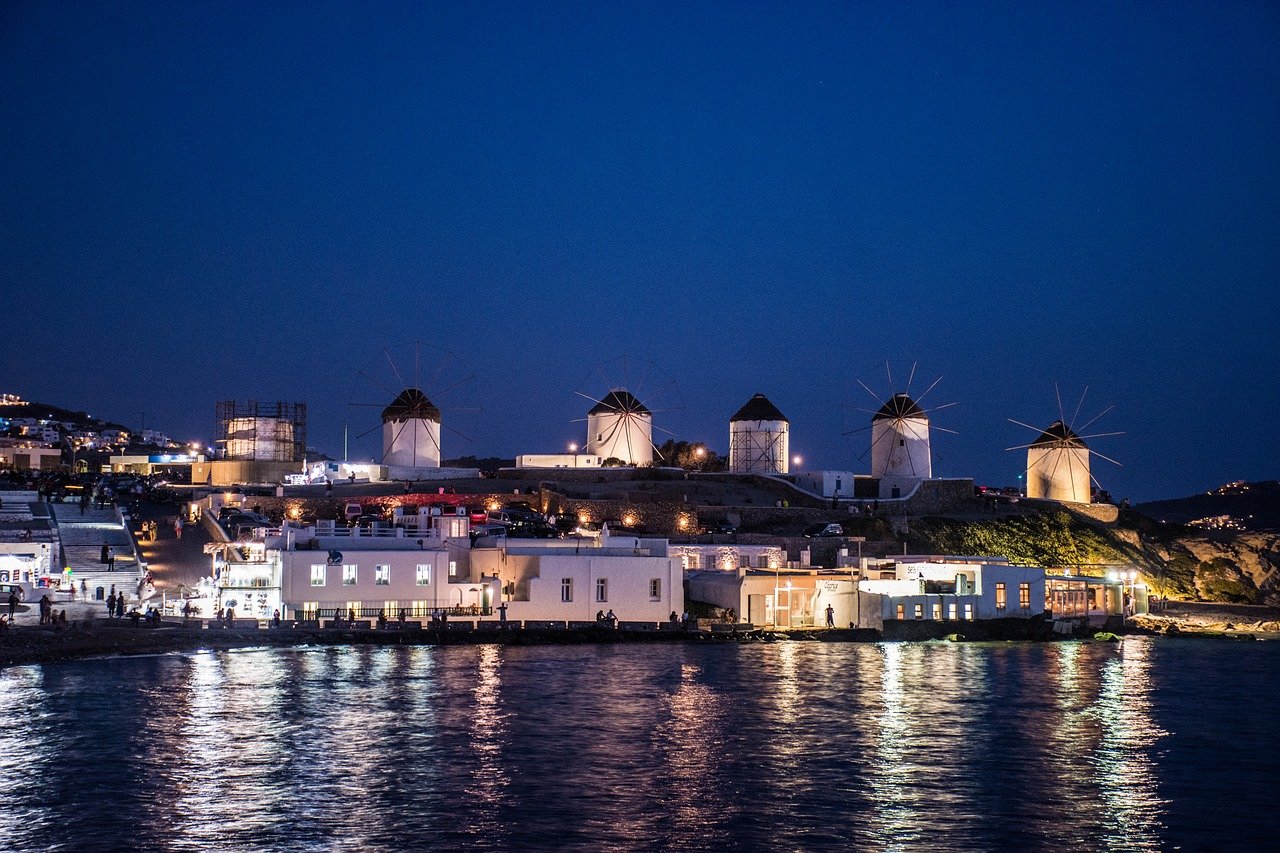 Here in Mykonos, you can find local and international restaurants almost everywhere. Either on the beaches or in the town, there are places to go and buy food at a reasonable price. Almost all of the restaurants and cafes mention their menu prices on a board outside their building; So, you can choose a more affordable place to eat while you are walking around. It is worth mentioning that those restaurants that are located inside the town tend to be cheaper and those which face the docks or the sea, specifically those in Little Venice, are higher in price. Here we provide you with a list of restaurants and their locations. 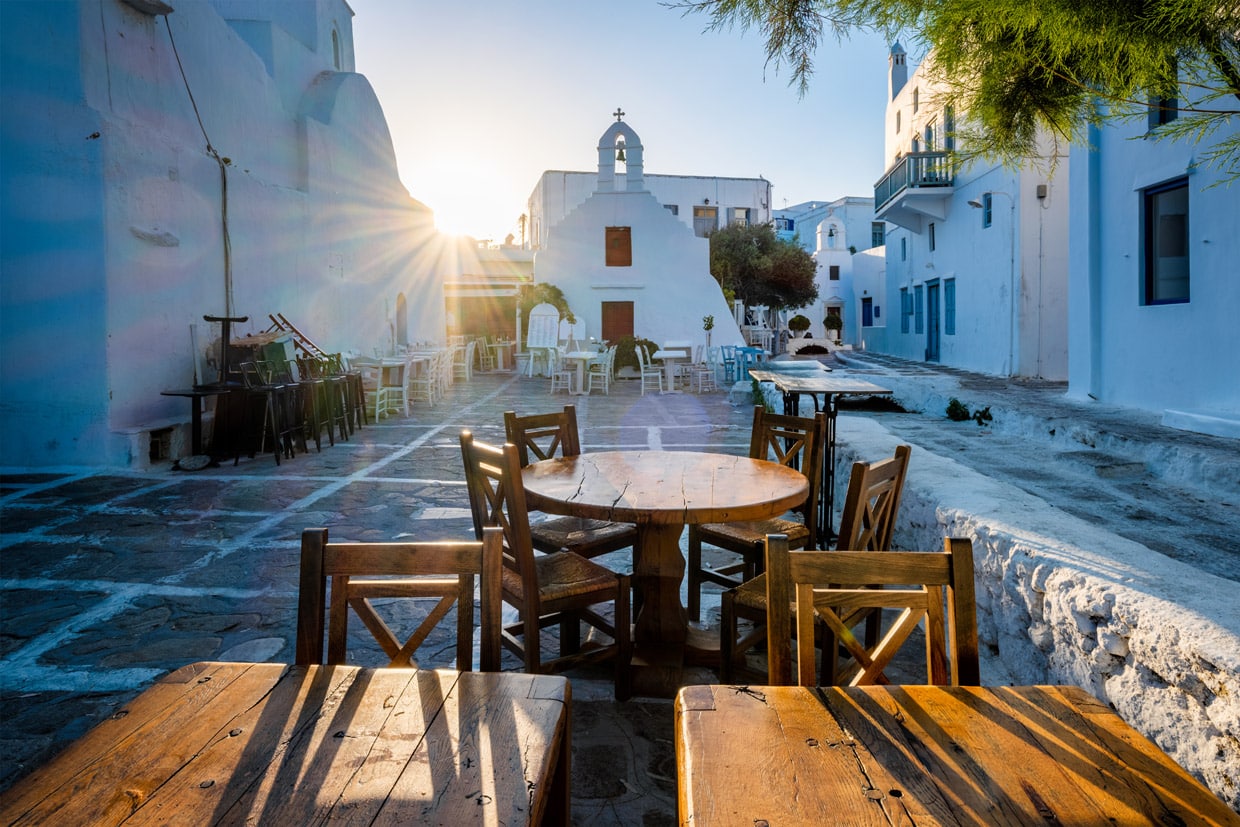 All around the Mykonos, whether in the town or near beaches, you can find a host number of hotels, residences, apartments, rooms, or hostels. Also, there are two campgrounds in Mykonos; one is located in Paranga beach, and the other one is in Paradis beach. In comparison with other islands in the Mediterranean sea, Mykonos is an expensive place regarding accommodation.

The costs of hotels and residences can differ according to the season. Since Mykonos expects a number galore of visitors from mid-July to late August, it is more reasonable to book a room before you start your journey. You can whether book online via hotel websites or via telephone. We should mention that a large number of hotels will no longer accept guests from the end of October to the end of April or early May. 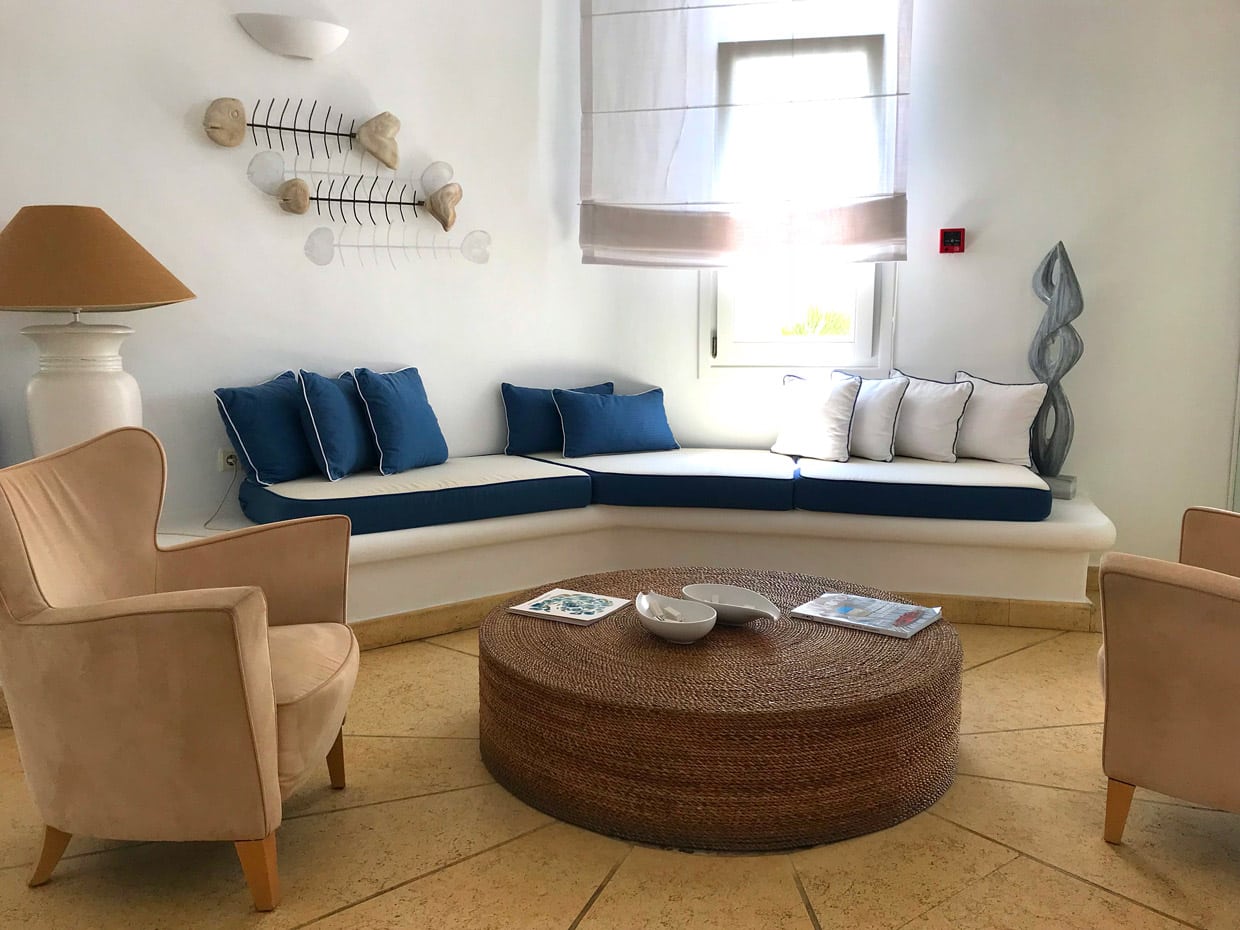 There are some local products that you can buy as souvenirs and bring them back with yourself. Handmade sandals, The evil eye or Mati, an icon who is believed to protect you from other people’s jealousy and envy, Louza, the Mykonian pork, which is available both in restaurants and shops, Local and handmade jewelry such as necklace, earring, and so on.