Mount Sinai – The Most Famous Mountain in Egypt

Mount Sinai is on Egypt’s the Sinai Peninsula near the city of Saint Catherine, and it’s known by many different names in Christian, Jewish, and Islamic literature. Har Sinai, Mount Horeb, Jabal Musa, etc., are just a few of them. Although the three religions differ in many ways, the three believe that God appeared to Moses and gave him the Ten Commandments on this mountain. In the sixth century, Prophet Muhammad also visited the hill, which made it a holy sight for all believers of the three faiths. Mountain Sinai can also be enjoyed by a visitor who is not a religious figure, as the hike is rewarded with stunning views of the surrounding high desert sceneries.

Mount Sinai is on Egypt’s the Sinai Peninsula near the city of Saint Catherine, and it’s known by many different names in Christian, Jewish, and Islamic literature. Har Sinai, Mount Horeb, Jabal Musa, etc., are just a few of them. Although the three religions differ in many ways, the three believe that God appeared to Moses and gave him the Ten Commandments on this mountain. In the sixth century, Prophet Muhammad also visited the hill, which made it a holy sight for all believers of the three faiths. Mountain Sinai can also be enjoyed by a visitor who is not a religious figure, as the hike is rewarded with stunning views of the surrounding high desert sceneries.

Although the 7,497-foot-high Mount Sinai may be the same one Moses visited over 3,000 years ago, there is no archaeological proof to suggest so. The identity of the holy mountain has been debated by some scholars because of differing interpretations of the route the Israelites took in their exodus out of Egypt. However, the belief held by all three churches is that it is the holy mountain mentioned in the scriptures. The burning bush is believed to have been ascended by Moses several times: once when God spoke to him from it and instructed him to seek help from his people in Egypt, and later when the Ten Commandments were given to him.

Christianity established its claim to the holiness of Mount Sinai in the 3rd century when Christian hermits began to live in caves on its flanks. Built just outside the mountain’s northern foot in the 6th century, Saint Catherine’s Monastery is noted for its magnificent artwork.

You have to hike 3 miles one way to the top of Mount Sinai. On a steady but not-too-steep ascent, you’ll hike 2.5 miles up the Camel Trail from the Monastery. This trail is well-used, wide, and flat enough to ride a camel. The journey along the way has many places for a break and for a view. It takes 750 stone steps to reach the top of the mountain in the last 1/2 mile.

Your trail will lead you down a different path than you took up. The steps leading down are known as the Steps of Repentance, comprising 3,750 stone steps. What’s behind the name of this trail? As the legend goes, a monk made the steps to repent for a sin he committed. This is why each step toward the end of the trail represents the place of his repentance. You can hike these trails easily! Whenever you feel fatigued, remind yourself that Moses was 80 when he ascended to the summit of Mount Sinai.

Although the path is very well marked, we recommend you hire a local guide. The guide can help you to make the most out of your time visiting there.

Take water and snacks with you on your hike. On the way to Mount Sinai, you can stop at a gas station for a bathroom break or buy these refreshments. The hike includes some Bedouin tents where you can get snacks and Bedouin tea. The tents are a bit more expensive, however.

It might be a good idea to bring a picnic meal to enjoy at the peak of the mountain. It’s an excellent spot for relaxing with a picnic meal, appreciating the views, and reflecting on this sacred place.

Although most tour groups visit this place during the night, you can also visit here with private guides during the day. When you hike Mount Sinai during the day, it is hard to escape the sun! While trekking in this beautiful location, don’t forget your sunscreen, so you don’t get burnt while enjoying the beautiful scenery.

It is advisable to wear comfortable walking or hiking shoes. You are still walking a lot on the Mount Sinai trail, even though it is not challenging. So it is essential wearing proper shoes.

Also, take a look at your weather app as you schedule your hike. Consider bringing a jacket or sweatshirt. While you may find the weather warm enough to go swimming in the Red Sea, up in the highlands, it can get freezing cold! 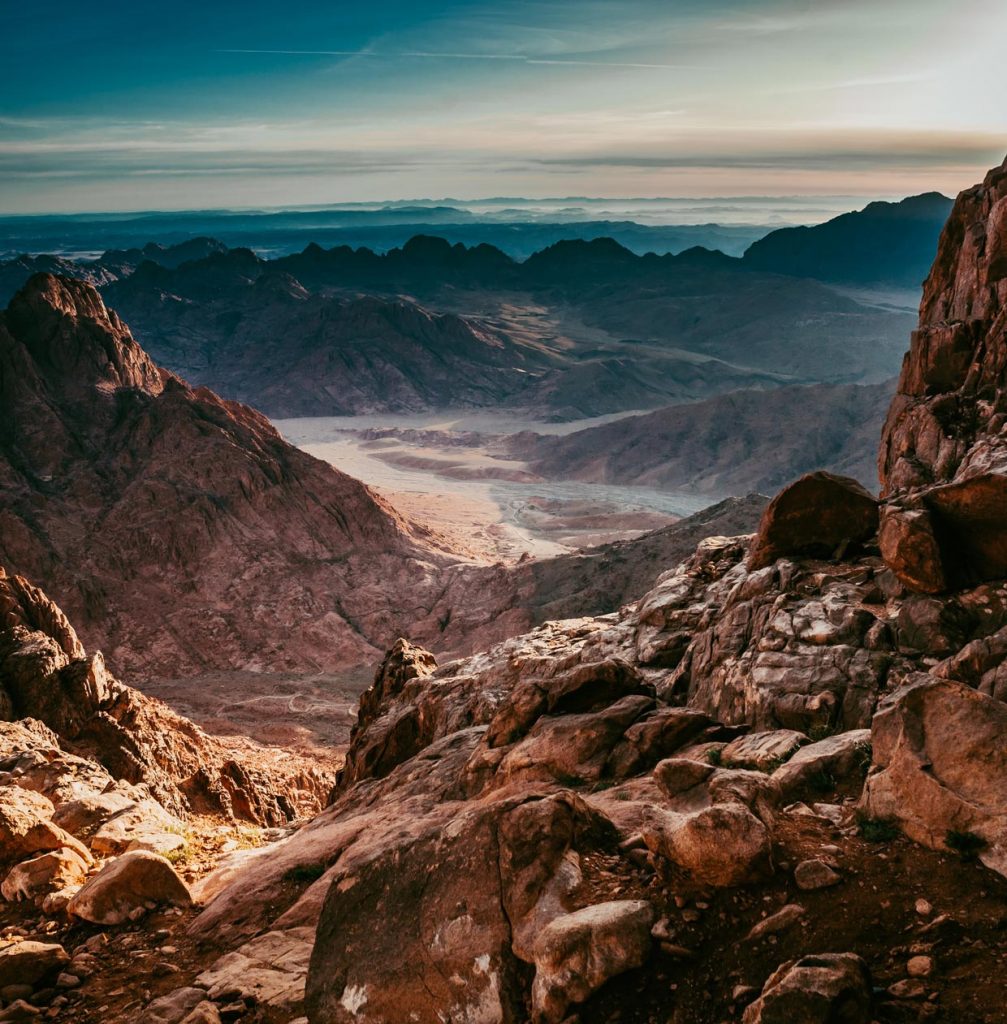 Despite the stunning view, there are also historic attractions to explore once you have approached the summit of the mountain. You can visit a historical mosque here, which local Muslims still pray in. A Greek Orthodox chapel dedicated to the Holy Trinity is also worth visiting. The chapel was constructed in 1934 on the ruins of the basilica built by Alexander the Great in the 6th century. The Church supposedly contains the rock on which God carved out the Tablets of the Law. But the Church is no longer open to the public. There are also two caves associated with Moses’s time on the mountain. Among them, one is the cave that God used to hide Moses from His glory when he provided him with the Ten Commandments. 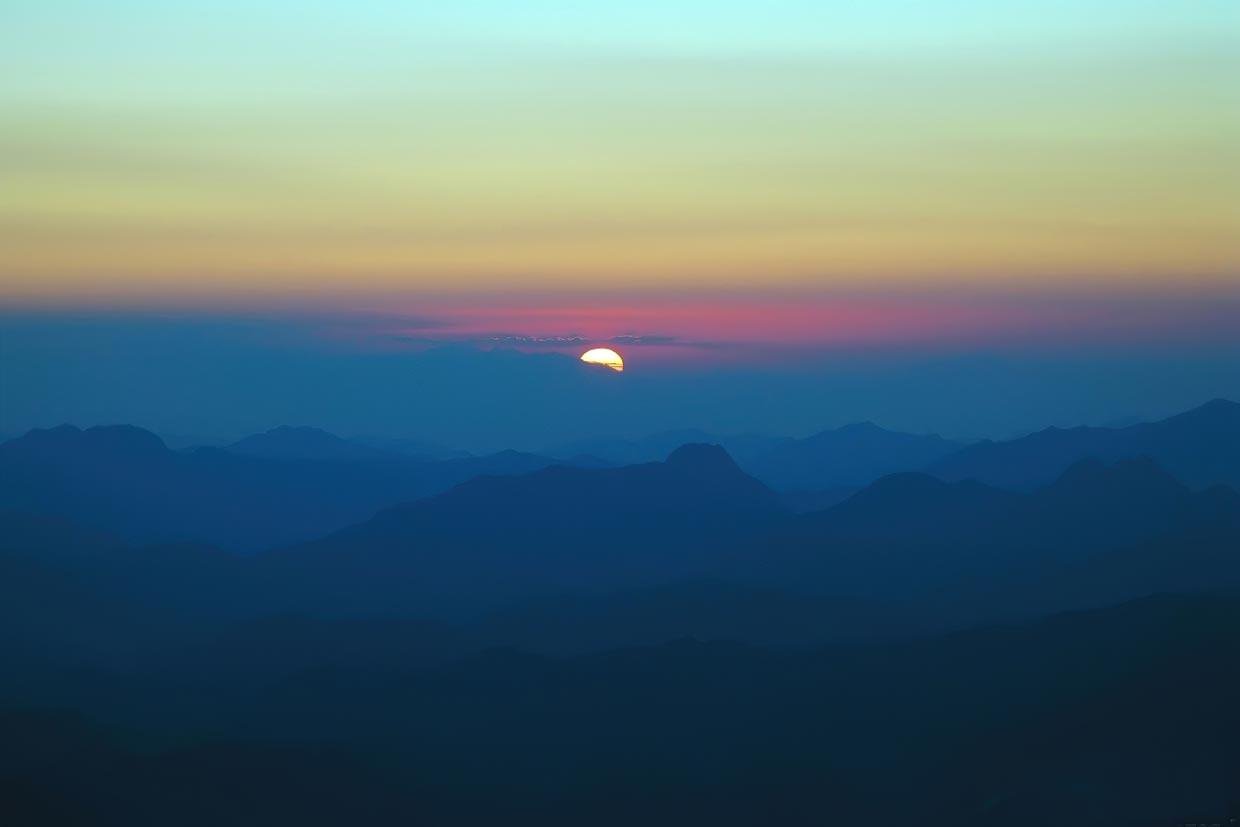 Touring the Saint Catherine’s Monastery would be an excellent complement to a Mount Sinai visit. The fortified complex is one of the most outstanding examples of Byzantine architecture and was built in 530 A.D. by Emperor Justinian. The chapel was constructed in order to protect an earlier chapel set up in 330 A.D. by the Roman Empress Helena near the site of Moses’ confrontation with the burning bush. It was Helena who gave birth to the emperor Constantine who would spread Christianity throughout the Roman Empire. Among the many plants that grow in the monastery grounds are rare brambles called Rubus Sanctus, believed by its monks to be the same kind through which God spoke to Moses.

Several buildings are located on the monastery grounds, including the first Church of the Transfiguration, as well as several smaller chapels, a museum, and a library. St. Catherine’s is among the oldest continuously inhabited Christian monasteries in the world. It also includes housing for monks of the Church. It is home to many treasures of priceless value, such as relics of Saint Catherine.

There are some very rare 5th- and 6th-century icons in the museum’s collection. It’s a world-famous collection of early Christian art. The library houses more codices and manuscripts than any other globally and is only eclipsed by the Vatican Library in number. One of these manuscripts is the Codex Sinaiticus, the earliest manuscript known of the Bible.

The Monastery is closely connected to the Muslim community, including even a mosque. In the 6th century, the Prophet Muhammad visited it and granted him formal protection in 623 A.D.

In this historical site, you can find an ancient fountain that supplies water to the Monastery. It is known that this was the site where Moses met his wife for the first time.

World-famous Shark and Jolanda Reefs can be found here, which are surrounded by stunning coral reefs around 20km west of Sharm El Sheikh. It’s a pleasure to snorkel just off the shore since the reef has incredibly varied corals, as well as an array of aqua life. The monotone terrain of Ras Mohammed, at the foot of the majestic Desert Mountains, is in sharp contrast with the glimmering lights of nearby Sharm, with its vast surface cracks caused by ancient earthquakes.

A divers’ paradise carved into a reef, a short distance north of Dahab lies Egypt’s most famous diving area. The Blue Hole is a gaping, steeply-drooping sinkhole. Its depth is said to be as deep as 130 meters. Experienced technical divers should explore the deeper depths, although there is plenty to discover up top. In the gap between the outer lip and the hole is a bunch of marine life. A good dive into the hole is quite similar to skydiving.

Divers with advanced skills may enter the Bells, a narrow breach in the reef table representing a small pool close to the coast. The diver descends through a chimney, exiting at 27 meters on a ledge that provides access to the open sea. From here, swim south along the wall, entering the Blue Hole at the saddle of the reef at 7 meters. The divers can make their way to shore by floating around the sinkhole, provided they keep a careful eye on their depth.

The Sinai peninsula generally has an extreme climate. During summer, beaches along the coast withstand temperatures of up to 50oC (120oF), while nights have the potential to be sultry or cool depending on the prevailing winds. Despite regular snowfalls in the winter and occasional rainstorms during spring, nights in the mountains can be pretty cold, if not freezing. So when visiting Mount Sinai, you might consider taking warm clothes despite the hot weather in surrounding regions.

Despite the fact that most tourists visit Sinai without incident, it is still prudent to be aware of its security situation. A series of terrorist activities have occurred in the region, and the threat of further terrorist assaults in the future persists. It is crucial to maintain being up to date with the latest safety situation.