Mooncake is a Chinese pastry consisting of a thick and skin enveloping a sweet and dense filling along with salted egg yolks as the symbol of the full moon.

Mooncake is one of the best traditional bakery products in China. It is a special dish for the Mid-Autumn Festival, one of the four most important Chinese holidays celebrated throughout China. These mooncakes are served and gifted among friends and families celebrating together. Mooncakes usually have a thickness of about 3 to 4 cm (1 to 1.5 inches) with a diameter of around 10 cm (3.9 inches).

What’s inside the mooncake?

Inside the mooncakes, there is a thick and rich filling made of different materials including lotus seed paste and red bean. Inside the filling, you may find the salted duck eggs yolk, which is the symbol of the full moon. Then, a crust covers the filling. In some rare cases, there are steamed or fried mooncakes served.

Where To Find The Mooncakes?

This delicious pastry is mostly famous in the Northern and Southern regions of China, and they are usually eaten with tea. Nowadays, it is a custom for families and business people to giving mooncakes as a gift to their relatives or clients, which has subsequently created a demand for high-end pastries.

China has had a tremendous influence on its neighbors for a long time. As a result, the Mid-Autumn Festival has been celebrated in other countries in East Asia as well. Mooncake is a famous delicacy in Malaysia, Indonesia, Japan, Vietnam, Taiwan, Thailand, and Singapore. They are also a known delicacy in western countries. 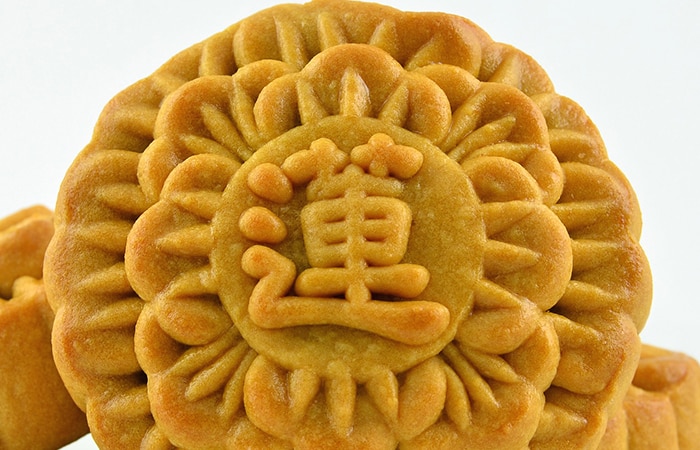 Mooncake, the delicacy of the Mid-Autumn Festival

The Mid-Autumn Festival is closely linked to Chang E legends, who was the mythical Moon Goddess of Immortality. Chinese have an ancient book about their customs and ceremonies named Liji and according to this book, the Emperor of China should offer sacrifices to the moon in autumn and the sun in spring. 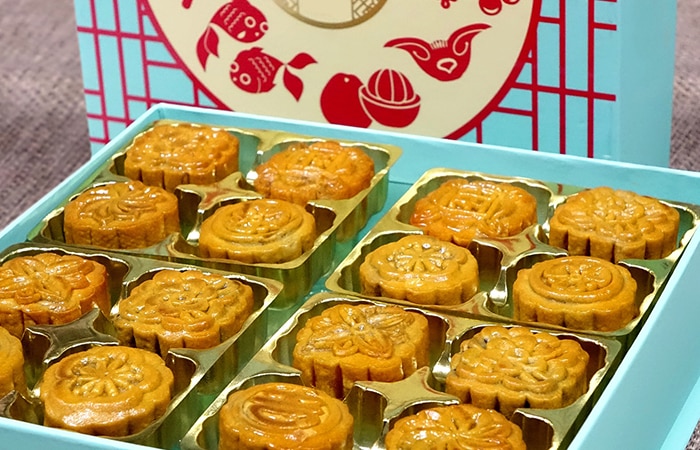 Mooncake and the Ming Revolution

There is a folk story about how mooncakes were used as means for smuggling messages, which overthrew the Mongols. At the end of the Yuan Dynasty, Ming revolutionaries used Mooncakes in their effort to defeat the Mongol occupiers of China. Generally, the tale is about a plan, probably devised by Zhu Yuanzhang and Liu Bowen, his advisor.

They spread a rumor about a fatal plague and the only way to stop it, which was eating special mooncakes. The rumor said that people who eat this mooncake would revive at once and also gain special powers. They had planned to put a secret message inside the quickly distributed mooncakes for the Han Chinese revolt on the Mid-Autumn Festival, the 15th day of the eighth lunar month. 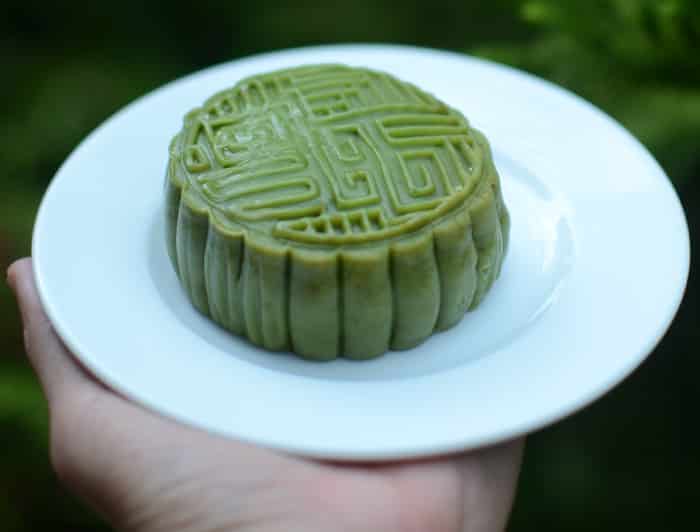 Different style of Mooncakes in China

There are numerous variants of the mooncake in each region of China. The most known ones among traditional mooncake are:

Beijing-style mooncakes are divided into 2 classifications. One has a light, foamy dough while the other has a flaky white dough. Often meticulously decorated, the Beijing-style mooncake has the most popular fillings including wisteria blossom and the mountain hawthorn flavors.

They are originally from Guangdong and Guangxi provinces. Cantonese mooncake has several types. The filling ingredients are different including the melon sMooeed paste, lotus seed paste, nuts, mushrooms, egg yolks, chicken, duck, ham, and roast pork. There are also some with four egg yolks to represent the moon’s four phases. Recently, there are some mooncakes in Hong Kong made from ice-cream, jelly, or chocolate. 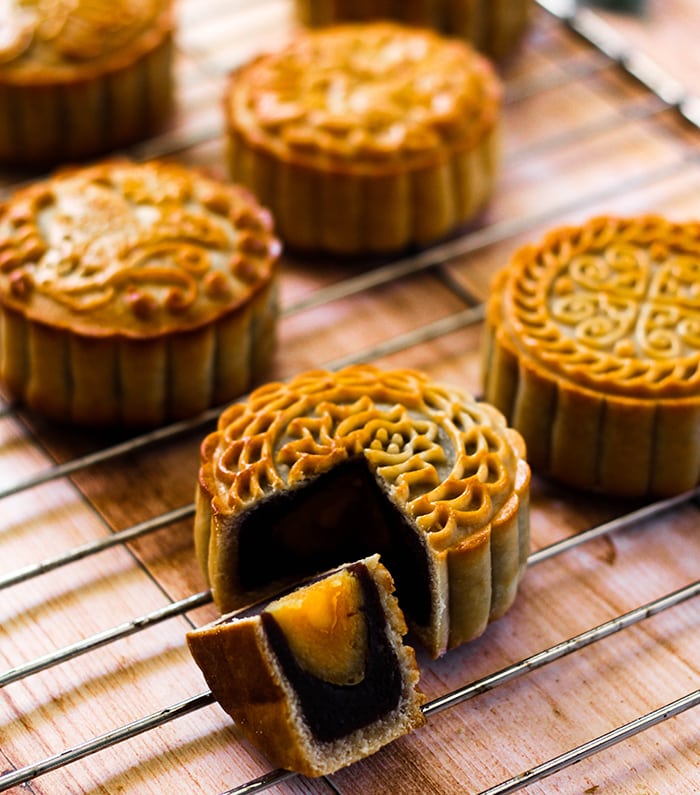 Shanghai-style mooncakes are crumbly and rich with a buttery crust. Popular fillings here are mostly sweet similar to the Cantonese ones. They include lotus seed paste, sweetened red bean paste, taro paste, egg yolks in the center of the filling.

They are typically the same as Cantonese-style mooncakes; however, local variations such as the snow skin mooncakes are becoming popular as well.

Suzhou-style mooncakes have a history of over a thousand years known for their layers of flaky dough as well as the generous allotment of lard and sugar. These mooncakes have many types. They are generally small offering both savory and sweet types. The savory ones are served hot and most often have pork mince inside. In flaky Suzhou-style mooncakes, the fillings are commonly made from with pepper and salt. 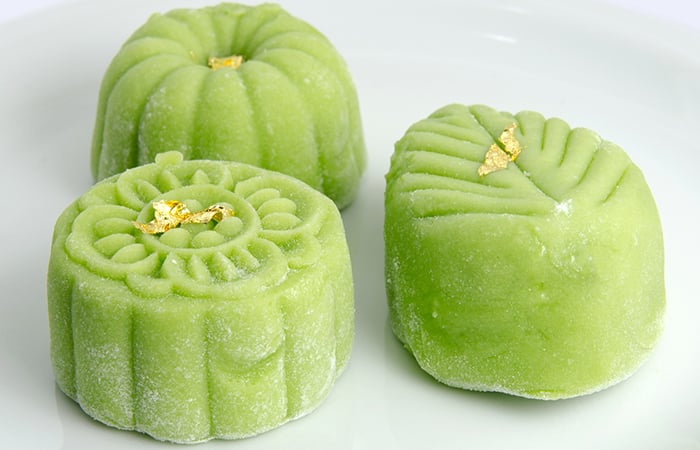 Chaoshan-style mooncakes are also a flaky crust pastry; however, they are larger than the Suzhou ones. They have the same size as the Cantonese style but a little thinner. These mooncakes have many different fillings and features. The aroma of lard after roasting is one of the important ones.

Ningbo-style mooncakes are also inspired by the Suzhou-style mooncakes. This style is very popular in Zhejiang province, and its fillings are either ham or seaweed. They are known for their salty and spicy taste. 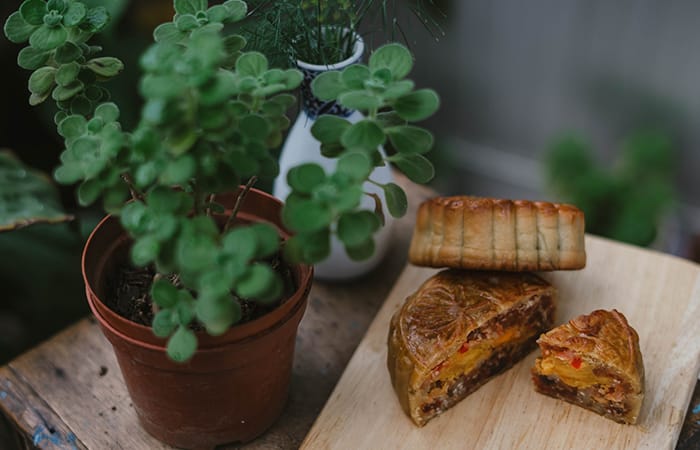 Yunnan-style mooncake’s distinctive feature is the mix of different flours and ingredients to make the dough including the wheat flour, rice flour, and buckwheat flour. Most of these mooncakes are sweet. 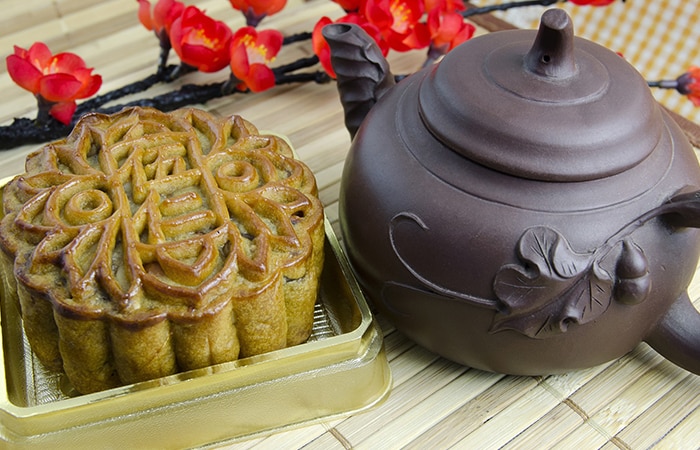 Mooncake is usually served with the tea

Interestingly, on the baked Mooncakes, there is something written in Chinese characters. These imprints usually are the characters for harmony and longevity as well as the bakery’s name and the filling materials. There are sometimes imprints of the moon, vines, flowers, or a rabbit (as the symbol of the moon) for additional decoration. Do you have any more information to add? Feel free to leave your comments and thoughts for us. Besides, you can ask your questions about this amazing pastry and our professional experts will reply as soon as possible.