Maruekhathaiyawan Palace – The Palace of Love and Hope

There are three sections in the Maruekhathaiyawan Palace that are connected by long covered walkways, also known as "The Palace of Love and Hope." Two covered corridors provide a link between the Palace and the beach, one from the King's living quarters and another from the women's section.

It was a little north of Cha-Am district on Hat Chao Samran beach where the King had a Palace built, but he was unhappy with it. He demolished the building and used the teak wood to construct a new Palace facing the sea. Because Cha-Am has a rail connection to Bangkok, Thailand and its surrounding area is conducive to health with its fresh sea air and forest, the location was convenient. (Photo by Thanate Tan via Flickr)

This Palace is entirely constructed from teak wood and raised from the ground on pillars. It has a lovely architectural style that stands out amongst its Thai counterparts.

In terms of the overall design, the King personally supervised the Palace’s construction, and it was made to be a very comfortable place with excellent ventilation and pillar niches to keep ants at bay. It is believed that Italian architect Ercole Manfredi was hired to finish the design, which is really interesting and can be seen by its Italian style. In addition to being one of King Rama VI’s summer estates, Marukhathaiyawan is also called Mrigadayavan. It was used by the Royal Family until King Rama VI’s demise in 1925.

It is the Palace of Hope and Love

King Vajiravudh lived in personal living chambers in the Phisarn Sakorn section. Bedrooms, bathrooms, dressing areas, a study room, and dining for the King areas are located here. During his rule from 1920 to 1925, King Vajiravudh, a great writer and a poet, lived in Maruekhathaiyawan Palace and wrote in the study overlooking the sea.

The living quarters of the Queen

Queen Indrasakdi Sachi lived in Samundra Biman, a section of the Palace that housed several rooms, including a living room, bedroom, wardrobe, and bathroom, along with a setting leading directly to a bathing pavilion on the beach.

At Sewakamart, the official functions and offices were performed as well as a theater. Maruekhathaiyawan Palace would be furnished with furniture from Bangkok for the Royal Family when they came for the summer.

As a result of the King’s death in 1925, the Palace was left abandoned. Nowadays, it has been restored to its original glory, and a few of the King’s belongings, like his writing desk with pencils and paper and his sofa and bed, have been left behind. Inspecting the Thai Royal Palace gives you a rare insight into life as the Thai Royal Family lived in the early 1900s. The nature trail in the mangrove forest surrounding the Palatial complex is a great place to take a walk after you have visited the Palace. 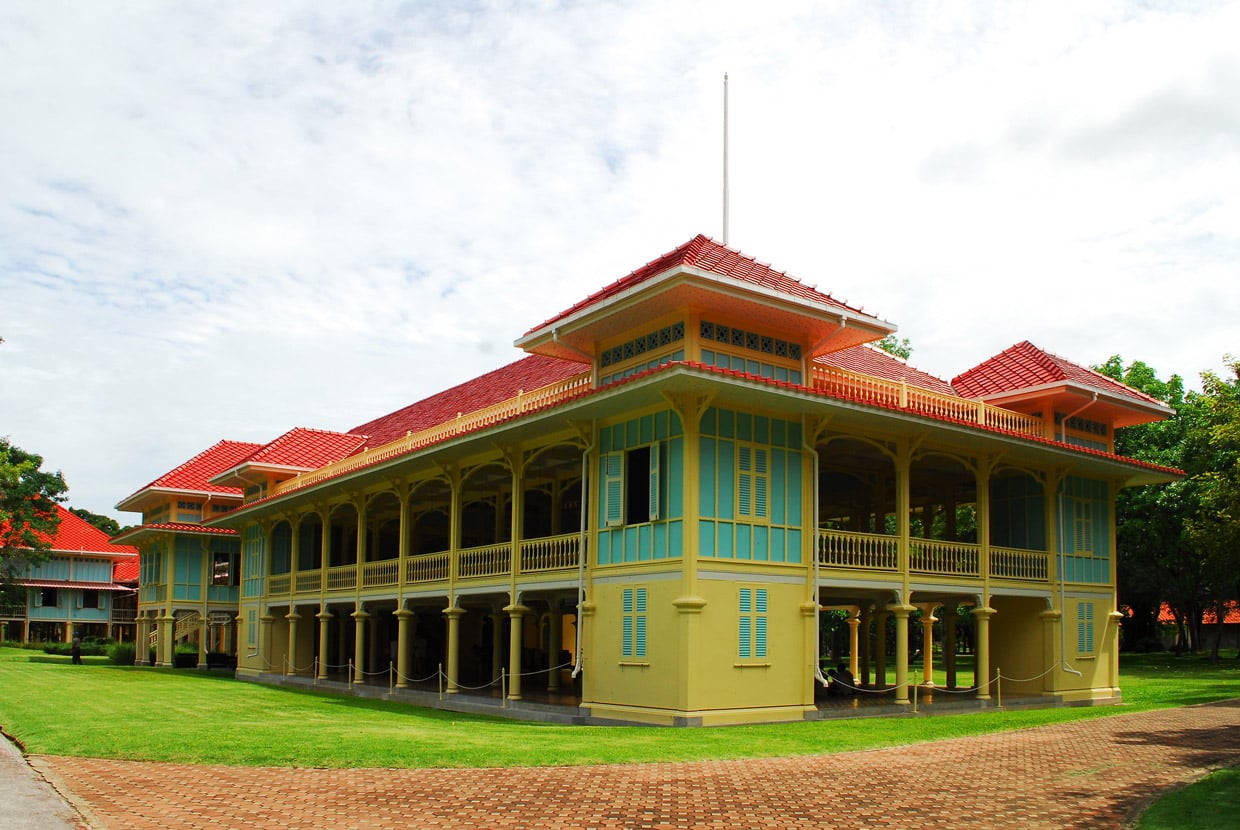 Getting to Maruekhathaiyawan Palace

Nearly halfway between Cha-Am and Hua Hin, the Maruekhathaiyawan Summer Palace is located in Phetchaburi province, about 10 km from Cha-Am and 15 km from Hua Hin inside the Rama VI army camp.

Taxis and motorbike tuk-tuks are easily and quickly accessible from either location. An orange-colored local bus, running from Cha-Am to Hua Hin, also stops there on request. You can either go by taxi near Bangkok, which takes approximately three hours, or you can take a train from Hua Lamphong station to Cha-Am, then get a taxi from there. 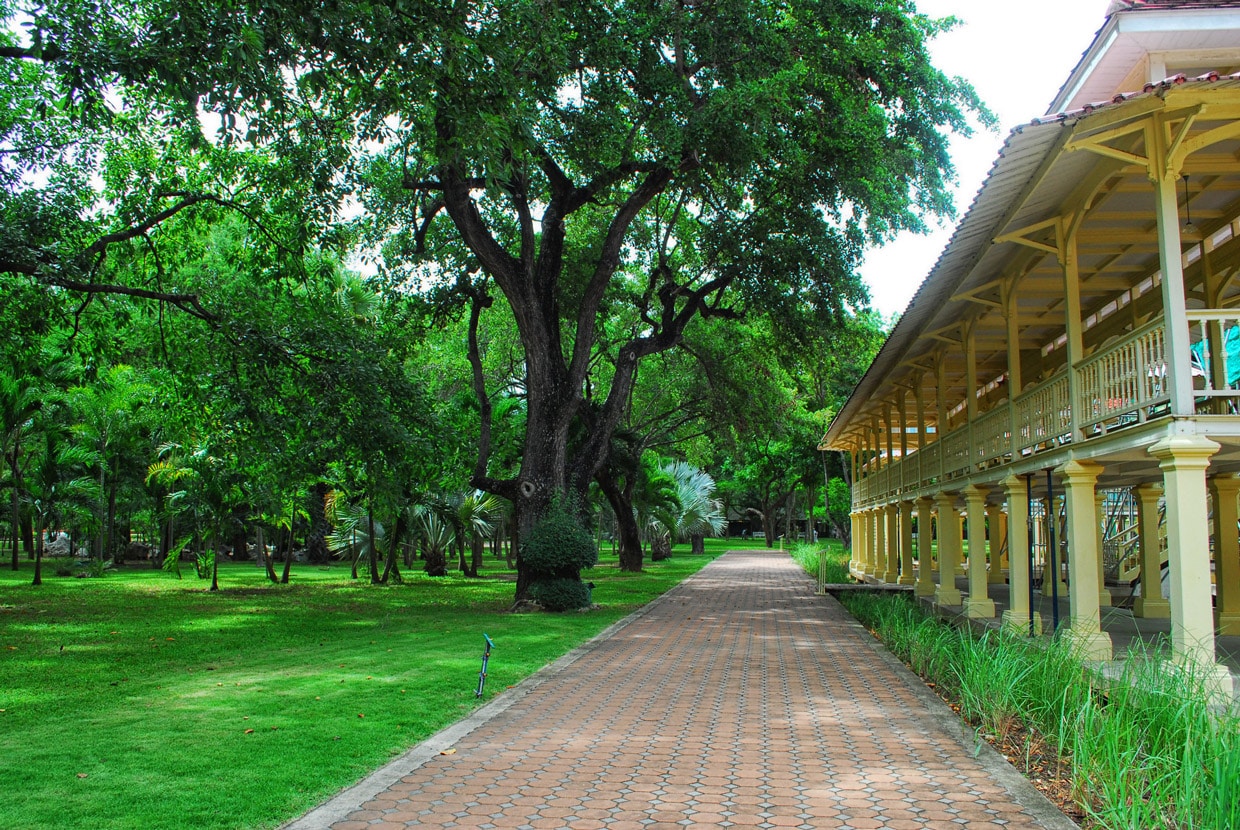 The Palace can be visited weekly except Wednesdays from 8:30 am to 4:30 pm. Tickets are on sale through the box office until 4 pm. If you are going to the upstairs of the Palace, you need to remove your shoes. If you prefer, you may place your shoes in a cloth bag provided in the Palace and carry them to the upper floor.

You are not allowed to take pictures upstairs at the Palace. You must dress appropriately, including no short pants or short skirts and no sleeveless shirts. Wearing sarongs, you can leave this type of clothing behind when leaving the Palace. You can buy Sarong clothes from the Streets nearby for around 20B to 30B. It is also possible to hire bicycles to explore the area and the mangrove nature trail surrounding it.