Six Harmonies Pagoda or Liuhe Pagoda is a beautiful structure located in a lush area in southern Hangzhou. This pagoda is situated at Yuelun Hill foot and faces the Qiantang River. It was founded and constructed by the Wuyue Kingdom in 970. Then, in 1121, it was destroyed and fully reconstructed by 1165, during the reign of the Southern Song Dynasty (1127–1279).

Liuhe Pagoda is China’s National AAAA Tourist Attraction because of its history and beautiful design. This construction is one of the most known ancient towers in Hangzhou. The Pagoda owns a grand appearance when looking at it from a distance. Also, the decoration inside the pagoda is very fancy, and if you go to the top part of the pagoda, you can enjoy a lovely panoramic view of Hangzhou and Qiantang River.

Six Harmonies Pagoda was first constructed by the Wuyue Kingdom, the ruler of Hangzhou in 970. Liuhe Pagoda’s name is related to the six Buddhist laws. It was thought this construction would calm the Qiantang River’s waves.

Surprisingly, the locals state that the tower has calmed the tidal bore. The Liuhe Pagoda also had another function. It was used as a navigational aid to help the boats and ships better navigate through the area.

The pagoda was admired by the people of Hangzhou, but it had suffered much damage during the time, which led to many repairs. During the wars in 1121, it was wholly ruined and rebuild in 1165, which is the current brick and wood building.

Added to wishlistRemoved from wishlist 0
Add to compare
From: $2,359.00

The Mythology of Six Harmonies Pagoda

The Liuhe Pagoda has many legends around its identity. One of these legends is about the Dragon King of the Qiantang River and Liuhe, who was a young boy. Qiantang River Dragon King was a brutal man who caused damages to the people’s fields extremely. He also did not care that his waves were fatal to the local people.

On the other side, there was Liuhe, a fishing boy who had suffered much by the tides of the Qiantang River made by the Dragon King. He had lost his father because of the river tides, and they had also taken away his mother to the river. Lihue was very sad, so he threw stones into the river continuously to defeat it.

This action of Liuhe, heavily shook the Crystal Palace in the river, the Dragon King’s house. This made the king surrounded, release his mother, and not cause more problems for the people. As the legend says, the Liuhe was built on the mountain to commemorate the kind boy. Today, there is a statue of the Liuhe in the courtyard looking with a frown and ready to throw a stone.

Six Harmonies Pagoda as a Lighthouse

Joseph Needham, a British historian, and sinologist has stated that the Six Harmonies Pagoda functioned as a lighthouse on the Qiantang River. Considering its gigantic size and height, it was very visible for sailors on the river who sought anchorage for the ships at night. It could have had the function of a lighthouse since its establishment, as described in Hangzhou Fu Zhi.

The pagoda has a hexagonal shape with a height of around 60 meters (about 196 feet). In the exterior part, there is a harmonious shift of dark and light, achieved by the bright upper surface and the dark underneath part of the layers.

Also, when you look at this tower, it seems that there are thirteen floors in this structure, but its interior architecture only has seven stories. On each level of the Six Harmonies Pagoda, there are four elements as the exterior walls, the interior walls, a zigzagged corridor, and a small chamber.

There is a spiral staircase that leads to the top floor. When you are going up the stairs, you will see painted and carved figures featuring characters, animals, birds, and flowers. 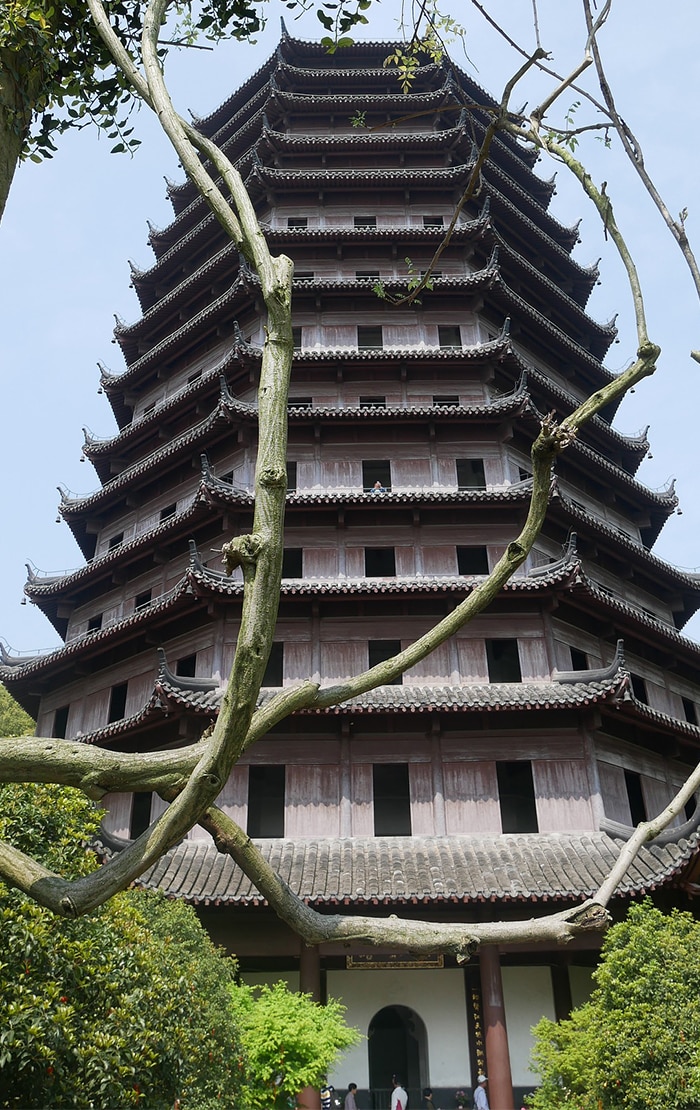 It is located at Number 16, Zhi Jiang Road, Xihu District in Hangzhou.

The visit takes around one to two hours.

Recently, a small Pagoda Park has been opened nearby, which exhibits models of Chinese pagodas from ancient times. This park nicely shows the history, culture, and different designs of Chinese pagodas. As a recommendation, visit the Six Harmonies Pagoda in September as the Qiantang River Tide exists in this month.

The above information is only for your reference and if you want more detailed information, let us know in the comment section. Also, we will be grateful if you share your ideas and thoughts about this construction with us.