"Lingyin Temple" literal translation in English is  “Temple of the Soul's Retreat”, which refers to the underlying ideology of Buddhism. It is also one of the wealthiest Buddhist temples of China, which has many pagodas inside.

Buddhism is an essential element of Chinese culture, and Hangzhou is a home to one of the most enchanting Buddhist sites in China. Lingyin Temple and Feilai Feng Grottoes are two highly praised places for Buddhism in China located on the beautiful green hills of the ancient city of Hangzhou. Here, TripWays is going to have a closer look at these two places. As a warning, before visiting China, make sure to get informed about tourist traps of this country.

Lingyin Temple is a part of the Chan sect in the Chinese School of Mahayana Buddhism. It is the largest among other temples in the Wulin Mountains. Also, it contains many grottos and the most famous one is the Feilai Feng (the peak that flew hither).

The foundation of this places dates back to 328 AD during the Eastern Jin Dynasty (265–420). An Indian monk known by his Chinese name “Huili” founded this place. It shows the fact that Buddhism in China was originated from India. Since the establishment of the temple, it has been a known monastery in the Jiangnan region.

During the Wuyue Kingdom (907–978), this place experienced a great blossoming era. The temple then owned nine multi-story buildings, 18 pavilions, and 72 halls. The temple also had 1,300 dormitory rooms, which were the home to over 3,000 monks. During this time, many of the magnificent Buddhist carvings of Feilai Feng grottos and other nearby mountains were created.

The monastery of Lingyin Temple was considered as one of the ten most important Chan sect temples in the Jiangnan region during the later periods of the Southern Song Dynasty. Although the temple had the most importance, the Marauders attacked it. The temple has been reconstructed several times since the attack deconstruction. The current structures of the temple are mostly restored during the tale Qing Dynasty (1644-1912).

After the communist party took over China, Mao Zedong ordered the beginning of the Cultural Revolution, which led to some damage to the temple from the Red Guards. Zhou Enlai, who was the Premier of the People’s Republic of China at the time, protected the temple from massive destruction.

The temple today is a prosperous destination for both tourists and pilgrims. It is considered among the wealthiest monasteries of China. Between the regular pilgrims of this place, former paramount leader Deng Xiaoping is a worthy mention.

The Lingyin Temple is a mixture of the Song Dynasty and Qing Dynasty architecture as well as a colossal structure site. This monument has five main halls which are beautifully painted and decorated.

The Hall of Four Heavenly Kings is the first hall of the Lingyin Temple. This hall is an enormous one and has two significant statues inside. One of the sculptures is the giant Laughing Buddha, and the other one is the Skanda Buddha (known as Weituo in China), which is 800 years old. Also, it is considered as the most important statue of the temple.

Mahavira Hall is the main hall and the statue of Shakyamuni Buddha, one of the most famous statues of the original Buddha, can be found here. This statue is the largest wooden Buddhist statue in China.

The other halls of the Lingyin Temple are all equally beautiful and display precious collections of sculptures and artifacts. The presence of these ancient relics alongside the smell of incense and the surrounding trees would bring you a peaceful and spiritual state. 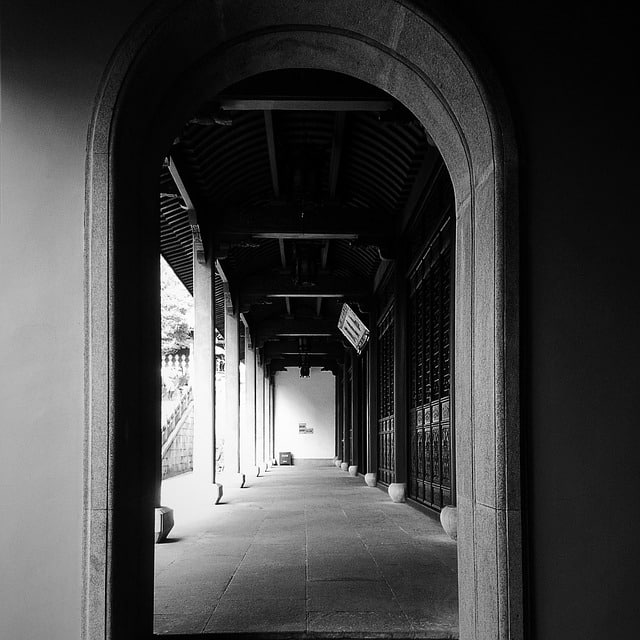 You can visit the unique attraction of Feilai Feng Grottoes before or after visiting the Lingyin Temple. Don’t miss it! It needs just a short walk from the temple. Feilai Feng is the greatest one between the Five Zen Buddhist Mountains.

According to legends, it was initially transported from India; therefore, it was named Feilai Feng. “Feilai Feng” literal translation in English is “the Peak that Flew Hither” and it is also referred to as Flying Peak. The grottoes here are filled with numerous Buddhist rock carvings that line with the river banks and hillsides.

The Carvings of Feilai Feng Grottoes

There were around 470 original carvings that still 335 of them are preserved well. Most of these carvings were done in the 10th century and are more than 1,000 years old.

Walking through these atmospheric caves and their exceptionally well-preserved carvings will make you feel as though you’ve stepped back in time. If you want to see the best sculptures of these places such as the famous laughing Maitreya Buddha and eighteen Arhats, you will need to continue your way on the east side of the stream.

These carvings are astonishing and their appealing looks will amaze you. If you would like to reach the summit of Feilai Peak, you will need around 10 minutes.

Walking on this mountain and the verdant forest will bring you a calm and fresh breath. Also, you can imagine how the monks have lived here and meditated for nearly 1,300 years! 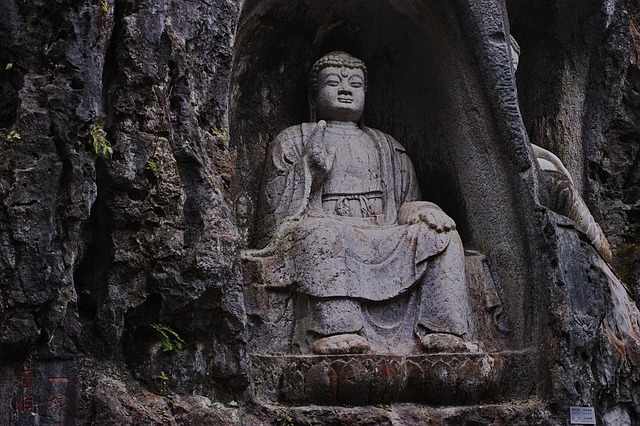 How to get Lingyin Temple and Feilai Feng Grottoes?

The temple is located in the west neighborhood of West Lake (about 3.5 kilometers) and it is hard to get there by foot or bike. Using a bus or taxi is recommended. Various bus lines can help you to reach the temple from different points of the West Lake. If you use a car or a taxi, you will have about 20-40 minutes from West Lake depending on your starting point.

Visiting this cultural site takes about 2 hours from you.

As you may know, China is the country of temples and you can find many amazing and historic temples there. Do you have any more information about this historical monument? Feel free to leave your comments for us. Also, if you are interested in visiting other temples in China, don’t forget the Beijing Fayuan Temple!

Explore the Hidden Kingdom of Bhutan