Located in the Lhasa of Tibet, Potala Palace is the highest ancient palace in the world symbolizing the Tibetan Buddhism Culture with 1300 years of history.
November 27, 2022

Lhasa Potala Palace is the most famous religious and administrative fortress of Tibet. Located on the top of the red hill called Marpori Hill, the palace is in the center of the Lhasa Valley. The Potala Palace is a veritable gem of Tibetan Buddhism presenting many facets to pinpoint Tibet’s identity both politically and religiously. (Video Credit: Milosh Kitchovitch)

History of the Potala Palace

According to history, the construction of the palace dates back to the Songtsen Gampo kingdom era in Tibet(609-650). The building was originally built to symbolize the marriage of King Gampo to the Chinese princess Wencheng. It was initially a simple Red Fortress serving especially as a royal palace.

In the ninth century, a fire ravaged the palace violently. Lobsang Gyatso, the 5th Dalai Lama of Tibet (1617-1682) rebuilt and enlarged the palace. As an imposing Buddhist temple, the Potala Palace became a residence of the Dalai Lamas and at the same time, the seat of the Tibetan government.

During Emperor Shun Zhi’s visit to the palace, the fifth Dalai Lama (the founding father of the lamasery) was awarded as Tibet’s highest spiritual leader.

The Death Of the Fifth Dalai Lama

The fifth Dalai Lama died in 1682 and the reconstruction of the palace was not over yet. Before his death, Lobsang Gyatso entrusted the works to Sangye Gyatso. The latter assured the government of the country and kept the death of Lobsang secret until the end of the reconstruction. At first, the Dalai Lamas only lived in the Potala Palace during the winter; therefore, its name is Dalai Lamas winter palace.

After the takeover of the Chinese state in Tibet in 1950, the lamasery became the property of the Chinese government in 1961. They took advantage of the flight of the 14th Dalai Lama in 1959 to Dharamsala, India for seizing the lamasery. Since then, it has been inscribed on the Chinese Heritage List and in 1961 became a museum of the People’s Republic of China. Besides, the Potala Palace was inscribed on UNESCO’s list of world cultural heritage in 1994 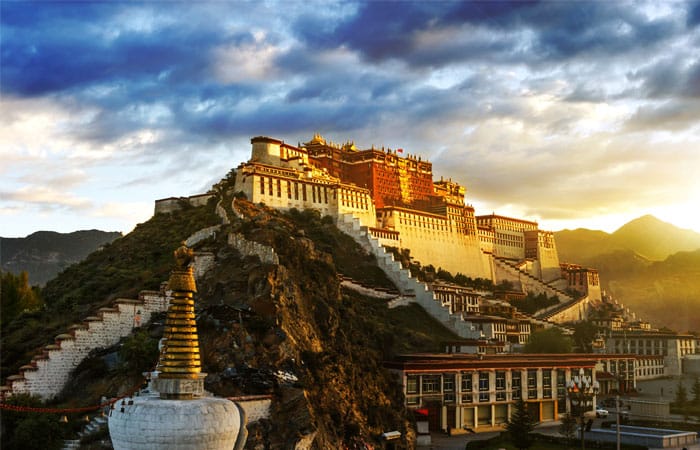 The Potala Palace is a gigantic and magnificent fortress that has become the symbol of Tibet. With 3 floors and more than 1,000 rooms shared between the White Palace, the Red Palace, and the adjoining buildings, the palace displays bold architecture that is in perfect harmony with the natural scenery of Marpori hill. The palace presents the apex of human work with its typically Tibetan architecture. Long regarded as a sacred place, the Potala Palace has often been nicknamed the “palace of gods in Tibet”.

With more than 400 meters in length, the White Palace stands on 13 floors each one containing nearly 1000 pieces. You will discover old courtrooms, private apartments, and the evolution of the Tibetan government.

The white palace has served as the principal residence for the Dalai Lamas and the seat of the Tibetan government for many years. Above all, it’s the symbol of the unification of Tibetan political, administrative, and spiritual power.

Constructed in 1694 by Sangye Gyatso, the Red Palace is at the center of the complex and rises a little higher than the other buildings nearby. It consists of ceremonial halls, several libraries, meditation halls, and funerary halls that hold the burials of the 13 Dalai Lamas.

The Red Palace has become famous for the eight golden stupas of the Buddhas installed in the center and for the famous funerary hall of the founding father of the lamasery. The remains of the fifth Dalai Lama reside in the famous Chorten (Stupa). This is a 14-meter-high coffin decorated with gold leaf and adorned with a multitude of pearls, turquoise, and diamonds.

The Red Palace is a temple reserved only for the worship of Buddhism. Through the meditation halls and libraries, the monks quietly perform their learning. The Palace is the ideal place to appreciate the Buddhist culture and religion. You will quickly feel the spiritual atmosphere that emerges in every place. 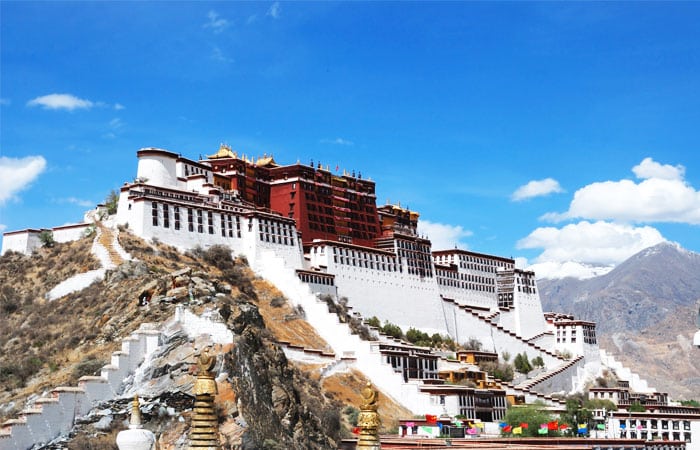 Other Adjoining Buildings of Potala Palace

Potala Palace has some other annexes including the School of Buddhist Logic, the seminary, the gardens, courtyards, the printing House and even a jail.

Through the countless rooms and galleries of the Potala Palace, the fortress contains nearly 20,000 unique artistic works. A veritable library of Tibetan Buddhist culture, the palace is a reflection of the richness of Buddhism. It contains statues of Buddha Sakyakumi and the fifth Dalai Lama as well as collections of porcelain, jade, gold, and silver.

The most important works are sutras, Tangkas, historical relics linked to the country’s distant past, murals covering nearly 2,500 square meters, painted scrolls, sculptures, and tapestries. These works trace the history of the palace and the importance of Buddhism in Tibet. 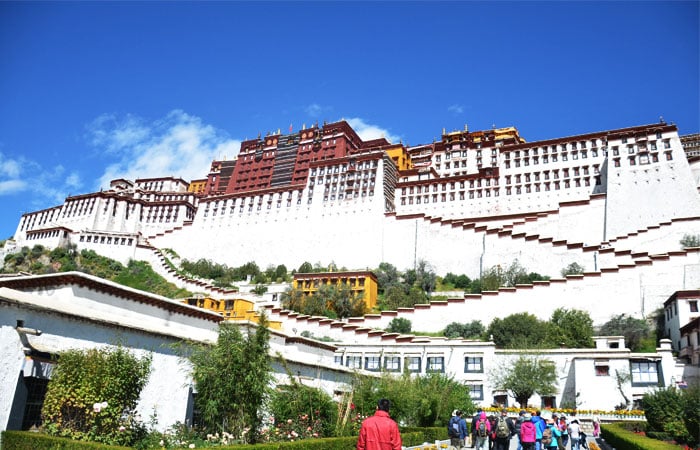 At the time of visiting the palace, you should not wear clothes that are not normal in Tibetan Buddhism culture. Try not to wear revealing clothes as well as sunglasses and masks. It’s recommended to choose modest clothes. Besides, don’t forget to bring warm clothes as it’s cold inside the palace.

Is Photography Allowed in The Palace?

During the high season (May 1 to October 31), it is recommended to book the tickets through travel agencies. Otherwise, you are required to apply for free reservation tickets with your valid identity documents, like ID cards and passports, a day before visiting the palace. You can use a valid ID document only once a week. However, a visitor can have as many as four reservation tickets (one for himself and three for his companions) at a time. The reservation ticket window is open from 09:00 until that the tickets are sold out.

Do you have more information to add? don’t forget to share your experience and thoughts with us. Besides, you can leave your questions about this attraction and our professional guides will reply as soon as possible.