Located in the north of Sichuan Province, Jiuzhaigou National Park is an extraordinary scenic spot, which is classified as UNESCO World Heritage Site in 1992.

Jiuzhaigou National Park and Nature Reserve are located in the Jiuzhaigou Xian County in the north of Sichuan Province, the southwestern region of China. Jiuzhaigou park is particularly famous for the beauty of its waterfalls and lakes. According to Tibetan tradition, God offered a mirror to the Goddess that he loved. The Goddess dropped the mirror, broke into the 118 pieces, forming so many lakes. (Video Credit: Yu Yu)

The History of Jiuzhaigou National Park

Jiuzhaigou, literally translated as “Valley of Nine Villages”, takes its name from the nine Tibetan villages located along its length. Tibetan and Qiang people inhabited this remote area for centuries and before 1975, few people knew this inaccessible area. Jiuzhaigou was the site of extensive logging until 1979 when the Chinese government banned such activity and classified the area as a national park in 1982. The site was opened to tourists in 1984 and the development of facilities and regulations was completed in 1987.

It is a preserved natural park in the American style, a kind of Yellowstone National Park of U.S in China.  Jiuzhaigou was a backdrop for Kung Fu movies, such as ‘Crouching Tiger, Hidden Dragon’, in 2000. The valley was inscribed in the UNESCO World Heritage List in 1992 and became a biosphere reserve in 1997. The reserve protects 720 km² of what the United Nations considers “the most biodiverse temperate forest” in the world. Since its opening, the tourist activity of this national park grows every year.

The Geological Feature of The Park

The limestone of an ancient ocean floor is the main geological feature in this region in Tibetan Plateau. The dissolution of the limestone gives the emerald or turquoise shade to the waters or reinforces the shimmer of a blue sky. Avalanches interrupted the flow of rivers and formed the lakes.

The Jiuzhaigou ecosystem is among the ecosystems of temperate hardwood forests as well as woodlands with a mixed system of mountains and highlands. Virgin mixed forests cover nearly 330 km2 of the central zone. These forests have attractive yellow, orange, and red colors in the fall, making this season so popular for visitors and tourists.

There are many plant species such as the endemic varieties of rhododendrons and bamboos. The valley is home to about 140 bird species including Falco Naumanni, Certhia familiaris Khamensis, and the Chinese monal. 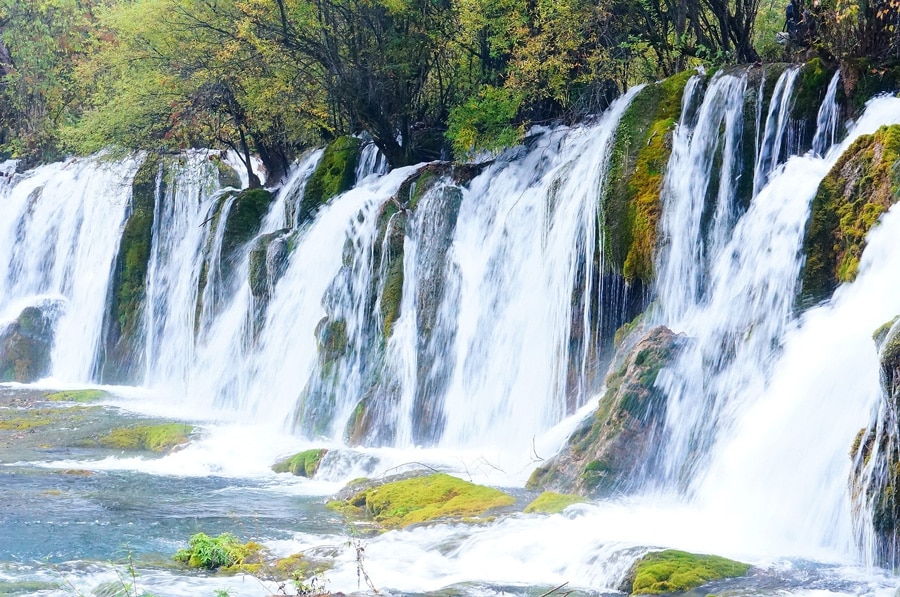 The first three form a “Y” shape. Besides, The most famous tourist sites in the whole national park are:

Since supply materials are all brought in from outside, the price of feeds in the valley is very high. Tibetan villages keep traditional customs and habits. People can also have a meal with Tibetans. Yak meat, Yanyu Ci Ba, Barley wine, and Ya Tea are among the Chinese food of Jiuzhaigou that you should not miss tasting.

In the peak season, over 280 buses make the shuttle to transport their approximately 10,000 daily visitors. The entire valley has been converted into a controlled access tourist site where private vehicles, in particular, are not allowed. Visitors can use a shuttle bus to go from one place to another and take footpaths arranged in respect of the sites. These shuttles run on natural gas to limit their impact on the environment. 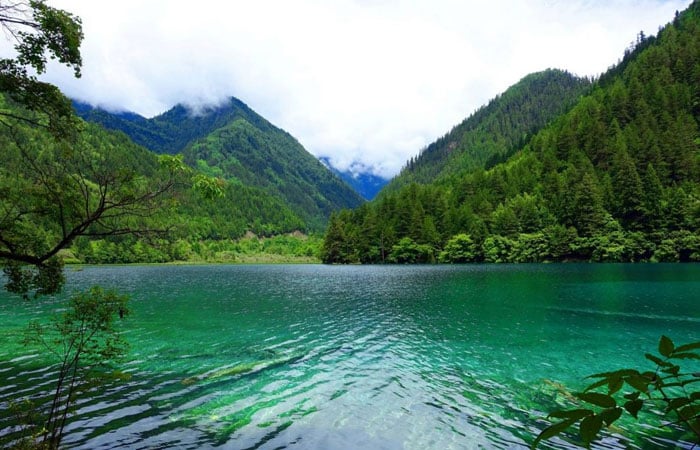 Climate and the Best Time to Visit Jiuzhaigou National Forest

Jiuzhaigou National Park is somehow cold in spring. There is a large difference in temperature; the average temperature is between 9ᵒC and 18ᵒC. You can still see the snow on the earth, which has not completely melted since winter. It is better to wear a thick coat in spring.

The weather is nice, in autumn and the temperature is between 7ᵒC and 18ᵒC, but there is a large temperature difference between day and night; especially at the end of October.

The temperature is between 0ᵒC and 3ᵒC in summer and the difference in temperature between day and night is not great, but it is very cold and dry. Thermal and moisturizing products are essential in this season.

You can take the trip to Jiuzhaigou all year long, but the best time is from September to October, where the leaves are colorful and seductive.

People in Nearby Areas

Tibetans in the valley are different from those in neighboring areas in terms of their traditions, costumes, and language. It seems that they are the descendants of a tribe, living at the foot of Amne Machin Mountain. They followed Songtsen Gampo, the 33rd Tibetan king and founder of the Tibetan Empire, in his campaign against China in Songzhou around the year 635 AD, and then they settled in the valley.

Seven of the nine Tibetan villages are still inhabited today. The main settlements that are easily accessible to tourists are Heye, Shuzheng, and Zechawa, along the main tourist trails, where the travelers can find and buy various handicrafts, souvenirs, and snacks.  Behind the village of Heye, there are the villages of Jian Pan, Panya, and Yana. Those of Guodu and Hejiao are no longer inhabited. The villages of Panxing, Penbu, and Yhongzhu are located along the road through Jiuzhaigou / Zhangza City outside the valley.

Due to the protected nature of the park, there is no permission for agriculture in the valley and its inhabitants rely on government and local tourism subsidies to earn a living.

Where to stay in Jiuzhaigou National Park?

The picturesque sites of Jiuzhaigou are varied and numerous. According to rules, to protect the environment, it is forbidden to stay or camping in the valley and you need to stay in the town of Jiuzhaigou entrance. 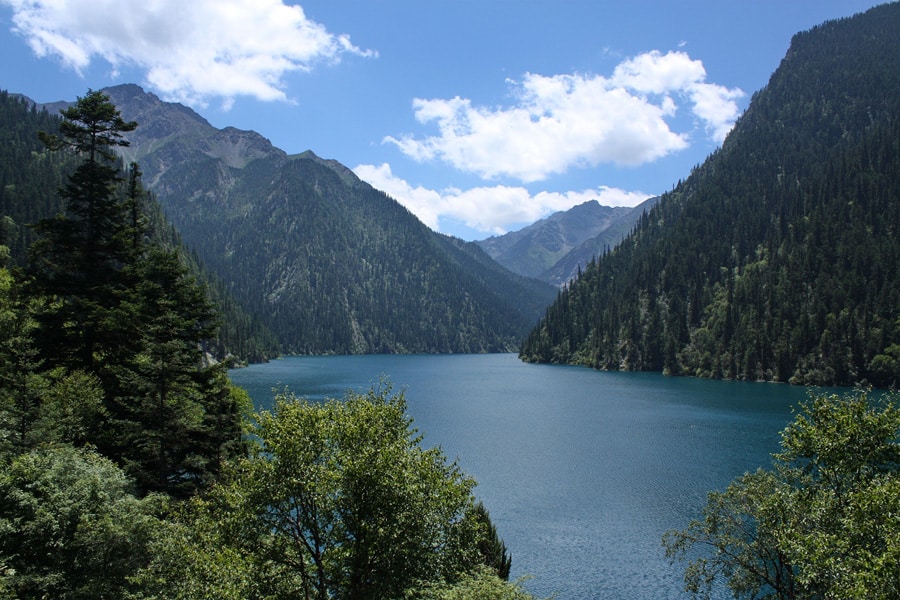 How to get to Jiuzhaigou Valley Park

For now, there is only the bus and the plane. In general, you can fly to Chengdu, Chongqing and Xi’an airport to go to Jiuzhaigou. Jiuzhaigou is 460 km from the city of Chengdu, you have to put a full day bus. However, after the earthquake of Wenchuan, we recommend not to take the bus because of the difficulty.

This is a hiking tour and bringing sufficient drink and some snacks for yourself is recommended; however, bringing much personal stuff such as luggage is not suggested as you will have a long walking. Also, make sure that you are following your guide to avoid accidents. Put this fantastic national park in your itinerary in Sichuan and leave your comments and thoughts in the for us.