Jinsha Site Museum of Chengdu displays a huge collection of archaeological discoveries from the Shu Kingdom era (3000 years ago) such as ivory, gold & jade.

Jinsha Site Museum is built on the Jinsha Site where one of the most important archaeological discoveries of China took place. Everything goes back to 2001 when archaeologists found fantastic discoveries related to the ancient Shu Kingdom that lived around 3000 years ago. This museum is located in Chengdu, and there are many unearthed gold, jade, bronze, stone, and ivory relics in its five exhibit halls. (Photo by © Gary Todd via Flickr)

The discoveries of the Jinsha Site Museum made it clear that Chengdu has been populated since around 5,000 years ago. It also indicates that Chengdu was a culture, economy, and politics center on the rise after the Sanxingdui civilization decline.

Archaeologists unearthed many valuable objects, mostly from 12th to 7th century BC. One of these ancient relics is the Golden Sun Bird, a thin circle-shaped piece made of nearly pure gold. Later, the city of Chengdu selected the design of Golden Sun Bird as its new logo.

Besides the Golden Sun Bird, there are also many other relics made from gold, jade, ivory, and stone. Almost all of these objects are produced by highly skilled craftsmen, which demonstrate that this area has been the capital of the ancient Shu kingdom in its flourishing period.

Jinsha Site Museum covers a vast area of around 300,000 square meters and it is located between the 2nd and 3rd ring roads near Chengdu city downtown.

This site museum is primarily divided into Exhibition Hall, Relics Hall, Sun and Immortal Bird Sculpture, Ebony Forest, and Jade Road. By visiting each part of the museum, you can be sure that you will be amazed by the amount of work there.

Added to wishlistRemoved from wishlist 0
Add to compare
From: $1,499.00

If you enter the Jinsha Site Museum from its eastern entrance, you can reach the semicircle shaped Relics Halls. From the moment you are heading toward this part of the museum, you need to be prepared to see something great, which is the large scale hall where the original excavation took place.

The roads here are paved with wood so you can walk easier in this ancient environment. The atmosphere of this hall can genuinely demonstrate the old community that once lived in the area, and today, we have tens of thousands of their cultural relics. This place also is the largest palace of the pre-Qin era in southwest China. Besides, there are signs of different tombs and more than 70 house foundations found here.

The Exhibition hall consists of five small halls that are reasonably arranged within the tall building. The route created between the halls is logical, which starts from Exhibition Hall No. 1 to No. 5. You can visit them all accordingly.

After the Relics Hall, you can enter the second main spot in Jinsha Site Museum. You need to go to the second floor and find the Exhibition Hall No.1. This place is fascinating, mainly because of the visuals set there to understand daily life during the ancient Shu Kingdom better. There are also sound effects such as birds singing and dogs barking here, to better convey the essence of the scene.

When you finished the first Exhibition Hall, it is time to visit the Exhibition No. 2. In this part of the Jinsha Site Museum, the different aspects of people living 3,000 years ago are shown such as their residences, potteries, tools, jade wares, and tombs.

To reach Exhibition Hall No. 3, you need to go down to the east of the first floor. Here, there is a series of elephant tusks that are among the most important relics of the Jinsha Site Museum. This hall has a rather dark light atmosphere, in which you can find other relics of jade, bronze, gold, stone, and oracle bone.

This hall is located on the west side of the first floor. This part of the Jinsha holds the essence and soul of the museum, The Golden Sun Bird. It’s a gold ornament with a 0.02 cm thickness and 12.5 cm diameter. The Golden Sun Bird is actual proof for the advancements of the ancient community living here. The inner diameter of this relic is 5.23, and it has four immortal birds flying around the sun with 12 dentate rays in the middle. It has been said that the symbols used on this object can be defined as respect to the sun, birds, and their pursuit of a bright future and harmonious life.

Other than the Golden Sun Bird, there are also over 30 exquisite unearthed objects such as the stone tiger, the bronze human-shaped ware, gold mask, and ten sectioned jade Cong. 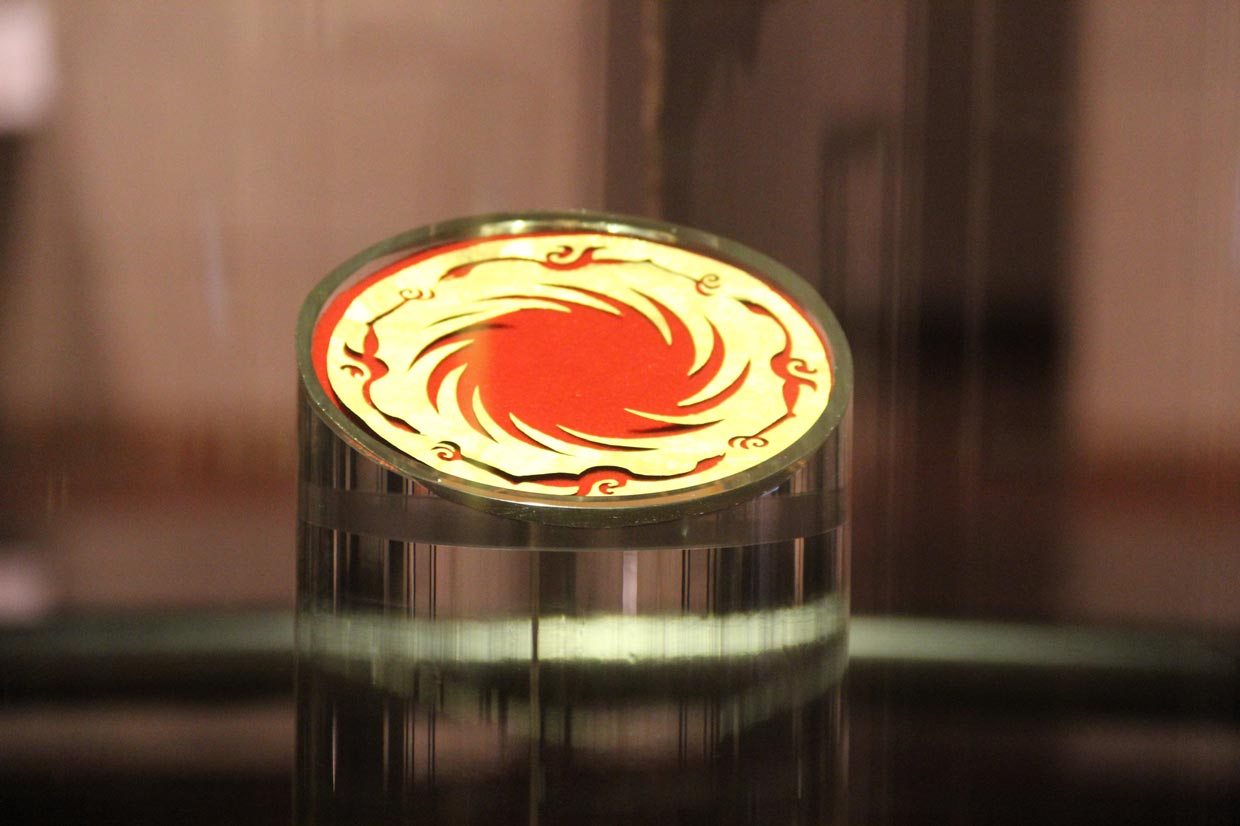 Continuing to the basement of the first floor, you will reach this hall in the west. Here you can see and enjoy the culture of Sanxingdui and the ancient Shu Kingdom. Finally, you will walk out of this part, with a better understanding of the Shu Kingdom.

This cinema is located in the first-floor basement. Here you can pay 20 Yuan to watch the 4D movie of “Dreaming Back to Jinsha” that will take you back to 3000 years ago. It is a pleasant experience to better see and feel what you have already seen in the museum.

There is a large scale replica of the Golden Sun Bird here. It’s also the logo of Chengdu and the Symbol of Chinese Cultural Heritage. This sculpture is located between the Exhibition Hall and the South Entrance of the museum.

There are the precious old trees that were once buried beneath the ancient riverbed. They were later carbonized after thousands of years. In the southeastern part of the Jinsha Site Museum, you can see more than 60 precious ebonies.

Located close to the South Entrance of Jinsha Site Museum, the Jade Road represents an exciting view. It is paved with the discovered jades and small pebbles from the area. Walking on this road would make you feel the enormous endeavors of the ancient Shu people to carve and extract jades.

The museum has 4 important features, which are unique among its kind in the same period.

The museum displays the most amazing ancient ivory collections such as ivory segments, ivories in the shape of the strip, cut ivories, etc. Also, a few numbers of elephant skulls can be found here.

In this site, over 200 pieces of gold articles had been found such as gold films, gold belts, gold masks, gold foils, Gold Foil of the Sun God Bird, fish-shaped ornaments, etc.

In Jinsha Site, over 2,000 pieces of jade in various types such as jades with the shape of the sword, bracelet, ring, and many others are preserved.

Amazing Stone Statues Collections are another important feature of this museum. Stone Snakes and Stone Figures are the most popular status here.

If you like visiting the Jinsha Site Museum and you can’t have a trip to Chengdu, don’t worry! Google Arts & Culture has presented the Jinsha Site Virtual Tour, which can give you a very close feeling of a real tour. Do you have any more information about this museum to share? make sure to leave your comments and even questions. Our professional experts will reply to your question as soon as possible.