Jingjiang Princes’ City, aka the Jingjiang Princes’ Palace or Wangcheng, is a historical site located in the inner section of Guild. This place is a complex with many attractions inside and today it has two functions; one as a beloved tourist attraction and as the Guangxi Normal University Wangcheng Campus.

When Emperor Zhu Yuanzhang installed Zhu Shouqian as the Prince of Jingjiang, the palace was set at Jingjiang for him. Building this palace took two decades, and today it is nearly 630 years old, which is older than the Beijing Forbidden City. The palace has functioned as the place where princes and their families lived in the inner part of the city.

From the building of the palace until the end of the Ming Dynasty, which is 257 years, the Jingjiang Princes’ City has been home to 14 different kings from 12 generations. Sun Yat-sen, first president of the Republic of China, has also stayed here in 1921, while he was on his Northern Expedition. In 1925, this place was established as Yat-sen Park, which is now a schoolyard of Guangxi Normal University.

Since its establishment of more than 600 years ago, Jingjiang Princes’ Palace has burned down multiple times, but it still remains as one of the best-preserved prince cities in China. Surprisingly, the marble steps and the carved balustrades still are the original ones. In 1993, the Chinese Government changed the site status as under national protection.

Guangxi Normal University has occupied the site today but still, it is a tourist attraction and open to the public. Jingjiang Princes’ City is an attraction, which perfectly combines the traditional architecture, natural environment, history, and local culture of Guilin. 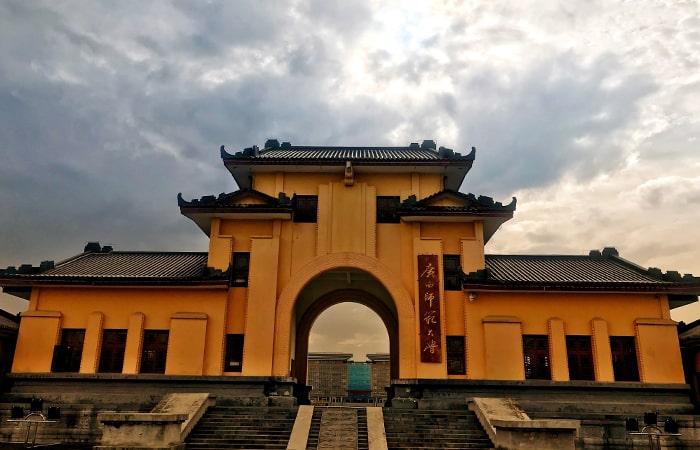 The Jingjiang Princes’ City is grandly walled and has four halls, four pavilions, and around forty other buildings surrounding the main buildings. The entire complex covers an area of 19.78 hectares (around 49 acres).

If you check the layout of the palace from the west to the east, it would be Ancestral Temple and Imperial Divine Temple. From south to the north, the layout would be Chengyun Gate, Chengyun Palace, and Imperial Burial Place in order. The other structures of the area are located around the axis of the main building.

You can enter the Jingjiang Princes’ City through four different gates in four directions, which are Guangzhi (Hougong Gate), Duanli (Zhengyang Gate), Unyi (Xihua Gate), and Tiren (Donghua Gate). The layout of this place is based on the Ming Dynasty rules, as all are building are arranged based on the axis of Solitary Beauty Peak.

There are many attractions worth a visit inside this magnificent area, which the highlights would be the following:

The best time for visiting the Jingjiang Princes’ City is from April to November as the scenery would be beautiful at this time as well and you can both nature and history at the same time. Do you have more information to add? Feel free to share your ideas and thoughts. Also, if you need more detailed information, let s know in the comment section and our professional guides will reply as soon as possible.