Jerash – The Most Beautiful Roman Site in Jordan

Jerash was founded around c. 175-164 BCE under the rule of Antiochus IV Epiphanes of the Seleucid Empire. Being blessed with resources and standing in different trade routes, Jerash grew rapidly, and many structures were built there. It later became a member of the Federation of Greek cities named the Decapolis, meaning "ten cities." Byzantine and Muslim rulers reigned over Jerash during ages and built their own specific kind of structures during the time. The city is still alive and expanding. You can visit modern parts of the city on the east side of the ruins. Appreciatively, the ruins were not encroached by new buildings.

If you travel 30 miles (48 km) north of the capital Amman in Jordan or 25 miles (40 km) south of Irbid, you arrive at the vast and ancient city of Jerash, where an old soul of the wealthy and cosmopolitan city of Jerash repose waiting to whisper senescent tales in your ears. While it was settled long ago in the Neolithic period, Jerash was founded as a Hellenistic city in the 2nd century BCE. Holding some of the largest and the most well-preserved Roman and Byzantine ruins, Jerash can offer you a mythic archaeological adventure.

There you can find signs illustrating the history of each set of ruins. You should have a map to direct yourself to the Visitor Centre, at the South Gate of the Jerash archaeological park. The ruins are widespread compared to other similar sites, but it’s not impossible to regard everything in a couple of hours. It is improbable for visitors to miss anything important. We recommend you go first thing in the morning so that you can evade most of the tour groups coming from Amman.

Jerash ruins contain different parts to visit. Try to pin other places on the map so you can plan your visit properly. Here is a list of the places this site includes:

Jerash Archaeological Museum presents an aggregation of artifacts found through excavating, including coins, statuary, and sarcophagi. 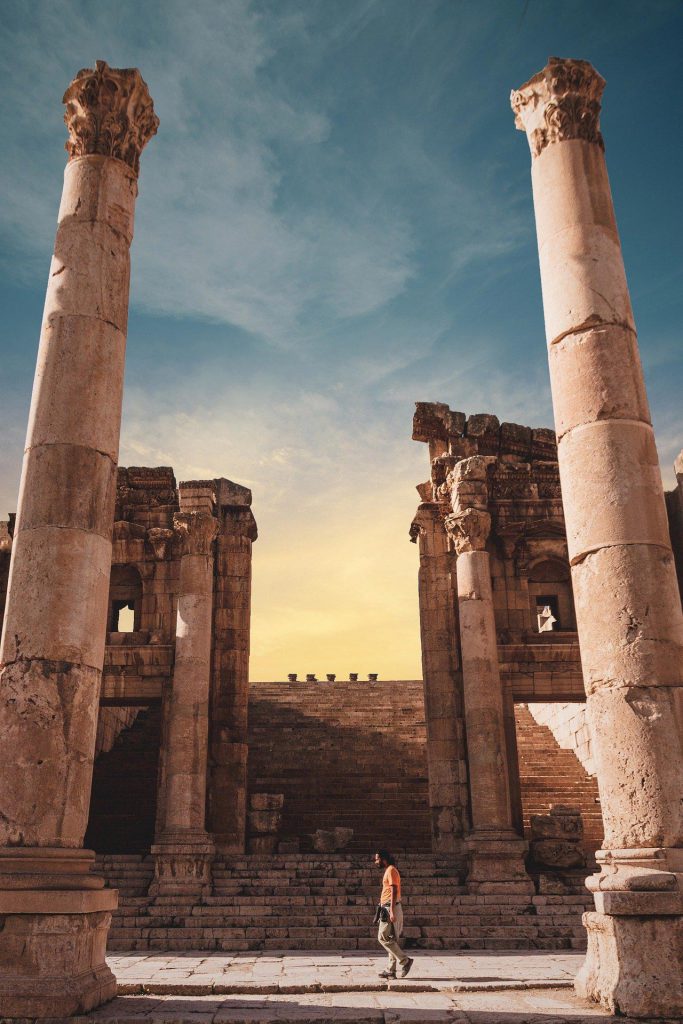 Hippodrome is partially set up in a new Roman-era stadium. It was the smallest one in its kind of structure in the Roman Empire.

Oval Plaza (Forum) is an atypical wide, unsymmetrical plaza at the start of the Cardo.

The Temple of Zeus, rather than being a spectacle itself, presents a great viewpoint to many parts of the site.

South Theater is an amphitheater with a capacity of 3000 people. It is still occasionally used today to execute concerts and musical events, but you can enjoy some daily features, including bagpipers in traditional Jordanian military dress. 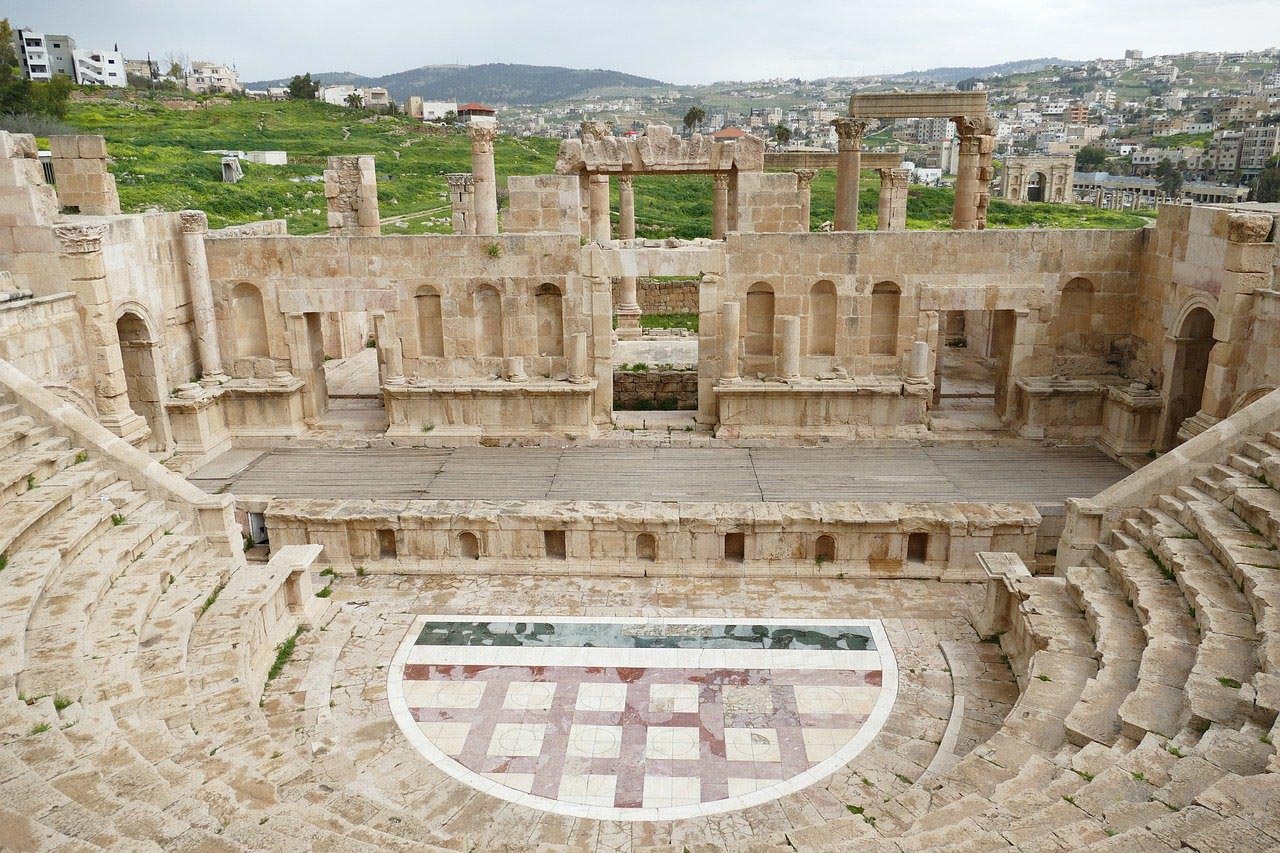 The Cardo (Maximus) is a 660-yard colonnaded street that connects the whole length of the city. Long ago, it was linked with the city’s main buildings, shops, and residences. A complicated drainage system lies below the paving decorated with stones. Look whether you can find chariot tracks on the stone or not.

Nymphaeum is an elaborate public fountain adorned with lions’ heads and devoted to the nymphs.

The Temple of Artemis

The Temple of Artemis is impressive ruins of a temple consecrated to Artemis, the city’s patron goddess.

Every evening, there is a spectacular light show that floodlights Jerash’s ancient sites in various shiny colors. After the show, you can ask to go on a chariot ride, which is performed at the hippodrome (circus), including Roman legion tactics, mock gladiator fights, and chariot exhibitions. There are also some annual music and art festivals that you can plan for. 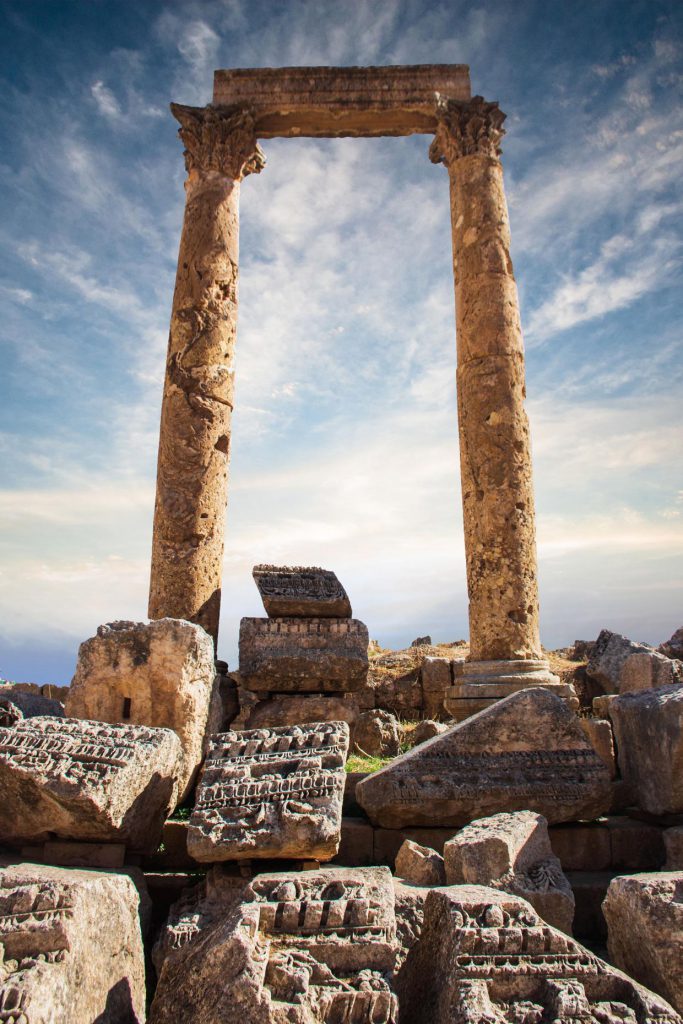 Not long away, outside of the site’s South Gate, there is a small souq, a kind of an outdoor bazaar, providing a comprehensively rounded offering of Jordanian souvenirs and handicrafts. It is accepted among people to bargain about the prices. Local children and teens usually offer you to buy Roman coins and other small artifacts they found on the site. You should refrain from buying them, as this practice is illegal.

You can find several restaurants from which you may choose the food delighting you along the road into Jerash. Past the police kiosk on the main street and down on the dirt road, there is a restaurant called the Lebanese House where you can find mouthwatering Lebanese food, especially if you order Mezza.

There are some places where you can accommodate and get some rest. If you are willing to stay in a hotel, Hadrian’s Gate hotel on Jerash main road may be the right choice for you as it is low cost and very conveniently located. You can also choose to stay at The Olive Branch, which is noiseless and chill, providing a swimming pool and a campground with lots of resort-type luxuries. You can drive there or take a taxi. Also a bit outside the town, you can camp in Dibbin National park. We recommend you to choose this option during the weekdays, as it is pretty busy on the weekends.

On the road to Amman, about 10 miles away from Jerash, you can visit Ajloun and its famous castle. Ajloun Castle is a wonderful maze of passages and levels. It provides a breathtaking view of the surrounding area of northwestern Jordan and off into Galilee as located on the top of a mountain. Irbid city, the leading industrial and authoritative center in the north of the kingdom, can be your next destination providing a good point for exploring further afield to Gadara (Umm Qais), Pella, and some other nearby sites within the region. 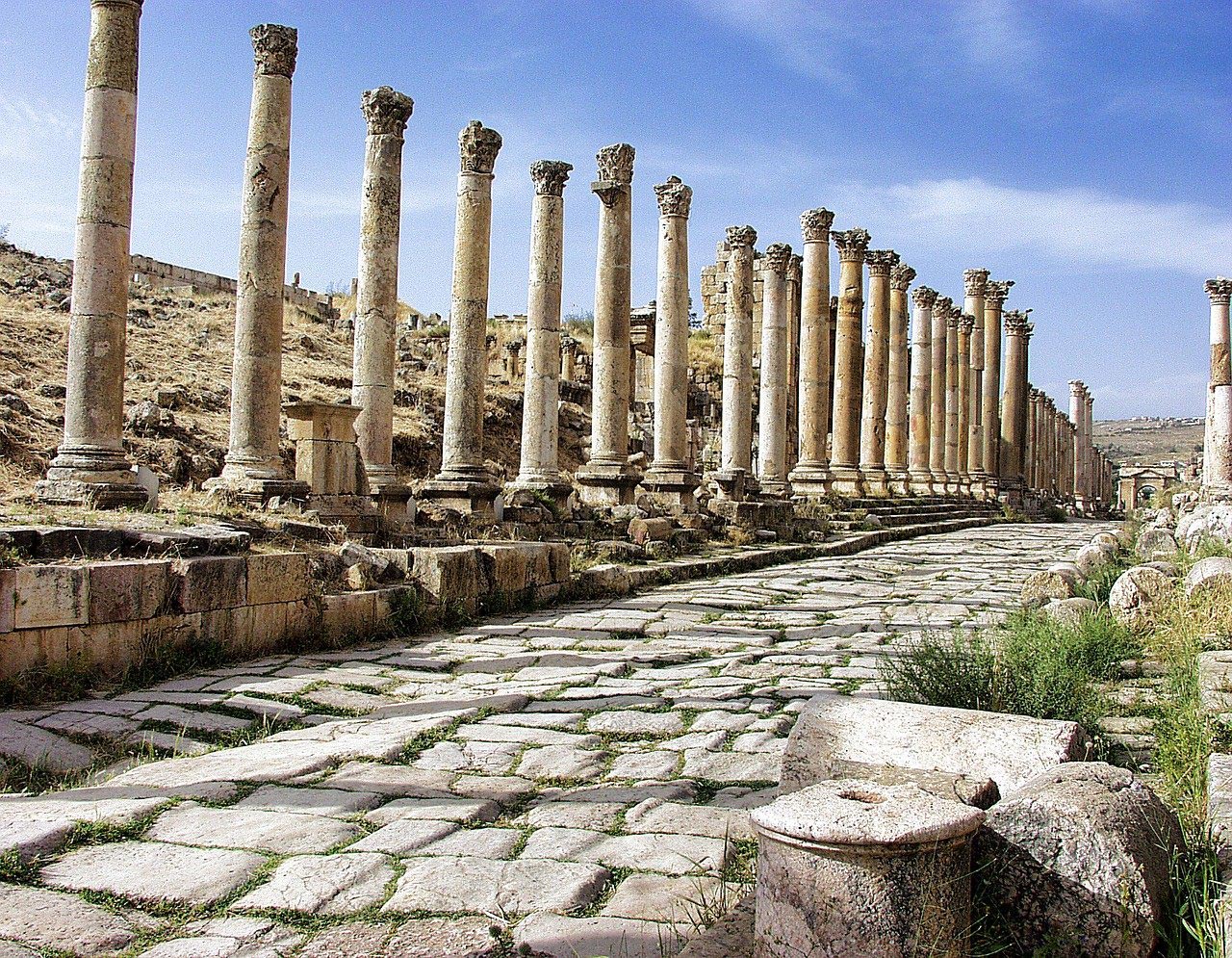 To get to Jerash from Amman, you can drive, take a taxi or get on a bus. If you want to drive there, you should take the north-west road to Salt. Brown tourism signs can lead you there. You can also take a private taxi. With some extra charge, taxis can wait for you to return to Amman after your visit. Remember to negotiate and determine the price before the ride and denominate that the price is for the whole taxi and not per person. But the most cost-effective way is to get there by bus. Buses leave nearly every hour from Tabarbour Bus Station (North station) in Amman to Jerash. There you can find some minibosses to get back to Amman.

You can only walk around Jerash if you wish to visit. But no need to worry, you only need to walk 1.8 miles (3 km). Enter the archaeological site at the southern gate in the south of the Hippodrome. The northern entrance is mostly closed. 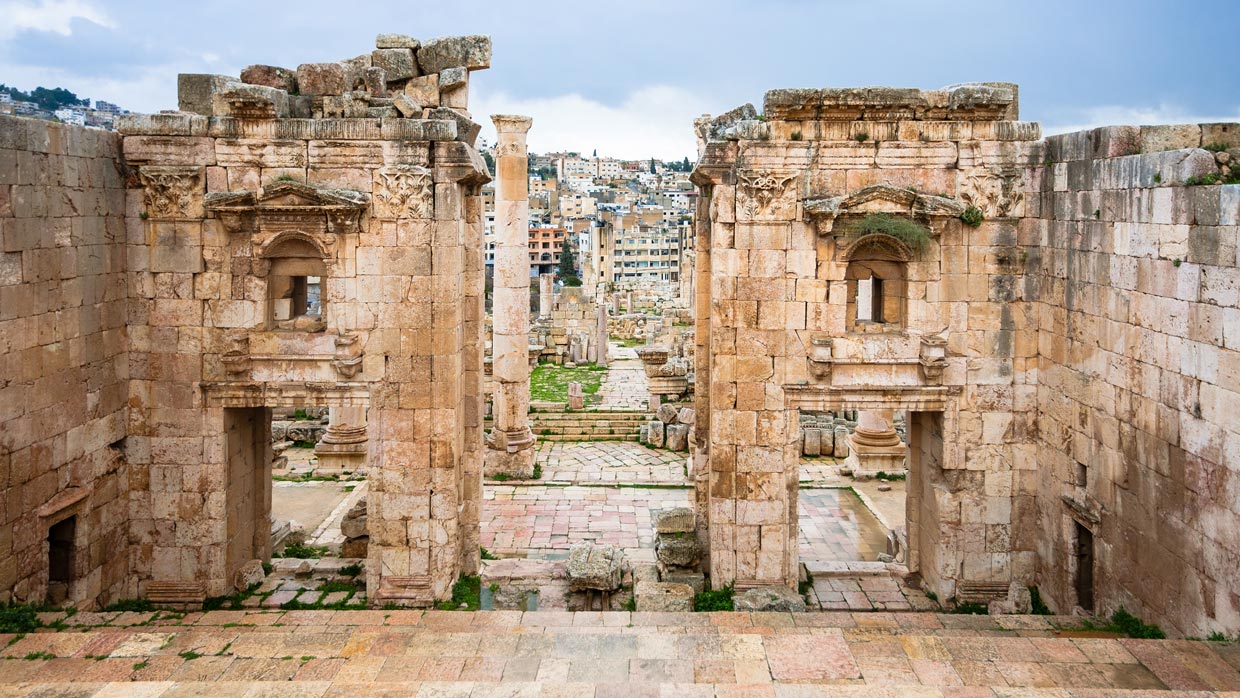 What do you think?

Have you ever visited you to visit Jerash? What interests you the most about this ancient city? We are interested to know about how you imagine walking through the dusty roads of this city.