Jade Buddha Temple is a venerable and peaceful Buddhist temple in the modern and flourishing city of Shanghai constructed in 1882 during the Qing Dynasty era.

Constructed in 1882, Jade Buddha Temple (Yu Fo Si) is a Buddhist temple located in Shanghai, China. This place is famous for two enchanting statues of Buddha made from jade. One of them is a sitting Jade Buddha standing 1.95 meters while the other one is smaller and is a reclining Jade Buddha, which is 0.96 meters tall.

Jade Buddha Temple was built in 1882 during the Qing Dynasty. The history of this place is related to the pilgrimage of a Buddhist monk named Huigen from Mount Wutai. He went to Mount Emei, holy Tibet, India, and finally to Burma to obtain five Jade Buddha statues. After he acquired the five pieces of Jade Buddha, he tried to take them to Mount Wutai, which is one of the four holy Chinese Buddhist mountains.

This is where the main artifacts of the Jade Buddha Temple are kept and worshiped. The sitting Buddha is here for a close look which has 1.95 meters of height. It has a rather round face, half-opened eyes looking down, crescent-shaped eyebrows, a closed mouth, and a straight nose.

Its right-hand looks natural and is toward down while the left hand is on the left leg. The work on this jade Buddha is quite exquisite alongside smooth and elegant lines. To see this beautiful Jade Buddha, you need to go to the second floor of the Jade Buddha Chamber.

The Reclining Buddha Hall is located right next to the Jade Buddha Chamber and it is where the other jade artifact of the temple is kept. The reclining Jade Buddha has 0.96 meters of height, which is very beautifully carved. You cannot see this exhibit from up close and need to appreciate it through the glass. Here, you can see a reclining peaceful Buddha smiling and looking very tranquil.

The Hall of Heavenly Kings is a two-story structure with three doors opening in the south. The Maitreya Buddha figure is located in front of this hall with a smile on the face. The Buddhists believe that Maitreya Buddha will appear on the earth in the future.

The statue of Skanda, who is the protector of the temple and has a vajra pestle in his hands as a weapon, is behind the statue of Maitreya. If you see both sides of the hall there, you can see the Four Heavenly Kings, representers of favorable circumstances in the north, the east, the south, and the west.

The main section of the Jade Buddha Temple is the Daxiong Grand Hall. There are three holy Buddhas; Medicine Guru Buddha in the right, Sakyamuni Buddha in the middle, and Amitabha in the left of the hall. Each statue is around 4 meters tall and shows a peaceful expression.

There is also a statue of Avalokitesvara, a bodhisattva who personifies the compassion of all Buddha, just behind the Three Golden Buddha. The eastern and western sides of the Daxiong Grand Hall are lined with Gods of the Twenty Heavens, which are covered in gold. Outside of the hall, there are 18 unique golden arhats (ones who have attained the goal of the religious life) standing in two groups of nine.

It is a nice place to enjoy a meal before or after your visit to the temple. This restaurant is not part of the complex, and to enter it, you do not need to come through the main entrance of the Jade Buddha Temple. The restaurant serves different kinds of vegetarian food including Arhat noodles, double mushroom noodles, lion head noodles, etc. and the prices are different for each dish, but the average price has been calculated for about 30 Yuan. 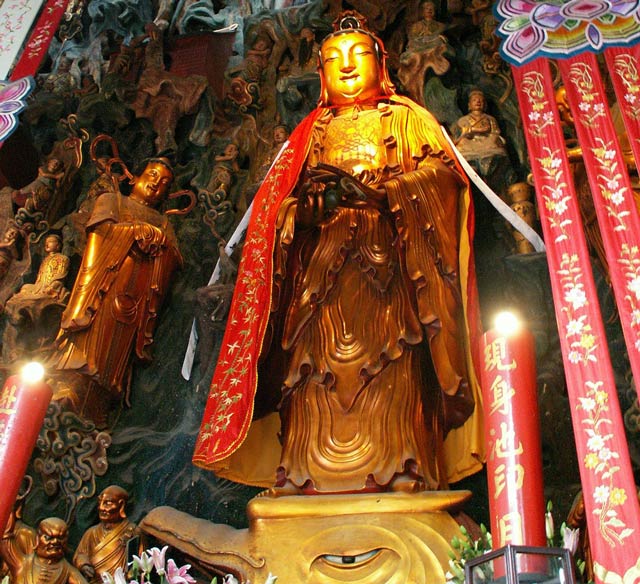 Where Is the Jade Buddha Temple? 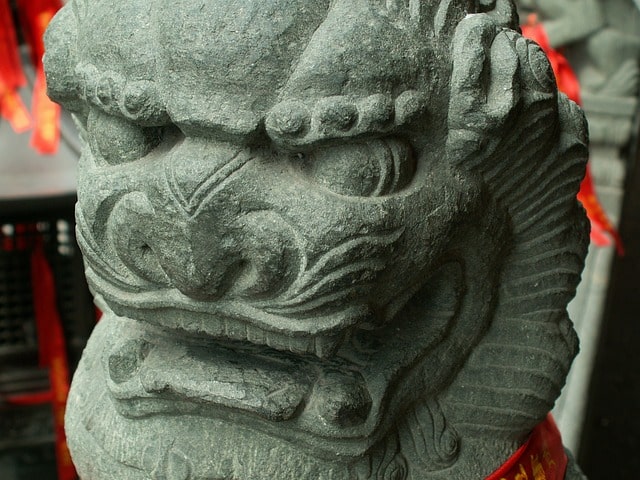 Jade Buddha Temple is among the Top 10 Places to Visit in Shanghai, and it takes around 1-2 hours of your time to check it out. The Temple is a great place to visit all around the year, but in spring and fall, this place gets a little bit more beautiful. Do you have any more information to add? Feel free to leave your comments and thoughts. Also, if you need more information, let us know in the comment section and our professional guides will reply as soon as possible.