Hue Imperial City is the best-preserved remaining of a vast citadel and royal palace complex in Vietnam, which is classified as a UNESCO World Heritage Site.

Empires rise and fall; what remains is the history of their deeds and, of course, their buildings. Although most of the buildings of the Hue Imperial City have been destroyed, there is still some glory to what remains of the Nguyen Dynasty.

This Empire began with Gia Long, who wanted to unite the people of his country, which were divided by conflict. His quest was a very bloody one but with patriotic aims. In any case, he announced himself “Emperor” in 1789 and decades later, ordered the construction of his Citadel in Hue. In 1993, this great historic capital of Vietnam was listed as a UNESCO site.

This heritage site originally had about 160 buildings in an area of about 520 hectares. As of today, only 10 of the major places of this complex remain. Plan you visit or go on a walking tour in the heart of what remains of the Last Empire that existed in Vietnam.

History of Hue and the Imperial City

The Nguyen Dynasty ruled for 143 years and were the last dynasty to hold power in Vietnam. Emperor Gia Long began his rule in 1789 but the construction of his Imperial City began in 1804 with a Purple Forbidden City in the middle. The entire Citadel was constructed in the direction of Huong River, AKA Perfume River.

This direction was out of the ordinary since another building called Forbidden City in Beijing was constructed facing the true south of the planet while the river was in the southeast. The reason behind this decision was a spiritual one as the Emperor had ordered his geomancers to find him the most suitable place for his Imperial City.

The Hue Imperial City remained the seat of power for the Nguyen Dynasty while they ruled, and after their reign held only a symbolic position. This symbolic seat of power was left abandoned during the occupation of French Colonists but nothing other than natural disasters and termites damaged it during these times.

Later on, when the French were evacuating, they destroyed many of the historic buildings of Vietnam on purpose or by accident, but the damages were not as great as the time of the Vietnam War with the Americans. After the year 1968, the city was bombarded, leaving only a small number of the building standing. All these harsh times ended in 1993 as the building was listed on UNESCO. Ever since that day, it had seen major renovations, and anything that was left standing was restored. 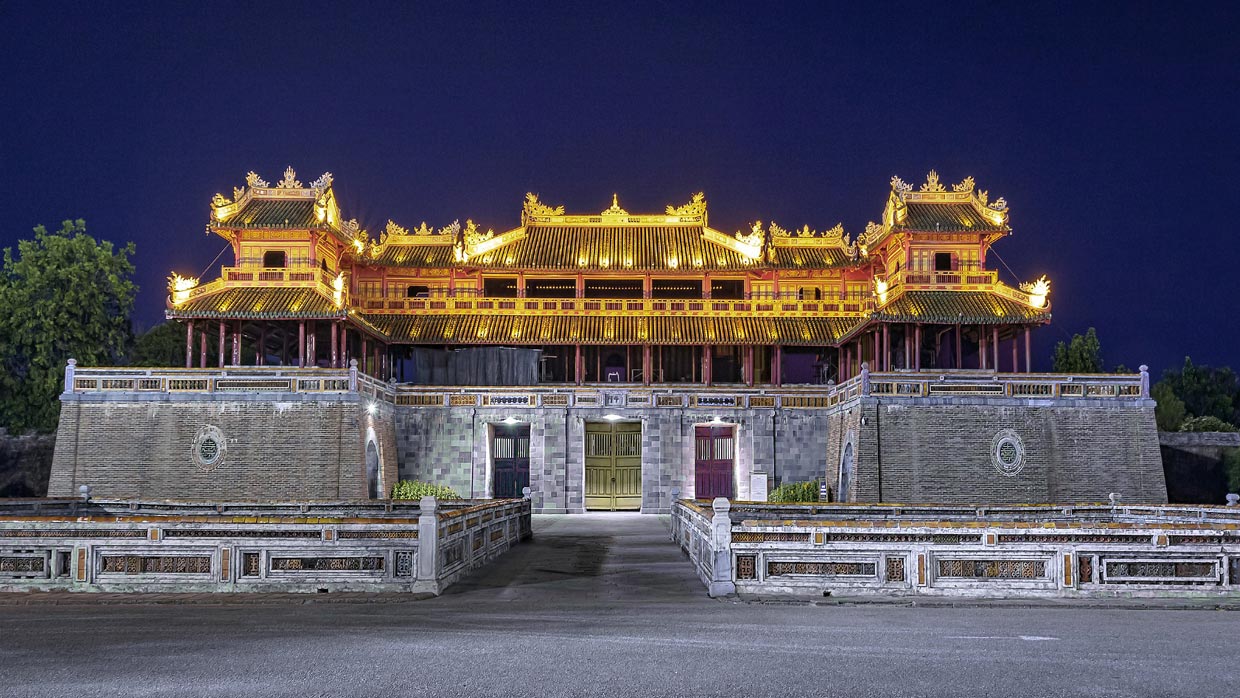 The Citadel and the Purple Forbidden City are heavily fortified and have elements of French and Chinese architecture in their construction. This influence in architecture was because of the support (however small) from the French that later on came to colonize the country in the 1880s. It used to have two sets of moats and two walls, one around the Imperial City and another one surrounding the Forbidden City. The water for the moats came from the Huong River due to the southeast of the Complex. These brick walls are 6 meters tall and 20 meters wide in most sections, added to the moats, they were seemingly impenetrable.

Among all the remaining buildings and gates that remain, some of them are places that you must visit either on a tour or by yourself. The Complex used to have many temples, gardens, and military buildings, among other places. Having a guide and being on a tour gives you the advantage of learning about the history of this large Citadel but you can still enjoy it even on your own.

Perhaps the most important part of the Imperial City of Hue is the Purple Forbidden City, where the Emperor lived and carried on his duties as the ruler of the land. When visiting this palace, make sure to visit the Dai Cung Mon as well (The Great Golden Gate), which was only usable by the royal family. This section was forbidden for most people, as the name suggests because it was also the living quarters of the Emperor’s family. Any man that would break the rules and enter the palace without permission would be severely punished.

The Temple of Generations – The Mieu

This Shrine or Temple was built to be the final resting place of the Nguyen Dynasty Emperors. Inside, you can see nine urns, each dedicated to one of these rulers that united the country and helped it prosper from 1802 to 1925. Most of the temple was left in ruins because of the wars, and the remains of the Emperors are not actually here, but the place is mostly restored. It still has the same sensation of peace and solace as it had when each of the royal family members came here to worship and visit their ancestors.

The Thai Hoa Palace was where the Crowning of Emperor Gia Long took place. This hall is mostly made out of timber and is one of the few buildings that remained mostly intact. Although it was mostly intact, it did however undergo major restorations to become as beautiful as it is today.

The place was mainly used for events and official gatherings and rarely open to the public, but not it is a place where everyone can enter. This palace is near the heart of the Citadel and across the Ngo Mon Gate. The architecture of the place was to resemble the balance and harmony of Yin and Yang. As you walk around the building, you can enjoy the beautiful gardens and a lotus pond, all of which make this site a must-see in Hue. 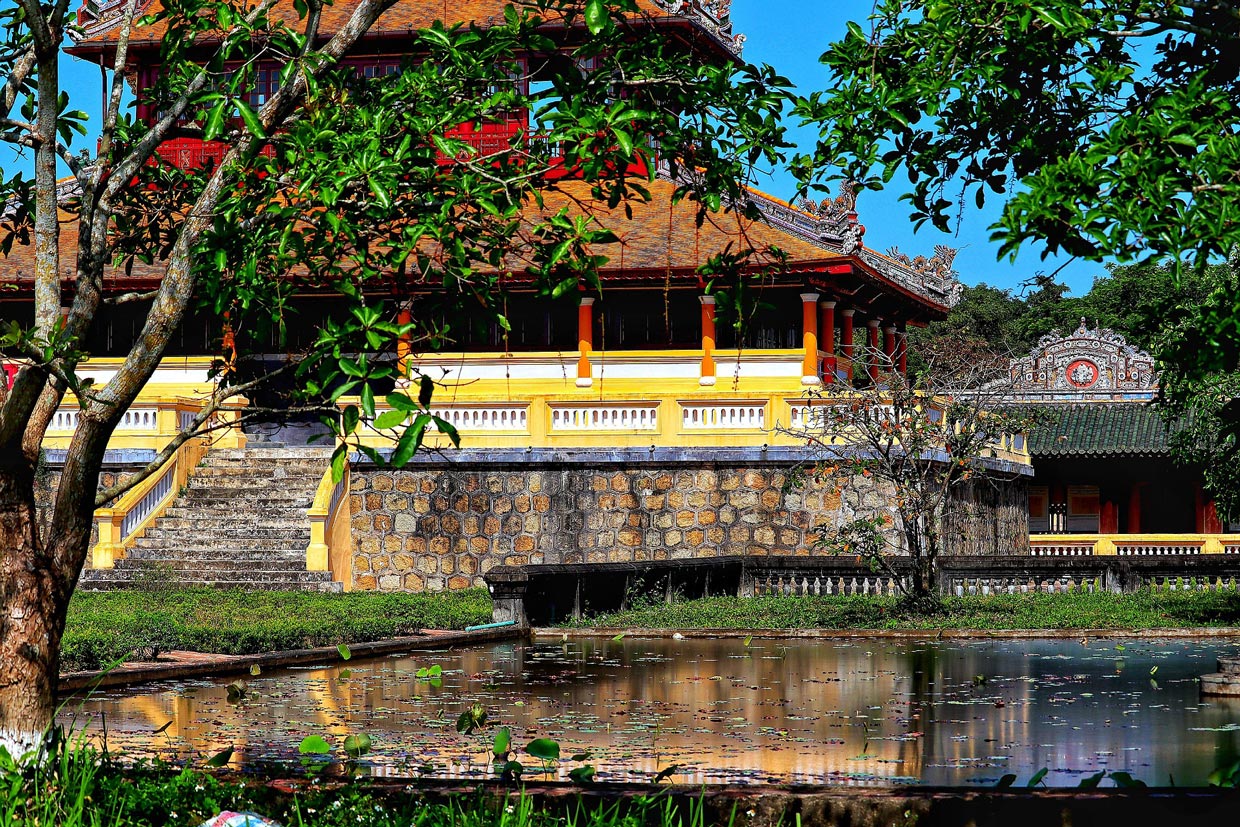 There are of course many places to see inside a large complex as the Imperial City of Hue, such as pavilions, temples, and gates. Imperial City tours will take you to the most important places and make sure you are having a good time, but you may not see all of the places. If you go on tours or go on your own, it is a good idea to walk around or explore on bicycles.

Alternatively, you can also visit the areas around the Citadel such as the Huong River, or try hiking up one of the nearby mountains. In any case, a visit to this Complex will take about 5 hours to see the best places.

Be careful when paying for tickets as it is seen by some visitors that the ticket booth may swap a 100,000 VND with a 10,000 VND note. This happens rarely but be careful not to be scammed.