Huaqing Pool (Huaqing Palace) is a fantastic hot spring complex in the eastern neighborhood of Xi'an, which used to be the Imperial Pools of the Tang Dynasty.

Huaqing Pool, also called Huaqing Hot Springs, is a hot springs complex in an area with scenic views and mild weather. It is located on the northern side of Mount Li on the east neighborhood of Xi’an, China. Huaqing Pool is a significant tourist spot, and China’s National Tourism Administration has classified it as an AAAAA scenic area. This Pool is near the famous and magnificent Terracotta Army. This place used to be the Imperial Pools of the Tang Dynasty (618 – 907). (Photo by © macchi via Flickr)

The hot spring was served as a place for multiple functions during different Chinese dynastic rulers. Among them, the Zhou Dynasty’s King You, Qin Dynasty’s Qin Shi Huang, and Han Dynasty’s Wu Han are worthy mentions. Emperor Xuanzong of the Tang Dynasty rebuilt the structure of Huaqing Palace in 723. It is said that the scene of his romance with Yang Guifei, his spouse had happened here.

This site took considerable damage during the events following the An Lushan rebellion. Although many events transpired here, Huaqing Pool has held its historical legacy during history. A great example here would be Bai Juyi’s poem about Emperor Xuanzong and Yang.

In 1936, the Xi’an Incident happened here when former warlord Zhang Xueliang kidnapped Chiang Kai-shek. He then forced him to participate in a United Front with the Chinese Communist Party fighting the Japanese encroachment on China.

There are different sections inside the Huaqing Pool Complex.

Still, five hot spring pools are remaining inside Huaqing Pool which are:

The Lotus Pool looks like a lotus and Emperor Xuanzong used it as his private bathing pool.

It is said that The Star Pool did not have a roof, so it was the perfect place if you wanted to go at night and enjoy the starry sky.

Shangshi Pool and the Prince Pool

Shangshi Pool was meant for the officials, and of course, the Prince Pool was for the Prince.

The Pear Garden is among the most famous imperial theaters in all of China. Here, Emperor Xuanzong and Yang Yuhuan (his concubine) created numerous tunes and dances; however, Ni Shang Yu Yi Qu, which is the most famous one has been long-lost.

Frost Flying Hall, known as Feishuang Hall in Chinese, is located on the west side of the Pear Garden. It was Emperor Xuanzong’s bedroom palace, and its name has an interesting story. The hot springs here made the whole hall a warm place, so during the snowfall, all the snow would quickly turn into frost.

If you go southward from Frost Flying Hall and Pear Garden, you will reach the Nine-Dragon Lake. This part of Huaqing Pool covers around 530 square meters (634 square yards), which is divided into two parts. Also, there is a bridge on the lake. The name comes from 9 dragon stone carvings in the area. Eight dragons are on the bridge and the last one is under a pavilion by the lake.

Five-Room Building is another construction in Huaqing Pool. In 1900, when Beijing was captured, the Eight-Power Allied Force used here as a shelter for Empress Dowager Cixi. Also, this place has been the temporary residence for Chiang Kai-shek during the Xi’an Incident on December 12th, 1936. He was the leader of the Chinese Nationalist Party and on that day, he was kidnapped by two of his generals from this building. Then he was forced to unite all Chinese people for a fight against enemies.

Mount Li is a beautiful part of the Huaqing Pool Scenic Area. It is also known for the Beacon Tower fortification built during the Western Zhou Dynasty. There is a cableway facility here, which you can use to have a more enjoyable time in this scenic area. You should buy a 60 Yuan ticket to have a round trip with cableway. 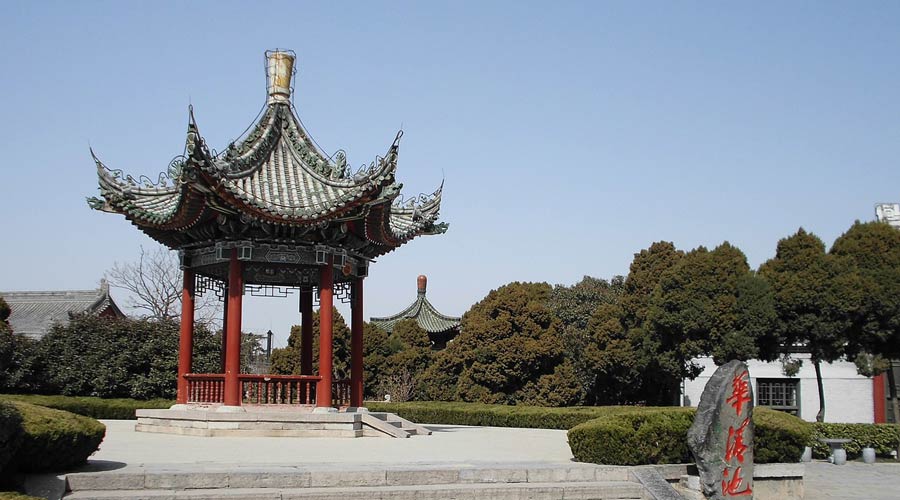 The Song of Everlasting Sorrow Show

If you are going to visit the Huaqing Pool, make sure to watch The Song of Everlasting Sorrow Show in the evenings. Watching this show will help you to get a better understanding of the Tang Dynasty history. Also, the English brochure will be provided for you to be more familiar with the story. 10 scenes are acted in the show about different stages of Yang’s life. Other elements like Chinese traditional music, Tang styled dance, and poem narrations are combined with the show. Since 2007, over 3.5 million audiences have watched the performance, which is noticeable.

The Song of Everlasting Sorrow Show is held from April 1st to October 31st for about 70 minutes in each performance.

There are two performances each day:

Special buses are provided here for you to get back from the show to the downtown area in 1 hour.

How to get to Huaqing Pool?

Reach it from Xi’an by Xi’an Railway Station

From West Gate or South Gate of Tang Paradise

From West Gate or South Gate of Tang Paradise, get on Bus No. 307 to Huaqing Chi Station.

Get on Bus No. 101 from Lintong to Huaqing Chi.

Remember to get your train ticket on the arrival day so you could take the free shuttle bus to Lintong attractions. The bus takes around an hour. Keep in mind that you have to go to the Tourist Service Center to get your boarding pass alongside your train ticket. The center is located on the underground of Xi’an North Railway Station.

Keep in mind that tourists are not allowed to use hot springs in this scenic area; however, you can try it in hotels and resorts such as Huaqing Palace Resort & Spa on the west side of the palace. It could be a delightful experience as it was for Emperor Xuanzong and Yang Yuhuan! Since there are limited rooms in these hotels, you should book them in advance. Have you ever tried hot springs? how was your experience? feel free to leave your comments for us. Also, if you have any questions about this palace, send them to us and our professional guides will reply as soon as possible.