The Holi event marks the beginning of the spring which is between February and March, or in the Hindu calendar, on Phalguna. There is no exact date since the calendar is based on the lunar circle.

In Asia, many celebrations are associated with life, rebirth, the triumph of good over evil, connecting humankind, and many other things in life. Perhaps the best example of such ceremonies or rituals is the Holi festival (होली in Hindi) held in India, a land that is famous for peace and also known for love. There is a legend behind this event, in addition to spiritual and religious stories, but that does not mean you have to be a Hindu or even a local to participate. People from all around the world can stand next to Indians and feel welcomed by them as the festival is also held to bring harmony.

What is the Holi Festival?

Legends or not, the festival is for people to play with color powders and water balloons to have enjoyable moments. People of all ages, regardless of their religion or race, will play in the streets by using bright color powders or water guns. They also sing, dance, and greet one another, offering treats and snacks to each other. Lovers, friends, and family members will color each other in joy just as the earth gains a new life.

Some people make traditional drinks called Bhang, which will make you feel a little high! It is said that the drink will make you spiritually more attuned, allowing you to enjoy yourself and the Holi festival even more. If you decide to try this drink, be careful not to overdo it as it can be intoxicating, which means it can ruin the day for you and those around you. 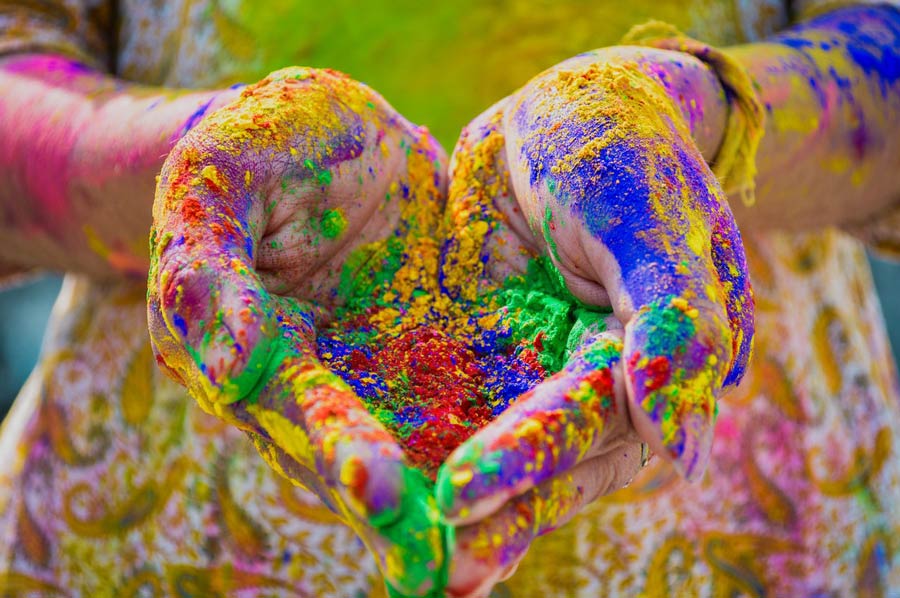 The Holi Festival of India

By the time you sober up, in case you try the Bhang, you will face the evening and nearly the end of the celebration. During the evening of Holi festival, by tradition, friends and family members visit each other and spend some time in the company of their loved ones. By custom, they come bearing sweets or food during these meetings.

There are of course some other ways of celebrating this day, which is because of the several other legends or traditions that are believed in other areas as well. One example is walking on hot and flaming coal. Also, there are safer games that people can play! The significant markers of this event are the bonfires in Holi eve and the bright colors that are used in the next day. The most important thing celebrated by all people is the arrival of spring, and therefore, a new life.

You can look up the Holi festival with its other names as well. This event is also known as the Festival of Colors, the Festival of Love, and the Festival of Spring. The evening before the main festival, when the bonfires are lit, is called Holika Dahan and the following day is known as Holi or Rangwali Holi by the locals. Just as we recognize it with different names, the Indians themselves also use several other names depending on their location in their country.

Where is Holi Celebrated?

Holi festival is most famous in India and the entire country will be prepared for that. Travelers from across the globe gather and participate in this joyous day right next to the locals, as brothers and sisters. As it’s the festival of friendship and celebration, exchanging gifts, especially food and sweets, is highly popular.

The festival originally belongs to India; however, it is possible to see this event in other places where Indians or Hindus reside outside their home country. If you have never experienced Holi before, make sure that your first time will be in India and Nepal, or even the southern regions of the country. You can also find traces of it even in North America and Europe as well, but the festival in India is something extra special. The word of love and peace travels fast, but hearing it in the place where the rebirth of nature is always celebrated, is something you do not want to miss.

An important reason for the celebration is the rebirth of nature which brings life to both people and the planet. It is somehow similar to thanksgiving since the spring will make the earth ready for farmers to produce food; however, the food and the nourishment are only small parts of life circle. On the other hands, according to the legends, this is the celebration for the victory of good over evil. 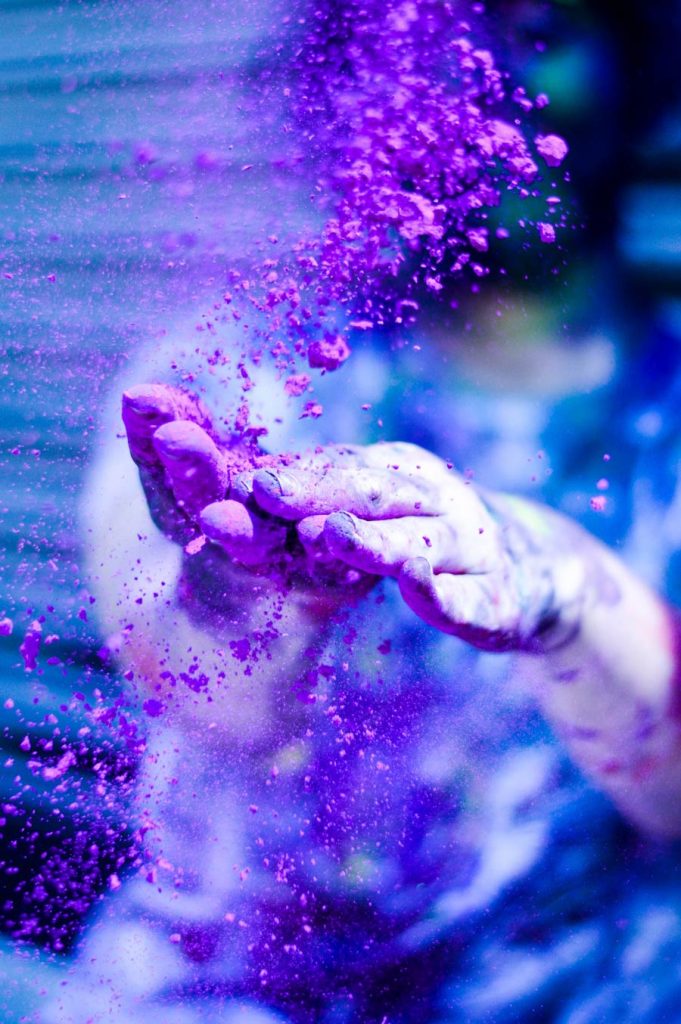 The Festival of Colors – Color Powder

Holi Festival has roots in legends and tradition as well. It is said that the king HiranyaKashyap, known also as the demon king, ordered his subjects and people to worship him as a god. His son, Prahlad, who was a symbol of good, stood against this order, and therefore, the king attempted to kill him. Holika, the sister of Prahlad was sent to lure him into a trap so that he would be burned alive. She was given a protective cloak to be kept from burning but since he was a pious and honorable man, fate turned the table to his favor and saved him from the fire, and instead, his evil sister was burnet by the flames. Ever since that day, people light bonfires at the beginning of the ceremony, which will last until the end of the next day. 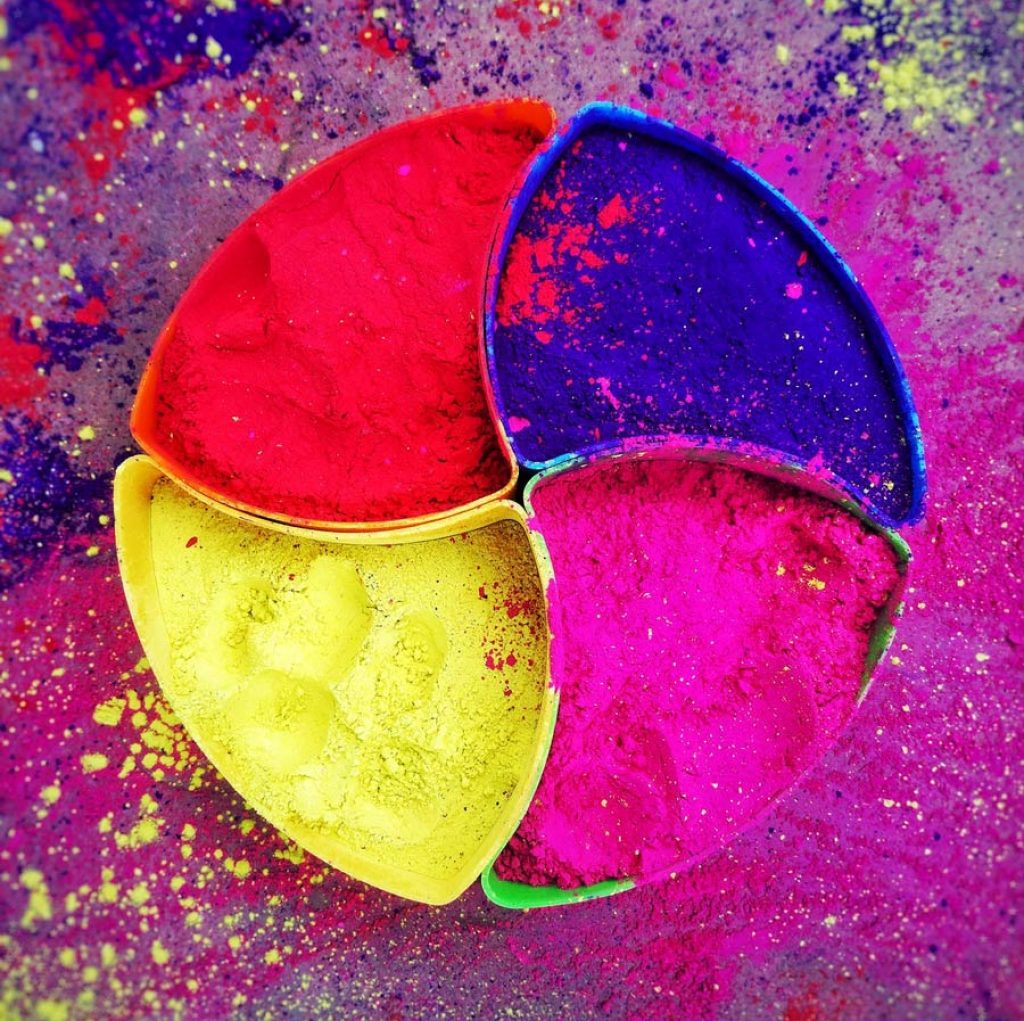 Color Powder In The Festival of Colors

Special Considerations During the Festival of Colors

Do not forget the gifts!

The most important consideration is the preparation. As you have already been acquainted with this Hindu event, you need to remember, going empty-handed may not feel as quite good. It is not rude, but it is still not considered as very appropriate either. For this type of preparation, you can always get something to exchange from the markets to give to your family members and the special individuals in your life, or perhaps the friends that you make in the streets. The gift does not have to be anything more than sweets. The act is important on this day, not the gift itself.

The other part of the preparation, which can be even more important, is making sure that the colors you use will not harm you or the others in this festival. Since no one can avoid being hit by the powders or water balloons, make sure to use natural colors.

Wear appropriate clothing to avoid the colors reaching your skin just to be safe. Other than that, you can use oils to protect your hair or skin from any damage.

Try to have a guide or participate as a group

While having a blast with the rest of the people, remember that some of the participants may be high on Bhang. As a piece of advice, try to have a guide or travel with a group to avoid accidents. If you are not careful, you may get “carried away” during the Holi festival as well as anyone else.

Get cleaned after the festival

After the festival, make sure to get cleaned and do not worry about getting wet and dirty during the day. Remember, the whole point is having fun, making friends, and celebrating the coming of spring.

There is a famous quote used by locals, which says “Bura na mano, Holi hai!”. It means that “Do not mind, it’s Holi!”; therefore, have fun, and don’t forget to tell us about your experience at the Holi festival. Also, if you have any questions about this fantastic festival, feel free to leave that in the comment section and our professional guides will reply as soon as possible.