Ho Chi Minh Mausoleum Complex is a holy place for most Vietnamese as it's the resting place of Ho Chi Minh, who was a national hero for the people of Vietnam.

The Ho Chi Minh Mausoleum Complex is the final resting place of one of the most important political figures in Vietnam. Ho Chi Minh was a National Hero and a person who was loved by all the people, and for that reason, many Vietnamese people called him ‘Uncle Ho’. (Photo by © Paul Mannix via Flickr)

This prominent character in the history of Vietnam had a vague life with several theories on when exactly he was born and how he lived his life. Most people claim he was born in a village called Nguyen Sinh Cung between the years 1890-1895 and he was first educated by his father, who was a Confucian scholar. His family members were rather educated, but they did not like to serve the French rulers of their time; thus, Ho Chi Minh gained their rebellious trait as well.

During the years, his earliest teachings were from his father, who was a scholar. As he grew older, he tried to gain an education while being on the move from one place to another. First, he headed to the south of Vietnam and then to France. Later on, it is believed he has gone to the United States and afterward to Britain. He constantly changed names and attempted to get educated in one place or the other until he found himself in Soviet Russia. Having gained enough knowledge and experience on his path, he returned to his home country in 1941 and began his work as a political character.

After the war and gaining the independence of Vietnam, he was elected as president from 1945 until 1955. After years of service to his people, both in the office of the president and outside this political seat, he died in 1969. This Uncle or Father Figure of the country has saved Vietnam from the years of destruction caused by the French invaders, which is why the Ho Chi Minh Mausoleum Complex keeps his memory alive as The National Hero he was.

Even though Uncle Ho wanted a simple burial and asked to be cremated, the people of Vietnam could not bear this loss; therefore, they built the Ho Chi Minh Mausoleum in his memory. When he had passed on, the country was divided into two; the north was governed by the Vietnam people and the south by the Americans.

It was decided to make this building in the Ba Dinh Square, which was under the control of people and it was also an important part of their history. The Architecture of this construction was inspired by the Mausoleum dedicated to Lenin.

During the last years of his life, several experts learned how to embalm a corpse in case of the death of their beloved president. The process of embalming and building the Ho Chi Minh Mausoleum was thought to them by the Russians, who also helped with the construction.

When he passed away, the construction began, but the people did not follow the Russian instructions to the letter and used their own architecture for the monument. As soon as the building was finished, the preserved body of Ho Chi Minh was placed inside a glass display inside the Mausoleum.

People used local materials to show respect to their president. Each province sent something as the signature of their city or town to be added to the building. Inside this monument, you can see the flags of Vietnam and the Communist Party, which he supported during his life. Other than that, you can see one of his famous quotes written in gold letters. This sentence translates to: ‘Nothing is more precious than freedom and independence’ which he fought for until the end of his life.

You can see the marble columns of the Ho Chi Minh Mausoleum from a distance, as well as the traditional design of the building, which matches that of the Vietnamese Traditional Houses. Moving closer to the structure, you can see the words ‘Ho Chi Minh President’ above the entrance. 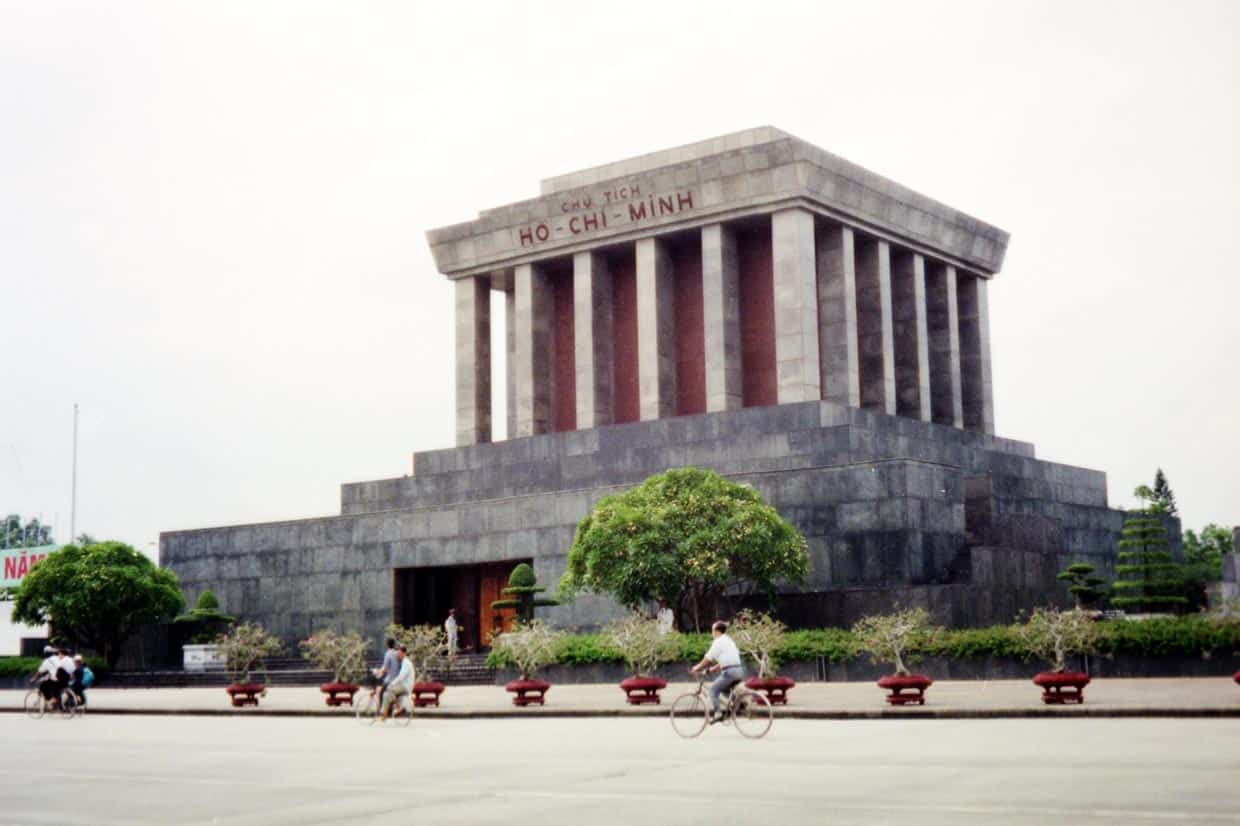 The building known as The Presidential Palace was originally built from 1900 to 1906 for the French Indochina Governor. The architecture is the design of a German architect who used local and imported materials to make the most luxurious building of that time. The color patterns of the structure were also made to resemble the superiority of the French Colonists as the yellow color was only used by French royalty.

The Presidential Palace, like Ba Dinh Square, had another name before 1954. It used to be called the Indochina Governor Palace. While it was originally intended to be the house of the president, Ho Chi Minh refused to live there while his people lived in Poverty. Instead, he chose to live in House No.54 in the nearby garden. Because of this reason, the Presidential Palace was and still is used only for official business such as holding meetings or welcoming foreign guests and delegations. This location is not open for visiting, but it is still an important part of the Ho Chi Minh Mausoleum Complex.

Ba Dinh Square is an area where many important political events that had happened in the history of Vietnam. This square was renamed by Ho Chi Minh as soon as he and his political allies have gained power. It was here where the French government had built their offices, where you can see several elements of their architecture even today. The name Ba Dinh was the name of a village where the first war against the French colonists took place. In honor of this war, Uncle Ho renamed the square and read the Declaration of Independence here, as was mentioned.

As a place that reminds the people of their freedom and their hero, Ba Dinh Square was the perfect place for this building. The square can be accessed via the Hung Vuong Street near the western Hanoi ancient gate. 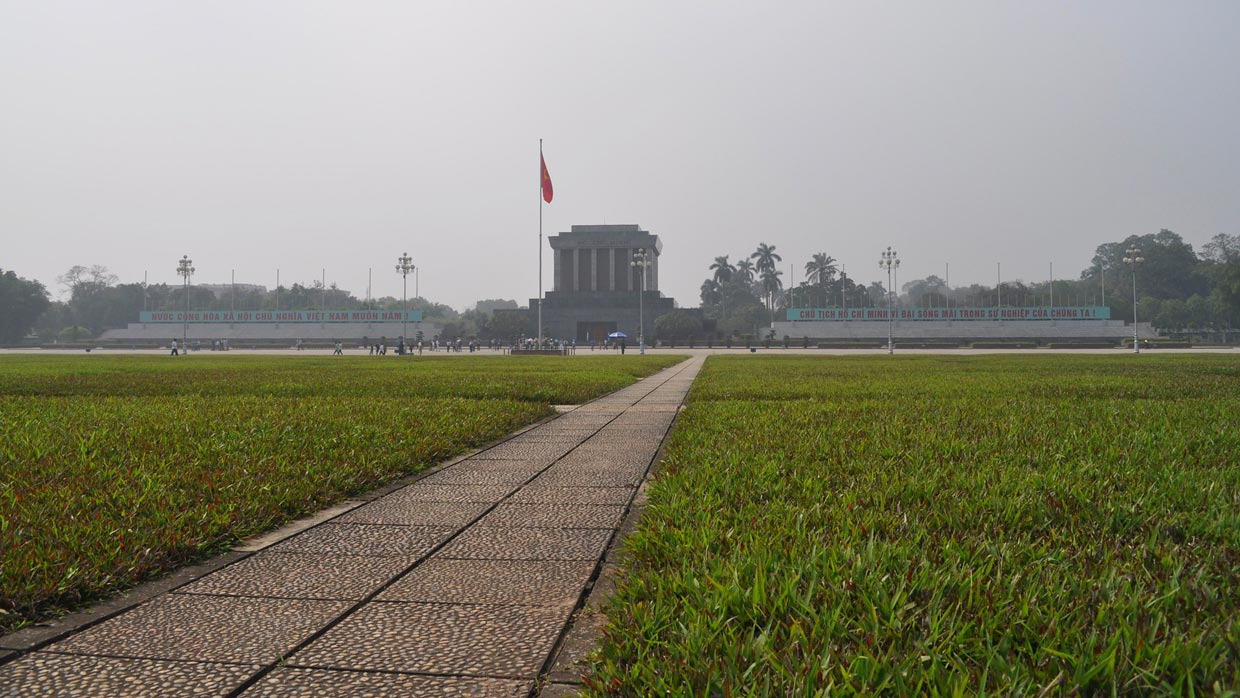 Ho Chi Minh used to live in this simple house with three rooms from 1954 to 1958. The house belonged to an electrician that used to take care of the Presidential Palace. House No.54 is small and has only a living room, a bedroom, and a kitchen. Most of his facilities were gifts from other communist leaders and his followers and friends.

Since he was living alone, he had a radio, which was a gift from his Hungarian students to keep him company and allow him to ‘warm up by hearing a human voice’. Other than that, he had a thermostat in his kitchen, indicating when it is too cold for students to attend school. Last but not least, he had a round table, also a gift, from Fidel Castro that had a Khuat Nguyen Poet Statue on it.

Aside from his humble belongings inside the house, he had three cars that were also gifts from his friends and allies. He was given a car by The Soviet Union, for traveling long distances and roads called The Pobeda. Another gift from the French-Vietnamese people ‘The Peugeot’. And finally, the last gift for national leaders of allies is called The Zis, which is the largest of them all that is also bulletproof.

After several years of improvement in the country, the officials decided that Uncle Ho deserves a better house. Seeing how his people were living in better conditions, he agreed to have his own house, built inside a garden left by the French. The design is similar to that of the houses in the Northern mountainous, where he used to work in his earlier years. Even in his new house, he lived a simple life among the things that were gifted to him as well as his books. The house has two floors, the first for meetings and the second as his living quarters.

As soon as the house was ready, people gave trees and flowers from all over the country since they knew Ho Chi Minh loved living in green places. There are also ponds in the same garden with fish that Uncle Ho used to feed. Whenever he came to feed his fish, he used to clap his hands so that the fish would come and eat. It is said that the fish kept this habit for years after his death. 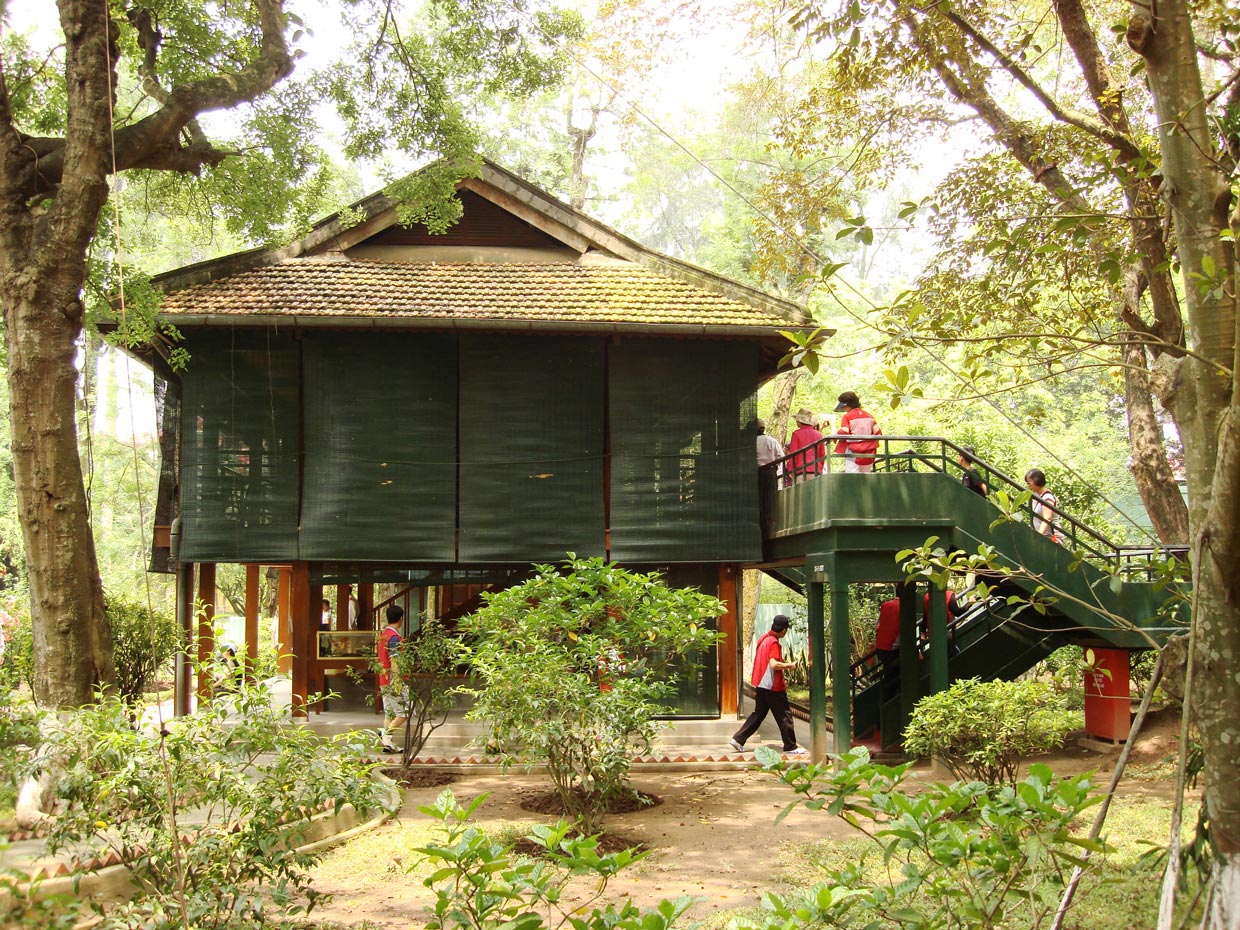 One Pillar Pagoda is a sacred place and a part of Vietnam’s history that was unfortunately destroyed by the French in 1954. Being an important part of the city, Ho Chi Minh ordered its reconstruction after Independence Day. The renovation of The Pagoda was finished in 1955 and it was reopened to the people. One Pillar Pagoda was a part of Hanoi history and culture ever since it was built in 1049 by the order of King Ly Thai Tong.

The story behind this building is that the King had no children. One night during his sleep, he was visited by the Goddess of Mercy and had a vision that he will have a son. The Goddess was sitting on a Lotus in a dirty pond (the national flower of Vietnam) and gave the King a son. Later on, the King married a peasant and had a child. Therefore, in honoring his gift from the Goddess, he builds the One Pillar Pagoda to resemble The Lotus he had seen in his dream.

Not only bringing freedom and prosperity to the lives of his people, but Uncle Ho also preserved their history and culture by rebuilding this Pagoda. It is free for everyone to come and visit the Pagoda and even prey. 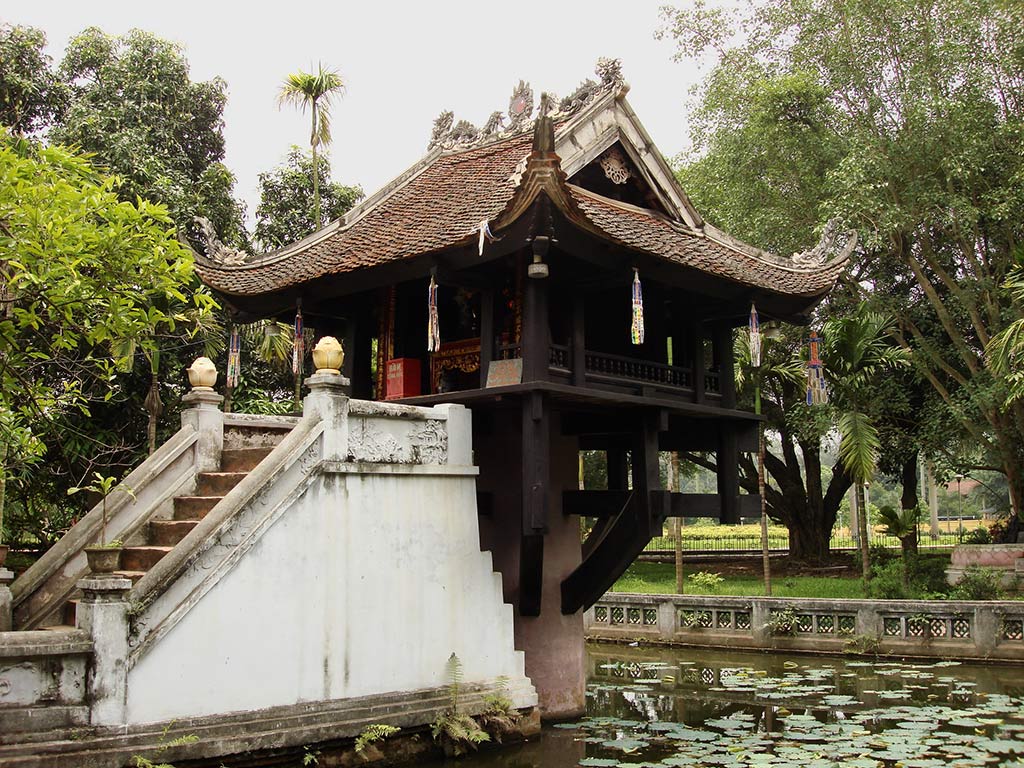 Last but not least, there is the Ho Chi Minh Museum located near the Ba Dinh Square as another part of the Ho Chi Minh Mausoleum Complex. This magnificent building covers an area of about 4000 m2 with 3 floors. The Museum was built and opened in 1990, exactly 100 years after the birth of Uncle Ho.

The unique architecture of this building is similar to the shape of the national flower of Vietnam, the lotus. Inside this building, there are documents and artifacts related to the life and actions of Ho Chi Minh and the history of Vietnam’s revolutionary stages.

On the first floor of the Museum, you can find a hall with 400 seats, used for the most important meetings and gatherings. On the second and third floors, you can find the mentioned documents and artifacts of the late 19th century and 20th century Vietnam. These items count to more than 2000 objects, reflecting both the life of this great leader and his achievements as well as a part of Vietnam’s most important era.