Hawa Mahal- The Palace of the Winds in India

Hawa Mahal palace is an expanded portion of an immensely complex. Some of these famous tourist spot features are the stone-carved windows, miniature casements, and arched roofs, and there are also delicately modeled hanging cornices on the monument.

Hawa Mahal, also known as, The Palace of the Winds or The Palace of the Breeze, has a history of more than 200 years and is perhaps the most famous monument in Jaipur. It is a palace in Jaipur, India, built from red and pink sandstone, some 300 kilometers from Delhi’s capital. The castle sits on the edge of the City Palace, Jaipur, and extends to the Zenana, or women’s chambers. Maharaja Sawai Pratap Singh was Jaipur’s architect. He was so inspired by Khetri Mahal’s unique structure that Lal Chand Ustad designed Hawa Mahal similar to its architecture, and Singh built this grand and historical palace in 1799.

The architecture of Hawa Mahal

This palace is a pyramid-shaped monument with five stories that rise to about 50 feet (15 m). The palace’s top three floors have the width of a single room, while in front of them, the first and second floors have patios. As seen from the street, the front elevation of Hawa Mahal is similar to a honeycomb with small portholes. There are small windows and carved sandstone grills, finials, and domes in each porthole. It gives the appearance of a mass of semi-octagonal bays, offering its distinctive façade to the monument. On the rear side of the building, the inner face consists of chambers constructed with minimally ornamented pillars and corridors, reaching the top floor. Visitors describe the interior of Hawa Mahal as having rooms of various colored marbles, relieved by gilding or inlaid panels; at the center of the courtyard, there are several marvelous fountains.

Added to wishlistRemoved from wishlist 0
Add to compare
From: $851.00

The exterior of Hawa Mahal, with 953 small windows, as we mentioned, creates a honeycomb-like visual, the architects decorated these windows with intricate latticework called Jharokhas. The original purpose of the lattice design was to allow royal ladies to observe everyday life and festivals celebrated without being seen in the street below, as they had to comply with the strict “purdah” rules, which forbade them from appearing without face coverings in public. This architectural feature of Hawa Mahal also makes it possible for cool air to pass through from the Venturi effect, making the entire area more pleasant during the high temperatures in summer. To preserve Jaipur’s historical monuments, the Unit Trust of India adopted Hawa Mahal, and they began renovation work on the Mahal in 2006.

In the courtyard of the Hawa Mahal, there is an archaeological museum that displays a fine collection of antiquities, weapons, and other objects used by the royals. The museum was founded in 1983 and will give you a glimpse into the region’s royal past. Significant exhibits in this museum include; Arrowheads, fish hooks, terracotta objects, a 2nd-century storage vessel, and various other fascinating historical artifacts. Recently, in an attempt to promote night tourism in the city, the tourism department illuminated the exterior of Hawa Palace. Unlike other palaces, the front of the palace has no entryway, so you have to enter through a door at the side of the building.

Each of the Hawa Mahal’s five floors has a temple inside that is worth a visit. On the first floor, there is Sharad Mandir, and on the second floor, there is Ratan Mandir with colorful glasswork. Vichitra Mandir, Prakash Mandir, and Hawa Mandir occupy the top three floors. However, there are no stairs to enter the upper floors of the palace, but back in the day, to easily carry Rajput royal ladies’ palanquins, they built ramps that now you can use to visit every floor. On a final note, keep in mind that The best time to visit Hawa Mahal is when the golden sun rays light up the entire red and pink structure in a spellbinding way during the sunrise and sunset hours.

While in Hawa Mahal in India, there are many locations that you can visit as well that are near the palace. But you might wonder which of them is worth your time and why you should see one and not another. To answer that question and save you the trouble, we have provided for you 3 of the most visited locations in the vicinity of Hawa Mahal, plus some needed information on these locations, to help you decide and make your visit more productive and enjoyable.

Maharaja Sawai Jai Singh II built the palace at the same time as the city of Jaipur, who moved his court from Amber to Jaipur in 1727. Approximately 0.85 km further from Hawa Mahal, the City Palace is in Jaipur, which is the present-day capital of the state of Rajasthan, and the City Palace was the ceremonial and administrative seat of the Maharaja of Jaipur until 1949. The Palace was also the location of religious and cultural activities. It now houses the Museum of Maharaja Sawai Man Singh II and continues to be Jaipur’s royal family. There are several buildings, numerous courtyards, galleries, restaurants, and the Museum Trust offices in the palace complex.

Only 0.75 km from Hawa Mahal, The Govind Dev Ji Vaishnava temple is located in the Jaipur district in Rajasthan’s Indian state. In a complex called the City Palace. This temple is among the 7 Vrindavan Thakur temples, including Sri Radhavallabh Ji, Shri Bankey Bihari Ji, Shri Govind Dev Ji, and four others. The deity (Murti) image was brought here from Vrindavan by the founder of Jaipur, Raja Sawai Jai Singh II. According to common legend, Lord Krishna’s appearance in the temple looks just like Krishna’s form during his rebirth on Earth.

The Jaipur Zoo is 2 km from Hawa Mahal, in the city of Jaipur in India. The zoo opened in 1877 and is near the Museum of the Albert Hall and the Garden of Ram Nivas. It has two parts: one section for mammals and one for reptiles and birds, and almost 50 species of various birds and animals reside here from all over the world. The Gharial breeding farm, which is the fourth largest breeding farm in India, was founded in 1999. Within the zoo, which exhibits the wildlife of Rajasthan, they also established a museum. And it is good to know that they created the Jaipur Zoo Under the Wild Life Protection Act, and so the zoo’s primary goal is to complement the national initiative to protect wildlife. 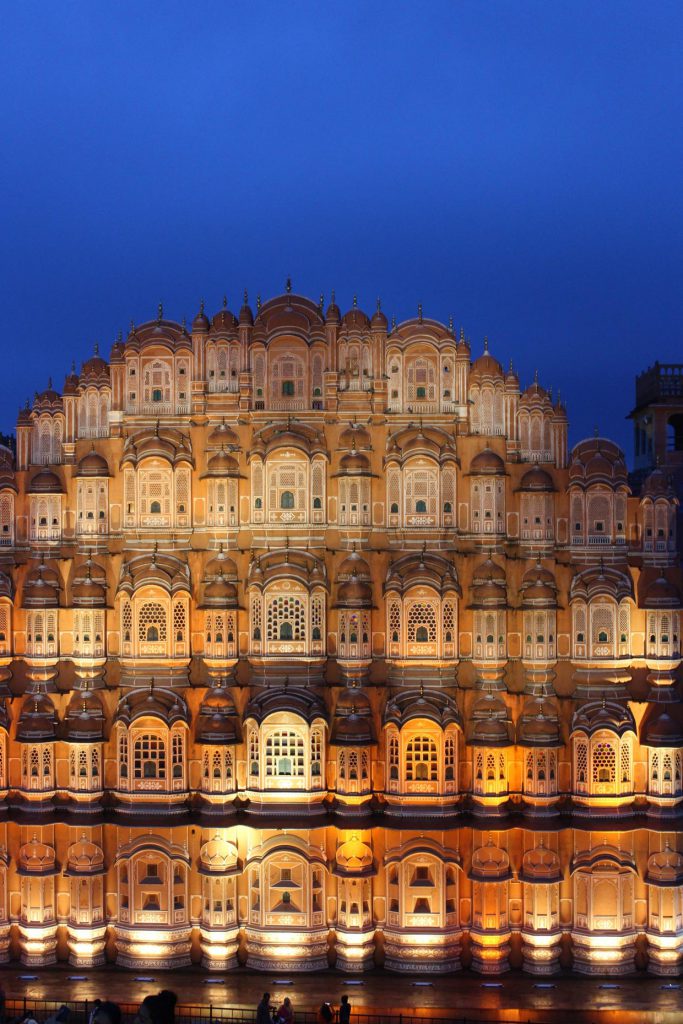 It is among the most popular budget hotels in Jaipur for both business travelers and tourists seeking a comfortable stay. This hotel provides contemporary rooms with modern facilities, including a flat-screen TV, air conditioning, and an attached hot and cold water bathroom. Also, room service, 24-hour CCTV monitoring for optimum security, round-the-clock power backup, and free Wi-Fi connectivity is available. At the front desk, skilled and hospitable staff are always ready to help. This hotel also provides convenient access to the airport, train station, major business centers, major markets, and popular tourist attractions, such as Hawa Mahal and City Palace.

The Royal CM Plaza in Jaipur is well known for its modern, clean, and hygienic rooms. Each room provides many amenities such as; an air conditioner, TV, tea/coffee maker, a minibar, a kitchenette, and a bathroom with free toiletries. You can also use the Royal CM plaza’s banquet hall or conference facilities for corporate events; this hotel also has complimentary Wi-Fi to stay connected and a travel desk for city tours. It is close to Hawa Mahal, and also there is a good restaurant in the plaza with friendly staff to make your stay more enjoyable. The Royal CM Plaza is on Bhaskar Marg, Sindhi Colony in the Bani Park area. It is an easily accessible location near Jaipur Junction Railway Station and metro station, which are just 1.5 km from the hotel. Jaipur International Airport is also only a 30-minute drive.

Located close to the main shopping center and historical monuments, such as Hawa Mahal, Jai Mahal Palace is ideal for exploring Jaipur’s fascinating city. This majestic palace, a vast complex of regal rooms, beautiful pavilions, and fantastic colonnades set in the 18 acres of gardens, dates back to 1745. The heritage palace has been exceptionally restored and recently renovated to offer guests the fantastic experience of a royal lifestyle complemented by legendary Taj hospitality.

However, despite its historical setting, be rest assured that the rooms in this palace offer a variety of modern amenities and friendly staff, to make your stay satisfactory. 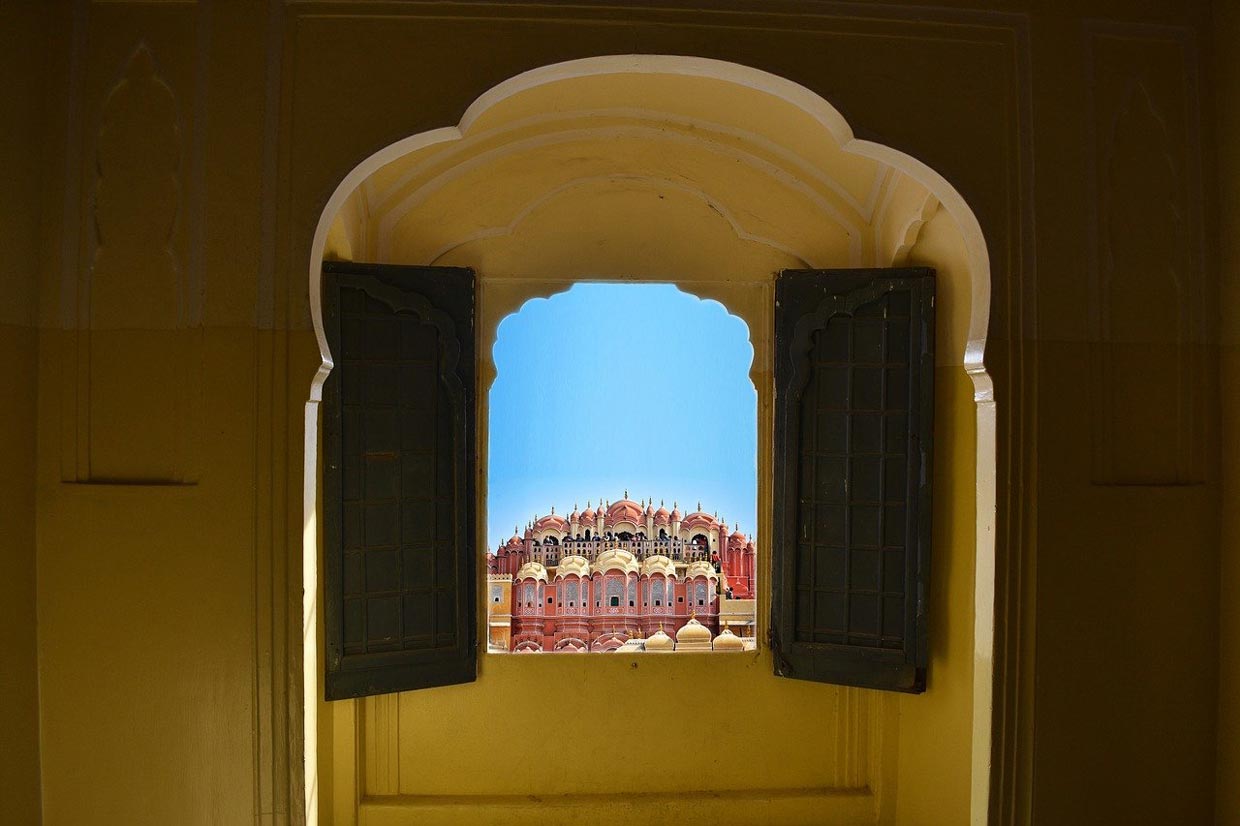 Hawa Mahal can not be described only by words. You need to have a direct encounter with all the beauties of this part of the land to fully understand everything. Many experiences have a feeling that varies from one person to another; we can guess how fantastic there is. If you have ever been to Hawa Mahal, let us know about your journey.