Canton Tower or Guangzhou TV Tower (aka Supermodel) is an iconic radio and TV tower in the Haizhu District of Guangzhou, China.

Established in 2010, Canton Tower is among the tallest towers in the world with a total height of 600 meters (1,968 feet).  It is located in Guangzhou at the intersection of Pearl River and Guangzhou New City Central Axes. Canton Tower directly faces Haixinsha Island, where the 16th Asian Games opening and closing ceremonies were held.

The Canton Tower, also known as Guangzhou TV Astronomical and Sightseeing Tower, features a unique shape and design bringing a more beautiful scene for Guangzhou and the famous Pearl River. The Canton Tower resembles a fine standing lady, trying to charm you with her narrow waist. This design has made photographers be more creative as the pictures they take, can look different from each angle.

The tower has a vertical free fall inside called Sky Drop on its top for adrenaline lovers. The revolving restaurant of the tower is the tallest in the world situated on the 106th floor at the height of around 420 meters (1,387 feet). 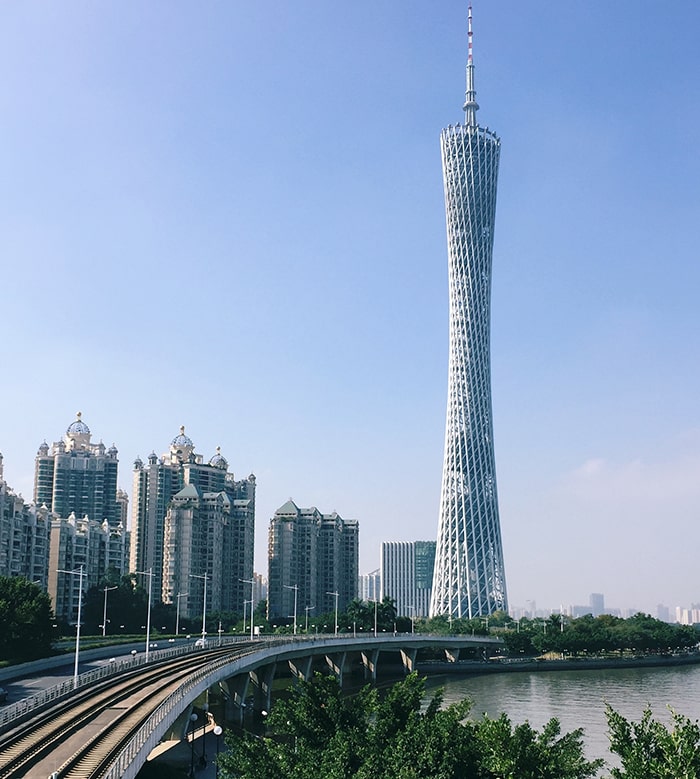 This 600 meters (1,968 feet) tower is the second tallest tower in China after the Shanghai Tower. 450 meters (1,476 feet) of total high is the main body, and the other 150 meters (492 feet) is the antenna on its top. The distinctive design alongside the tall height of Canton Tower has made it a unique global structure. 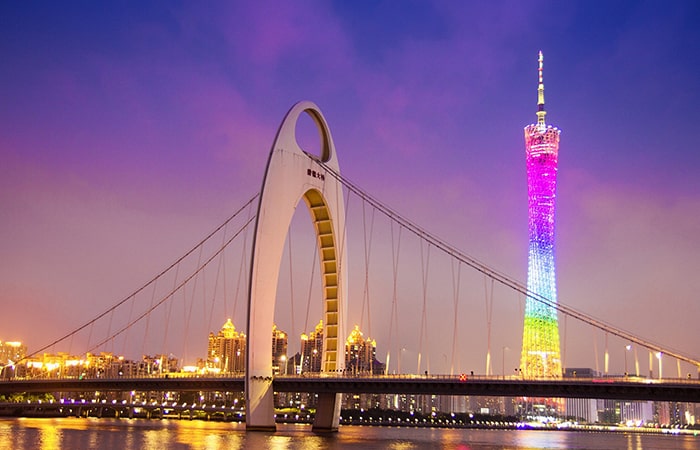 Added to wishlistRemoved from wishlist 0
Add to compare
From: $2,977.00

Guangzhou Canton Tower As a New Landmark in Guangzhou

Canton Tower is divided into five zones, named A, B, C, D, and E. These names are based on the height of the tower where Zone A is the lowest, and Zone E is the highest. In each zone of the Canton Tower, there are different entertainments available for the visitors to have an interesting experience. Let’s check what each zone has for the visitors, starting from top to the bottom of Canton Tower.

This is the highest portion of Canton Tower, and many of the entertaining areas are located here. This Zone starts from 376 meters (1,233 feet) and includes the antenna of the tower as well.

This is the second-highest outdoor observation deck of the world according to the Guinness World Records. This observation deck is situated at a height of 488 meters (1,601 feet). Here, visitors can enjoy a panoramic view of Guangzhou.

488 Look Out is the place for photography enthusiasts to take wonderful photos of moonlight, the starry sky, panoramic view of Guangzhou, and the sunrise.

This is something not suitable for everyone! It’s a 30 meters (100 foot) freefall from 485 meters (1,591 feet). The Sky Drop is an exhilarating experience as one of the highest vertical freefalls in the world. If you are ready to experience this thrilling free fall, you have two options; one is a Sitting Drop, and the other is a Standing Drop.

If you love to go around in that height without Sky Drop, then Bubble Tram is what you need. This is one of the most popular activities of Canton Tower with 16 crystal sightseeing cabins that revolve around the tower top part at the height of 455 meters (1,492 feet). The panoramic city view that Bubble Tram offers is unique and romantic. 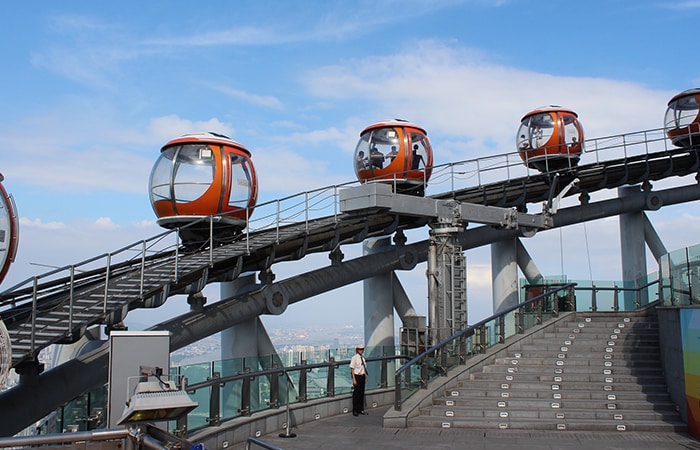 Engineering Marvel Tour Hall is located at Canton Tower’s 109th and 110th floors and its function is to protect the tower from earthquakes and hurricanes. 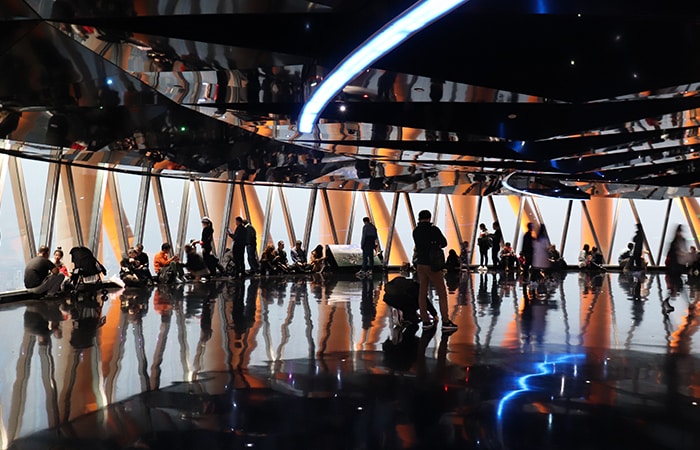 The Spider Walk is located around the narrowest part of the Canton Tower and climbing it can be a once-in-a-lifetime experience if you are up to the task.

Situated between 84 and 116 meters and (275 – 380 feet), Zone B is mostly famed for the video shows it has. There is a huge futuristic 4D cinema here from the 17th to the 22nd floor. Besides the 4D cinema, there are also two 3D screening halls that have the capacity of over 270 guests. These cinemas are equipped with the state of the art facilities and can be an excellent choice when visiting the Canton Tower.

Zone A has the lowest height between all zones starting from the ground floor to 32 meters (105 feet). Adjacent to the Pearl River, you will find the Outdoor Plaza. On its second floor, you can enjoy panoramic views of the Pearl River and take magnificent pictures of its beautiful scenery.

Here you can find the Riverside Café and the Chopstix Restaurant to enjoy a meal of your choice, either western-style food or traditional Cantonese. There is also a large banquet hall to have wedding ceremonies or other affairs. Besides, you can gift shops to buy souvenirs to remember your visit to the Canton Tower. 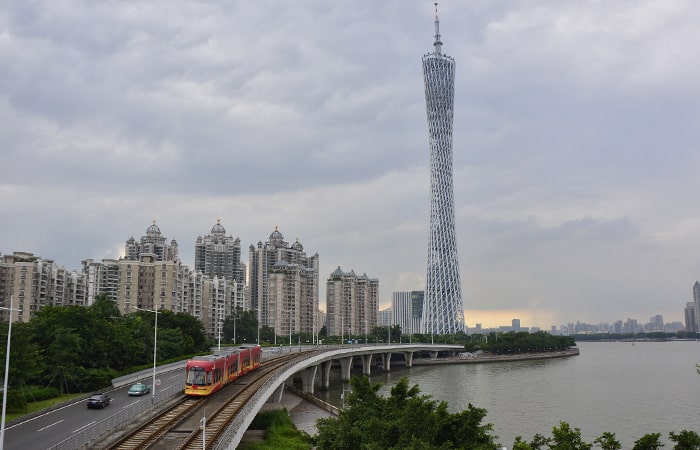 Metro Line 3 can help you to reach Canton Tower Station

Bus No.121a, 121, 204, 262, and tour line 2, can help you to reach Zhujiang Dijingyuan Station. You should walk in the direction of Yiyuan East Road to find the Easy Square of the Tower.

Tram lines 4 & 8 in Wanshengwei Metro Station can help you to reach the Canton River.

It is interesting that the designer of Canton Tower, Mark Hemel, was inspired by the hip joint bone of women; then he added a twist in the design. The twist resembles a beautiful lady twisting her waist while looking behind! Do you have any more information to share? Don’t forget to leave your comments and thoughts with us. Also, if you have any questions about the Canton Tower and its attractions, rest assured that our professional guides will reply to you as soon as possible.

In This Article
Canton Tower, General Information
Canton Tower Height
Guangzhou Canton Tower As a New Landmark in Guangzhou
Different Sections of Canton Tower
Zone E
Zone D, The Spider Walk
Zone C
Zone B
Zone A
How to get to?
By Metro
By Bus
By Tram
Ticket Prices
Single Tickets
Combination Tickets