Formerly called Masjid-al-Sultan Muhammad Thakurufaanu Al Auzam, The Grand Friday Mosque is the most famous and the largest mosque in the Maldives located in the capital city of Male, with fantastic Islamic Architecture.

The distinct architectural artwork and the Islamic Center in the Maldives, The Grand Friday Mosque is an outstanding attraction in Male, gathering visitors by its towering golden dome. It’s the largest mosque of the Maldives and the stunning sign of simple architecture welcoming Muslim travelers and architect lovers throughout the year. Free from decoration, the Grand Friday Mosque is famous for its plainness and its golden dome dominating the skyline of Male. Don’t miss out on the splendid view of the sea this elegant mosque offers. (Photo by David Stanley via Flickr)

Where is the Grand Friday Mosque?

This impressive modern mosque, constructed in 1984 with the aid of the Gulf States, Brunei, Malaysia, and Pakistan, is among the largest South Asian mosques and contains over 5000 people. The Grand Friday Mosque is an attraction at the Male’s center situated next to the main jetty of Male. The white marble symbol of the city is the largest mosque in the Maldives named after Sultan Muhammad Thakurufaanu Al Auzam, one of the most celebrated Maldivian heroes.

What to See in the Grand Friday Mosque?

The Grand Friday Mosque is of great cultural and religious significance to the city, where you’ll be astonished by decadent chandeliers, intricate carvings, historical grandeur, and hand-woven carpets. The golden symbol of the island is simply constructed in plain white marble towers, the Jumhooree Maidan, the main square of the city.

Unlike the exterior, the interior is covered in wooden carvings, Arabic Calligraphy walls, and detailed designs with carpets from around the world spread wide on the floor. In addition to this unique mosque, this Islamic Center consists of some conference halls and an Islamic Library. 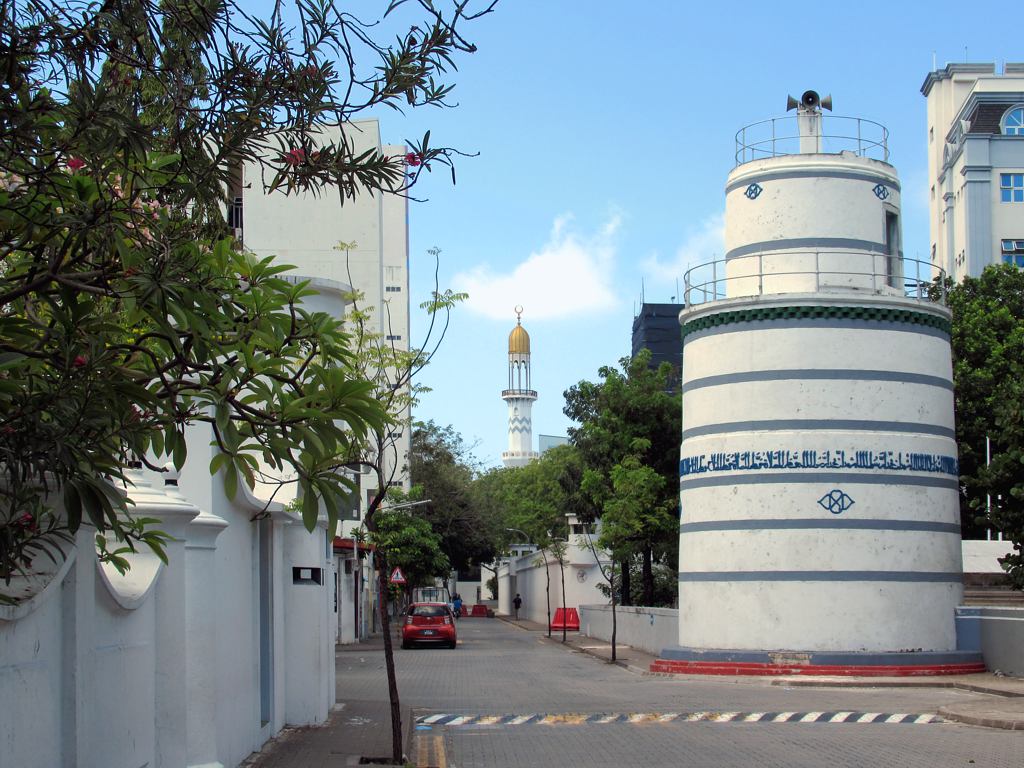 Like any other religious place, the Grand Friday Mosque requires pilgrims and tourists to dress respectfully. Make sure your shoulders and legs are covered entering the mosque. Long pants for men and long dresses or skirts for women are accepted. The main hall can accommodate over 5000 worshippers.

How to Get there?

You can get to this architectural pride by bus at the Fantasy Bus line 101, or you can take a walk from the main jetty of Male City.

The best time to visit this grandeur place is before noon and between 2 pm and 3 pm. 15 minutes before prayers, the doors close to all non-Muslims for the following hour. Tourists are only allowed to visit outside the prayer times between 9 am and 5 pm.