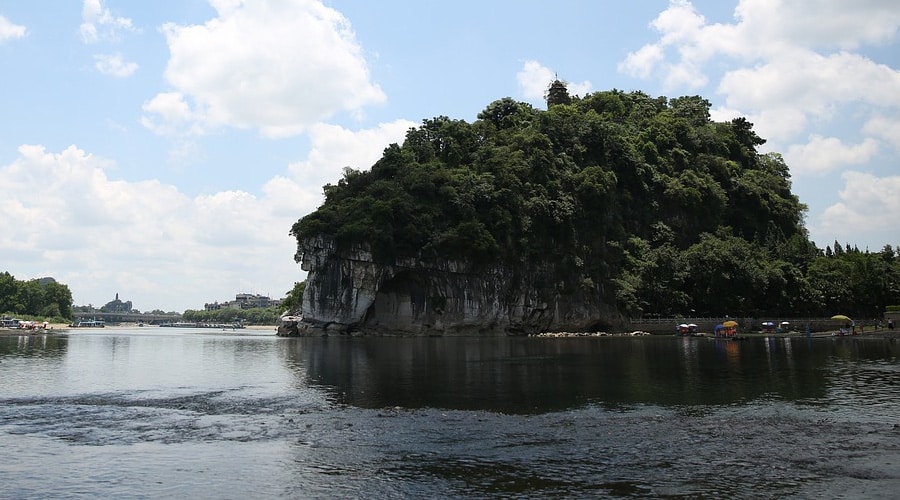 Located on the bank of the Li River, the Elephant Trunk Hill is one of the four top landmarks in Guilin, resembling an elephant drinking water with its trunk.
December 4, 2022

Elephant Trunk Hill is a natural karst attraction located in the Guangxi Zhuang Autonomous Region of Guilin, where the Li River and the Taohua River converge. This hill stands 656 feet (200 meters) above sea level and you can find different boats around it including bamboo that would take you closer to the hill. It has been the symbol of Guilin for a long time and if you watch the hill from the side, it looks like a giant elephant drinking water with its trunk from the river; therefore, it’s called Elephanta Trunk Hill.

Elephant Trunk Hill has been an attraction in Guilin for a long time; therefore, there are many tales about it.

Elephant of Emperor of Heaven

One of the tales is about how Elephant Trunk Hill came into existence. The tale is about ancient times when an elephant was belonging to the Emperor of Heaven. One day the elephant comes down from heaven to earth to help the people with their work.

When the Emperor of Heaven realized it, he became very angry; therefore, when the elephant was drinking water, the Emperor stabbed it and the elephant changed into stone on the water forever.

The God of Elephant

There is another popular tale about the Elephant Trunk Hill. This tale is about seven traveling fairies that descend from heaven to visit the beauties of the earth.

The youngest fairies saw that because of the floods, the people living along the Li Jiang River were going to be starved. This really touched her and she took pity on them.

She returned to earth but this time she also brought The God of Elephant of the Jade Emperor to help people but the Emperor found out and became angry. He then ordered his celestial general to return the fairy.

The God of the Elephant never had the chance to go back because of the sword stick on its back and it became the Elephant Trunk Hill.

Samantabhadra Bodhisattva and The God of Elephant

To keep The God of the Elephant in his place, Samantabhadra Bodhisattva put his magical vase on its back. According to legends, this vase later became the Puxian Pagoda which resembles the handle of the sword in some tales.

After a long time, when Samantabhadra Bodhisattva was passing from that area again, he decided to free The God of Elephant but he had already become a hill, and therefore, could not return to the Heaven Palace.

Samantabhadra Bodhisattva looked the area around and understood no one resides there because The God of the Elephant had disrupted the flow of the water and it was so dirty to be used by men or animals.

He also noticed this happened because there were not any stones at the bottom of the river and the soil could not set. Witnessing this, Samantabhadra Bodhisattva turned his white elephant into a golden stone and put it in the river. After this, the water miraculously became crystal clear and many of the residents returned to the banks of the Li Jiang River and stayed there.

The People were so touched by The God of the Elephant, they named the hill, The Elephant Hill or Elephant Trunk Hill. 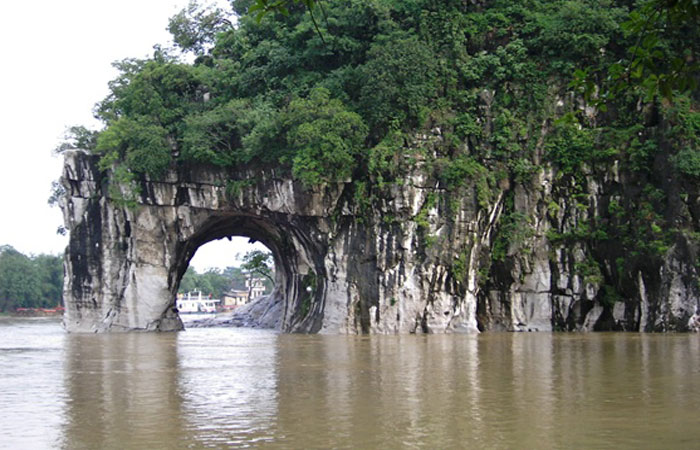 Attractions of the hill

In reality, this building was erected during the Ming Dynasty (1368-1644) and has been considered as the handle of the sword that killed the elephant.

The Moon over Water

The Moon over Water cave is located between the body and the trunk of the elephant. It has been a source of inspiration for poets and writers from ancient times till now and you can find these engraved on its walls, especially poems of Lo You, Fan Chengda, etc. from different dynasties.

It was formed 12000 years ago when the earth’s crust uplifted. Due to this, the Li Jiang River started to shrink, which accelerated the creation of the round Moon over Water Cave. The floor of the cave is almost always filled with water that resembles a bright moon floating, so the name Moon over Water is still in use.

Yunfeng Temple is one of the most famous temples of Guilin located on the southwest slope of the hill. It used to be the living place of Monk Jianzhen, a famous monk of the Tang Dynasty era. This area used to be the frontline of a huge Chinese civil war called the Taiping Rebellion. On the second floor, there is an exhibition in which, you can find battle flags, weapons, and cannonballs.

This fantastic island is located on the north of the hill representing stunning scenery to enjoy nature and take photos. 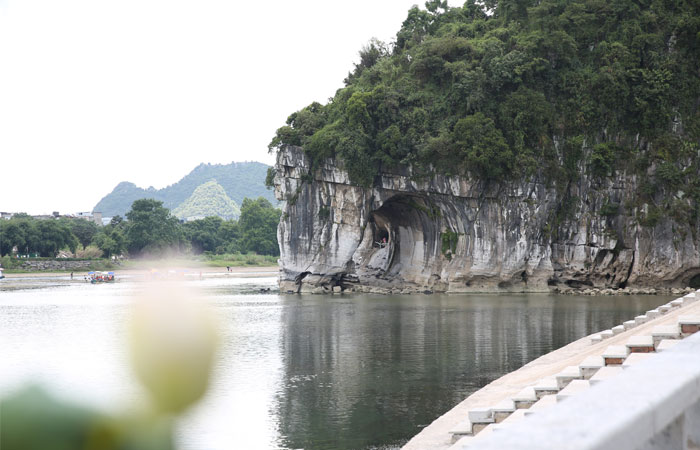 Besides the attractions, there is a show called “Legend of Elephant Hill Show”. Here, high-tech tools like hypermedia, lasers, and light are used at night to show the culture of Guilin using the body of the Elephant Trunk Hill as the projection screen. Primitive Guilin, Mysterious Village, Phantom Theater, and Legend of God Elephant are four sections of the show displaying the beauty of the Guilin as well as the living condition of local ancestors. Never forget to visit this attraction at the time of your accommodation in Guilin and share leave your comments and thoughts for us.