Dujiangyan City is located in the west of Chengdu City and has a distance of 48 kilometers from downtown. The city is well-known for its Dujiangyan Irrigation System or the Origin of the Land of Abundance.

Dujiangyan City is located in the west of Chengdu City with a distance of 48 km from downtown. The city is well-known for its Dujiangyan Irrigation System or the Origin of the Land of Abundance. (Photo by © marcoven via Flickr)

Weather and When to Go 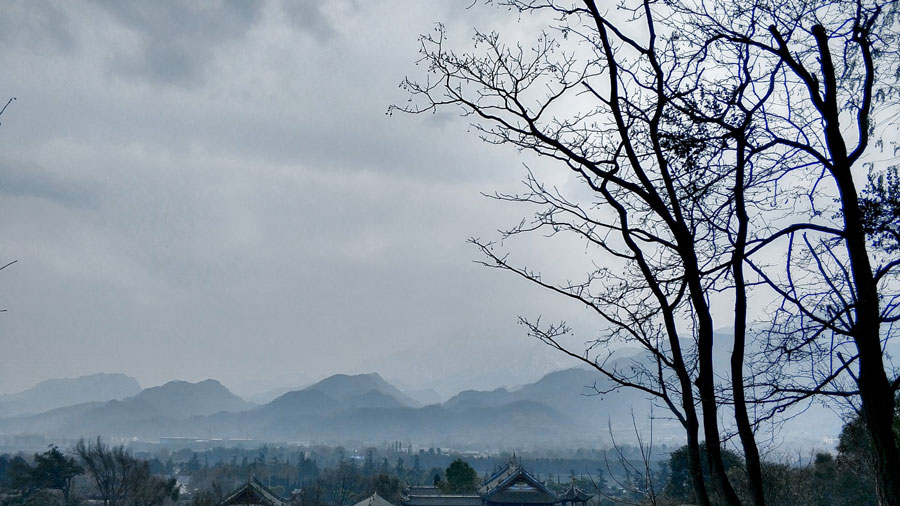 The city has different kinds of accommodations that the tourists can choose from. It has cheap hostels for the budget travelers and high-end hotels for those looking for a luxurious stay. Many of the accommodations are located on Jianshe Road, Dujiangyan Avenue, and Guan Jing Road. Prices of the hostels and hotels tend to increase as they become closer to the scenic sites and during peak times like summer and holidays.

Two of the World Heritage Sites are located in Dujiangyan called the Dujiangyan Irrigation System and Mount Qingcheng, a popular Taoism mountain of China.

Dujiangyan Giant Panda Base or Conservation and Research Center for the Giant Pandas (CCRCGP) is located in Shiqiao Village of Qingchengshan Town. It aims to improve the living condition and ecological protection of Pandas.

Added to wishlistRemoved from wishlist -1
Add to compare

Summer Resort is a popular place to visit during summer where locals and tourists can unwind and enjoy the heat.

The Confucius Temple in Dujiangyan is the only living temple in China where you can experience the traditional Six Arts (Rites, Music, Archery, Calligraphy, Mathematics, and Charioteering).

Jiezi Ancient Town was known as the home of Ladle Poet (Tang Qiu in The Tang Dynasty era). The town is also referred to as the “Back Garden of Mount Qingcheng” and “Hometown Orchid”.

Located in the Minjiang River of Dujiangyan City on the western part of the Chengdu Plain, Dujiangyan Irrigation System is 56 kilometers from Chengdu, the capital of the Sichuan province in China.

It is considered as the most successful technological achievement of old China because of its benefits for the city’s local people ever since it was built 2,300 years ago. Besides being an effective irrigation system, it also prevents the annual flooding of the Min River basin. In ancient times, the ancient Shu State became famous because of the irrigation system and was known as the “land of abundance”. It has been playing a vital role in the agricultural sector of the country and even survived the 2008 Wenchuan earthquake.

Regarded as the forerunner of the world conservancy culture, Dujiangyan Irrigation System was selected by UNESCO as a World Heritage Site in the year 2000. 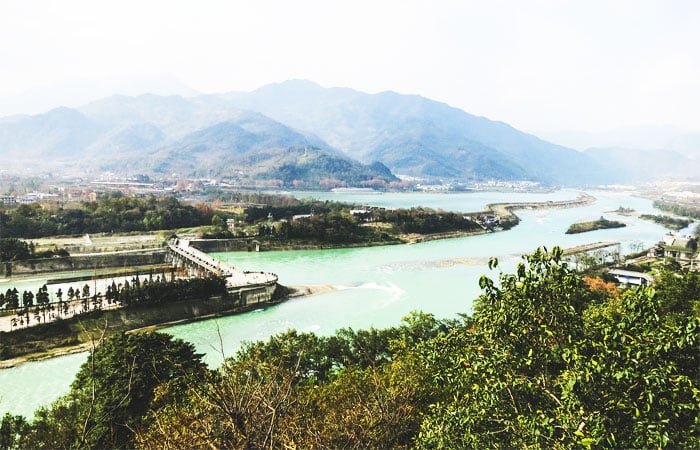 The Dujiangyan Irrigation System was designed and constructed in the middle of 200 B.C. It is one of the oldest and the only non-dam irrigation system across the world that is still operational until today.

More than 2,000 years ago, there were constant flooding in the region of Dujiangyan caused by the Minjiang River which is a tributary of the Yangtze River. To prevent the flooding without closing the waterway for the military vessels, a local official of Sichuan Province, Li Bing, together with his son, proposed the construction of an artificial levee. The levee will redirect a portion of the river’s flow and cut a canal through Mount Yulei. The excess water will then be discharged to the dry Chengdu Plain and beyond.

Li Bing received a budget from King Zhao of the Qin Dynasty and together with ten thousand men, completed the system after eight years of work and perseverance. Since then, the system prevented flooding in the city and made way for the progressive agricultural economy of China. 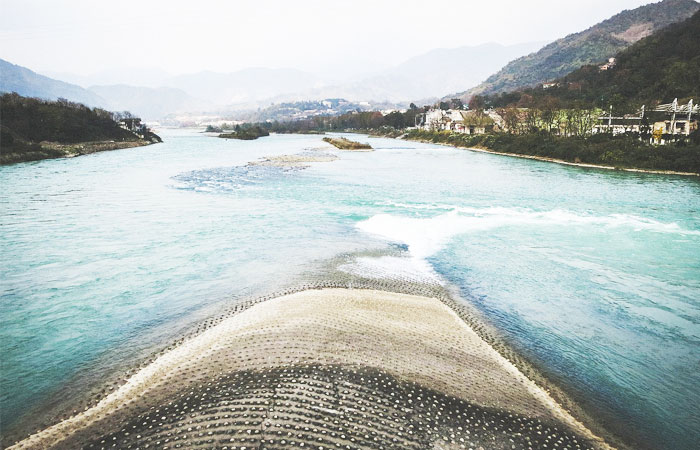 Yuzui is a water-dividing dike designed to divide the Ming River into two separate parts. The Outer River, which is the western part, is used to drain off the waters from the flood. On the other hand, the Inner River, located in the eastern part, is the one used for irrigation.

Feishayan is a flood discharge project, which was the key element that protects the Chengdu Plain from flooding. It mainly functions as a flood discharge as well as desilting and regulating the flow of the water. When there are overflows of water from the third project, Baopingkou, the excess water will overflow to Feishayan.

Baopingkou is a diversion project, which functions as a control valve. It can control the flow of the water in the Inner River automatically. It is a famous attraction since the old age due to its stunning natural scenery.

Located at the hillside on the right bank of Ming River, the Erwang Temple is used to commemorate the works done by Li Bing and his son for the irrigation system. In the current time, the sculptures of Li Bing and his son are found in the main hall of the temple and the stone wall of the temple was inscribed with different water control words that were passed down from the Qin Dynasty.

The Erwang Temple is composed of a temple in the western part and a garden in the eastern part. It has a total area of 50,000 m2 and an architectural area of 10,000 m2. Tourists can go to Erwang Temple to have a panoramic view of the whole Dujiangyan Irrigation System.

Located in the Lidui Park, Fulong Temple was built during the Jin Dynasty as a commemoration of the leader of Tianshi Taoism, Fan Changsheng, and later, Li Bing. The stone statue of Li Bing, which is carved during the Eastern Han Dynasty (25 – 220) and excavated from the river in 1974, is placed in the front hall of the temple. The best place to overlook the panoramic view of Feishayan, Yuzui, and Anlan Suspension Bridge is the lookout pavilion of Fulong Temple. 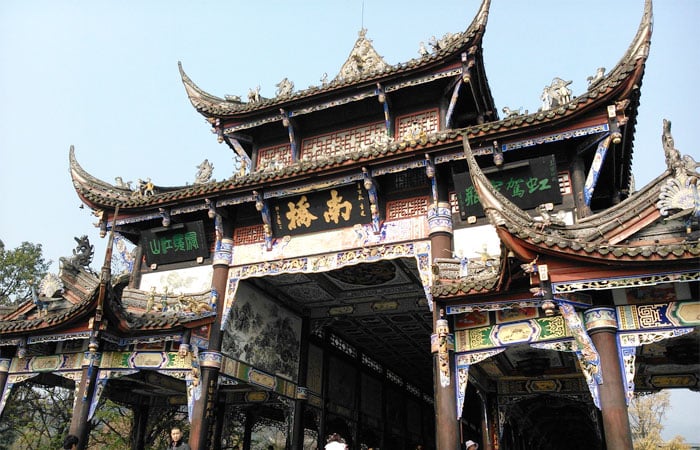 located on the east side of Erwang Temple, Yulei Mountain is covered by tall and lush ancient trees. One section of the mountain is where the ancient Great Wall of the Ming Dynasty is located. Locals usually come here to walk and do their morning exercises. A pavilion called Yulei Pavilion is located at the top of the mountain. It has a pseudo-classic architecture and a perfect view of the Dujiang Irrigation System and the whole of Dujiangyan City.

Anlan Suspension Bridge, which is one of the top five bridges in ancient China, is located in Yuzui and crossing the Inner and Outer Rivers. It was initially built during the Song Dynasty (960 – 1279) rebuilt in the year 1974. Many tourists are having fun swinging the bridge as they walk on it. It is also a great place where you can take photographs with stunning backgrounds.

The city has no airport but the closest one is the Chengdu Shuangliu International Airport located 70 km from the city. Tourists can ride a direct bus line from the airport to the Dujiangyan Bus Station. Travel time is approximately 1 hour and 3o minutes.

If you are coming from Chengdu, a faster way to go to Dujiangyan is to ride the bullet bus from Chengdu North Railway Station which can shorten the travel time to 30 to 50 minutes. On the other hand, buses in Chengdu Chadianzi Bus Station can take you to the city after an hour.

The city is quite small and the public buses often go to the different attractions located in Dujiangyan. Taxis can also be ridden when traveling around the city.

From April to October is the best time to visit Dujiangyan. Tourists can enjoy the city’s summer resort during summer, as well as its beer festival called Hongkou drifting held during summer nights. Visiting the irrigation system as well as Mount Qingcheng is possible even during the hottest times since they maintain cool weather all year round. Do you have any more information to add? Feel free to leave your comments and thoughts for us. Besides, if you need more information, be in touch with us with the help of the comment section and our professional guides will reply as soon as possible.