Delos – One of The Most Important Sites in Greece

Delos is one of the most famous Archaeology sites of Greece. As a Sacred island in ancient Greece, Delos is believed to be the birthplace of Apollo and Artemis. The earliest marks of inhabitants on this island date back to 3000 BC.

The archaeology site of Delos has been recorded by Unesco as a significant cultural heritage of all ages and was listed in the World Heritage Sites in 1990. As an island museum, Delos has an incredible amount of ancient Greek statues and other artifacts that have been found all around the island.

The Cyclades island chain consists of Islands like Mykonos, Naxos, Milos, Santorini, etc., which all are located around the holy island of Delos. Its reputation as a holy place and the birthplace of gods turned Delos into a place that attracted many visitors each year. This fame continued to grow until Byzantine times.

As a result, trading and commerce started to progress and by the 8th century BC. So, Delos became a developed commercial port in ancient Greece. It has been estimated that almost 750,000 tons of goods were commerce via Delos dock every year during the first century BC.

The first Archaeological research on the site was carried out by the Greek Archaeological Service in 1872. In 1873, The French School Of Athens continued the excavations. Today, Archaeologists and researchers are still digging the area and studying it. Another vital role of the archaeologists and officials is to protect this cultural heritage due to the increasing number of annual visitors to the island. 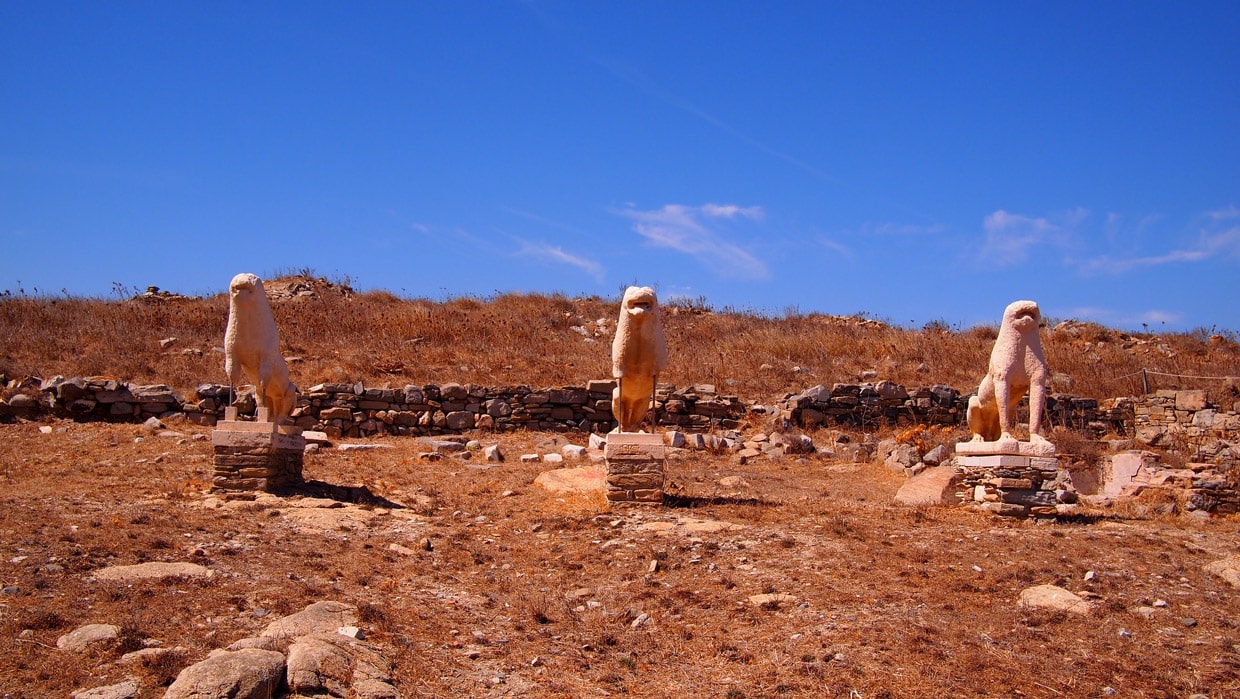 You can book guided tours in advance. There are several tours available in various languages which you can choose from. A great advantage of these tours is that when you get to the island, you do not have to waste your time waiting in a long queue in order to get the entrance ticket. First of all, these tours will show you the key hallmarks of the site and then take you to the museum and give you the chance to explore the area by yourself.

Later, you will have enough time to get back to the site and visit what else you desire. Also, the tours have a guide who is an expert in archaeology and issues of ancient Greek culture and art and will explain the main features of the area for you and introduce Delos’s history to you. 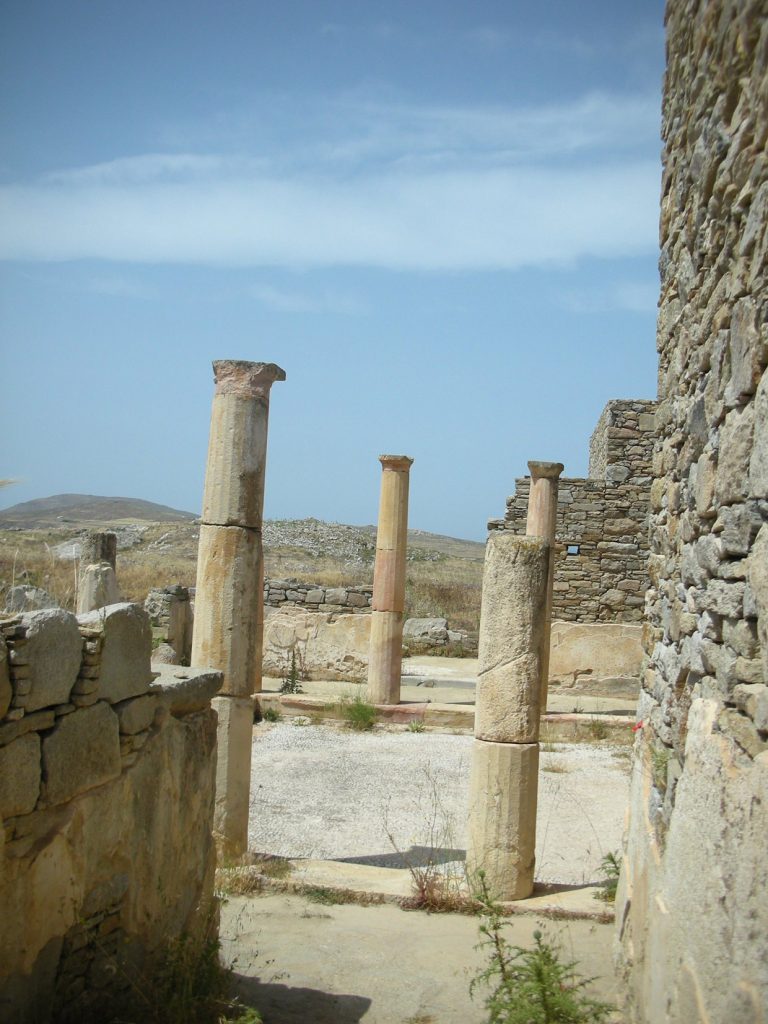 The Terrace of the Lions

The sculptures of lions are one of the main hallmarks of the island. They are located near the sacred lake, as the guardians of it. Although the original number of statues is estimated to be between 9 and 19, only five of them have remained today.

Those which are at the terrace right now are copies, and the original ones are secured inside the Archaeological Museum of Delos. It is interesting to know that In 1716 one of the sculptures was taken away by Venetians because it was similar to the lion of Saint Mark for them.

It is located in the southeast of the port and has a great collection of masterpieces like the Temple of Hera and the sanctums of Zeus Kynthios and Athena Kynthia.

It is widely believed that Sacred Lake was the place that Leto brought Apollo and Artemis into the world. It is now turned into a park-like place.

It was constructed between 296 and 240 BC; this theatre had a capacity of 6500 spectators in 40 queues. Unfortunately, not a lot of information is available about the main functions of these theaters. But, there are opinions, and it’s better to check them out when you want to visit them.

It is located next to the sanctuary of Apollo and, in comparison with the Apollo temple, is smaller. Only three columns remained of the whole building.

This temple is far smaller and older than the three other temples next to Apollo’s sanctuary. It was made in the 6th century BC, and since its building material was porous limestone, it was named Poros Temple.

It is also called the Great Temple of Apollo. This temple was the largest one in the god’s sanctum. Its building started in 478 BC.

This temple was made for the god Dionysus. Along with other remaining monuments, there is a half- rescued phallus on a stand in this temple.

This temple was made in the 5th-century BC, and There are still some columns remaining. But, unfortunately, it was one of those many temples that many of them are gone due to many incidents.

Temple of the Athenians

This temple was made in 417 BC and dedicated to Apollo. There are still some Doric columns left of it.

It was made in the 3rd century BC for the 12 main gods of the Greek pantheon.

Sanctum of the Syrian Gods

It was constructed in 150 BC for the Syrian gods Atargatis and Hadad, who were well-known in the Greek culture.

It was made for the first king of Delos, who is said to be the son of Apollo.

Temple of the Egyptian Gods

Isis and Serapis were worshipped in this temple.

Sports events were held here. It was a trendy event during those times as it is now.

It is located near the entry of the temple of Apollo.

This natural cave was a temple for Heracles, and before that, it is believed to be the first place where Apollo was worshipped on the island.

Nowadays, visitors dock at a port that is built upon a site of an old harbor. This harbor is located at the entry of the temple of Apollo.

It was built in the 2nd century BC. If you get the chance to see it, ask locals their opinion about it. They might give you misinformation, but the way they think about these places can help you clarify your imagination about these monuments.

The remains of a house with the decoration of mosaics illustrating Dionysus. The original house is secured in the museum.

This derelict house once belonged to a wealthy Athenian man and wife called Cleopatra and Dioscurides. The ruined sculptures of this couple still remain there.

The remnants of barricades were constructed by the Roman in 69 BC to defend the town.

It consists of valuable sculptures, pottery, and clays, statues, Jewelleries, and mosaics, found all around the island. Although there are a large variety of ancient remnants of the islands, still some of them are kept elsewhere, like the National Archaeological Museum of Athen.

It is worth to be mentioned that the museum has a collection of items from the Bronze Age, 3200-1050 BC, to the Ancient times in 1050 BC-AD 324. You can buy tickets there and visit the museum. 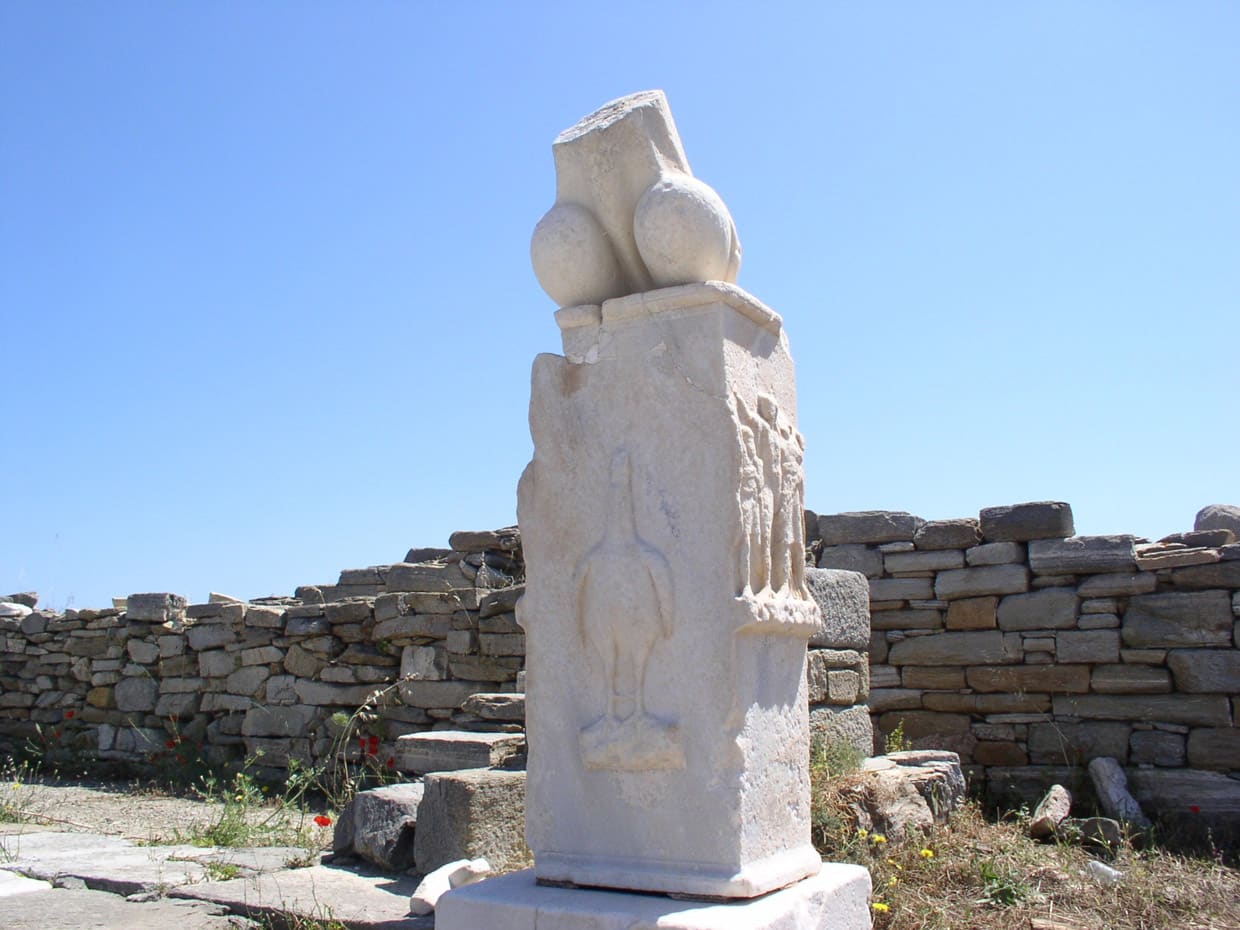 The whole of Delos is an ancient archaeology site, and you are only allowed to visit it during the day-hours. Staying overnight in Delos is forbidden, and you can not find any accommodation in the area. The only resort is designated for guards of the island and Archaeologists.

It is allowed to visit the island during the week except for Mondays when it is closed. You can sail there by boat or cruise vessels from nearby islands like Mykonos, Naxos, and Paros. If you are enthusiastic about visiting the whole site and do not want to lose anything, you should try to get there early in the morning. Here is extra information about how to get to the island from three different islands.

From Naxos to Delos

At 8.45 A.M., the boats leave the harbor of the Naxos town and sail to Delos. You will have about three hours to visit the site and its museum. Then you can sail to Mykonos, where you have another three hours to spend in the town. There you can continue your archaeological trip and visit the Mykonos Archaeology museum. The ticket you buy in Naxos includes a transfer from your accommodation and also the trip to Delos and Mykonos. By the way, you have to pay for guide books or maps and the entry to the archaeological site and museum.

From Paros to Delos

To sail to Delos, you should go to Parikia (the chief harbor of Paros). Then, if you want to have enough time to explore, get the ticket for 9.30 A.M. By doing so, you will have about three hours to visit the site and its museum.

Then you can sail to Mykonos, where you have another three hours to spend in the town. There you can continue your archaeological trip and visit the Mykonos Archaeology museum. The ticket you buy in Parikia includes a transfer from your accommodation and also the trip to Delos and Mykonos from Paros. Nevertheless, you have to pay for guide books or maps and the entry to the archaeological site and museum.

From Mykonos to Delos

Mykonos Old Port is the place where ferries depart from to get to Delos. You can not only buy tickets there in person, but also you can buy them online.

The Sustainable Copenhagen of the Future Private Bike Tour

2 Day to Zagora Desert from Marrakech