You can find antiquity in Damaraland, Namibia. San tales are recorded on a canvas of rock at Brandberg and carved on cave walls at Twyfelfontein. In contrast, the Petrified Forest is a mysterious area of fossilized trees dating back millions of years. Besides, you can walk into many tribes of Damaraland, where people are still living the way their ancestors did a long time ago.

Damaraland is located between Skeleton Coast and Etosha National Park in Namibia. This beautiful area, Namibia’s craziest and most spectacular set of landmarks, is the habitat of the country’s legendary desert elephants. This place has various impressive attractions that should not be ignored, and it is ideally situated for a visit.

Namibia is suitable for people who prefer to drive safaris themselves. Driving in easy-to-navigate gravel paths with no traffic and a low crime rate is what you can expect from this place.

Many of the really famous paths to Damaraland begin in Swakopmund, Namibia’s exploration center on the Atlantic coast. Southern Damaraland is quickly accessible by car on decent roads; however, as visitors head north, the area gets more inaccessible and tough.

Damaraland’s desert-adapted wildlife thrives in this extremely dry climate with little, if any, temporary water supplies. Through ages, a number of species have improved their adaptation to difficult living standards. Black rhinos, lions, desert-adapted elephants, antelopes, and kudus are among the species that travel long journeys in search of food and water. Moreover, Damaraland is home to over 200 species of birds. The important birds of Damaraland comprise the Lappet-faced vulture, Martial eagle, Red-billed spurfowl, and Pale chanting goshawk.

There are not many plants in this deserted area. They mostly include Damaraland’s endemic desert plants. Euphorbia Damarana, which is also known as Damara milk-bush, is one of them. Welwitschia mirabilis, with its strange look, is another famous plant in this area. You’ll probably notice them easily. 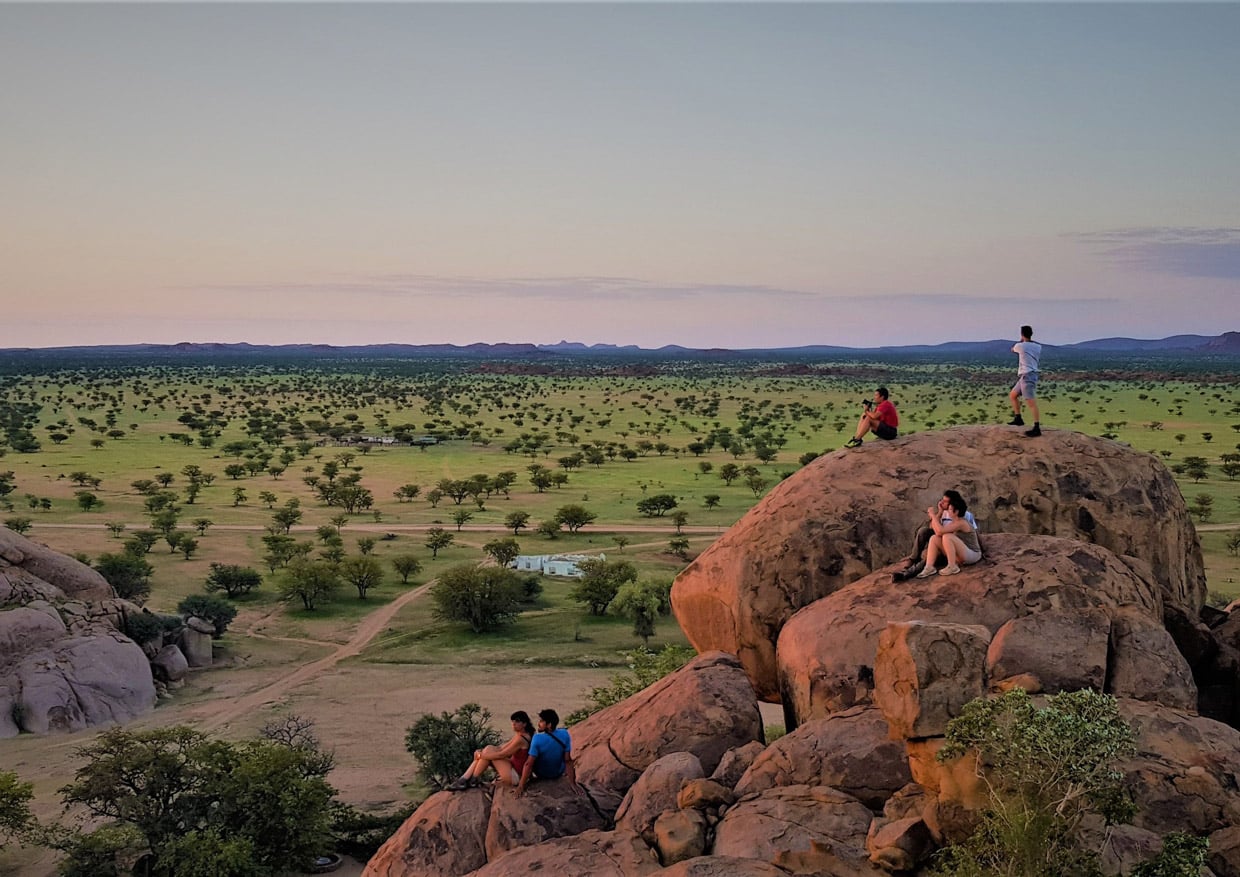 Besides visiting the amazing history behind the lands of Damaraland, you should definitely experience some extra activities. Drive a safari- driving a safari by yourself and in Namibia deserts is something that you won’t forget. Hiking and rock climbing are optional but don’t miss them if you have the equipment and are interested.

Birding and wildlife tracking: Damaraland is famous for its birds, Rhinos, Elephants, and other species. Observe these magnificent animals. Many tours, lodges, and camps offer wildlife watching programs.

As mentioned before, Damaraland is not only the ancient land of the San but also great formations. Here is a list of places that you should really visit in Damaraland.

Spitzkoppe goes up beyond the sandy plains of southern Damaraland and is among Namibia’s highly famed landmarks. The granite in the Spitzkoppe mountainous region is over 700 million years old. The mountain is about 1728m high and has been called the Matterhorn of Namibia, owing to its spectacular shape.

The major mountain, Gross Spitzkoppe, comprises multiple huge, unique peaks that are extended in various places around the region. Klein Spitzkoppe, Pondok Mountain, and the Inselbergs are the other peaks.

Many activities are available for you. There are local guides thereby paying a small amount of money, which give you an overall picture of the cultural site and some extra information. You can also try camping in this area and enjoy observing beautiful stars in the desert, alongside the sunrise and the sunset. You can hike the peak too, but it’s not recommended for everyone since it’s a bit dangerous. Spitzkoppe is a lovely place and should be included in everyone’s Namibia exploration. 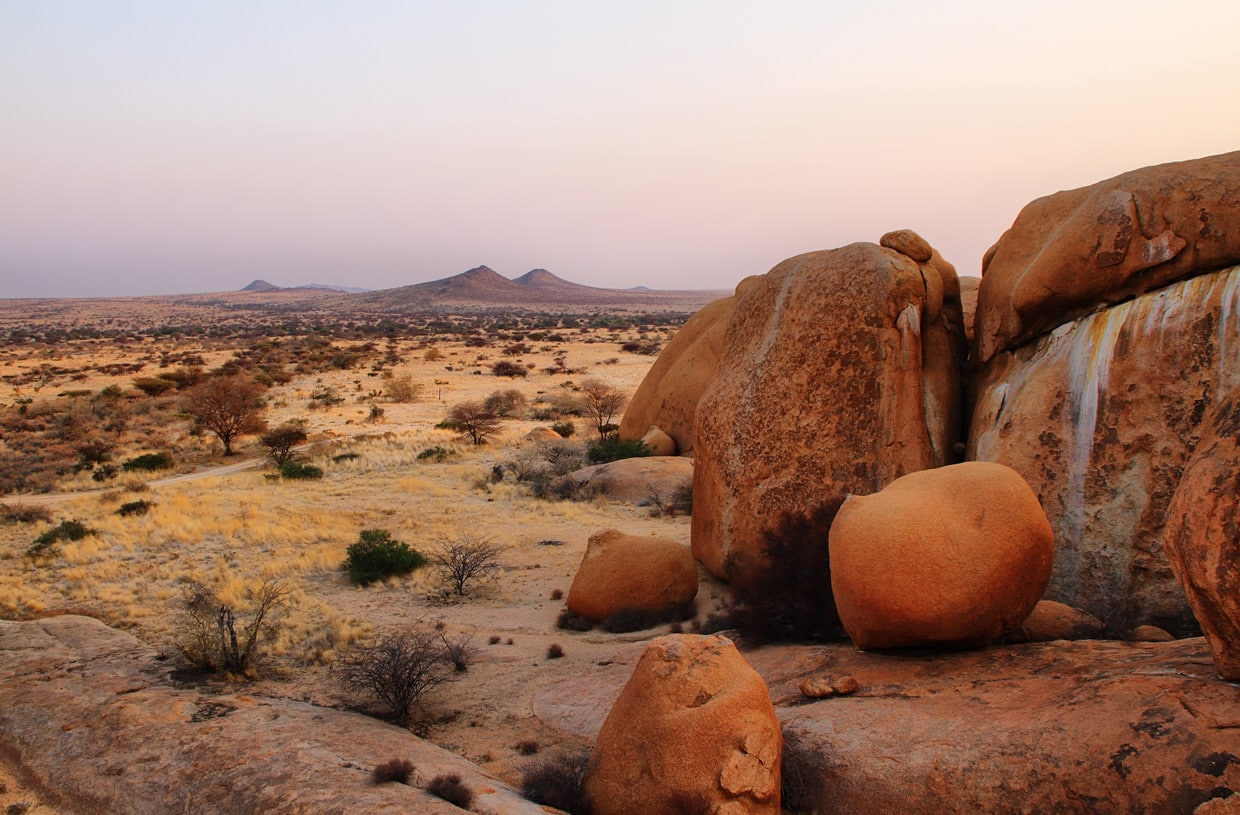 The Himba are semi-nomadic native people who live mostly in Namibia’s Damaraland area. The Himba tribe has been able to uphold its conservative culture by preventing too much foreign interference. It’s one of the very few native tribes in Namibia where people are living as their forefathers did generations ago.

They don’t act for tourists. With some luck, you may also be able to visit one of their villages. They usually leave their old villages and build new ones. You may also communicate with them if your tour guide is familiar with them. Don’t forget to buy their exceptional handmade souvenirs!

Twyfelfontein is home to one of Africa’s largest rock artworks. Twyfelfontein’s rock art carvings are the biggest and most significant in Africa, with over 2500 petroglyphs in various styles. There are a lot of animals, wildlife footprints, and abstract patterns here; however, You can’t observe much of human figures.

Elephants, rhinos, giraffes, and lions are among the animals portrayed in the carvings, but they are no longer present in the region. The San (a group of indigenous populations) formed these numerous rock illustrations and rock carvings with the help of no metal tools. Quartz devices are assumed to have been used alternatively.

In 1952, Twyfelfontein was classified as a national heritage. Twyfelfontein was outlined as a UNESCO World Heritage Site in 2007, the very first recognition of Namibia. After this recognition, more tours are available to this area. You can take a tour with local guides who will tell you about the carvings and the history behind them.

The Damara Living Museum is located approximately 10 kilometers north of the iconic Twyfelfontein rock carvings site. This is Namibia’s first conventional Damara plan, having opened in February 2010. There is no other place in Namibia or other societies where you can encounter traditional Damara culture like this.

There are two main plans for this living Museum. One of them is the traditional life in the village, and the other one is the Bushwalk. They have scheduled times, but you can stay with them more than that.

During the traditional life program, you will learn about the traditional blacksmith ( crafting weapons and tools), leather tanning (producing traditional dresses), jewelry, and other crafts. You will also see them proudly dancing, singing, and playing traditional games and their fire-making. We’re not finished yet!

Following the Bushwalk Program, you will accompany the natives on a Bushwalk. Walk with Women who Collect plants for the usage of making food, perfumes, and medicines. Meanwhile, men show how to build a trap or snare, telling you how their ancestors hunted animals during that time.

The highest point of Brandberg’s rock-art enchantment is Tsisab Ravine. The White Lady of the Brandberg, in Maack’s Shelter, is by far the most prominent figure in the ravine. The figure, who stands around 40cm tall, is part of a bigger painting portraying a peculiar hunting group. The figure seems to be holding a flower or perhaps a feather with one hand. On the other hand, the figure is holding a bow and arrows. Many scholars are also arguing whether the figure is a lady or a boy.

With its discovery in the early twentieth century, the artwork has sustained extensive damage. Hopefully, things are under control now. The area is now a protected heritage site in Namibia. Visitings are only available while you’re with an official guide. Note that you are not allowed to take any bottle or bag at the end of this area due to the protection system.

On the farmland of Ameib in Erongo, Phillipp’s cave was quite probable to be one of the San villages. The cave’s stone implements, which go back to 3500 BC, enhance this hypothesis. On the cave’s walls, there are different animals portrayed. There are also some sketches showing women and hunters. The iconic humpbacked white elephant painting is located in this cave, which is 15 meters deep and 35 meters long.

This place deserves a visit. You need to spend at least two hours walking through the cave and observing the paintings. Many recommend visiting the cave in the cool hours of the morning. Remember to wear comfortable shoes and bring some water with you. If you have time, you can visit the Bull’s Party after visiting the cave. This place is worth a visit.

The Petrified Forest was classified as a national monument on March 1, 1950, after two farmers found it in the 1940s. The Petrified Forest is located approximately 50 kilometers west of Khorixas. It isn’t really a forest that has turned to stone, so the title is a little confusing. It’s basically a 280-million-year-old assemblage of huge fossilized tree branches.

Researchers discovered that such trunks did not grow in modern-day Namibia but instead were flooded down a river in ancient times. The Gondwana region’s numerous Ice Ages finished. Maybe there was a massive storm that brought the trunks to their present position. 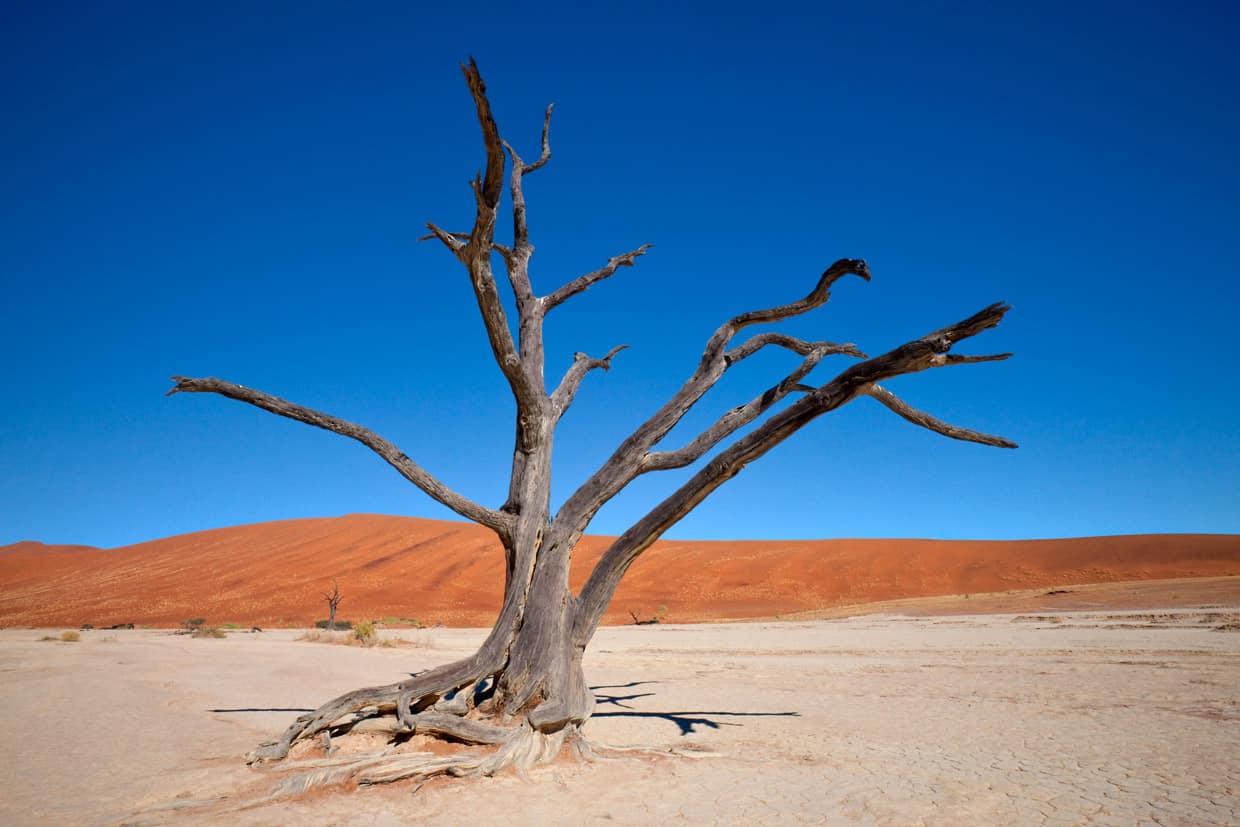 Visiting Damaraland with a group of other people and a professional tour leader would definitely improve your experience. You don’t really have to worry about the roads, where to stay, and how to handle things. Many available Tours in Damaraland, Namibia, offer excellent facilities like meals, Safari Vehicles, Camping equipment, and a good guide. Plus they will help you to communicate with the local people.

As we mentioned before, camping is one of the best things to do in Damaraland. There are many campsites in this area, with great views of nature and other facilities. If you prefer somewhere else, there are also some friendly lodges in this area. Most of them offer free parking sites, restaurants, and pools. Online booking is available for some of these lodges too. 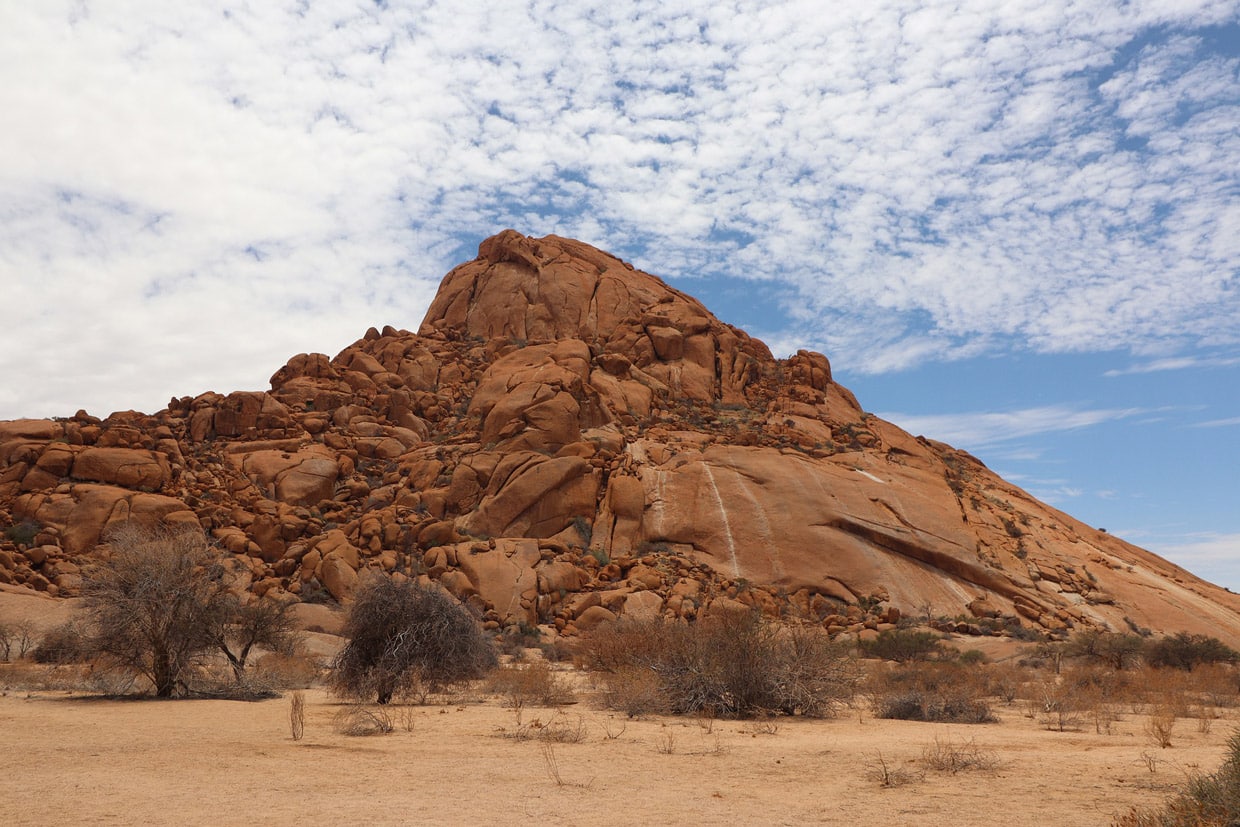 If you are visiting Damaraland for wildlife tracking, It’s better to choose the dry season. As May to October is the best time to visit, the prices are a bit more than other months of the year. The weather increases up to 25C; however, desert nights are still cold.

If you are traveling with an interest in birdwatching, November to April is the best time.

April and May are excellent. December, January, February, and March are hot. Humidity is high, and storms are expected.

Into The Amazon Rainforest Tour 5Days/4Nigths