Cu Chi Tunnels are a huge connected network of tunnels in Ho Chi Minh City dug by communist forces under the jungle area of Southern Vietnam in the late 1940s.

Cu Chi Tunnels in Ho Chi Minh province is what remains of many years of conflict in Vietnam, and is currently the top attraction for dark tourism. They tell the grim story of how people defended their land and give their lives in this endeavor. They were dug by the Viet Cong soldiers for several kilometers and were expanded as the wars waged on. (Photo by Chris Sammis via Flickr )

What remains of these war-time hiding spots has now become a massive museum in Saigon. They are restored and well preserved to educate the visitors about the life of people under the ground while they fought French colonists and U.S. troops. Today, most of the Cu Chi Tunnels walls are widened and cemented for the travelers to move easier in vast underground networks. You can now enter these tunnels to discover how the Communist guerrilla troops or the Viet Cong used to live, what they ate in extremely harsh conditions.

History of the Cu Chi Tunnels

The Cu Chi Tunnels were dug in two periods for two wars. Each stage had its own advantages for the Viet Cong or the VC troops. During their first use, they went on for kilometers but were rarely connected and held so many troops.

Small areas under the soil were dug by hand and primitive tools to hold off the French troops in the 1940s. During this time, they were not essential for the survival of the VC troops, but they gave a huge advantage over the enemy. They proved useful against the enemy as a means of sending troops behind enemy soldiers or surprising them at night. They were also very useful in transporting supplies without the French troops noticing.

The Expansions of Cu Chi Tunnels in the 1960s

By the time of the French evacuations, the country was divided into two parts. The north was controlled by communists and the south, which had a non-communist Vietnamese regime and was also occupied by the forces of the United States. The wars between north and south escalated quickly and therefore the Cu Chi Tunnels needed expansions.

The several small tunnel networks were now connected and extended to several hundred kilometers. The Viet Cong made their HQ in the same networks and began training troops and living in these underground systems. The people and troops living there would only have to come out from time to time for food and supplies. This way of life meant they had to stay hidden for several hours and even days at a time.

Life was very difficult under the ground, not just because of the lack of food and drinking water. There were shortages of air despite the many air filtration systems they had used. To make things worse, dangerous animals and insects also took a liking to these tunnels and made it their home. Tens of thousands of Vietnamese men and women lived and fought in this harsh environment to protect their land and ideals. It is also said that about 50,000 of these people died in these very same tunnels.

The U.S. military began bombing the area of Ho Chi Minh province that was known as Saigon back then. The bombings proved ineffective against the tunnels because many of them were dug several stories below the surface. Small groups of American troops known as the “tunnel rats” began training and entering the tunnels in search of the VC troops. Their search proved ineffective as the tunnels were huge and filled with traps.

In January 1966, an operation known as Operation Crimp took place in the area. This operation included bombing the area with B-52 bombers and then sending 8000 soldiers to comb the area. This operation was more successful but as a whole, it was another defeat since all they had found was radio equipment, weapons, supplies, and the fact that the Cu Chi Tunnels were much larger than anticipated.

Later on, in 1969, another operation took place called Operation Cedar Falls. This time the American forces started carpet bombing the province before sending in 30,000 troops. This operation was more effective in destroying more sections of the tunnels and revealing several others, but it was still not enough. The CV forces kept on fighting until 1972 when the U.S. removed their troops in frustration. By the year 1975, the war ended with the defeat of the southern Vietnam forces. 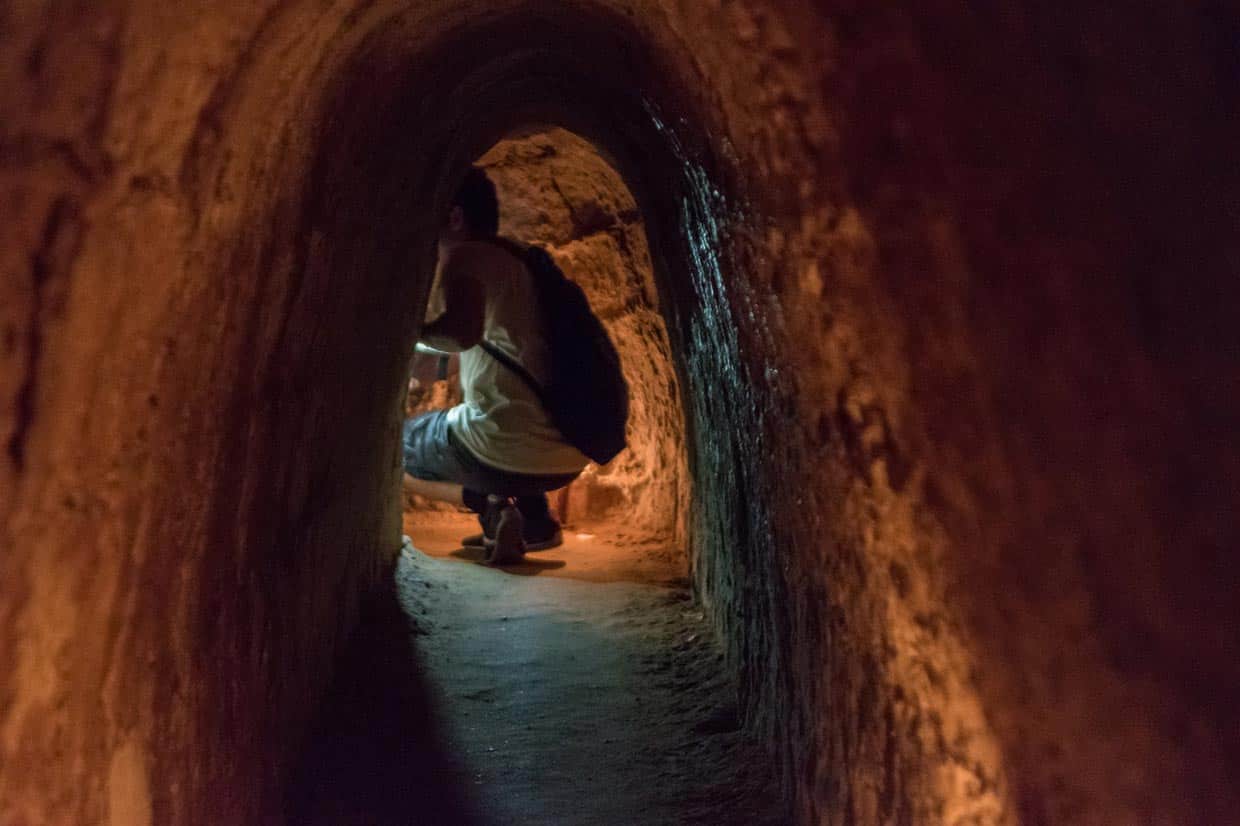 The Cu Chi Tunnels that remained were restored and repaired by the government to become a dark tourisms destination in Ho Chi Minh province. When you visit the museum, you can see short videos about how the tunnels used to be and how significant they were in the war. The expanded and restored areas are suitable for tourists to visit and explore but they are still unsuitable for some people. You still need to crawl inside most areas, and the shortage of air may bother you, therefore it is not suggested for everyone.

The best way to visit Cu Chi Tunnels is to explore the area from above the ground first and then enter the tunnels. As of today, there are emergency exit points every ten meters for safety reasons. Besides entering the tunnels, you can go to the firing range and fire with one of the weapons used during the Vietnam War. The firing range is a little away from the Cu Chi Tunnel Complex, but you can take a motorbike there instead of walking. The prices for firing at the range vary depending on the gun and how many bullets you want to fire. The prices begin at about 60000 VND with a minimum of 10 bullets to shoot.

It is not necessary to have your own guide as there are audio guides in English, but it is still much better to have someone to show you all the best places. 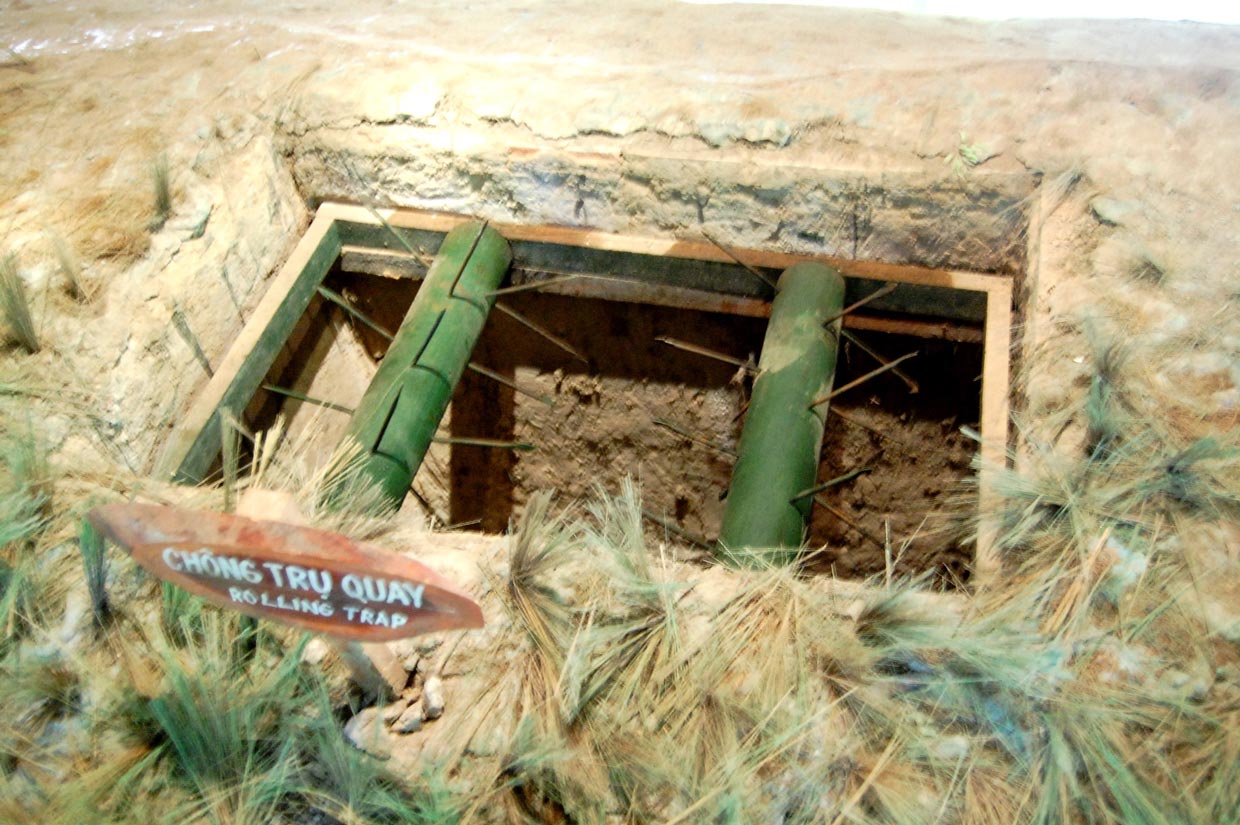 The cheapest and easiest way of getting there from Ho Chi Minh city is going by bus. Alternatively, you can take a taxi to get there faster and more comfortably. It is also possible to rent motorbikes or go on a speedboat tour, which can take you to Cu Chi.

You need to head to the Central Bus Terminal located at 23-9 Park, District 1, you can get on a bus to Cu Chi Station. From there, you must take bus 79 to the Ben Duoc Tunnel. The first bust will cost 7000 VND, and the second ride will be 6000 VND. This method may take about 2 hours and a little bit of walking.

Be careful not to miss the last bus as it will depart from Ben Duoc at 05:30 p.m.

It will cost a lot more than the bus ride but still not too expensive. You will have to pay about 600,000 VND for a one-way trip. Alternatively, you can install the Grab app and book your ride from inside the app.