Corfu in Greece – The Lovely Island in the Ionian Sea

Corfu, due to its strategic position, was always exposed to attacks and wars. In the ancient era, it was under the domination of Byzantine and always attacked by the pirates. Between 14th to 18th centuries, Corfu was under the rule of the Venetians and repelled Ottoman attacks three times, and they never could occupy this island; then Napoleon seized Corfu, and after that was attacked by England and was occupied for a while, and then it became a part of Greece. This history has led to a wide variety of different works and monuments in Corfu.

Corfu is a Greek island that is located in the Ionian Sea, with several satellite islands. Corfu or Kérkyra in Greece language is around 600 km square and is in the northwest of Greece and is one of the most attractive tourist destinations of it. You, as a tourist, can find there everything you want. This island is between Greece and Italy, so its port was important for trading among different countries.

The Best Time to Visit Corfu

The good news is that you can enjoy traveling the lands with a Mediterranean climate like Corfu, each time you prefer. It depends on your trip plans. If your main plan is to enjoy seashores and swim in the sea, you have to choose warmer months and be aware that seashores will be too crowded by sunbathers.

You have to reserve a hotel room at least one month before your trip. Early winter is chilly for swimming but ideal for enjoying nature and hiking. But if you want to swim but prevent crowded shores, choose early fall. At this time, the shores are not crowded, but the weather is warm yet. The winter in Corfu means raining and raining. If you choose to travel this season, don’t forget to have an umbrella and suitable clothing.

The below are the average temperatures on Corfu.

Added to wishlistRemoved from wishlist 0
Add to compare
From: $59.00 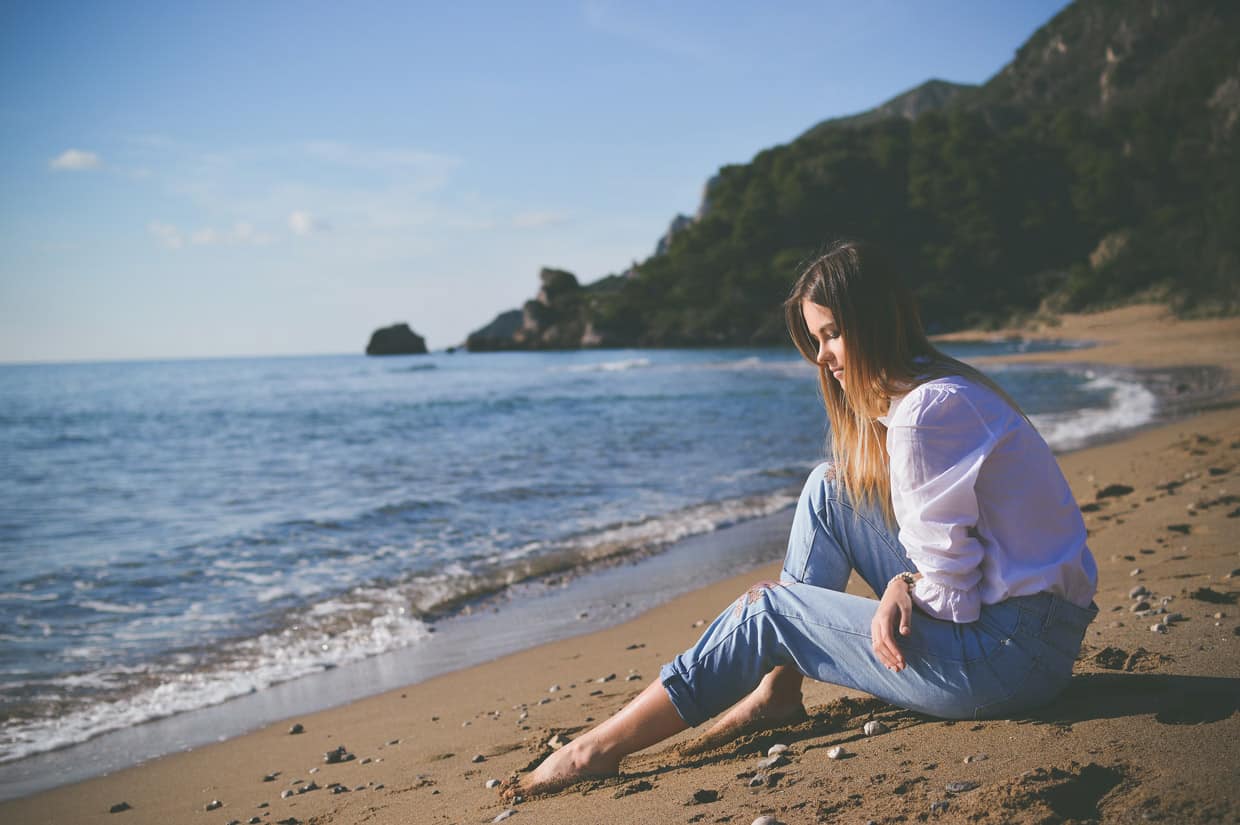 Corfu is the main city of Corfu Island, located on the eastern shore of the island. The city is divided into two parts of old and new Corfu.

The history of the old part of Corfu goes back to the 8th century. In this part, there are three castles made by Venetian engineers to defend the port against the Ottomans’ attacks. This town has been an important commercial town, and the castles were to defend their commercial interests. The castles were rebuilt several times, especially under British rules in the 19th century. In the Old Corfu, you can see the ancient arts of Venetian and Byzantine, the houses by local stones, with wooden doors and handmade tiles.

Some attractive places to visit there are: Old Fortress built-in 1546 by Venetians, is located in the east of the old town. The Esplanade, big green space between Old Fortress and the houses of Old Corfu, which is claimed to be the second biggest square in Europe, and it’s the main gathering place in Corfu. The New Fortress was built in 1577 to defend the town from the attacks of Turks. The Church of St. Spyridon, built in 1589, and the name is given from St. Spyridon, the Corfu’s patron. Its tower with its small red dome is the highest tower of Corfu.

The Mon Repos, a palace built in 1831, and you can visit it by 30 minutes walking from the city center, or you can go by bus. The Church of Saints Jason and Sosipater, a small church near the Mon Repos, is a sample of Byzantine architecture in the 11th century. The Achilleion, built in 1890 as a summer palace for Empress Elisabeth of Austria, is now open to the public. Don’t forget to visit the amazing garden around it.

The Museum of Asian Art is located in the Royal Palace, built for the British Lord High Commissioner in 1816 and then used for Japanese, Chinese and Indian artworks. This museum is in the north of Esplanade. The Casa Parlante is a historical museum, and the building was built in the 19th century in the heart of Old Corfu. When you enter this museum, you feel that you are in the past because you can feel the smell of food, hear the voice of children playing, and other things using robotic technology, animated figures, and smells. 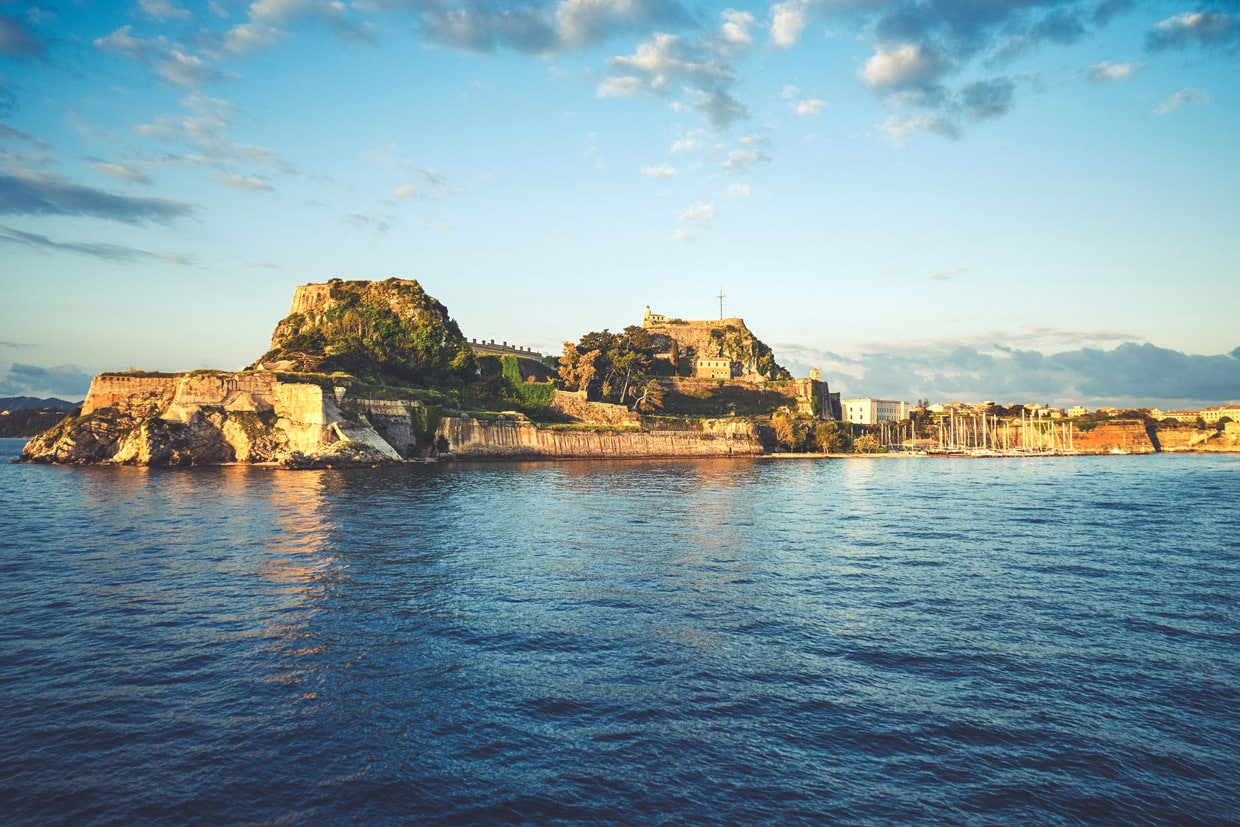 What to See in Corfu

Emperor throne or Kaiser’s throne is on the highest point of Pelekas Village. The legends say that Wilhelm the second, the German Emperor, was going on this stone structure located on a large rock to enjoy the panoramic view of the whole island, and today the tourists go there and do the same. A very good place to take nice photos.

There is a garden on the lower level by stone arcs like a tunnel and a shop for olive. Stone steps help you to go to the upper level. At the upper level, you’ll see a yard and a well in it that legends say that if someone throws a coin in, it will return to Corfu one day again. Also a church and a museum. You can go there from Corfu by your car or by bus.

In the heart of Corfu city, this amazing water park can attract everyone to have fun and excitement for hours. A surrounded area of 75000 square meters by forests. It has sunbeds, umbrellas, water facilities, restaurants, shops, showers, and changing rooms. You can buy seasonal, weekly, two days, and daily cards through the internet, so you can check the hours and prices on their website.

The Corfu Aquarium is a fascinating Aquarium with a wide variety of species. It was built in 2008. You can discover the amazing underwater world of the Mediterranean Sea when you are in large wonderful crystal caves. The ticket is 6 Euros for the adults and 4 Euros for children.

We can say that the Angelokastro fortress is the most important Byzantine fortress of Greece. It’s due to its location. It is located at the height of 300 meters from the sea in the northwestern point of Corfu Island and is dominated by a vast zone. It was built in 1272 and is called the Guard of Corfu.

The fortress is renovated, and it is worth visiting. After your car park, you have to hike for at least 15 minutes in a narrow rocky path to reach the fortress, but then you will enjoy the amazing panoramic view of the whole island and even Albania. The blue sea and the very nice nature around you. The parking lot is free, and you have to pay 3 Euros for each person to enter. 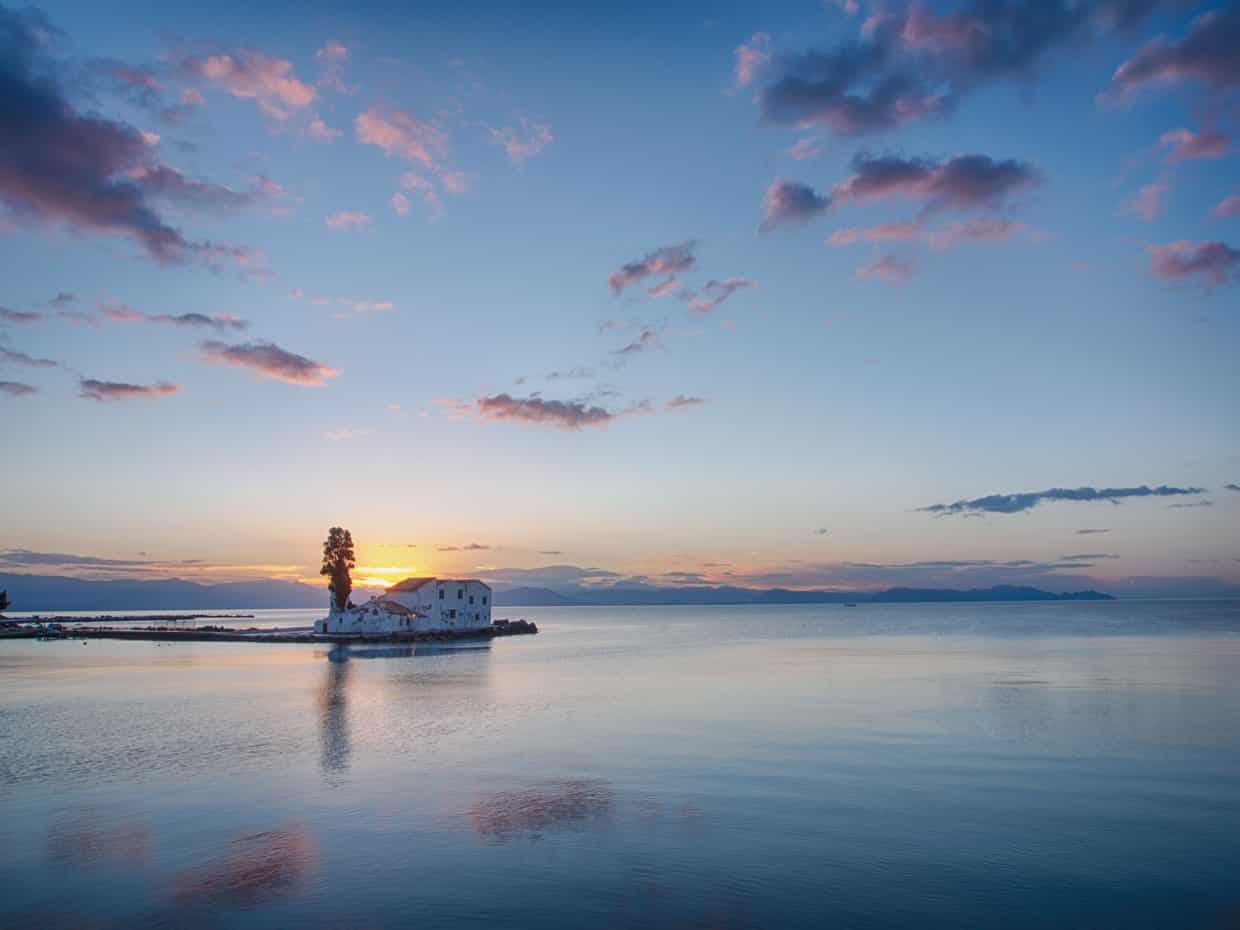 The Beautiful Beaches of Corfu

Corfu, as an island, has several amazing beaches. We want to introduce you to some of them.

In the northern part of Corfu island, near Sidari town, you can visit one of the most amazing shores of Greece. A very clean shore and the long line of umbrellas and sunbeds made a suitable destination for sunbath lovers. You can supply your needs from numerous bars, restaurants, and shops beside the beach.

Sidari is famous for its calm and shallow waters, and due to it, it’s a safe place for children to swim. The special form of rocks made a really attractive form which is called Channel of Love. Based on an old legend, if a couple swims in the Channel, they will remain in love forever. Each year, thousands of tourists come to see and sunbathe there.

In the west of Corfu island, near the Afionas village, is Porto Timoni beach. It has two beaches in two directions. The way to these beaches is not too easy; you have to pass the green hills by foot from Afionas or go there by boat from nearby places. In the past, the Porto Timoni was a harbor and had fortresses, but nowadays, it’s an attractive place to sunbathe or swim.

The turquoise water and dark green color of the trees of the hill make amazing scenery. Next to the beach, there is a cave with deep cold water. To enjoy being on this beach, you have to take water, food, and other things you need with yourself.

The Paleokastritsa beach is popular for its cold and nice environment. It’s located near Corfu town and has six promontories that are suitable places to swim, sunbathe, and enjoy the sea and mountains around with each other and a good destination for hiking and boat riding.

At the beaches you can find all your needs; there are sunbeds, umbrellas, boats, water sports bars and shops on the hills or near the water edge. The main and the biggest beach of Paleokastritsa is Agios Spiridon. Near the beaches, there are hotels and apartments for your accommodation.

In the southern part of Corfu Island, beside the traditional village of Vitalades, you can visit Gardenos beach. A suitable beach for the family. It’s a long sandy and clean beach with sunbeds, umbrellas, and plastic tables. You can enjoy swimming and boats and don’t worry about the parking lot. Usually, the water is shallow and calm. The sunbeds and umbrellas are for rent, and can rent them for 5 Euros per day. There are restaurants and bars near the shore.

This village is on the northeastern coasts of Corfu, in front of the Albanian coasts. The village, in the ancient era of Roman domination, was an important rich town. And nowadays, a very good and famous place for fishing.

It has three different beaches, the biggest one and the main beach is on the left side of Kassiopi. It’s a rocky, wide bay with various facilities, including water sports, umbrellas, boats for rent, restaurants, and finding each kind of place for your accommodation, from big luxury hotels to cheap rooms. The two other ones are smaller but more beautiful. Also, you can rent a bicycle and visit all the villages. You can go from Kassiopi to Corfu town by everyday buses.

7 Day to The Atlas and Imperial Cities of Morocco Tour