The Club med Phuket features an outdoor pool lined by a kids’ pool and an adults’ pool. The outdoor spaces at the club Med Phuket include Thai a-la-carte restaurants. The international buffet at the club med Phuket is ready to host those travelers who might not like the idea of eating just Asian food throughout their trip. Besides poolside games, sports facilities, and the nightlife at the club med Phuket, there are more traditional activities like cooking local meals and Thai boxing lessons for you to soak the local culture in. In case you’re worried the weather might be too hot or humid for your likes, you might want to choose your room from the first phase of the resort, where all rooms include air conditioners. Besides air conditioners, rooms on the relatively older side of the club med Phuket, TVs with flat panel display, boilers, comfortable furniture, and balconies. With all of the features and options rooms on the older side might offer, they still lack a view of the sea, have limited food options, and the alcohol served is, according to some, low-quality.
Added to wishlistRemoved from wishlist 0
Add to compare

Added to wishlistRemoved from wishlist 1
Add to compare
From: $522.00

The Architecture of the Club Med Phuket

Playing a vital role in Phuket’s rise to an internationally renowned beach, the Club Med Phuket started its work in 1985. Quickly becoming a phenomenon among tourists, the Club Med Phuket construction led to daily flights from Bangkok to Phuket. The first resort on the Kata beach, the Club Med Phuket, sits in the best position alongside the beach. Displaying exceptional architectural details as the result of the work of Harvard alumni, Club Med Phuket reflects traditional Thai longhouses. Sitting on 62 acres of land, the resort embraces rich gardens with colonial-style bungalows and tropical plants local to the country. Despite the foreign style gardens and bungalows, the Club Med Phuket displays a great deal of history through antique decors in guest rooms and time-worn furniture. 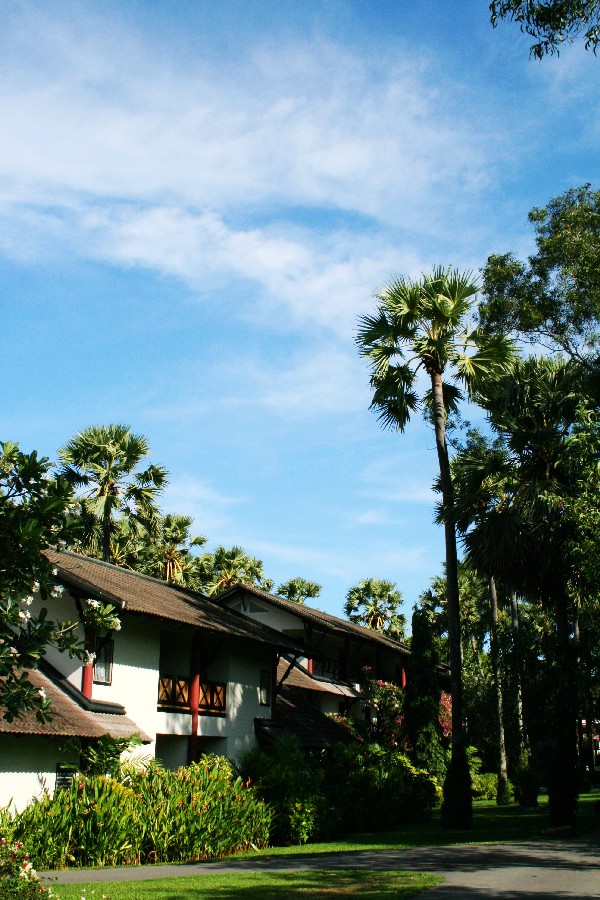 Around the Club Med Phuket

Located on Phuket’s southwestern coast, the Club med Phuket sits on the breathtaking public Kata beach in the Karon resort town. With a 15 minutes walking distance away from the Karon beach to the north and a 15 minutes drive away from the hectic Patong Beach to the south, the Club Med Phuket has proper access to the city’s main parts. The Wat Chalong Buddhist temple, only a wee 12-minute drive from the resort, offers a distinctive experience of the local people’s religion. Reaching the Big Buddha Phuket statue takes a 24 minutes drive, while it takes 45 minutes or more (the driving time might not be the same as there is heavy traffic) to get to the airport at the north of the resort. If you’re not planning to spend your whole holiday inside the resort and are ready for an adventure outside the gates of the Club Med Phuket, you will not be disappointed. Packed with massage rooms, restaurants, shops, and buzzing bars, Kata Beach is a marvelous destination for spending a little time and getting to know the locals.

Catering for all kinds of tastes, the Club Med Phuket offers dining at the two most favored restaurants. Although the meals the two restaurants offer are of fine quality, the options are unfortunately limited. Suitable for international guests, the Mamuang is a buffet-style restaurant serving international dishes for all three meals. If you prefer to taste local food when in a foreign country, you could go for Chu-Da. A Thai a-la-carte restaurant, the Chu-Da, has an impressive ambiance decorated with hanging lanterns. Serving two meals a day, the Cha-Du offers traditional and modern dishes for late lunch and dinner. As for drinking, the Sanook bar right by the pool serves morning coffees and midnight beverages. As an alternative to the Sanook bar, the Zen Bar is located right by the adults-only pool.

What Are Rooms in the Club Med Phuket Like?

Including a wide range of standard rooms and suites, there are 305 rooms in the Club Mediterranee Phuket. Coming in three and four-story bungalows, the rooms are comfortable but minimal. The floors are covered in wood, wooden furniture is abundant, hangings and bed runners are silk, and the surrounding walls shine in bright yellow. All casual rooms are on the first or the second floor, embracing a view of the garden. Club Mediterranee Deluxe rooms are a bit more spacious than the latter, featuring full mini-fridges, patios, and balconies. Suite rooms are comparatively exclusive, compromising separate children’s rooms, walk-in closets, and large bathrooms. Standard utilities include air conditioners, safes, cozy furniture, kettles, fridges, irons, ironing boards, and televisions. Hygienic amenities include anti-mosquito plugs, bathrobes, slippers, hairdryers, and toiletries. If you have an infant child who must sleep in a crib, better let them know before arriving at the resort.

A broad package, the all-inclusive package at the Club Med Phuket, covers breakfast, lunch, dinner, and snacks. Regarding alcoholic beverages, the all-inclusive package covers all branded liquors, wines, and cocktails though some might argue the liquor is not the best you can come across. The broad range of entertainment, shows, performances, and activities of the Club Med Phuket will be free to you after buying an all-inclusive package. Kids activities are also covered in the package, although if you have a toddler younger than 4, you might have to pay an additional price.

Facilities by the Beach

Despite being located on Kata Beach, the Club Med Phuket does not directly access the beach. Accessing the beach, guests need to cross a road first. A public beach, there are no loungers on the Kata Beach, but Club Med Phuket provides umbrellas and mats for guests. It is also possible to rent beach beds and lay down on the towels provided in your room. 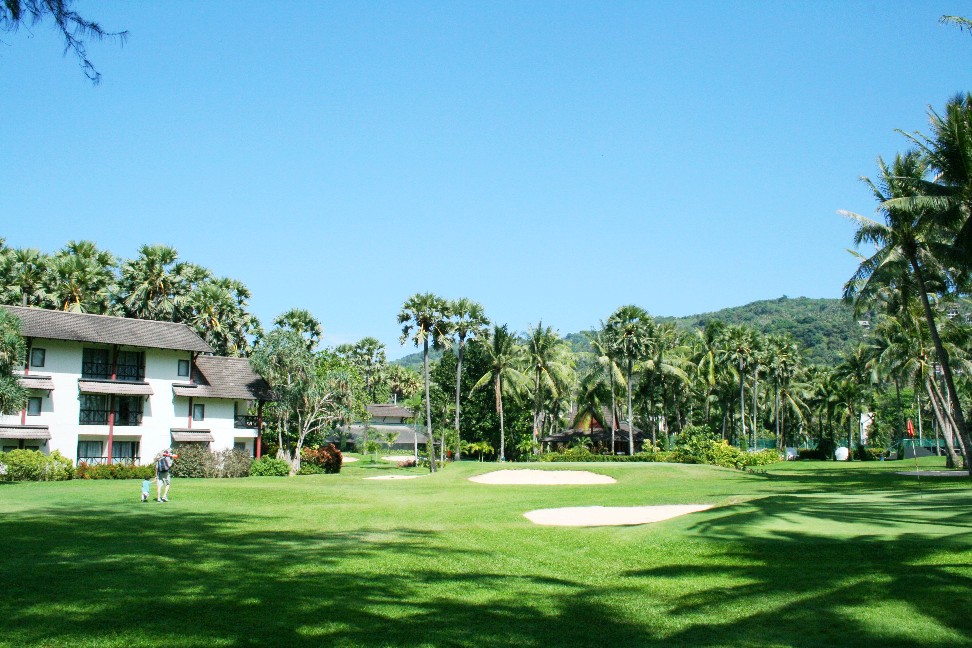 The best time to visit Club Med Phuket is between November and April. The period embraces the best weather conditions for beach activities. The period between May and October is the monsoon season In Thailand. Although accommodation prices are much lower in the monsoon season, it is not worth taking the risk of a flood to travel to Thailand at that time of the year.

A hectic season for Thai tourism, the months between November and April are the best time to travel to Thailand. When temperatures are around 26 degrees Celsius and the oceans relatively still, the accommodation prices are at the highest end.

Characterized by heavy rains and a wavy ocean, the monsoon season starts in May and continues until October. Swimming in this season is not recommended, but if you do not mind a bit of rain, you can take advantage of this season’s low accommodation prices. Average High/Low Temperature in Phuket

Getting Around Club Mediterranee Phuket

Although the best vehicle for traveling around Club Med Phuket is a tuk-tuk, you might have to switch for another means of transportation such as a taxi at times. Tuk-tuk is the most characteristic means of transportation in Thailand, and it is found in abundance around Club Med Phuket. Although very practical, tuk-tuk can be an expensive means of travel, if you intend to explore outside of the town. For long trips, it is better to get on a taxi, songthaew, or a rental car. Most international flights land in the Phuket International Airport (HKT) to the north of the Club Med Phuket. It should be wise to check beforehand to know if the shuttle service will be awaiting you at the airport. In case you need to get to the Club Med Phuket on your own, you might take the airport bus taking you to Phuket Town. If the airport bus is not in sight, a cab would be the best option to get to your hotel. Some vans and minibusses will take you there with less expense, but it is hard to tell which one is reliable. If you intend to get on a minivan, better discuss it with your hotel in advance.

Getting Around by Car

Renting cars in Phuket is possible through several operators such as Avis, Budget, and Hertz, all of which you can find at the airport. Renting cars through your hotel will be more economical, as they’re able to discount the price for you. Driving a car around the Club Med Phuket requires an international license obtainable from AAA, as well as your native country’s license. It would be best if you kept in mind that there are not many facilities on the roads around Club Med Phuket and the roads lack decent quality, so getting help from a GPS device would be highly recommended.

Getting Around by Taxi

Although taxis are found in abundance around the Club Med Phuket, getting your hands on a metered taxi might not be very easy. The Thai version of the Uber app, the Grab smartphone app, can help you get to your destination when there are no metered taxis around.

Getting Around by Tuk-Tuk

If you intend to explore within the city, a tuk-tuk is the best option for you. The main disadvantage of traveling by a tuk-tuk is that there are no stable rates for determining travel costs. Before negotiating the price, keep in mind no fares within the town should cost more than 50 Thai baht.

Getting Around by Songthaew

Traveling between beaches is best with a Songthaew. A converted pickup truck featuring two rows of seats, the Songthaeis s way cheaper than a tuk-tuk. Songthaews operate from 7 a.m. to 5 p.m. and cost around 25 Thai baht.
Related Stories
Added to wishlistRemoved from wishlist 0

The Mysteries of the Desert