Central Post Office is one of the most iconic tourist landmarks in Ho Chi Minh with wonderful colonial architecture and elegant decorations.

Ho Chi Minh City, formerly known as Saigon, has several well-preserved pieces of its colonized times left, and one of them is the Ho Chi Minh Central Post Office. During the rule of the Indochina Empire, and even many years later, Saigon was considered as one of the most important cities of the country. Because of this, you can see several other magnificent European style buildings nearby, such as the Notre Dame Cathedral of Saigon.

In any case, these beautiful buildings still function after many years and several wars. They have also become beautiful attractions of Ho Chi Minh City because of the unique appearances in some of its neighborhoods.

The very first Post Office of Saigon was opened in January 1863, which was designed by Gustave Eiffel. By the time its construction was finished, it was not expected that the building will need to be rebuilt and expanded. The building was just fine, but since it needed repairs and more grounds, it was decided to make major modifications after only a few years of its construction.

The Ho Chi Minh Central Post Office that we see today was constructed between the years 1886 and 1891 in the same spot as before. A lot of people argue that this design is also the work of famous Gustave Eiffel but, it is in fact made by Auguste Henri Vildieu and under the supervision of Alfred Foulhoux.

Foulhoux has been living in Saigon since 1874 and was appointed as the “Architect in Chief” in a short time. During his time in this city, he was in charge of designing many of the official and colonial buildings such as the Post Office and the Governor’s Palace. It was only one year after he finished his final work, the building we now know as the Ho Chi Minh Central Post Office, that he died in 1892.

The building has the architectural style of French, Gothic, and some Asian designs. Its green windows and light-yellow color also show that it used to be an office building of the colonial times. Right above the entrance, there is also a large clock, making the iron entrance of the building noticeable from afar. As you move close to the structure, you can see plaques between the windows with the names of famous inventors on them.

As soon as you enter, the first thing that meets the eyes is the vast space and huge dome-like vaulted ceiling. You will then see that this beautiful ceiling is supported by two rows of steel pillars on both sides. On the other end of the building, you will also see a large picture of one of the most important men of Vietnam, Ho Chi Minh. Everything you see makes you feel like you are walking in the 19th century Europe with all the phone booths and the large clocks.

Just as you start walking more into the building, you will notice more and more beautiful parts of the building. As you reach the phone booths on either side, you can see two maps above each row of booths. They are very old maps that date to the 19th century and show the telegraph lines of the region at that time. 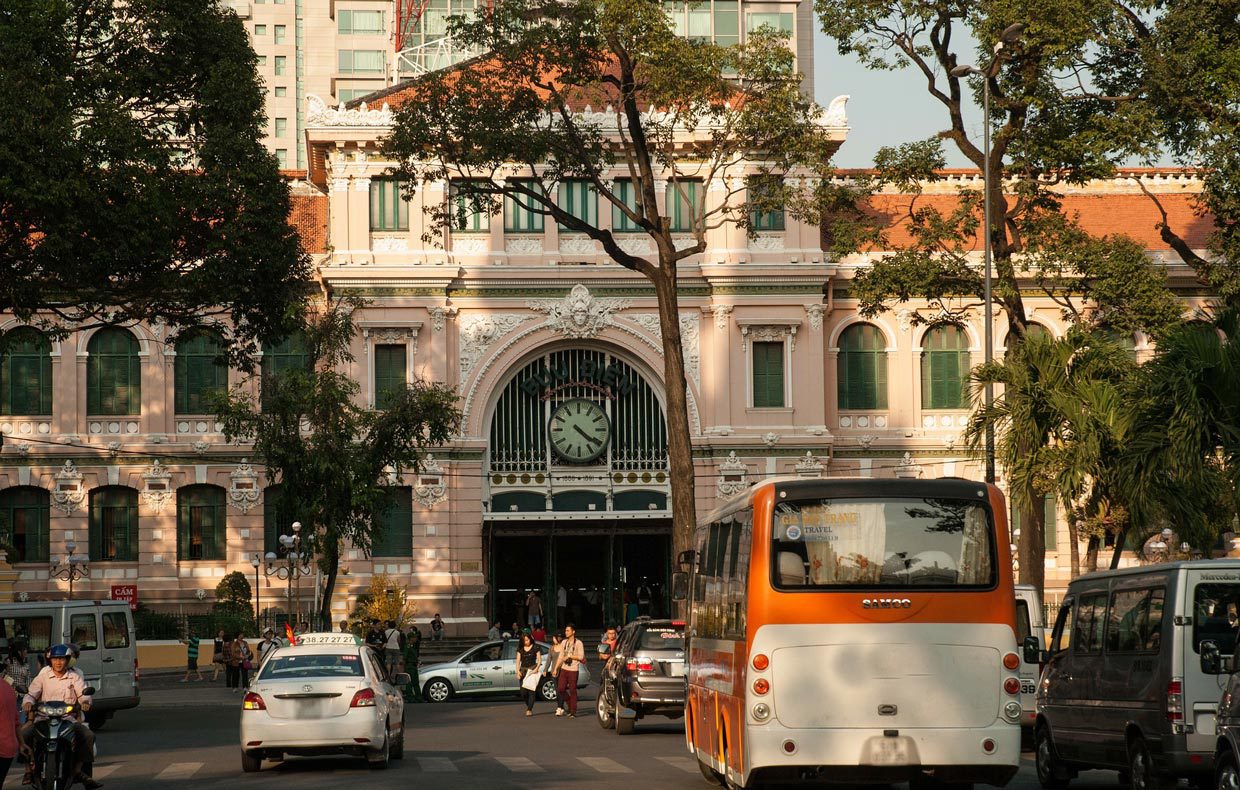 While visiting the Ho Chi Minh Central Post Office, you can just walk around and enjoy the building and its architecture or send letters with the old fashion way. Alternatively, you can buy postcards or souvenirs to send to your loved ones. It is not as fast as taking a picture with your smartphone and posting it online, but rather, a sense of nostalgia. If you have a hard time about what to write or have bad handwriting, there are writers there that can help you!

Enjoy it while it lasts since you will rarely see ‘letter writers’ or old-school post offices like this one. If you do not trust the prices at this site, it is best to buy your souvenirs from outside the post office and only use the posting services inside.