The Brandenburg Gate is an iconic part of the city’s cultural heritage today. Since the fall of the Wall, Berlin’s only surviving historical city gate has come to symbolize the two sides in the Cold War - and, since then, the new, united Germany. The sandstone Brandenburg Gate is also an outstanding example of a German neoclassical building built earlier in history.

No trip to Berlin is complete without a stop at the Brandenburg Gate! Known throughout the city as its iconic landmark, this site is a fascinating glimpse into the city’s past. Berlin’s Brandenburg Gate (in German: Brandenburger Tor) is one of the city’s most important monuments – an architectural landmark and historic symbol at the same time. Germany and Europe have been tied to this place for over two centuries.

Let’s take a look at this fantastic gate and get more familiar with this German structure.

A Drama-Filled with Pride

Since the Brandenburg Gate was built, major events in Berlin have always taken place there, including royal parades, commemorations organized by the Nazis, and Napoleonic marches and rallies. In the first half of the 20th century, the Brandenburg Gate was untouched. Then, however, the Second World War severely tore into it and affected its structure. 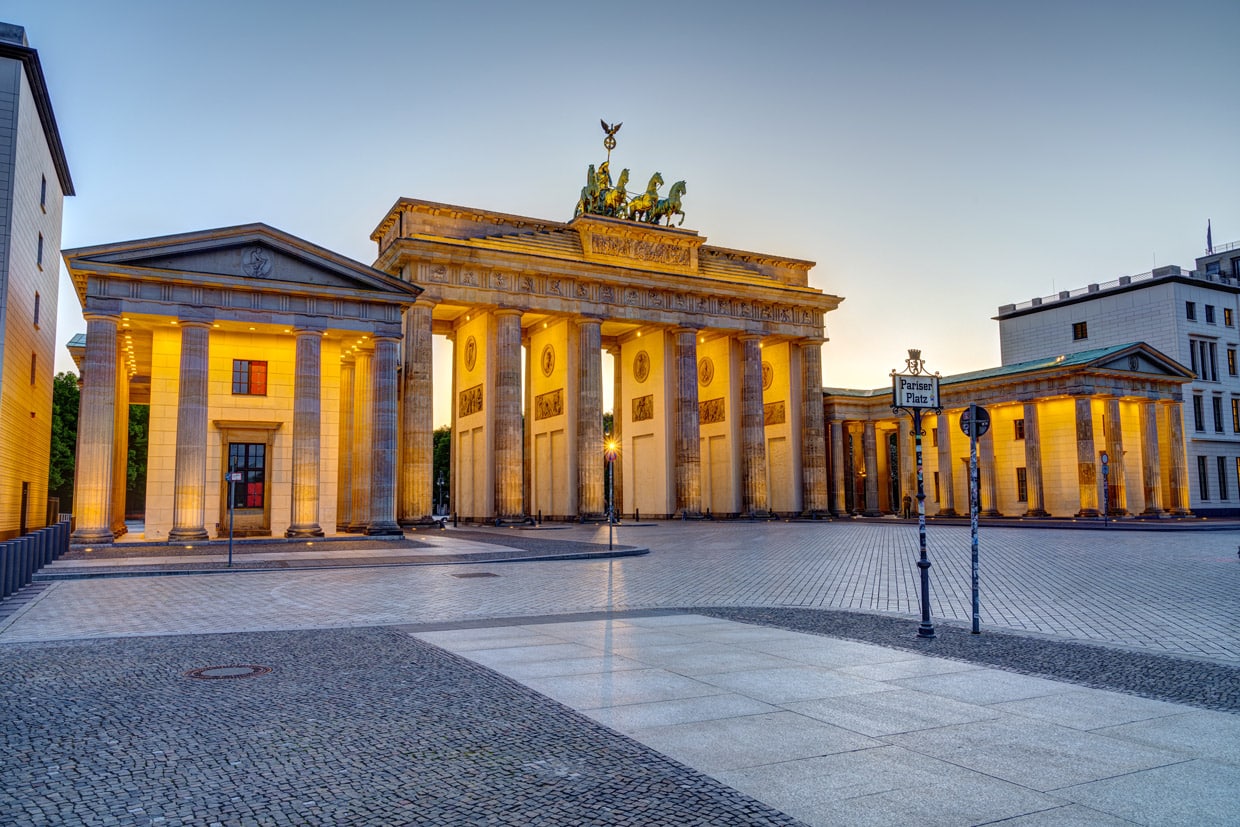 Berlin’s first Greek Revival building, the Brandenburg Gate, was built between 1788 and 1791. Architect Carl Gotthard Langhans, the architect of the Prussian court, used inspiration from the Acropolis gateway in Athens for this design.

Johann Gottfried Schadow crowned the gate with the Quadriga statue in 1793. There is also a fascinating backstory to this statue. As a victory prize and a sign of his victory, Napoleon’s army transported the Quadriga to Paris in 1806 after capturing Berlin. It was returned to Berlin after Napoleon’s forced abdication in 1814, where it once again adorns the Brandenburg Gate, facing east and towards the city center.

When Germany and Berlin were divided after World War II, the Brandenburg Gate fell within the Soviet sector. In 1945, the flag pole atop the gate flew a Soviet flag until 1957, when an East German flag replaced it. Berlin’s Brandenburg Gate was an exclusion zone when the Berlin Wall was put up in 1961, inaccessible to locals and tourists alike. On December 22nd, 1989, roughly 100,000 people gathered here to celebrate the opening of the Brandenburg Gate after the fall of the Berlin Wall. In the coming days, crowds flocked to the area to celebrate this first joint New Year’s Eve in this once-divided city.

The gate was perhaps most famous for its appearance on January 30th, 1933. It was when Adolf Hitler led a procession through the gate to the presidential palace following his accession as Chancellor. After World War II, much of Berlin suffered major destruction. However, the gate emerged relatively unscathed. There is only one horse’s head from the original Quadriga that is kept at the Markisches Museum today.

Gate measurements are 20 meters (67 feet) high, 65 meters (214 feet) wide, and 11 meters (37 feet) deep. The gate was intended by Friedrich Wilhelm II to be an architectural celebration of victory that was influenced by ancient Greek architecture. As a result of his study of the Propylaea, the gateway to the Acropolis in Athens, Langhans based the design on this gate. This structure is constructed from sandstone and has twelve columns, six on each side, forming five passageways.

In contrast, the outermost two on each side were meant for ordinary citizens, while the central passageway is a little wider and was designed only for the royal court. Due to the status in hierarchies, the width differs. Toll collectors, soldiers, and guards were accommodated on the columns at each side.

There are many carvings and bas-reliefs on the gate, most of them depicting stories about Heracles. They were most likely created by Gottfried Schadow. An even larger sculpture is featured on top of the gate, a Quadriga, to represent four horses in a chariot, also from Schadow. According to Greek mythology, Eirene is the goddess of peace riding in a chariot.

In front of the Brandenburg Gate is Pariser Platz, a picturesque square. Unfortunately, many of the buildings surrounding this historical square were destroyed by the Second World War II. It was only in the 1990s when this prime location underwent restoration. Elegant townhouses, embassies, as well as the five-star Hotel Adlon now occupy this prime location.

In style derived from the architecture and design of the Prussian master builder and court architect Friedrich August Stüler, the Max Liebermann Haus and the Haus Sommer, either side of the Brandenburg Gate, resemble a matching pair. Also located at this historic site are two other buildings that house the embassies of the United States and France.

Both sides of the gate were built with Gatehouses which were for the guards and the tax collectors. As the tariffs and excise walls ended in 1868, Heinrich Strack, Schinkel student, and designer, replaced the Gatehouses with columned halls. Through the design of those, he brought attention to the gate.

The Brandenburg Gate is topped with a quadriga. The sculpture is made of copper and stands 5 meters high. Schadow built it as well.

A winged goddess of victory-Victoria- standing in front of the City Palace in the east is represented by this figure. The scene makes it look as if Victoria is pulling a cart drawn by four horses into the city. 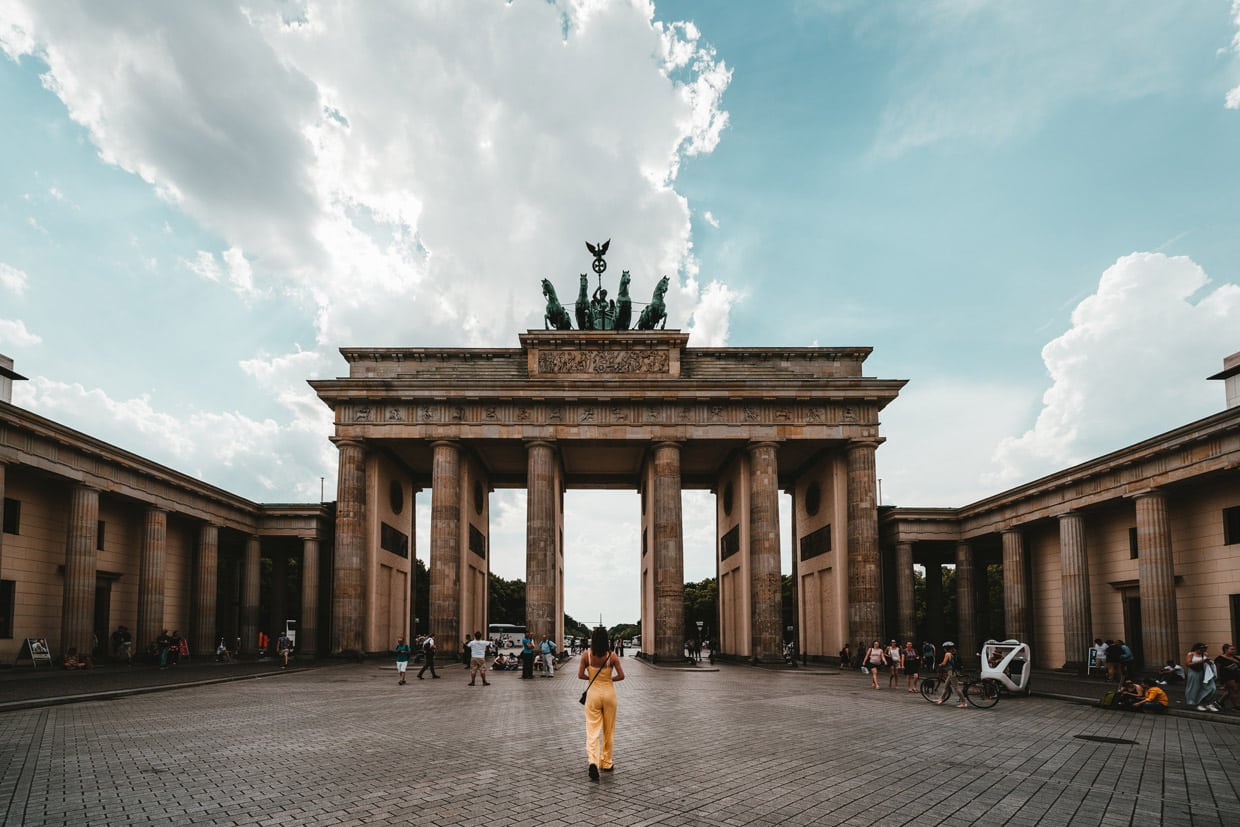 In 1989, the Brandenburg Gate was rapidly transformed into the symbol of unity in New Berlin following the fall of Berlin. On December 22nd, 1989, the road was officially opened to traffic, with 100,000 people attending the celebration. Unfortunately, the monument was severely damaged as a consequence, and it was only able to reopen to the public on October 3rd, 2002, after extensive restoration work.

Accessed via Unter den Linden and Ebertstraße, it is located next to the Reichstag, at the intersection of the two boulevards. A gate stood here once, marking the start of Brandenburg an der Havel’s road between Berlin and the old fortified city. 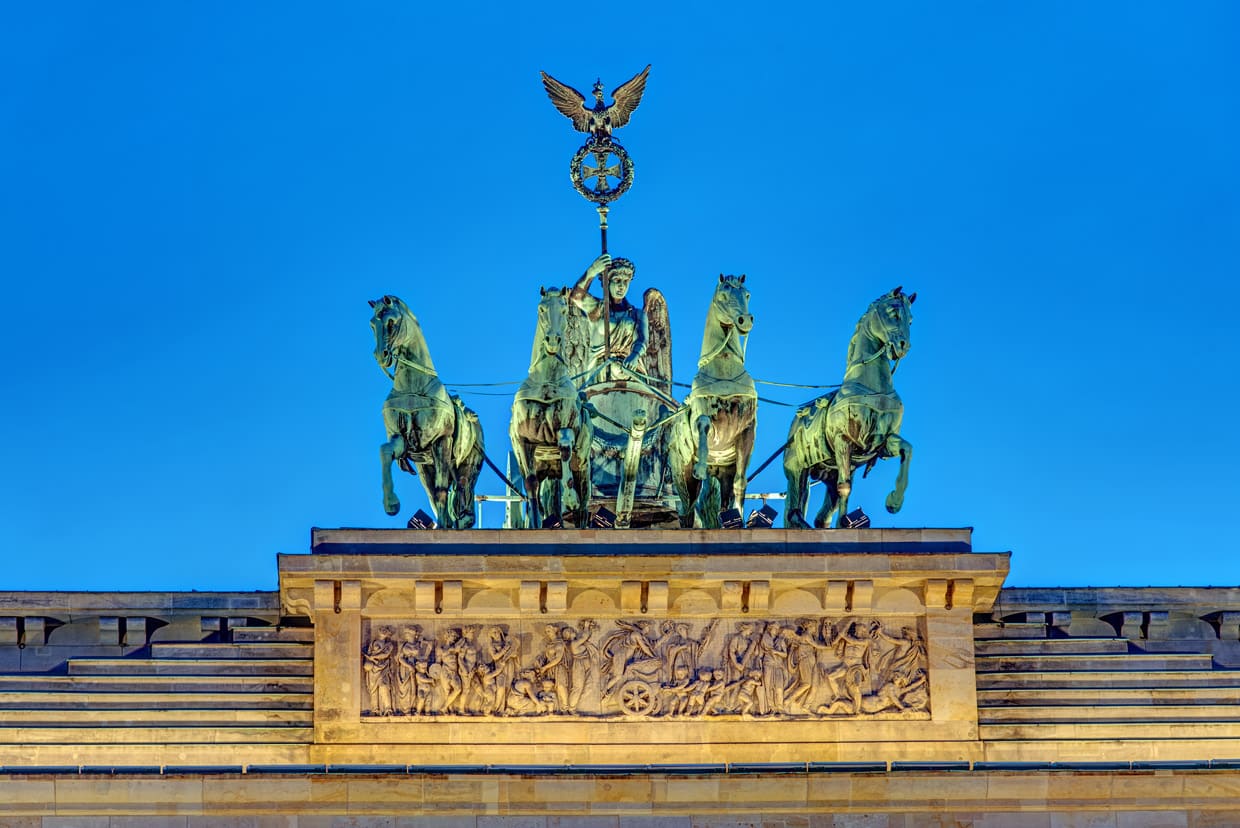 There is a wealth of information at the Berlin Tourist Info in the south wing of the Brandenburg Gate on the city’s top events and attractions, along with hotel and ticket booking services. Besides visiting the Brandenburg Gate, this is a great place to explore the surrounding sites, such as:

Located on the north wing of the monument, the “Raum der Stille” (Room of Silence) can be sought out for quiet moments before crossing over to the other side.

You can visit the Brandenburg Gate any time of the year – it’s never closed. You can also make your visit here an event to remember! Join in the fun and ring in the New Year with a live performance on the party mile and an exciting firework display at the renowned New Year’s Eve party.

At the FIFA World Cup or UEFA EURO championships, many fans watch their teams on the big screens. However, at any time of year, visitors and locals flock to the Brandenburg Gate – not only is it an icon for German unity, but also Berlin’s energetic lifestyle! 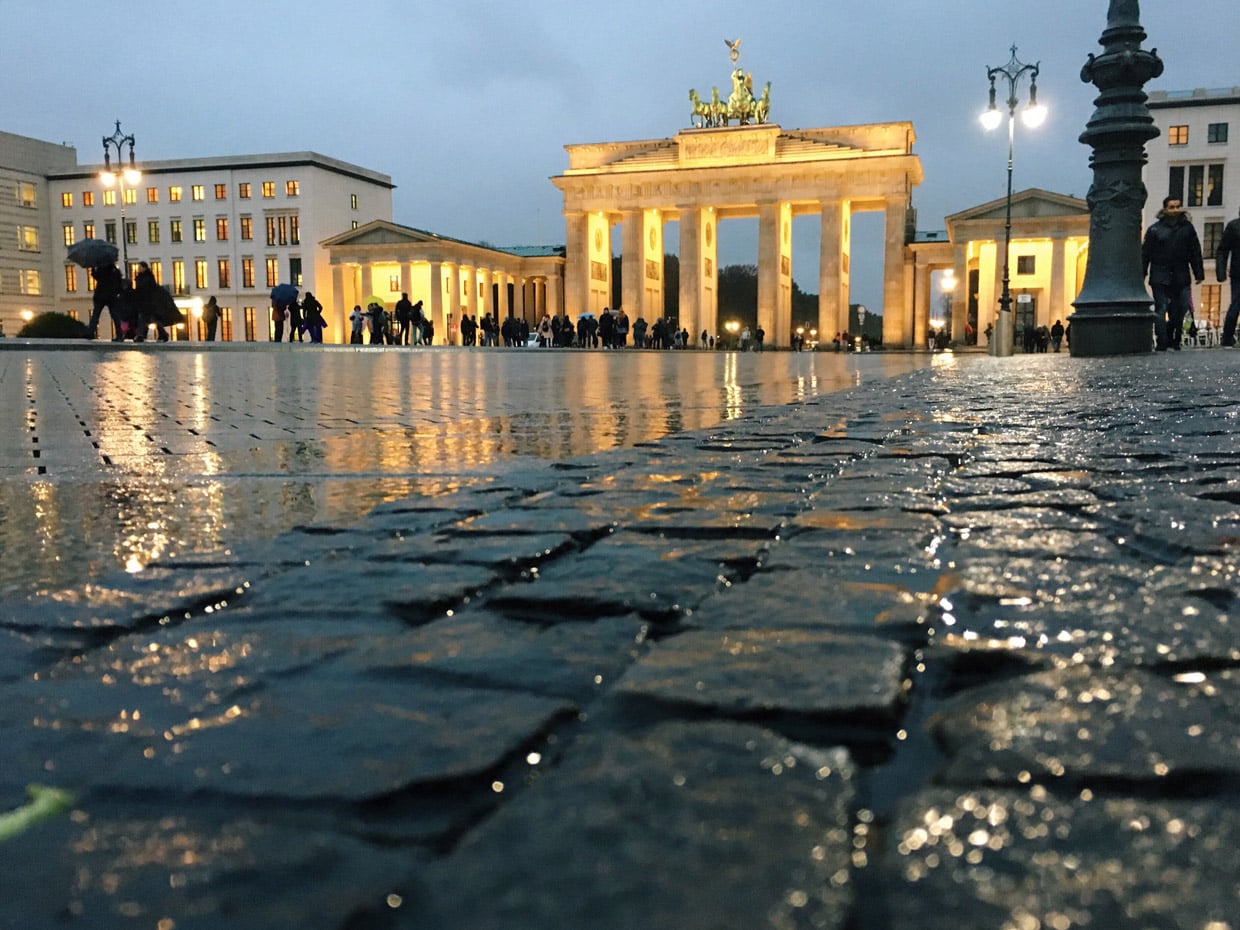 As you read, Brandenburg Gate isn’t just a simple gate! There is lots of storage behind each brick of this structure, and it has an important role in German history. This is a structure that shows the pride and honor of a great nation for years. So in the case that you visit Berlin or even want to get more familiar with German history or the nation, there is nothing more critical than visiting this place.