Located near the Forbidden City, The Beihai Park is one of the largest and well-preserved royal gardens of China constructed in the 11th century in Beijing.

The Beijing Beihai Park, also known as the Northern Sea Park, is one of the oldest, biggest, and most well-preserved ancient royal gardens in China located at the center of Beijing with more than 1,000 years of history. The Beihai Park is an ideal tourist spot in Beijing not only because of its perfect combination of northern garden grandiosity and southern garden refinement but also because of its classic integration of stunning royal palaces and serene religious constructions.

Many locals believed that Beihai Park was constructed based on a traditional Chinese legend. It is said that on the eastern side of Bohai Bay, three magical mountains are located. These mountains are named ‘Penglai’, ‘Yingzhou’, and ‘Fangzhang’. According to the legend, the Gods residing in those mountains possess a kind of herbal medicine that could make humans gain immortality.

Because of this, many emperors of China who failed to find the mentioned mountains, ordered to construct a large pool that is piled up with 3 earth hills in their palaces. Some of the emperors who imitated the magical mountains with the hopes of having eternal life are Emperor Qin Shi Huang of the Qin Dynasty and Emperor Wudi of the Western Han Dynasty.

Beihai Park was then built during the Liao Dynasty (916-1125) while many other dynasties including Jin, Yuan, Ming, and Qing Dynasties repaired and reconstructed the park. Its current scale and pattern were determined when Emperor Qianlong of the Qing Dynasty had a large-scale rebuilding of the garden. It was initially opened to the public in 1925 and since then, hundreds of thousands of tourists would visit the park every year.

The park covers a total area of around 70 hectares and more than half of it is covered by the lake. In the middle of the lake, which is also the core axis of the entire park, Jade Flower Islet is located. Everyone can easily find it because it is topped by the stunning White Dagoba which is also the islet’s landmark. Besides the Jade Flowery Islet, the other major scenic areas of the park are the Eastern Shore Area, Northern Shore Area, Botanical Garden, and the Circular City, which is located near the north gate.

Added to wishlistRemoved from wishlist 0
Add to compare
From: $1,875.00

Constructed in 1651, the White Dagoba was constructed on the previous site of the Palace in the Moon where the Marco Polo was received by Kublai Khan. The first emperor of the Qing Dynasty, Emperor Shunzhi, then agreed to a suggestion of a famous Tibetan Lama to construct a Tibetan dagoba. The White Dagoba depicts the emperor’s belief in Buddhism and his aspiration for unification among the different Chinese ethnic groups. It was devastated by an earthquake and was renovated twice.

Today, it rests on an enormous stone base and stands with a height of 37 meters. It is covered by 2 bronze canopies that are shaped like umbrellas where 14 bronze bells hang. The dagoba holds 2 pieces of Sarira, the monk’s mantle, and alms bowl, as well as the Buddhist Scriptures. The White Dagoba is the highest point that offers a stunning view of the entire scenic spot.

In front of the dagoba, you can find the Yong’an Temple. There are also a number of other tourist spots that are near the White Dagoba such as the Shanyin Hall, Zhengjue Hall, Bell and Drum Towers as well as the Stone Tablets of ‘Qiongdao Chunyin’. These buildings are all dispersed on the Qionghua Islet’s slope.

From the Qionghua Islet, you can go to the Eastern Shore Scenic Area by crossing the Zhishan Bridge. Here, there are other independent gardens like the Painted Boat and Hao Pu Creek Garden.

Constructed in 1757, the Hao Pu Creek or Haopujian Garden is one of the most beautiful sections of the garden. It got its name from the two rivers of Anhui Province namely ‘Hao’ and ‘Pu’. Emperor Qianlong ordered the construction of the garden to create a place for happiness and relaxation where he can be as free as the fish in the river. That’s why the garden was styled to depict tranquility and happiness. It features a special mountain-water structure to present an impression of a deep valley that is secluded from the rest of the society.

Moving westward from the Eastern Shore Area, Northern Shore Area is located where you can find the Quiet Heart or Jingxin Studio. It was originally built during the Ming Dynasty, but it was enlarged during the Qing Dynasty. Inside the garden, there are several stunning palaces, pavilions, halls, corridors, towers, artificial hills, and other beautiful and artistically arranged patterns. Many of the royal members during the Qing Dynasty used to go here to study or even just rest.

Northwest of the Northern Shore area, you can find the popular Nine-Dragon Screen, which is the only screen that has 9 enormous dragons on each side. It’s one of the most well-known three Nine-Dragon Screens in the country. The other two screens are located in the Forbidden City and in Datong, Shanxi Province.

The Nin-Dragon Screen here in the Beihai Park was constructed in 1756 with a length of 27 meters, a height of 6.65 meters, and a thickness of 1.42 meters. It is consists of 424 seven-color glazed tiles that are embossed from the screen. With the nine enormous coiling dragons on both sides of the screen and the other big and small dragons decorated at the two ends and the eaves, the total number of dragons here is 635, surprisingly.

In the southwest of the Nine-Dragon Screen, you can Five-Dragon pavilions, which are composed of five linked pavilions with pointed eaves and spires. If you look at them from a distance, the pavilions will appear like an enormous dragon. It was initially built in 1602 and renovated numerous times during the Qing Dynasty. The different intricate engravings and paintings on the pavilions’ girders and pillars make such a beautiful relaxing place for ancient China’s royal members.

Around the pavilions, there are other scenic spots that you can enjoy visiting such as the Chengguan Hall, the Heavenly King Hall, and the Temple of Little Western Skies. 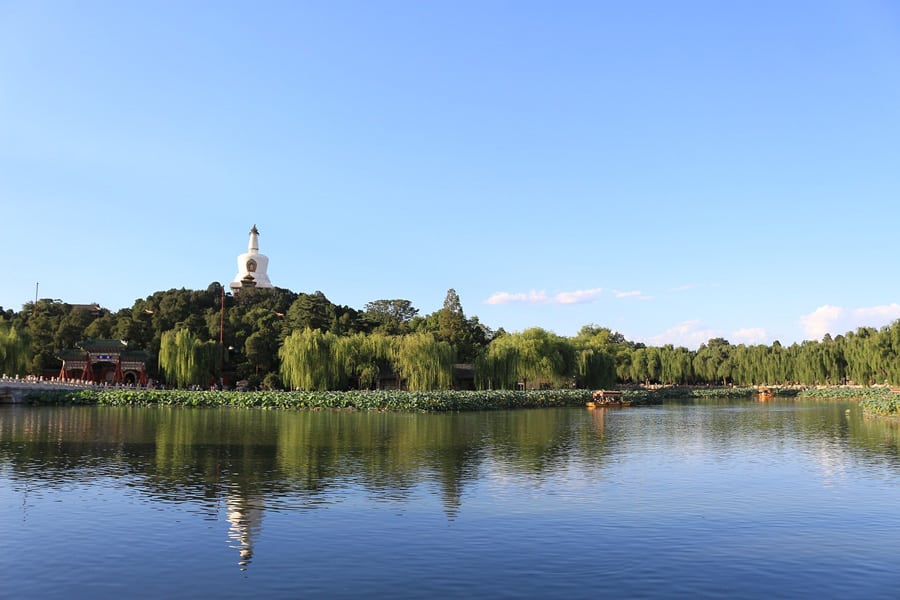 At the southwestern corner of the park, Circular City exists, which stands 4.6 meters high and has a circumference of 277 meters. The City has many tourist offerings such as halls, pavilions, and towers; however, the most significant construction here is the Chengguang Hall. It holds the most precious white jade statue of Buddha which was introduced from Burma during the end of the Qing Dynasty.

Right in front of the hall, a grand urn exists, which is made from variegated dark jade. The urn was previously used as a vessel of Kublai Khan’s wine storage. It stands at a 1.5-meter height and weighs 3.5 tons.

Inside the Circular City, the Fangshan Restaurant is located where you can enjoy sumptuous imperial flavored dishes that originated in 1925.

It should be mentioned that from April to October, the ticket office closes at 8:30 pm, and from November to March, it closes at 7:30 pm; therefore, try to book your ticket in advance. If you have more information to share, feel free to leave your comments and thoughts for us. Besides, if you need more detailed information, you can send your question as a comment and our professional guides will reply as soon as possible

Malta Tour from Gozo to Rabat and Mdina