Out of all the cities in the world, Istanbul is known to have the most cisterns. And it's not just about quantity! The cisterns laying under the streets of this city each have their own unique story and structure. But if you only want to visit one cistern in your life, we recommend this breathtaking underground palace, named Basilica Cistern. It won't disappoint!
In This Article
History of Basilica Cistern
Current Condition
About The Structure
Mystery Items
Location
Nearby Restaurants
Movies And Books
General But Needed Information

There are over 100 large cisterns in Istanbul, Turkey, but Basilica cistern is by far the largest and most impressive one of all. This cistern looks more like a palace than an underground water tank. The whole place has a mysterious vibe to it. Just walking through it will give you the chills you have never experienced before. That’s probably why a lot of movie directors chose this cistern as one of their filming locations. If you haven’t seen a cistern before, visiting the Basilica cistern will definitely be a great way to get to know about this remarkable structure.

During ancient times, supplying water in cities with dry climates was an issue in every corner of the world. One of the best solutions was building cisterns to maintain and keep the rainwater for when there is an essential need for the saved water. Back then, a lot of people had their own small cisterns.

The Basilica Cistern, built originally by Emperor Constantine, was reconstructed by Emperor Justinian after the structure was damaged due to some riots. The cistern, also known as Yerebatan Palace, was formerly used to supply water for Constantinople. Later during Emperor Justinian’s reign, the water was used in the great palace.

After the Ottomans took over the city, they built their own running water system. At first, the cistern was used to water Topkapi’s gardens, but it was forgotten over the years until the 16th century when Peter Gyllius was informed about how some of the locals were using an underground river to get water. Some were even catching fish from there!

That clue got him looking for and finally finding a basement entering the cistern. This was one of his biggest discoveries as he was looking for ancient structures and objects.

This landmark has been repaired several times since it was rediscovered in the 16th century. But it only became open for the public to visit in 1987 since it wasn’t in good condition before that.

Thanks to the Istanbul Metropolitan Museum, in 1985, the cistern went under a restoration process. It included removing about 50,000 tons of mud and junk, installing wooden platforms and lights through the place, building a flight of stairs for the entrance, and much more. Before the wooden platforms were built, you couldn’t walk around the cistern. Instead, you had to roar a boat around! 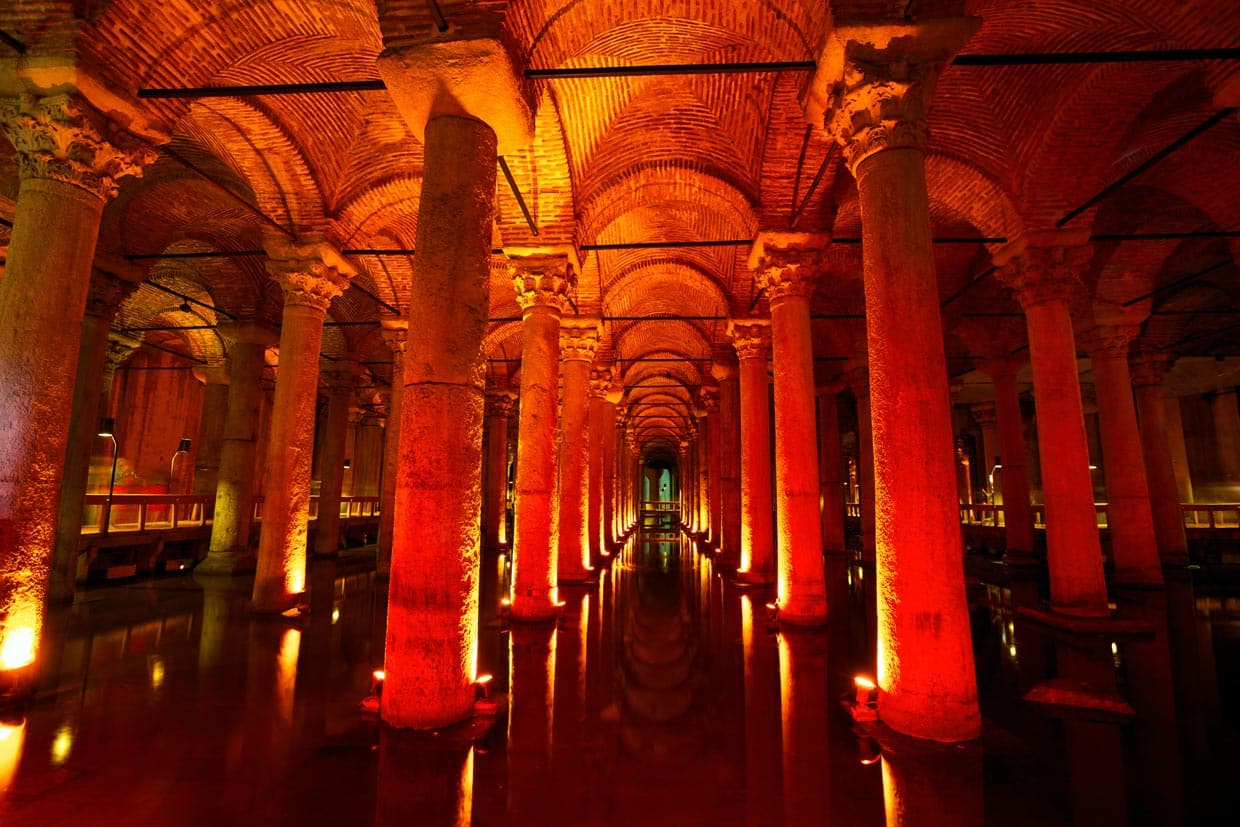 It is said that this cistern originally had a garden and columns all made of marble. There is no evidence left of the garden. However, the columns have been proved to be made of marble and granite. It is also believed that the marbles used in its construction are recycled from other temples.

The walls are about 5 meters thick to make the structure waterproof as it needs to be. There are 336 columns, each 9 meters long – perfectly divided into 12 rows. The area is about 140*70 square meters and can maintain about 80,000 cubic meters of water. This capacity has made this cistern a wonderful place to talk about. The entrance is connected to the cistern by 52 stairs. The water kept in this cistern was transported through special water canals from Belgrade Forest, about 20km away.

As mentioned above, most of the columns in the Basilica Cistern seem to be recycled ruins from other buildings around the country. A lot of the columns have specific carvings or engravings made of different types of marble and granite,, which is another reason for that opinion. Some Of the most mysterious and famous items in the cistern are:

The most famous pieces in the basilica cistern are the 2 column bases with gorgon heads. These two columns are located on the left side of the area. Although it’s obvious that the Medusa heads are reused pieces from somewhere else, we still don’t know where they come from originally. They were probably once a part of a building in the Roman period, but unfortunately, there is no authentic evidence to find the truth.

One of the gorgon heads is on its side, and the other one is positioned upside down. Legends say they are placed this way to break the curse of the Gorgon Eyes. According to this legend: “Anyone looking at Medusa’s eyes would turn into stone.” a lot of people believe in this thought because the height of the upside-down Medusa head would have been the same if it were placed upright. And frankly, they’re not wrong!

While most of the columns in the cistern have an overall smooth surface, there’s one that you can definitely identify its carvings. This column, known as “The Hen’s Eye” column, has a lot of the same carving all over it, which is shaped like a tear. This column looks much like the columns in the Triumphal Arch of Theodosius. The tears on the column are now believed to be an attribution to the slaves who died during the construction of the cistern. May they rest in peace! 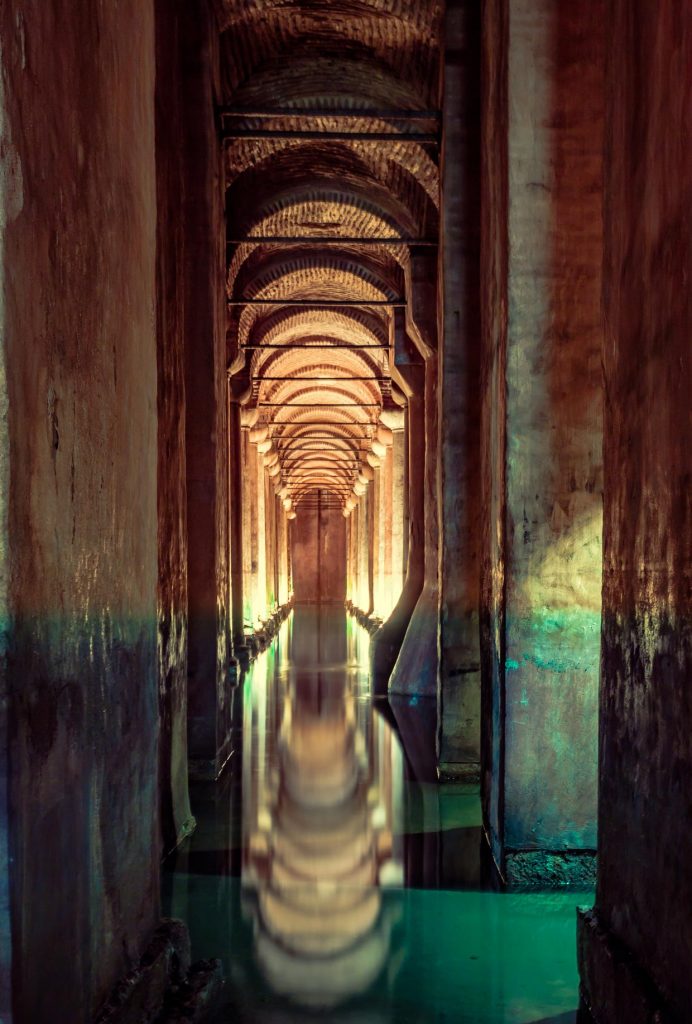 Since Basilica cistern is near many other popular attractions of the city, you won’t face any problem finding a good restaurant or other facilities. But to help you choose a place, here are a few of the best restaurants near the cistern. Because the Basilica Cistern is mostly visited before or after other close attractions, you will need to dine somewhere near your destination. These restaurants are there to help you find the best meals during your journey in this part of the city.

Not only is this restaurant close to the attraction, but it’s rated the best place to dine in Istanbul. Anyone who has had a meal here gives it a 5-star without a doubt. According to the reviews, the seafood casserole, Anatolia kebab, and the pepper steak are why people keep coming back here!

Five minutes away from the Basilica Cistern, this place is most people’s go-to restaurant when they’re in the neighborhood. It is famous for its Turkish food, but the menu isn’t limited to that. They also have vegan and international options to bring you the sense of being home.

As you can probably tell by the name, this is the closest restaurant to the cistern. The food is tasty, and you will have lots of different options to choose from, like vegan and gluten-free food.

There were several movies filmed in this location and books which were inspired by it and mentioned Basilica cistern. You might like to watch them before or after your precious experience of being there; if so, some of the most famous ones are: 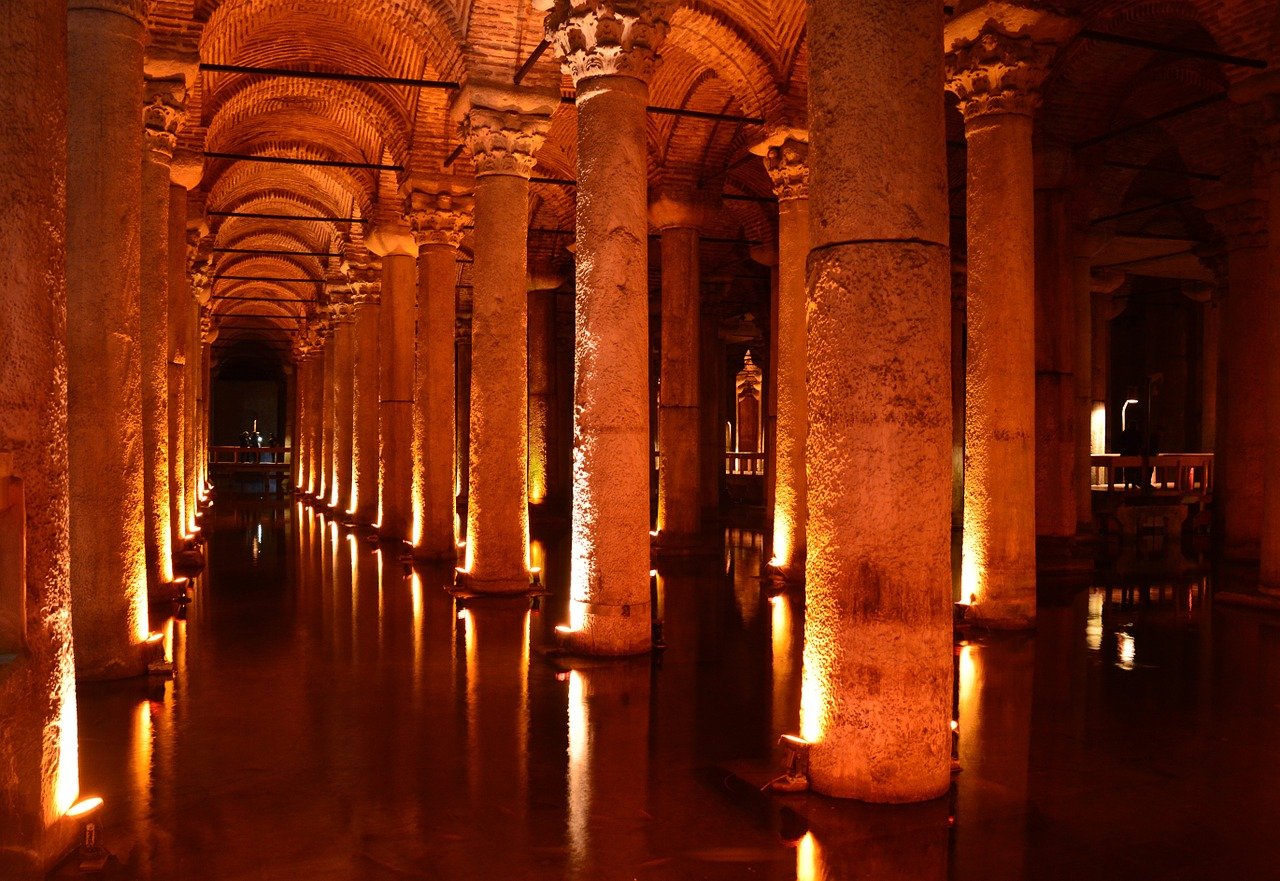