In addition to being a century or two north of Bangkok, Ayutthaya city also has a beautiful attraction that is home to hundreds of years old sacred temples and palaces. Located in the Chao Phraya River valley, this historic site was established in 1350 and was once the center of global trade and commerce, and it was home to over one million people. In 2013 Ayutthaya was placed on the list of the UNESCO World Heritage Sites that tourists from all over the world can visit. Feeling the awe of the awe-inspiring ancient metropolis and walking its streets makes you feel like you are stepping back in time.

In addition to being a century or two north of Bangkok, the Historic City of Ayutthaya in Thailand also has a beautiful attraction that is home to hundreds of years old sacred temples and palaces. Located in the Chao Phraya River valley, this historic site was established in 1350 and was once the center of global trade and commerce, and it was home to over one million people.

In 2013 Ayutthaya was placed on the list of the UNESCO World Heritage Sites that tourists from all over the world can visit. Feeling the awe of the awe-inspiring ancient metropolis and walking its streets makes you feel like you are stepping back in time.

Ayutthaya was chosen as the capital city due to its strategic location: It was surrounded on all sides by rivers and artificial canals, which served as natural defenses against Burmese invasions. The inner city’s northwestern corner is home to the Royal Palace and Royal Chapel, the spiritual and political apex of the kingdom.

In the Ayutthaya Historical Park to the east of the Royal Palace, there are four remarkable temples dating from the Early Ayutthaya Period (1350-1529). Those staggering sandstone prangs, rising in the classic Lopburi-Khmer style, can be found amongst the trees and clusters of ruins here.

A number of temples and ruins may also be found across the river from the inner city, in addition to the outer perimeter of the inner city itself. Among the many temple ruins in Ayutthaya, Wat Na Phramen is the only remaining temple that has survived post-war looting and fire, while temple ruins farther east include Japanese, Dutch, English, Chinese, Portuguese compounds.

On a near-island formed by the confluence of the Chao Phraya, Lop Buri, and Pa Sak rivers, the city was founded by Ramathibodi I at the beginning of the 14th century. During the history of Ayutthaya, the state was one of the most powerful in Southeast Asia, and it is believed that the modern Thai state can be traced back to its founding.

Many traces of the Thai civilization are scattered throughout present-day Thailand except for the far east and far north and along the Bilauktaung and Dawna ranges within a territory that now constitutes southeastern Myanmar. In its height, the town likely supported hundreds of thousands of residents and was known as Krung Kao (the ancient capital).

The architecture, art, literature, and most of the artifacts of Ayutthaya, which had existed since ancient times, were destroyed in 1767 when Myanmar’s army of Hsinbyushin destroyed the city. Thon Buri, located in the south of Bangkok, on the other side of the Chao Phraya river, established a new Tai kingdom.

Besides being crossed by many canals, many houseboats and other boats fill the waterways. Pagodas and impressive spires can be found everywhere. One of the well-known temples on the holy grounds of the Wang Luang (Ancient Palace) was Wat Phra Si Sanphet, a monastery associated with a royal relic covered with 375 pounds (170 kg) of gold.

Ayutthaya also has the Chantharakasem (Chandra Kasem; Front Palace), located on the Pa Sak River, along with the Wang Lang (Rear Palace), on the site of a former royal garden. One of the world’s largest seated images of the Buddha is found in the monastery at Phra Mongkhon Bophit sanctuary inside Chedi Sri Suriyothai, a monument to a famous queen who died in battle saving her husband. In addition to its massive elephant kraal (walled enclosure), Ayutthaya also has a royal pageant held in a walled enclosure in 1903 in honor of a well-known poet.

Besides Bang Pa-In and Nakhon Luang, other nearby ancient towns have beautiful palaces. Among the magnificent ruins of the ancient site is a modern town connected by roads, rails, and rivers with Bangkok and the site of Ayutthaya Agricultural College. The town manufactures several products, including cement, paper, timber, electronics, and chemical products. One of the most important sources of income in Thailand is tourism, and this place is not the only one. 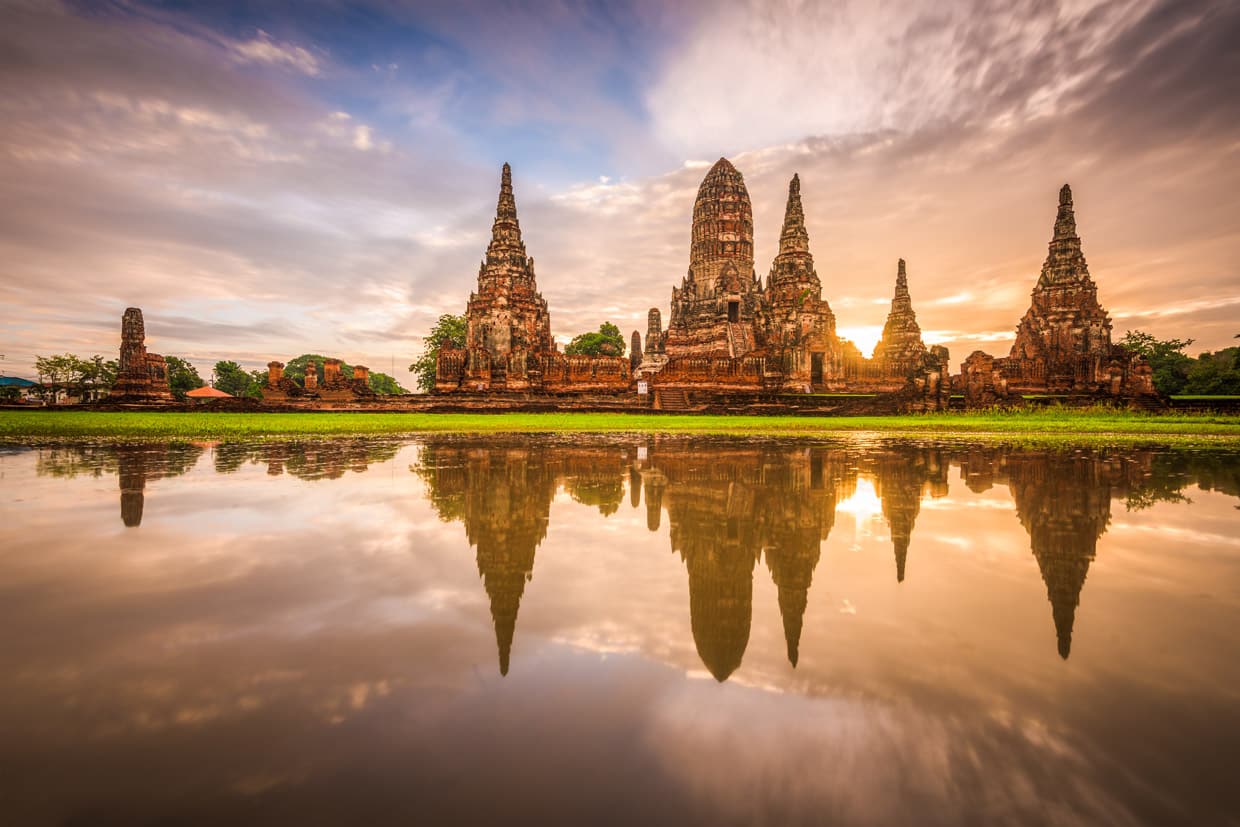 Buddha’s Head at Wat Mahathat: Ayutthaya’s most popular icon is the Mahathat Buddha’s Head, which stands beside a wall of the Viharn Lek (small chapel). In recent years, this famous – and not to miss – tourist attraction has grown to include the head of a lone Buddha ensnared by overgrown Banyan tree roots.

This former prang (gone now) stood directly in the center of Ayutthaya city, where a miniature casket containing the Buddha’s relics was buried 17 meters deep. Currently, the casket can be found at the Chao Sam Phraya Museum. 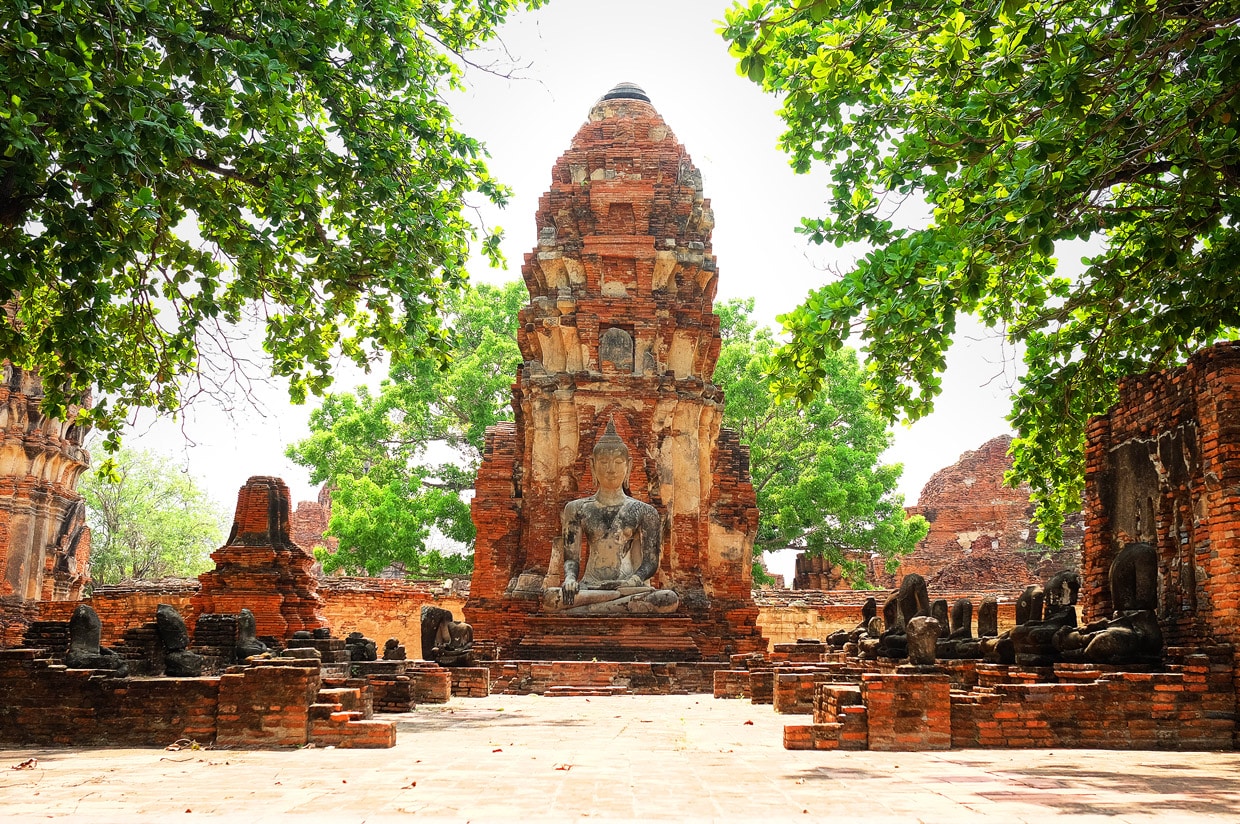 The complex was constructed during the reign of Somdet Phra Chao Prasat Thong (1629-1656) and is located on a landscaped lake that is surrounded by beautifully landscaped gardens. Rebuilt in an eclectic style, blending European and American neoclassical and Victorian architecture with Early Ayutthaya and Chinese palace styles, it was abandoned after Ayutthaya fell.

Located in the former Ayutthaya city, the “King’s Temple” is the best-preserved ancient royal temple. The temple’s largest Buddha still is a reclining figure, and its bell-shaped chedi represents the victory against the Burmese. 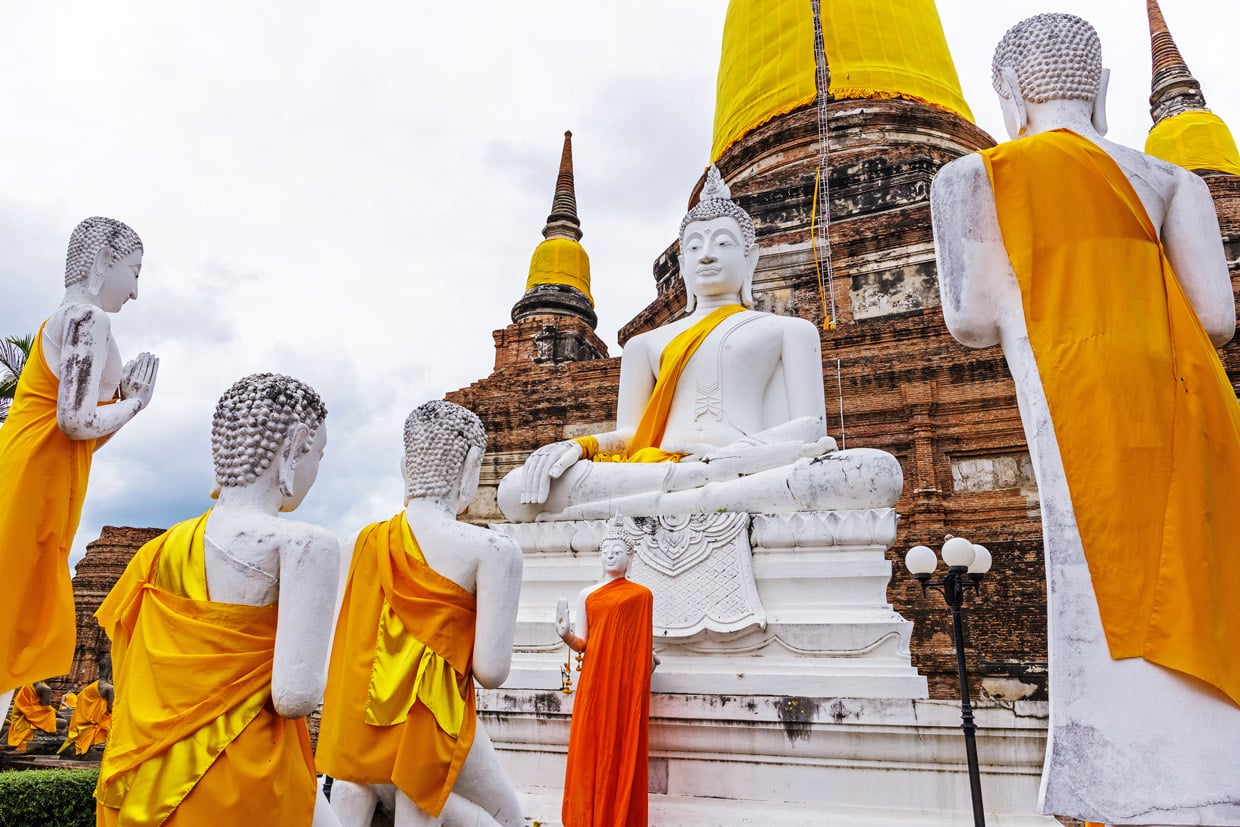 A large bronze image of the Buddha, Phra Mongkol Bophit, is housed in this standalone chapel. It is located south of Wat Phra Si Sanphet. During the Burmese occupation, it was looted and burned, then restored to its original glory in 1956.

During Ayutthaya’s fall, it was the only temple still standing, for it was used as the Burmese military’s headquarters. Within, it is decorated in the signature style of the Late Ayutthaya Period that reflects the beauty of a Buddha image fully dressed in regal attire. Among the unique architectural features of the chapel are its hand-carved wooden gable and windows with blusters, representing a distinctive architectural style of the time.

During the period from 1350 to 1448, the royal palace and temple jointly occupied extensive grounds within those walls. Among the few remaining structures in the temple grounds, which itself is an important ruin site, are the iconic chedis – each housing the relics of three Ayutthaya kings. 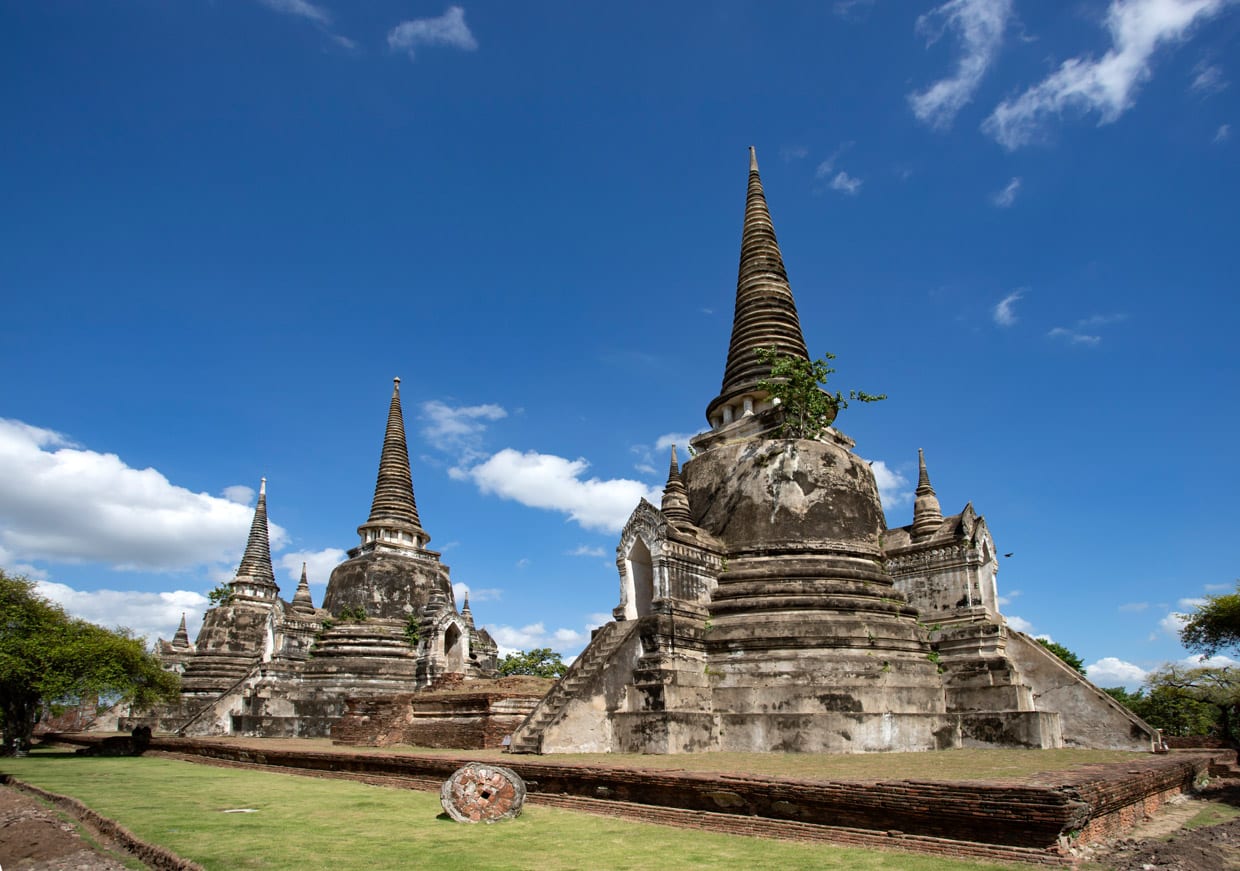 Standing across the river from the inner city, the temple’s principal pagoda is clearly visible. It was built during King U-Thong’s reign (1351–1369). A good example of local art is seen in the paintings on the walls painted by Thai artists in the Late Ayutthaya Period and replicas of Buddha’s footprints located inside an old chapel.

This temple, which existed long before King U-Thong founded the Ayutthayan Kingdom, houses a Buddha image with roots dating back to 1324 and one of the most ornate shrines in China dedicated to the Queen of Ayodhya. Chao Sam Phraya National Museum: Almost all of the ancient bronze objects came from these excavations, including gold ornaments, wooden door panels, and bronze images of Buddha.

This royal temple is situated across from the inner city and is one of the elaborate representations of Mount Meru. Symbolizing the center of the cosmos, the primary prang was modeled after the Khmer prangs, while the surrounding chedis represented the four continents and the outer world. Chedi is a pair of huge Buddha images set in a wooden frame and decorated with intricate relief patterns on each corner. 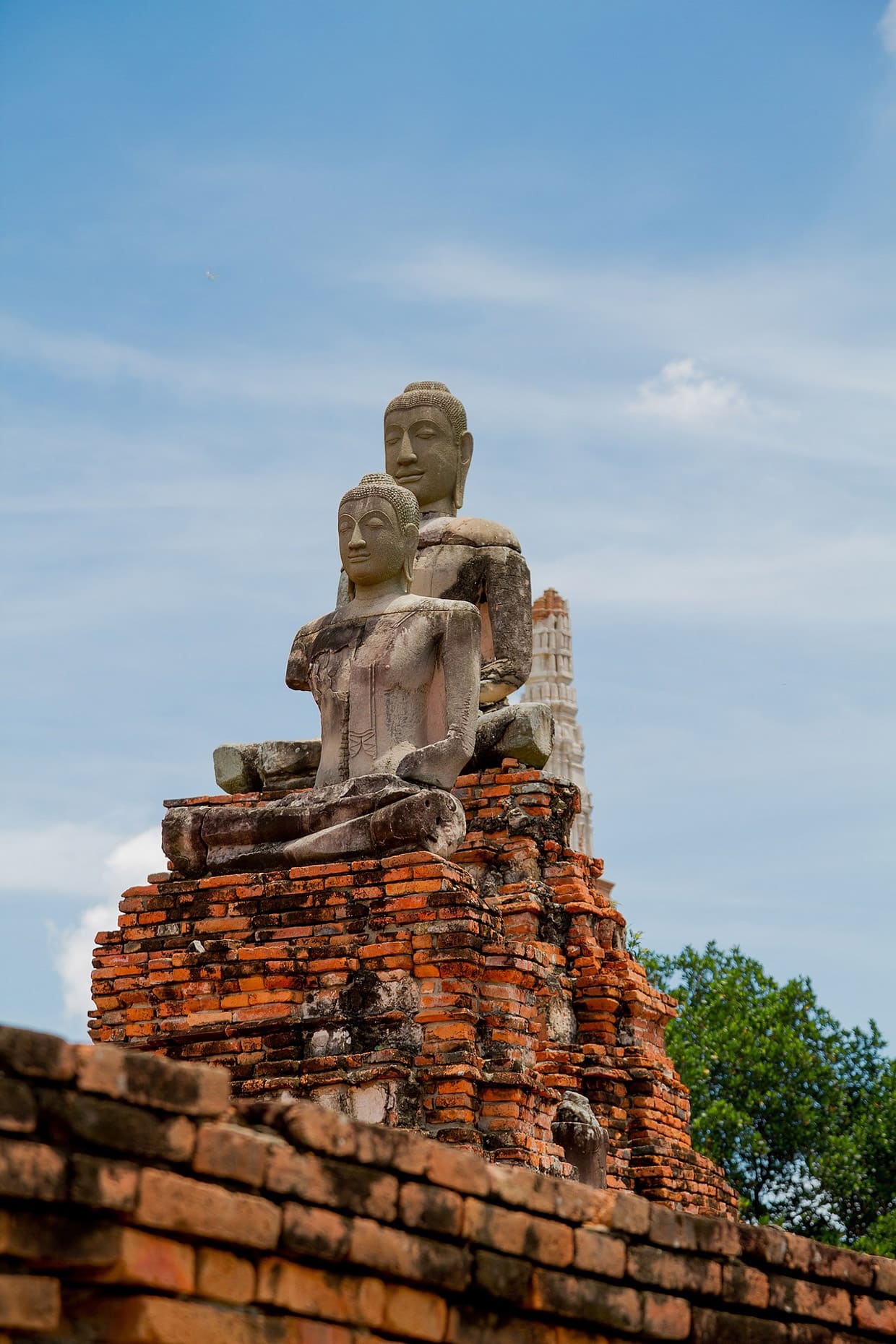 Thailand’s second most populous city, Ayutthaya, is about 76 kilometers (one-hour drive) north of Bangkok. If you prefer, you could enlist the services of a taxi driver (for the day) or book one of many tours available from travel companies in Bangkok.

To avoid the crowds, take the train from Bangkok’s Hua Lamphong to Bang Pa-In, the eastern entrance of Bangkok’s inner city. You will need to hire someone local to get to the various ruin sites and places. From Bangkok, you can also reach Ayutthaya by boat. You can arrange a river trip with many tour operators.