Alexandria is a Mediterranean port, and the third largest city in Egypt, which used to be a lighthouse, classified Seven Wonders of the Ancient World. The city founded in c. 331 BC by Alexander the Great, king of Macedon and leader of the Greek League of Corinth, during the conquest of the Achaemenid Empire.

Perhaps a few cities around the world will match Alexandria’s historical significance. Alexandria (Arabic: الإسكندرية al-Iskanderiyya) was established by Alexander the Great on the Mediterranean coast in 322 BC, and soon became Egypt’s capital under the Ptolemaic period. It is the largest and also a major seaport and industrial area in Egypt.

Among ancient civilizations, Alexandria stands tall among its cities. It had luxurious palaces and temples, as well as the most recognized library in the ancient world. There are many things popular in Alexandria, like the Pharos and the lighthouse. The lighthouse is still regarded as one of the 7 Wonders of the Ancient World.

Alexander the Great established Alexandria in 331 BC. His idea was to establish a massive Greek city along Egypt’s coastline to display his repute to those who passed through it. In Alexandria, he saw the possibility of constructing a canal to the island of Pharos, which provided two natural harbors. The city of Alexandria was designed to serve as a connection between Greece and the Nile River. Nonetheless, Alexander abandoned Egypt a few months afterward; the city was established, and he never decided to revisit there throughout his lifetime.

The emergence of Rome correlated with the fall of the Ptolemies in the 2nd and 1st centuries BCE. Alexandra played a crucial role in the deals that resulted in the creation of imperial Rome. Origen was one of many Bible scholars and theologians of the early Christian period who completed his schooling in Alexandria.

Under the concern of Constantine, Alexandria entered a new era. Following the collapse of Rome, the Byzantine Empire rose to prominence as cultural and military power. Constantine’s approach against the different faiths of the Empire is what he is cherished for today. He supported both the Roman and Christian religions.

The Sassanid Persians conquered Alexandria in 619. While it was reclaimed by the Byzantine Emperor Heraclius in 629, it was captured by Arabs in 641 throughout the Muslim invasion of Egypt. The Ottoman Turks captured the town following the Battle of Ridaniya in 1517 and managed to remain under Ottoman control until 1798. Alexandria lost a great deal of its prominence to Egypt’s port city of Rosetta between the ninth and eighteenth centuries.

Places to Visit in Alexandria

This citadel, which resembles an impressive fortress, was constructed on the site of the iconic Pharos Lighthouse to defend the town from incursions. From this fort, you get a fantastic view of the town, Eastern Harbour, and a neighboring fishing port.

Mamluk Sultan Qaitbey constructed Fort Qaitbey in 1480 on the remains of a lighthouse, which stood high above Eastern Harbour. A variety of spots to explore have been renovated, and the walking nearby is just delightful. To the west is the Ras al-Tin Palace, constructed for Muhammad Ali in 1834. King Daruq was relinquishing the throne at Qiatbay before departing from this place in 1952 for exile in Italy. 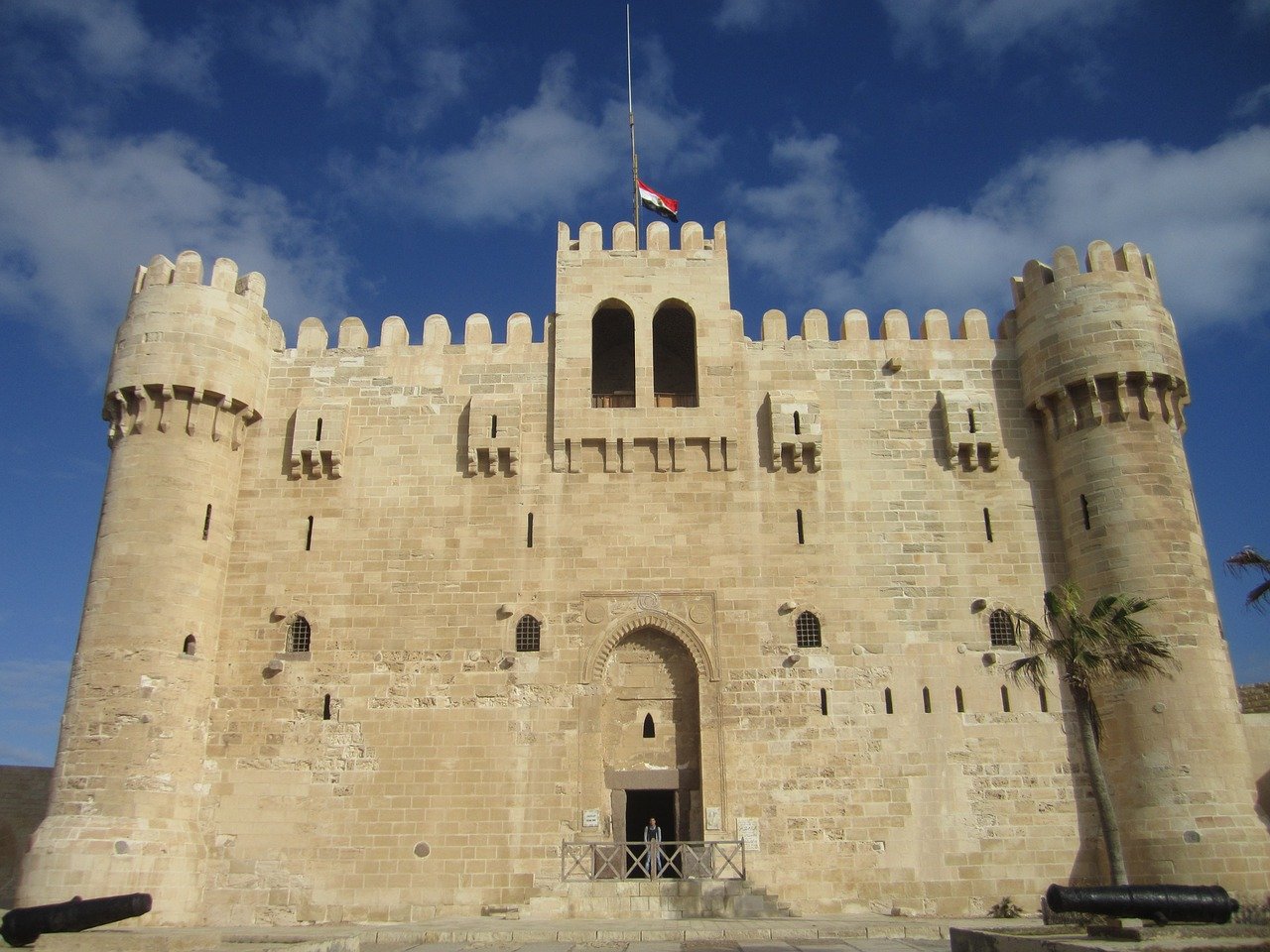 The Lighthouse of Alexandria

The famed lighthouse, the Pharos of Alexandria, which remained on the eastward edge of the island of Pharos, was the legacy of classical Alexandria. Standing taller than 100 meters, it is said that the lighthouse is among the Seven Wonders of the World to this day.

It was operating for some 17 centuries. Despite that, it was mostly devastated in the earthquake of 1303 and brought down for years. Following A century, Qaitbey fortified the harbor. Egypt considered converting the remains from Pharos into an “underwater museum.” Consequently, visitors can appreciate the historical wrecks of the lighthouse. The exterior bricks and stones around exterior walls are likely to be pieces of the lighthouse used to stand here. The nearby seabed hosts other ruins from the ancient formation.

The antique library of Alexandria used to be among the most valuable of any classic institution. The new Bibliotheca Alexandrina succeeded in replacing it despite appearing to be a daunting challenge. The complex has evolved into one of Egypt’s most important cultural centers, serving as a showcase for a variety of foreign performers and housing several outstanding museums. The library is certainly not possessing the 8 million books it was built to hold, yet it is a stunning structure that represents one of Egypt’s most important cultural centers.

This natural structure is constructed in the shape of some extensive angled discus lodged in the earth. It appears to rise from the Mediterranean Sea as a second sun. Additional to the main reading room, there are four unique libraries. There are a children’s library, a young adult library, a digital library, a library for the blind, and a plethora of other places to visit there. An extensive list of exhibitions, conferences, and permanent museums, as well as a planetarium, can be found in this space.

The Montaza Palace Gardens are situated on Egypt’s north shore, on the eastern edge of Alexandria. With expansive landscapes of the Al Montaza Gulf, the complex extends more than 145 hectares. The five swimming beaches in the complex include Aida, Cleopatra, Vanessa, Semiramis, and the Helnan Palestine Hotel’s private beach.

Khedive Abbas II, a sibling of King Farouk, constructed this palace at the turn of the twentieth century for when the weather becomes too hot. Turkish and Florentine designs combine in this palace. Florence’s Palazzo Vecchio influenced the building’s main tower.

There’s a lot to do and see in Montaza. A boat cruise can be a fabulous idea to observe the gardens from the water. Swimming, waterskiing, snorkeling, or relaxing by the ocean are all great activities at sea. Many greenhouses with a great array of plants, as well as the lush park and semi-private beach, are famous spots to chill in. 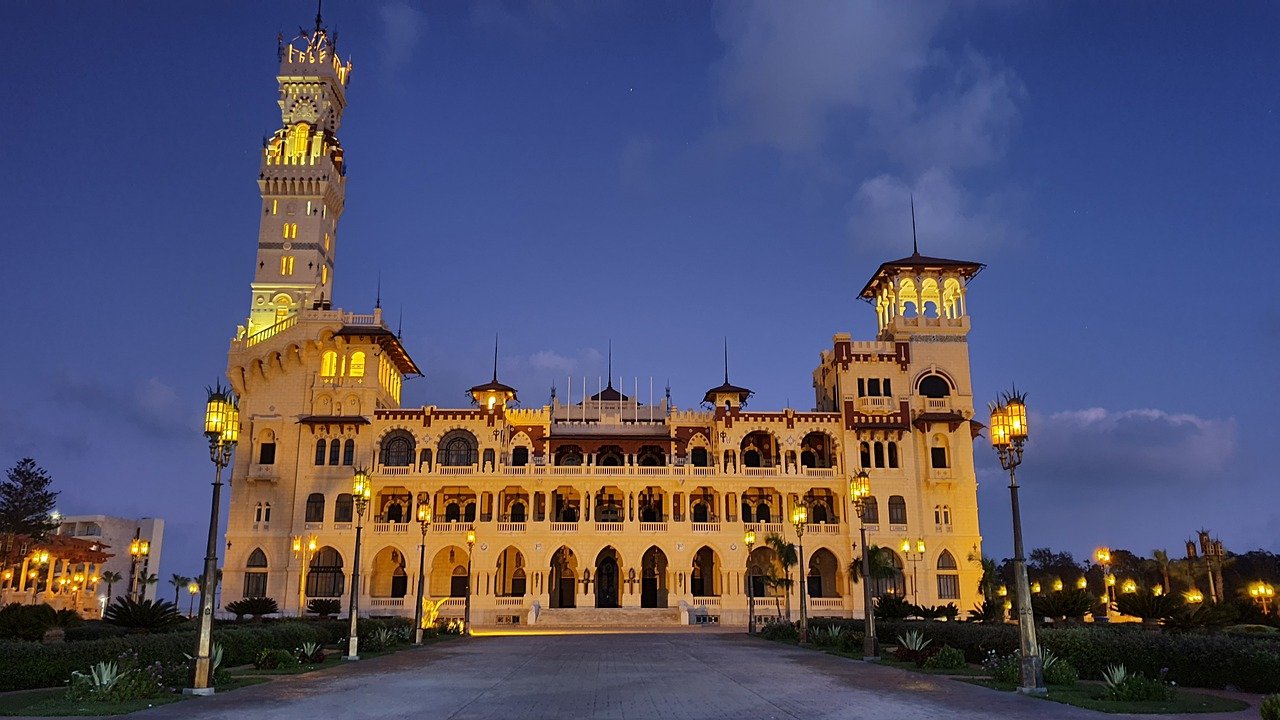 Four tombs are situated in the cemetery, all of which date from around the 2nd century BC, and are intricately adorned. Two of them appear to be in good condition, but unfortunately, the other two are completely devastated. The overall shape is hardly observable. The name comes from one of Egypt’s biggest political legends from the twentieth century, Mostafa Kamel. A famous quotation attributed to him reads: “If I wasn’t born as an Egyptian, I’d like to be one.”

This wonderful Museum offers a comprehensive overview of Alexandria’s past. This beautifully preserved Italianate villa, which contains a minimal but outstanding collection of amazing art, plays a vital role in connecting the city’s past from ancient times to the present.

The pharaonic era is represented on the underneath floor, with statues found in the Eastern Harbour located on the first floor and the Coptic, Islamic, and present-day Alexandria on the upper floor. The collection of the Alexandria National Museum includes a sphinx, a small figure of the Greek god Harpocrates, coins, Ottoman weapons, and jewels.

Get a feeling for the Mediterranean shores by walking along the Corniche! This place features three kilometers of waterfront walkways lined with restaurants, markets, and historic sites. It extends from the west end at Qaitbay Citadel to the east end at Montaza. Taking a rest in the Corniche is the best thing to do after seeing the historic sites and museums.

Due to its popularity, expect a heavy traffic flow unless you are planning to cycle.

Yet, your luck hasn’t run out. Because the Corniche passes through the Mediterranean, it provides stunning views of the water while stuck in traffic.

Other Museums of Alexandria

Additionally to the Museum mentioned above, there are still plenty of Alexandria Museums, each holding distinct aspects of the history of Egypt. If you are a fan of museums, it is recommended to spend some time in Alexandrian museums. Mahmoud Said Museum, Greco-Roman Museum, Royal Jewellery Museum, Cavafy Museum, El Kobba El Samaweya, and The Fine Arts Museum are among them.

At Alexandria, the temperature range is wide. In contrast to the desert hinterland, Egypt’s coast is battered by a northwesterly blast. The Mediterranean atmosphere creates a very different climate in Alexandria from that in North Africa. Most of the year is pleasant, except for a few hot weeks during the summer, with a minimal amount of rain. The warmest periods are August, July, and September. When temperatures reach 31C in August and July, the humidity will be high, too. January, with an average climate of 18 C, is the most chilling period of the year. 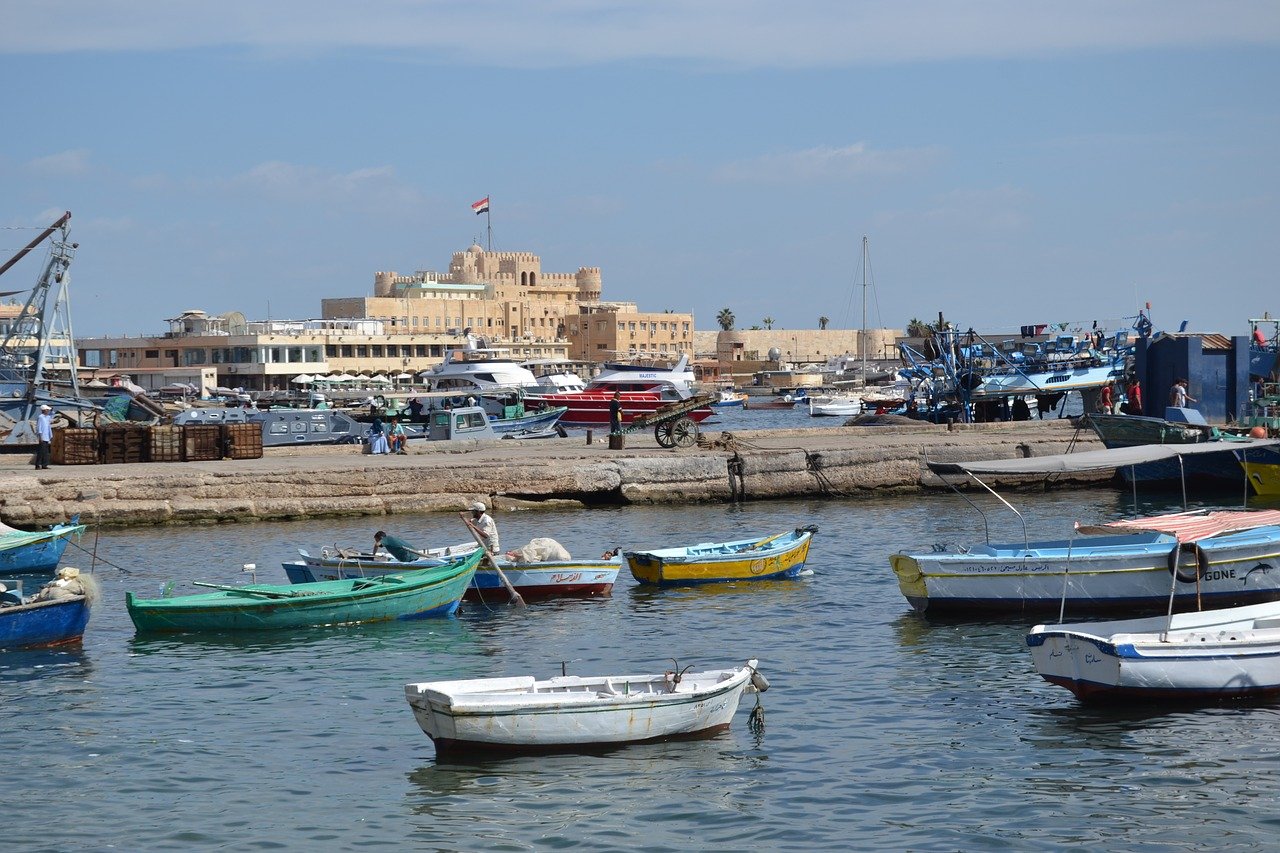 The Best Time to Visit

The best time of year to be in Alexandria is late September to the beginning of November, March, and April. Egypt becomes overcrowded when it is between November and February. Tickets and hotel prices increase during this period. You can avoid these months if you do not like the crowd.

Buses and trams are the least costly and most popularly used public transportation in Alexandria. Passing over the Corniche is easily done via the Ramleh Line. The daily tram fares are about 0.60 USD. A bus ticket usually costs between 0.60 USD and 1.80 USD.

Taxis are essential for getting around central Alexandria quickly. However, as a tourist, you may want to consider a little point. Most Alexandrian taxi drivers do not use meters, and you should reach an agreement on a price before you proceed. It’s quite common to ask drivers to act as local guides for the day (or even the entire week) for a fee. Many locals would gladly accept payment, so expect to spend approximately more than 100 USD a day for the allowance.

Some travelers prefer to plan their travels independently. For those travelers, renting a car is always an option. In Alexandria, many companies offer car rental services. If you do so, remember that the way of driving is different for Egyptians. So drive carefully, and it’s not going to be a problem. Note that renting a car might cost about 140 USD. 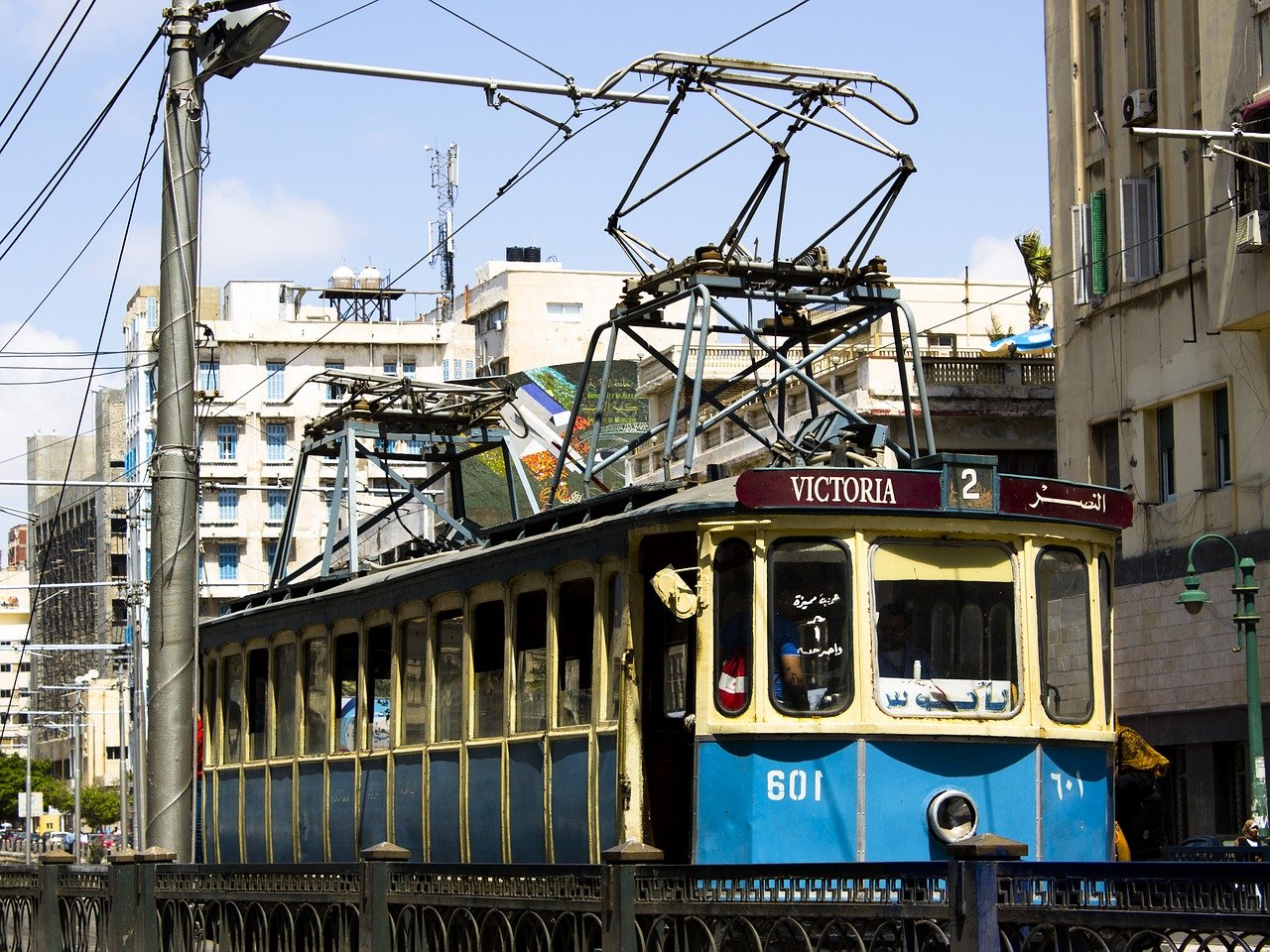 You won’t have any problem finding a place to stay in Alexandrina, the second biggest city in Egypt. You can choose between a budget hotel, mid-range hotel, luxury hotel, family-friendly hotel, or romantic hotel, depending on the money you want to spend. Almost all of these hotels are pre-bookable and offer amazing facilities like restaurants, free wifi, ocean view, and bars.

There’s no need to worry about eating, either. Many restaurants are located in Alexandria and offer Egyptian and international food (Middle Eastern, Mediterranean, Greek, etc.). You can go to a mid-range or a luxury place, according to your budget. Remember that street food is an interesting option either.

Cultural Treasure of the Silk Road