The Bell Tower of Xi’an

Bell Tower of Xi’an is at the intersection of four streets that are East, South, West, and North. The tower has a square base that covers 1,377 square meters (14,820 square feet). It also has a height of around 40 meters (130 feet). This tower is the most preserved and the most giant bell tower since ancient China. Now, let’s get more familiar with the Bell Tower of Xi’an

Bell Tower of Xi’an was constructed in 1384, during Emperor Hongwu’s 17th year of reign. Initially, It was situated in the north of West Street, at the Yingxiang Temple of Guangji Street, facing the Drum Tower of Xi’an. That was around 1,000 meters (1,082 yards) further from its current location. At that time, here was directly opposite the south and north city gates in the center of the city. The Chang’an City expanded during the early Ming Dynasty era and because of that, the city center slowly moved toward the east.

This expansion of the city changed the city center which led to the relocation of the Bell Tower of Xi’an in 1582. Then, the government moved the tower around 1,000 meters (1,082 yards) toward the east of its original site. The relocation included all parts of the tower except for its base. According to history, the relocation was done inexpensively and quickly, which makes it a remarkable achievement in China’s architectural history.

Bell Tower of Xi’an was largely repaired in 1699, 1740, and 1840. Japanese bombed Xi’an in 1939, and the Bell Tower got severely damaged; however, it was restored later. Bell Tower of Xi’an has been overhauled five times after the foundation of the People’s Republic of China. In 1984, the tower officially opened to the public and in 1996, it became in the national key cultural relics protection unit. 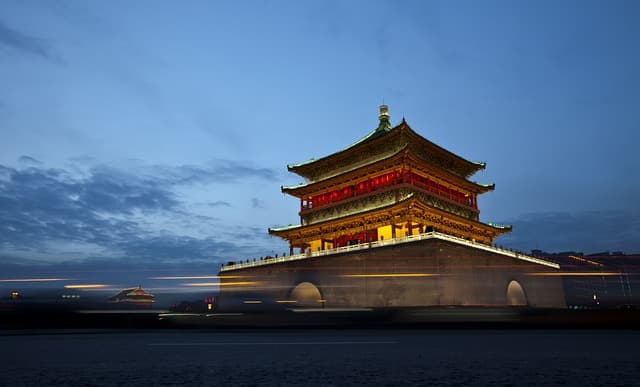 Today the Bell Tower is a beautiful place for sightseeing and it’s used as a cultural relic for tourists. In the olden times, it had a function like other Chinese clock towers. It was primarily used for reporting the time and publishing news. However, during the time, its functions gradually changed and today it is a lovely attraction in the city.

There have been other purposes for the bell tower during history. In the Revolution of 1911, the Rebels who were fighting with the Qing army were deployed here. In this tower, the first cinema in Xi’an was built in 1927 by Shilin, who had returned from the United States after studying.

The Bell Tower of Xi’an functioned as an alarm station to warn the Japanese air raids, during the Anti-Japanese War. It also has been a prison for criminals by the command of the Kuomintang. After the foundation of the People’s Republic of China, the bell tower became the stage of the parade on Labor Day and National Day.

The lower structural section of Bell Tower of Xi’an has a square-shaped pedestal alongside a masonry structure. The base has a two-story wooden structure, and the surface is built of blue bricks. The building features a height of about 36 meters (118 feet), which 8.6 meters (28 feet) of it is the base. The whole construction area is around 1,377 square meters (14,821 square feet) while each side of it is approximately 35.5 meters (38.8 yards) long.

The general architecture of the Bell Tower is related to the Ming Dynasty style. The top section is called the Golden Top because of the gold-platinum used in the inner heart of the wood. Dark green glazed tiles cover the roof while gold paintings decorate the inside. Window and door carvings of the Bell Tower are both exquisite and sophisticated. They show the decorative arts of the Ming and Qing Dynasties.

You can see some holes In the middle of the pedestal which intersect each other with a cross of around 6 meters (19.5 feet). These were the passages that pedestrians and vehicles passed through in the past, but today they are no longer used. Today, there is only a pedestrian passage underground. 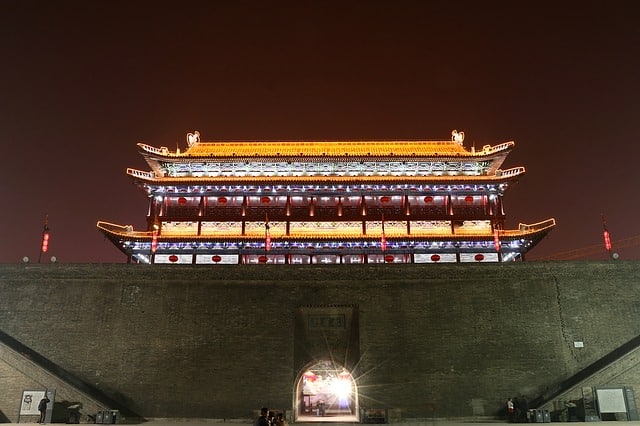 The Jing Yun Bell was the original clock of Bell Tower that was used during the Tang Dynasty in the year of Jing Yun. Initially, it was used in Jing long Temple located in Chang’an City, which is the current West Street in Xi’an today. During the early Ming Dynasty, It was moved to the Bell Tower.

In 1953, Jing Yun bell was moved to Xi’an Beilin Museum and today it is on display in Dongting. Because of its crucial role in the integrity of the Bell Tower, a replica was built and installed in the tower resembling the original one. It is located on the base of the tower, on its northwest corner. 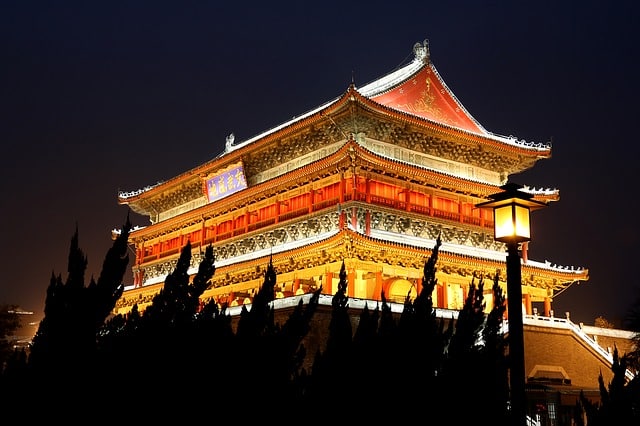 How to Get to the Bell Tower of Xi’an? Ticket?

Get on Metro Line 2 and leave at Bell Tower Station.

To visit the Bell Tower of Xi’an, you will need to pay a ticket fee of 30 Yuan. The same price applies to the nearby Drum Tower, but if you plan to visit both, you can buy the 50 Yuan discounted ticket.

The visit could take up to one hour.

Did you know that the Bell Tower and the Drum Tower in Xi’an are called the Sister Buildings because of their similarities?
Have you any more information to add? Leave your comments for us! And finally, if you have any plan to visit Xi’an or generally China, make sure to be informed about Tourist Traps of this country.