Peking duck, Also known to the Chinese people as “Beijing Kaoya”, the popular and delicious Beijing Roast Duck surely has a long history in Chinese cuisine, culture, and even customs. No visit to this beautiful city would be complete if you haven’t gone to the Great Wall or feast on the delicious roasted duck.

It is believed that the dish got its origin from the roast goose served during festive occasions in Europe, just like the roast turkey tradition of the US. Western people like Marco Polo brought some European customs to China and may have initially introduced the roasting poultry concept to their Chinese hosts during the reign of the Yuan Dynasty (1271-1368). Ducks have always been domesticated in China and the tasty ducks had been a brilliant substitute for a goose.

But there was another thought supported by some particular records that evidenced a much longer history of the roast duck. It dates back as far as the Northern and the Southern Dynasties from 420 to 589. Up to the Southern Song Dynasty (1127-1279), ducks were already roasted in some area around Jinling which is known today as Nanjing. When the later Yuan Dynasty moved the capital city to Beijing, they also took with them their cuisine which has made the dish famous in the city. As time progressed, the Beijing locals eventually made the dish their very own specialty.

Originally, the ducks were roasted by placing them in a conventional convection oven but the method changed when the emperors of the Qing Dynasty (1644-1911) and the other members of the ruling classes regarded the dish highly when it became a delicacy in the imperial menu. During this period, the ducks used for roasting were from a special breed called the White Beijing Duck. The new method, on the other hand, is done by suspending the ducks in an open oven over a flame. Both of these traditional methods of cooking a roast duck have resulted in the two main present-day schools of preparing roast ducks.

The first method was preserved by only a few restaurants and the most famous one is the Bianyi Fang (Convenient and Comfortable) Restaurant which was established in 1861. It serves a well-preserved and traditionally flavored Beijing Roast Duck.  While the second method is relatively popular in the city and applied with great success by the Quan Ju De Restaurant. Nowadays, Quan Ju De signifies the delicious Beijing Roast Duck to many locals and foreign visitors as well. 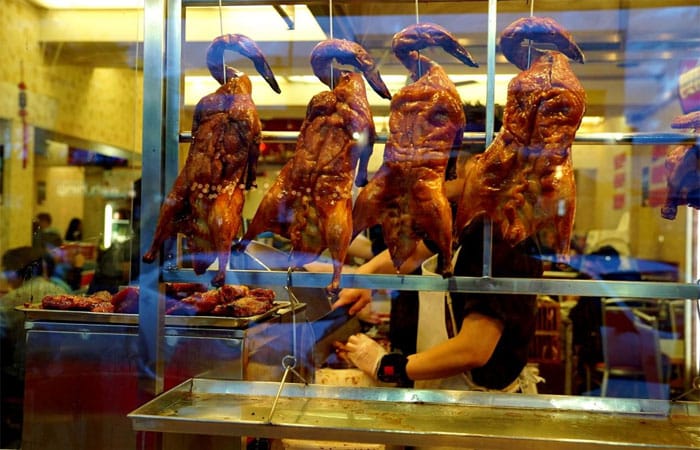 How to prepare and cook the Beijing Roast Duck

With the development of the recipe for over 140 years, flawless and precise procedures and Peking Duck recipe have been established firmly.

Other than the traditional one, most of the restaurants in Beijing serve an All Duck Banquet wherein different dishes prepared and cooked with the duck’s offal and juices are surrounding the main dish. It will definitely give your appetite satisfaction and enjoyment while dining.

Moreover, there are other points to remember when eating this dish. Spring, autumn, and winter are the best seasons to have this dish. The hot Peking Roast Duck is to be brought to the dining table by the chef himself and slice the duck into more than one hundred thin flakes. He makes sure that each piece has a little of the crispy skin. 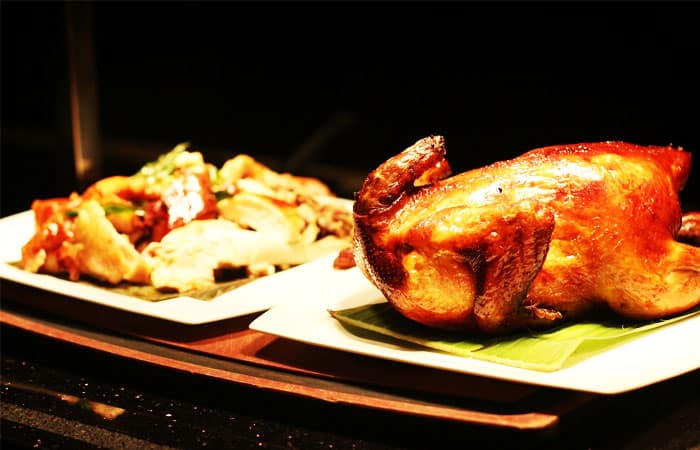 How to eat and enjoy the Peking duck

The best way to fully enjoy the juicy meat of the Peking roasted duck is as follows: take one of the little, thin pancakes given and spread it with some plum sauce, add small slices of spring onions, and some pieces of the roasted duck. Lastly, roll up the pancake and take a big bite. You will certainly be amazed by its magnificent taste!

The average cost per person when eating at this restaurant is CNY 190. Their operating hours are from 11 am to 1:30 pm and from 4:30 pm to 8:00 pm. They have branches in Qianmen, Wangfujing, and Hepingmen.

This roast duck restaurant serves its sumptuous dishes from 11 am to 2 pm and from 5 pm to 10 pm. Eating here would cost you CNY 120 to 140 per person. It also has several branches like the Xingfu street branch, Hademen branch, and the Xianyukou branch.

The average cost here is quite high at 400 per person.  It opens from 11:30 am and operates until 2:30 pm. It then opens again at 5:30 pm and closes late at night at 10:30 pm. It only has one branch at the Dongfang Square in East Chang’an Street of Dongcheng District.

This restaurant does not close after lunchtime, they operate daily from 11 am until 10 pm. If you would want to eat here, prepare around CNY 300 to 350 for each person. It has 3 branches namely the Tuanjie Lake branch, Wangfujing branch, and the Dongsishitiao branch.

The average price per person that you have to pay here is as cheap as CNY 60. That is why it is very famous among the Beijing Roast Duck restaurants because of its delicious dishes at reasonable prices. It is located at the Drum Tower East Street of the Xicheng District.

The Journey of Tanzania Wildebeests