Home » Travel Guide » Mount Rushmore – The National Memorial of The US

Mount Rushmore – The National Memorial of The US

Mount Rushmore is one of the enormous mountain sculptures by artist Gutzon Borglum. Aspects of American history were portrayed in the figures of America’s four most distinguished presidents, George Washington, Abraham Lincoln, Thomas Jefferson, and Theodore Roosevelt. It is placed in the Black Hills of South Dakota, approximately 30 miles outside of Rapid City near Keystone.

Over three million tourists from along the globe visit Mount Rushmore every year to visit this patriotic site. The magnificence of the mountain echoes in the minds of every visitor today. The four “Great Faces” in the four presidential portraits tower 5,725 feet above sea level and are scaled to men that would stand up to 465 feet tall.

Several amenities are available at the site, including the Mount Rushmore Audio Tour, a Lincoln Borglum Visitor Center & Museum, the Presidential Trail, a Sculptor’s Studio, a parking garage with RV parking, and many more. The Mount Rushmore Bookstores are located in the Carvers Café and trails, parking, pet-exercise areas, and the Memorial Ice Cream Shop.

Doane Robinson, the State Historian of South Dakota, was looking for ways to attract tourists to the state, and in 1925 he secured Congressional support for the project by enlisting the help of sculptor Gutzon Borglum and obtaining federal funding for it. On October 4, 1927, the carving began, removing tons of granite and slowly carving out the mountain. Only the heads were completed out of the original plan to depict the presidents from the waist down.

Due to the coming American involvement in World War II and the death of Borglum in 1941, the work on Mount Rushmore came to an end. Throughout the 1940s, Mount Rushmore National Memorial, now a National Monument, was regarded as an ongoing project; but on October 31, 1941, it was declared a completed project.

Four presidents’ faces are carved into the southeast face of a South Dakota mountain, a monument to American history. The beginnings of George Washington, Thomas Jefferson, Theodore Roosevelt, and Abraham Lincoln look down and remind us all that even the impossible is possible.

During the early 20th century, state historian Doane Robinson dreamt up colossal stone carvings of western heroes in the Black Hills of South Dakota in order to attract tourists. Representative William Williamson and Senator Peter Norbeck helped Robinson gain wide support from South Dakotans and Washingtonians. The Black Hills National Forest has been authorized for the carving of peaks under law. 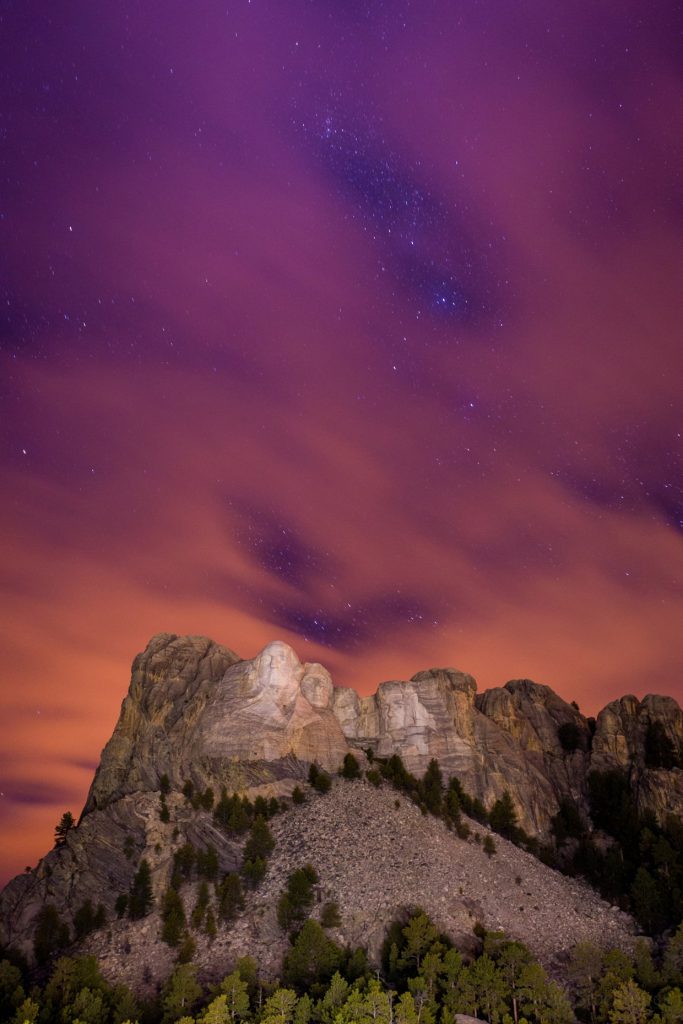 Gutzon Borglum stepped in after Robinson exhausted all other options and contacted Robinson. He agreed to come out to the Black Hills and look at the landscape and determine whether the carving was possible. “America will march along that skyline,” said Borglum to Mount Rushmore when he saw the sculpture.

Due to its southeast orientation, Mount Rushmore was favored since it would receive good lighting throughout the day. There was no other mountain in its surrounding area that had such a high peak, and the granite seemed impervious to erosion, eroding only 1 inch every 10,000 years. Robinson and Borglum picked the faces of George Washington, Thomas Jefferson, Theodore Roosevelt, Abraham Lincoln, and Theodore Roosevelt for carving into the stone.

They appointed a location and mapped out a carving plan before they started the work. The pointing system was then used to take measurements from Borglum’s plaster model. The first carving began on October 4, 1927.

Construction on Mount Rushmore began with George Washington. Washington’sThomas Jefferson took Washington’s right. It was discovered that the granite on Jefferson had grown badly cracked after two years of work, and Jefferson had to be removed from the mountain. Then he was started again on the left side of the Washington Circle.

A Brief Speech about Rushmore

July 4, 1934, was the anniversary of the dedication of Washington’s face. As a result, Borglum was able to create interest and excitement in his mountain carving. A 39 by 70-foot flag made by women from Rapid City was used to conceal the face before it was shown to the public. In 1936, the Thomas Jefferson monument was dedicated with President Franklin Roosevelt in attendance. Despite not planning to speak at the dedication, President Roosevelt was moved by what he saw and gave a brief speech.

“I had seen the photographs, I had seen the drawings, and I had talked with those who are responsible for this great work, and yet I had no conception, until about ten minutes ago, not only of its magnitude but also its permanent beauty and importance.”

A memorial to Abraham Lincoln was dedicated on September 17, 1937, one hundred fifty years after the Constitution was signed. Theodore Roosevelt was buried on November 11, 1939, the same year that modern plumbing and lighting were installed at his memorial.

The work continued for two more years on the mountain. A final touch was made to add detail. An embolism caused Borglum’s sudden death in March of 1941. The rest of the funding lapsed the next seven months, so his son Lincoln took over the project. It was time to stop carving Mount Rushmore as the presidential faces were completed as they stood.

During these tumultuous years of our country’s history, Mount Rushmore’s imposing granite face had been transformed into the likeness of four of American most celebrated presidents. A seemingly impossible transformation has become a reality. 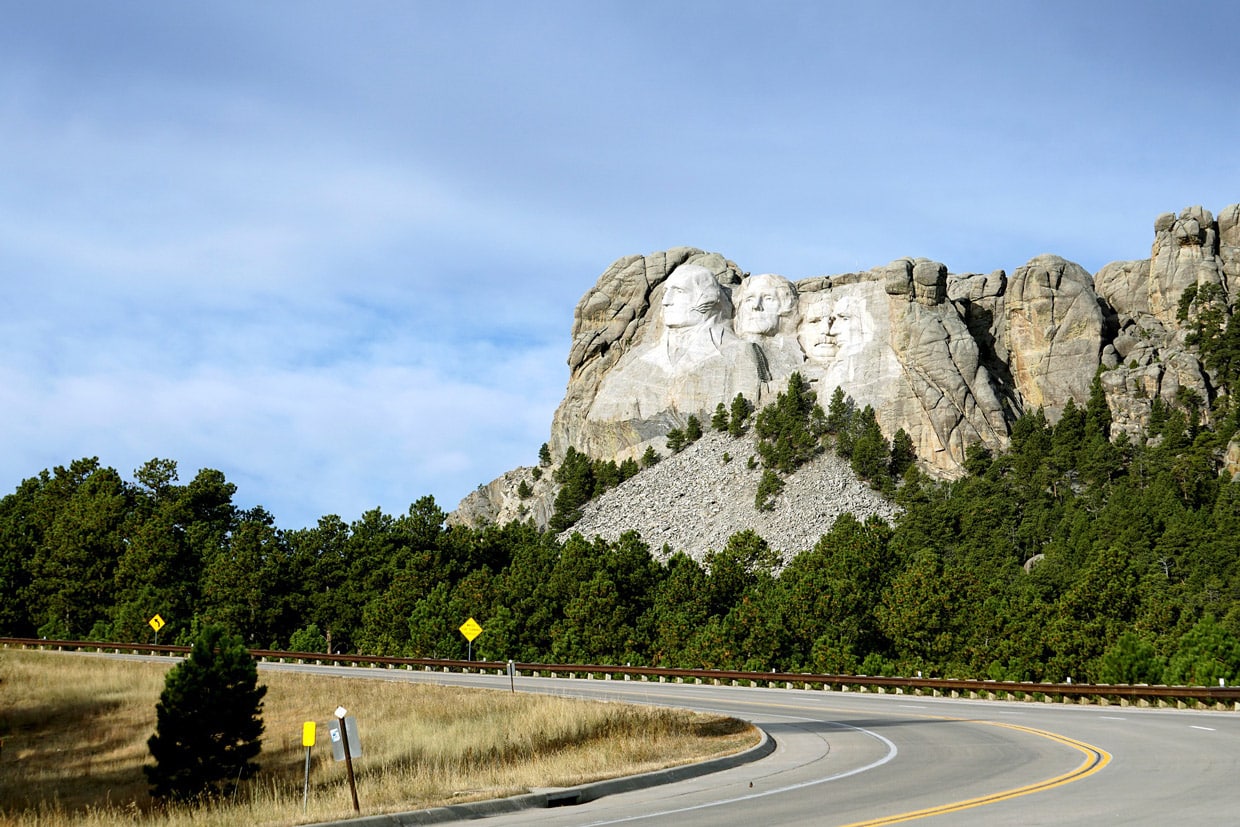 A Blast from the Past

Sculpting Mount Rushmore was a monumental undertaking of remarkable ambition and accomplishment. Over 400 men and women contributed to its success. Working in the field was both exciting and dangerous. Almost all the mountain’s surface was carved by dynamite. Usually, only 1-3 inches of rock that remained were removed by drillers using jackhammers. The stone was smoothed by handtools, and small details, like wrinkles and moles, were added.

Workers endured conditions ranging from blazing hot to bitterly cold and windy. It took them 700 stairs each day to punch in on the time clock at the top of the mountain. Despite the dangers, no one died during the project. Then in a “bosun chair,” steel cables sustained the lowering of the giants over the 500-foot face of the mountain.

Those four presidents were selected by Gutzon Borglum because, according to him, they were the most crucial moments in the history of the United States. Could another artist of the time, or maybe one of the modern artists, have made different choices? If you’ve read and understood Borglum’s decisions, think about what you might do if you were in his position.

The year of birth was 1732, and the year of death, 1799. Washington’s leadership helped the colonists win independence from Great Britain during the American Revolutionary War. The new country was founded based on his efforts, and the basis for American democracy was laid. Since Washington was so crucial as President when he was born, Borglum chose to symbolize America’s birth.

“The preservation of the sacred fire of Liberty, and the destiny of the republican model of Government, are justly considered deeply, perhaps as finally staked, on the experiment entrusted to the hands of the American people.” 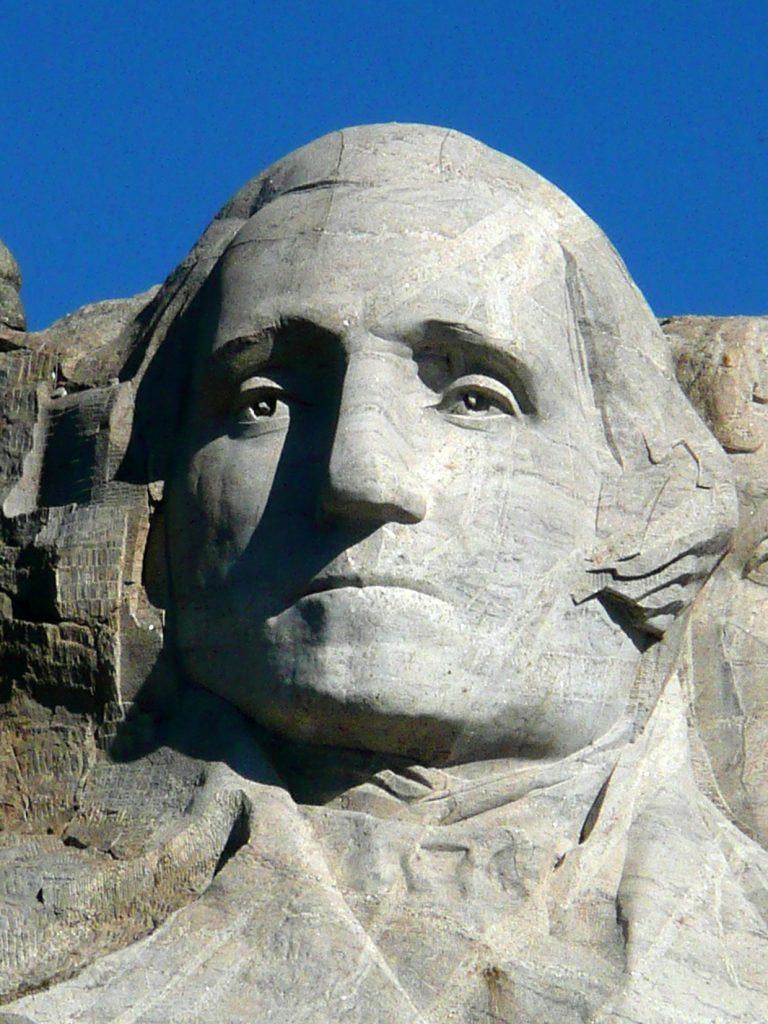 Jefferson wrote the Declaration of Independence. In 1803, he also purchased the Louisiana Territories from France, adding all or part of fifteen present-day states and doubling the size of our country. The United States has multiplied since Gutzon Borglum chose Jefferson as a symbol of that growth.

“We act not for ourselves but the whole human race. The event of our experiment is to show whether man can be trusted with self – Government.”

Born in 1858, he passed away in 1919. When the American economy experienced rapid growth at the start of the 20th century, Roosevelt provided leadership. The Panama Canal, connecting the east and the west, was constructed due to his negotiation. The abolition of corporate monopolies and the rights of working-class people made him known as “the trust buster”. Borglum selected Roosevelt to represent United States development.

“The first requisite of a good citizen in this Republic of ours is that he shall be able and willing to pull his weight – that he shall not be a mere passenger.”

The year of birth was 1809, the year of death was 1865. During the Civil War, Lincoln kept the country together as it faced its most significant test. Abraham Lincoln considered the preservation of the Union to be his most sacred duty. He firmly believed that slavery must be abolished. As a symbol of preservation for the United States, Gutzon Borglum selected Lincoln.

“I leave you hoping that the lamp of liberty will burn in your bosoms until there shall no longer be a doubt that all men are created free and equal.”

Were you aware that there’s a room hidden behind Mount Rushmore? The mountain would house a large room containing documents and artifacts that are vital to American history. It would entail drilling a hole into the north wall of the small canyon behind the faces. It would include an eight-story granite stairway beginning near Borglum’s studio, rising from the canyon mouth to the grand hall entrance. For decades, the site remained neglected due to a lack of funding, a portion of the tunnel that could not be built.

It wasn’t until 1998 that the tunnel was used to store records when a small sealed box was placed inside. The porcelain enamel panels that line the repository box contain 16 in total. Mount Rushmore is engraved with information about how it is made, who carved it, a short history of the United States, and the reasons for choosing the four presidents depicted on the mountain.

Mount Rushmore National Memorial offers various programs for digital rangers through the Digital Dakota Network. This is live ranger programming that has been transmitted by satellite. The Mount Rushmore School District and schools from throughout South Dakota can have programs together through this program. The Digital Dakota Network website has a list of programs if you would like to participate in a distance learning program. The Mount Rushmore website also has a list of programs and their descriptions and contact information.

In addition to learning how our national colors have evolved with our country and their meanings within each state flag, students will also learn the significance of the symbols within our country’s national flag.

New ideas are being proposed every day, and students will share some of their own. Students are instructed on how to develop their inventions, which can be used to seal cracks on Mount Rushmore. Also, the design will be reviewed by members of the scientific community to see if it deserves patent protection. The program is geared toward students in the third, fourth, and fifth grades.

The Weather at Mount Rushmore

As it is with other national parks in Western America, Mount Rushmore is most popular early and late in the summer. Some thunderstorms may occur in the afternoons in early summer, but late summer is dry, warm, and sunny. The fall season is challenging because of fog sometimes covering Mount Rushmore. As winter stretches from November through April, it is expected that it is cold, snowy, and long. However, what if Mount Rushmore had snow on top of it? Those elements are not something to be missed; it is worth braving them. 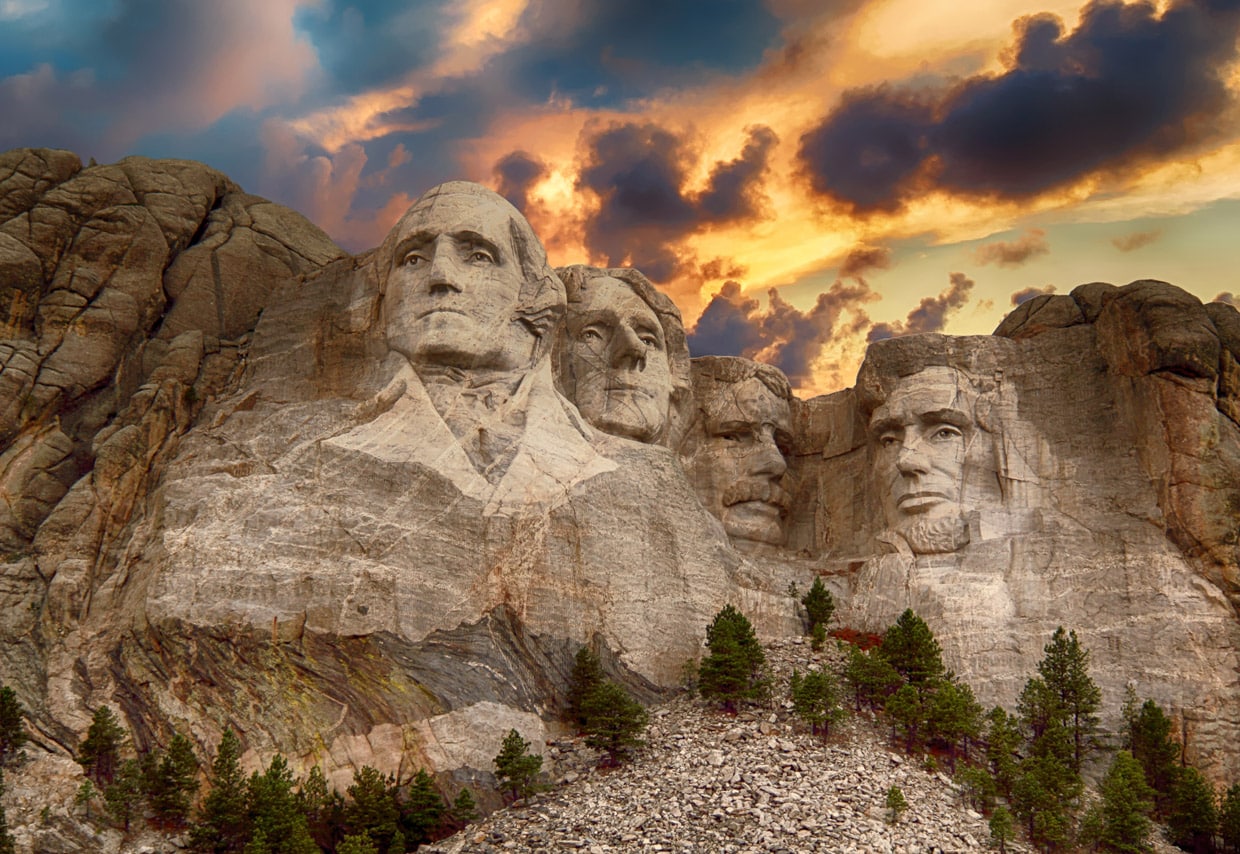 Near Mount Rushmore, there are plenty of private campgrounds, but none near the memorial itself.

While many visitors visit Mount Rushmore only to view it from the viewing deck, a trip to Mount Rushmore wouldn’t be complete without a tour or lighting ceremony that lasted from May to October.

Christmas Day, December 25, is the only day when Mount Rushmore National Memorial is closed. The parking pass is valid for one year starting from the time it is purchased. Hours of operation vary by season and are subject to change. You get discounts if you’re a senior or a military member.